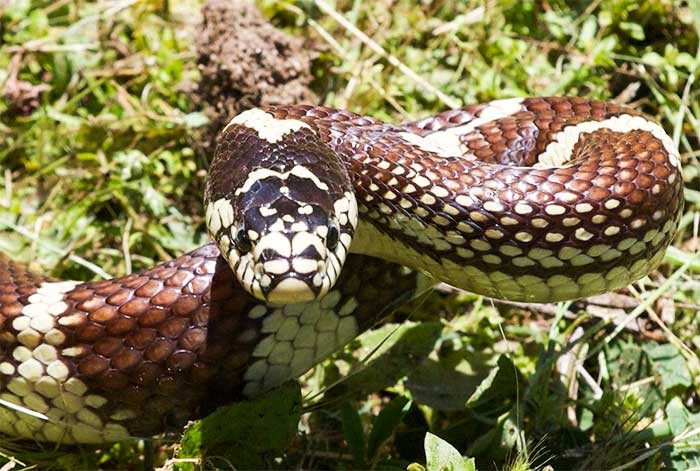 If you ever come across a kingsnake in the wild, your first reaction may be to run the other way. Often mistaken for the venomous – and dangerous – coral snake, kingsnakes like that predator cower and run away in fear. After all, it helps these non-venomous creatures stay alive.

While it’s generally good practice to leave all wild snakes alone, it’s still helpful to be able to identify these slithering creatures if you do happen to cross their paths.

These kingsnake facts will help you determine whether you’re dealing with a harmless creature, or a deadly snake.

Kingsnakes have very distinct appearances and characteristics that can help you identify them in the wild. Kingsnakes are a part of the Colubridae family, which is a large family of non-venomous snakes. These snakes are a part of the genus Lampropeltis, which means “shiny shields” in Greek. That’s an appropriate name for this species, with its glossy, defined scales.

There’s been quite a shake-up in the way kingsnakes are identified by scientists, and that’s because there have been new advancements in molecular biology. Several species that were once lumped into one species have now been identified and classified as their own species. Scarlet kingsnakes were once considered milk snakes, but is now its own species, too.

Kingsnakes are known for their vibrant appearance and patterns, which can make them a stunning sight to see in the wild. But it’s this beautiful, vibrant patterning that often gets this snake in trouble. Some species, like the scarlet kingsnake, red milk snake and the Mexican milk snake have patterns and coloring similar to the highly venomous coral snake.

When people confuse the two in the wild, they’re quick to kill these harmless scarlet kingsnakes. Kingsnakes have bright-colored skin with vivid contrasting colors. Its patterns, usually in the form of speckles and bands, makes these snakes less visible to predators, like foxes, birds and coyotes. A kingsnake’s color is usually dependent on where it’s located. As you move further west in the eastern kingsnake region, the more the coloring starts to resemble black eastern kingsnakes, which are found in Tennessee. Kingsnakes have round pupils (just like other non-venomous snakes), smooth scales, a single anal plate, rounded jaw and a spoon-shaped head.

If kingsnakes are non-venomous, how do they kill their prey? Constriction. Just like the famous boa constrictor, kingsnakes squeeze their prey to death. This squeezing action overwhelm’s the victim’s circulatory system and cuts off oxygen to the brain. The snake’s prey dies within seconds because there’s no blood reaching the brain and other vital organs.

Unlike other types of snakes, the kingsnake is an active hunter. It doesn’t lie in wait in the bushes for its prey to waltz by. Hungry kingsnakes actively seek out its dinner using their sense of smell. Once they’ve found their next meal, these snakes will grab their dinner with their mouths, and squeeze them to death. Depending on the size of the prey, kingsnakes only need to eat a few times a month. Their diet consists mostly of bird eggs, birds and lizards. In wet climate, kingsnakes may eat frogs and turtle eggs.

But there’s a delicacy that these snakes really love: other snakes.

Kingsnakes are naturally immune to pit viper venom, so they’re excellent predators of rattlesnakes and cottonmouths. As it turns out, having a kingsnake around can be a very good thing. But their appetite for snakes doesn’t stop at pit vipers. They’ll also eat non-venomous snakes, like garter and rat snakes. They’ll eat other kingsnakes, too.

Like other non-venomous snakes, kingsnakes are oviparous, which means that they lay eggs. And these eggs spend very little time inside the mother, which means they have a short incubation period. Females can lay more than one “litter,” or clutch, of eggs each season.

Mating season will depend on the climate and the location of the snakes. Kingsnakes in warmer climates mate earlier in the spring, while those in cooler climates will wait until late spring or early summer. The mating season generally runs from March until August when most other snakes and animals are mating. Kingsnakes mate just like other snakes. The females leave a chemical, or pheromone, trail that males pick up on and follow. Males will fight each other for the right to mate with females. Males will bite the necks of females while they mate.

Kingsnakes may have widespread distribution, but they tend to live in similar habitats no matter where in the world they live. These snakes prefer to live in grasslands, forests, rocky areas, fields, deserts and even suburban areas. Some species of kingsnakes prefer to live in wetter areas, like riverbanks and swamps. While they hang out near rivers and swamps, they never venture into them. These snakes are terrestrial, meaning they spend their time on land and are not considered water dwelling snakes.

Kingsnakes are a little less conspicuous than other snakes because they spend most of their time hidden under rocks, in burrows and under logs.

Just as a kingsnake’s appearance changes with its location, its behaviors also change depending on its location. Nevertheless, these snakes are nocturnal (they only venture out at night) in most parts of the United States. In areas with moderate climates, like Southern California, kingsnakes may be diurnal, meaning they’re active during the day, in the winter. It’s not uncommon to find an eastern kingsnake out and about during the day in Georgia. But when the summer temperatures heat up, you’re more likely to find these snakes out in the morning and hidden when the sun is at its strongest. If they feel threatened, kingsnakes will emit an unpleasant smell, called a musk, and vibrate their tails – just like a rattlesnake. Don’t worry, these guys aren’t venomous. This is just an example of what’s called Batesian mimicry.

With that said, kingsnakes can and do bite, although their bites are not venomous. Some species of kingsnakes are known to be more aggressive than others, but generally, kingsnakes make great pets and are pretty docile once they’re tamed. Most kingsnakes hibernate throughout the winter. They usually find a good cave, rock crevice, mammal burrow or hollow log to spend the cold season.

There are several different species of kingsnakes. Some of the most common kingsnake species include:

The scarlet kingsnake hasn’t always been its own species. Scientists for a long time have been going back and forth between the scarlet snake being a kingsnake and being a milk snake. Scarlet snakes are between one to two feet long, and their habitat ranges from Virginia to Florida and west of the Mississippi River.

The scarlet kingsnakes is the species of kingsnake that gets most often confused with the coral snake. And that’s partly because it’s found in the same regions as the coral snake. It doesn’t help that this kingsnake looks just like a coral snake with red, yellow and black bands around its body. But remember –these guys are non-venomous.

These snakes are generally found in Southern California, but they can live anywhere in the state (even tropical scrub areas) – except for the redwood forest where it’s rainy and damp. Sometimes, these snakes will be found in dry parts of Oregon or even in Colorado. The two-headed California kingsnake is rare, but they do exist. While they have a striking appearance, it’s important to remember that these guys are not venomous.

The speckled kingsnake is a colorful snake, with white or yellow speckles on each of its scales. The scales are either black or brown in color, and their speckles are usually evenly distributed. These snakes have the nickname “salt and pepper snake” because of this uniform pattern. They really do live up to their nickname. The speckled kingsnake is found in the middle of the U.S., with its habitat ranging from Iowa all the way to Texas and Alabama.

The black kingsnake isn’t really black, but it’s very close. These snakes are common in the Appalachian mountains of Tennessee. The black kingsnake ranges from four to five feet in length. While these guys are found in Tennessee, they’re also found in southeastern Illinois, West Virginia, northwestern Georgia and even northeastern Mississippi.

Again, these snakes are not completely black. They actually have white or yellow spots or bands, and some snakes also have white throats.

The eastern kingsnake, sometimes called common kingsnakes, chain snake, or chain king. They get these names because they have very distinct markings that look like chains. Like the black kingsnake, these snakes have black scales, and their chains are either yellow or white in color. Their scales are shiny, too.

Eastern kingsnakes can be found in a number of different regions throughout the eastern United States (where the king snake reigns and is one of the most common species in the wild), and the size of their bands will depend on their location. Eastern kingsnakes along coastal regions will usually have wider bands, while those in the mountainous areas will have very thin bands. Some snakes in these regions will almost look entirely black.

Kingsnakes in North America are not considered endangered – yet. Some populations in some areas are decreasing, which may be a concern in the near future. But there is one type of kingsnake outside of the U.S. that is critically endangered: the Todos Santos Island kingsnake.

Some scientists are also worried that eastern kingsnakes in Florida and along the coastal plain will become endangered soon. The reason for their dwindling population is still unknown, but some experts think fire ants may be to blame. These nasty buggers actually invade and swarm kingsnake eggs or even the newly hatched babies. I think we can all agree that the world would be a better place if we could reduce Florida’s fire ant population. You know, for the sake of saving the kingsnake.

Kingsnakes reach sexual maturity and are ready to mate by their third birthdays. Hatchlings emerge later in the summer or in early fall, depending on the climate and when the eggs were laid. The hatchlings are between four and 12 inches long. Just like other snakes, baby kingsnakes are independent from day one. In other words, mom and dad play no role in raising their young.

Sonora kingsnakes, another species of the kingsnake, is medium-sized and bright in color like the scarlet kingsnake. These snakes look like colorful rattlesnakes, and usually have red, white and black bands with black borders. As you may have guessed by the name, these snakes are found mostly in the mountainous regions of Arizona. They spend most of their time hidden under rocks and in burrows, away from unsuspecting predators. The kingsnake has bad snake-eating habits, meaning that it loves to feed on other snakes. But because they’re immune to the venom of pit vipers, they’re great for keeping the populations of these deadly snakes in check. When baby kingsnakes are born, they look like miniature adult snakes, but some have light rings that make them appear to be one solid color.

While kingsnakes are not endangered (yet), their habitats are in danger due to human encroachment (and the whole fire ants thing in Florida). Kingsnakes make great pets, and are relatively easy to care for since they thrive in so many different types of regions. These snakes are readily available, but you have to be careful where you get one from. It’s important to make sure that you buy a snake that’s been bred legally in captivity. Snakes caught in the wild are illegal as pets.