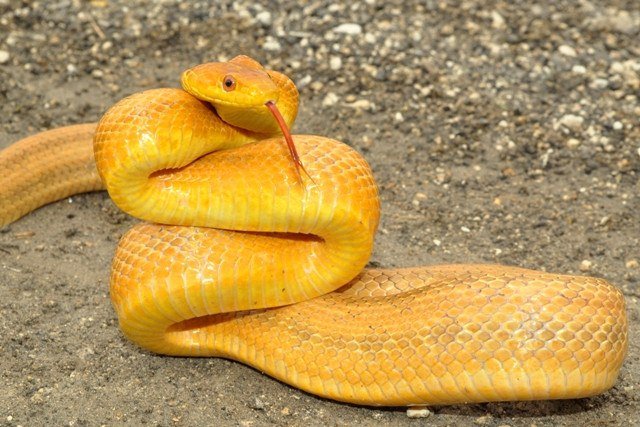 Rat snakes are as interesting as they’re beautiful. The rat snake species, despite its name, doesn’t look like a rat at all. A non-venomous snake, this species poses little harm to humans and kills by constriction.

Let’s learn about rat snake facts and what these snakes offer the world.

Rat snakes can be broken down into two different categories: Old World and New World species. When you consider the New World species, it’s important to know that we’re talking about western rat snakes. Their eastern counterparts are considered old world species.

What’s really interesting about these snakes is that they have become more complex the more we study them. Just at the beginning of the early 2000s, there was a discovery that changed the way we think of these snakes. We always considered the New and Old World species to be closely related, but now we’re finding out that the New World species have a closer relation to king snakes than they do the rat snakes of the old world.

We thought they all belonged to the Elaphe genus, one of the scientific names to categorize the species. Technology advancements allow scientists to look closer at snakes to pinpoint their relatives. With rapid advancement in the past two decades, this has led to snakes being reclassified. There are also talks to reclassify the North America rat snake to a entire new genus: Pantherophis. Ultimately, the proposal to reclassify was shot down by the scientific community.

When you think of a snake, you’ll quickly realize that they all look a lot alike. Sure, there are yellow, black, green and dozens of other color snakes, but there are also yellow rat snakes, gray rat snakes, black rat snakes and so many other colors. Color alone is a bad indicator of the type of snake you’re viewing. Sure, scientists might be able to identify a snake by appearance, but they already know the basic size and characteristics of these snakes that help with identification. But soon enough, you’ll know all of this information, too. 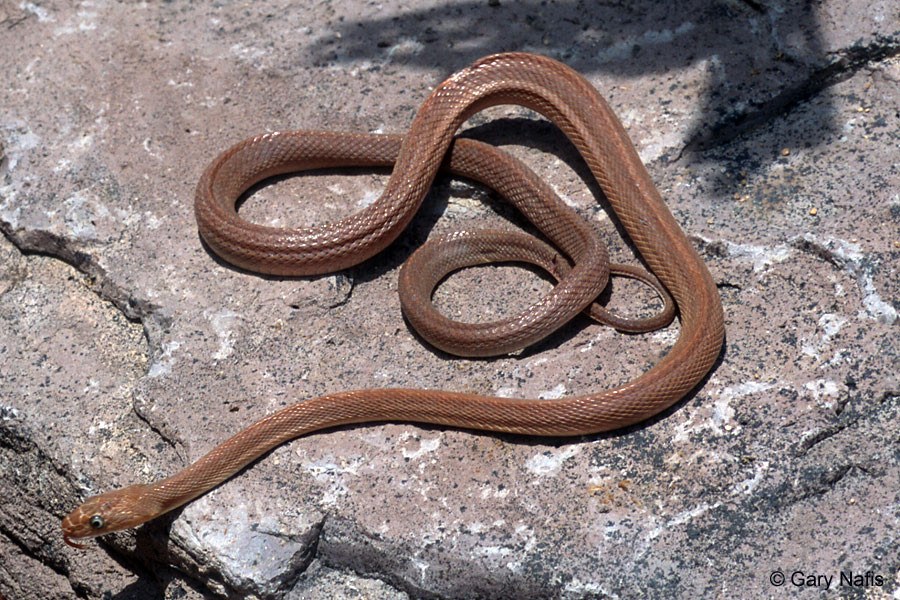 There are numerous different types of rat snakes, so a little later on, we’ll be diving into the appearance of the most common species to give you a better understanding of the snake you’re viewing. When viewing a rat snake , you’ll notice that their appearances will vary widely, with:

And these snakes will also have keeled scales, a wedge-shaped head and a rather slender body. A neat little fact you might not know is that most snakes that are not venomous will have round pupils, which is an indicator of a snake being nonvenomous. Since rat snakes fall into this category, they do not contain venom. Size is dependent on the species, but these snakes will often be between 4 and 6 feet in length as an adult. Young western rat snakes are obviously smaller in size and will continue to grow as they shed.

Generally, the range and habitats of the rat snake varies by species, so you may find one species in the North and another in the South. In general, there are three main areas where you’ll find these snakes hanging out:

But as we’ll soon see, the range is different for each species.

Rat snakes are an interesting species, and due to there being a lot of subspecies, you can imagine that they all have different behavior and habits. The eastern rat snake is known to be aggressive when cornered (most snakes are), but when not cornered, they’re primarily shy and tend to move away from humans. When these snakes are touched, they’ll emit a strong foul odor that is used to deter predators.

Rat snakes are also smart, and they know that people fear the deadly rattle of a rattlesnake. Since the rattlesnake is highly poisonous, a lot of snakes seem to mimic the snake’s rattle. When they rattle, they’re performing what’s called a mimicry, which is a good and bad thing.

Animals will ignore the snake when it does this because it doesn’t want to die, but humans will often kill the snake thinking that it is filled with deadly venom. So while most predators will stay clear of this rattle, the mimicry will cause an undue threat to the rat snake and making it more vulnerable to harm from humans. Nocturnal and preferring warm weather, they can be seen during the day, too, in areas, such as:

They may actually be seen laying in the sun trying to raise their body temperature.

When the weather is cooler or the snake feels like taking a break from normal activity, you may find the common rat snake in:

When the snakes are threatened and near bodies of water, they will often swim away quickly to avoid danger.

Constrictors by nature, these snakes will squeeze their prey, killing them and then eating them hole. While you may have heard that the prey’s bones break and it’s a terrible death, this isn’t true. Rather, the snake will constrict its prey, causing a circulatory system overload that puts the prey into a state of shock and causes it to die due to a lack of blood to the brain.

Excellent climbers, rat snakes can feed on a variety of prey, including:

The baby and young snakes may eat cold-blooded animals, but they’ll eventually adapt to a diet where they prefer to eat only warm-blooded prey. A highly interesting rat snake fact is that the rat snake is known to wait and ambush its prey. Think of a small mouse walking through the brush looking for food to eat while the rat snake hides away in the brush and stages an ambush. Snakes will also actively forage for their prey and will pounce when the opportune moment arrives. Some of these snakes also eat chicken eggs a lot. People started calling these snakes chicken snakes due to them eating so many chicken eggs throughout their lives. I’ve recently learned that the snake may hunt multiple prey before eating. Using the mouse as an example, the snake will kill the mouse and mask its scent, allowing it to easily kill other mice that believe they’re smelling a mouse when they’re really not. Then, the rat snake will go and eat all of its kill in one sitting.

The average lifespan of the rat snake is a mystery. Some sources state that they can live 25 – 30 years in captivity, with the average wild lifespan estimated to be 10 – 16 years.

The reproductive life cycle of a rat snake is rather complex. There is little incubation time, and the snake will lay eggs quickly. Snakes will lay what’s called clutches, which are batches of eggs, and if conditions are just right, the female may be able to lay two clutches annually. Mating season begins in spring when the rat snake hibernation ends. Females will let out pheromones to lure in the males who will use their tongues to get a hold of the scent and find a female to mate with.

After mating, the female will often lay her eggs in five weeks. Each clutch can have 12 – 20 eggs on average, and while they may resemble bird eggs, they’re hidden away in logs and compost piles in most cases. Eggs will hatch after two months, and when the rat snake is born, it will be 13″ in length on average.

Black rat snake identification is based off of a few details:

The largest of all rat snakes, the black rat snake is found south of Georgia and New England. You may find them in Louisiana, and they have been known to go into Wisconsin. These animals like to live in forests surrounded by grass in most cases.

Everything is bigger in Texas, and that’s a fact for the Texas rate snake, too. These snakes have an average length of 6 feet in the wild, and the color of this snake seems to vary, depending on where it lives in Texas.

A few facts about the Texas rat snake are:

If the name didn’t give it away, this snake is found primarily in Texas. Adapted to the climate, this species can live in forests, urban areas and even grasslands – it doesn’t care. While the name does include “Texas,” this snake has made its way into surrounding states, including: Arkansas, Louisiana and Oklahoma.

Yellow rat snakes are primarily found in Florida, and they have orange or yellow coloring. The snake’s irises are yellow in color, and they have four brown stripes going down their backs, too. This snake is a hybrid that’s also part black rat snake. While the yellow rat snake loves the state of Florida, it can also be found in North and South Carolina along the coast as well as Georgia.

This snake will live anywhere, including:

As you can tell, this snake really doesn’t mind where it lives.

While the name includes “red,” this is a form of corn snake. The color of this snake will be:

If you’re trying to find the red rat snake, you need to look in the southeastern part of the United States, especially Florida. These snakes can live in urban areas, but they also like mangrove swamps, flatlands and forests where they feel most safe.

Gray rat snakes are huge, and they can be as big as 7 feet in length in some areas of Canada. These snakes have dark gray blotches on their back, and they have a grayish coloring in general, their bellies also have these dark grey blotches. The largest rat snake in Canada, these snakes are often found in southern Ontario where they will venture out into grassy areas and prefer to live in the forest. These snakes are also in the United States, and can be found as far west as Mississippi and between Indiana and Florida.

We can’t discuss rat snake facts without mentioning the endangered status of these snakes. Certain species are endangered or threatened, including:

While these rat snakes may be endangered or threatened in these areas, this doesn’t mean that they don’t have larger populations in the other areas that they roam. As with all snakes, deforestation and humans encroaching on the rat snake’s habitat is the biggest threat of all.

Before you go and deepen your knowledge about another snake, a few fun facts about the rat snake are:

These fun and interesting rat snake facts will help you become an ambassador for the rat snake and teach others all about these beautiful creatures.