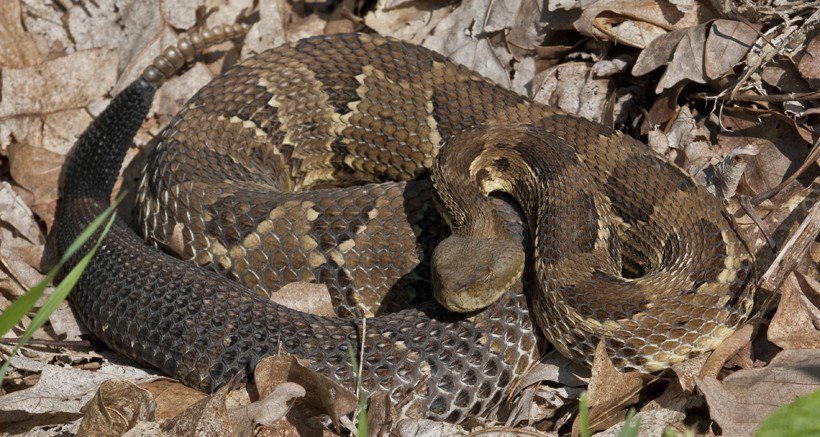 Snakes will often disappear during the cold winter months? Do snakes hibernate? In a way yes, but it’s not the same type of hibernation that you’re probably thinking about. This is quite interesting because it’s almost the same idea, but it is slightly different.

Hibernation, when discussing animals, is a time of year, during the cold seasons, where an animal and even some plants will go into a dormant state. This state is considered a very deep sleep, and the animal will stay in their slumber until the cold season passes.

If you think about it, hibernation makes a lot of sense for some animals. Bears go into hibernation because they need to conserve their energy. The food that bears need will be scarce during the winter, so they will hide away to conserve energy and lower the metabolic process.

But snakes do this for an entirely different reason.

2. Why Do Snakes Need to Hibernate?

Snakes are cold-blooded creatures, and they often sunbathe on rocks so that they can raise their body temperatures. While some sites state that the snake needs to “cool down,” this is not true. See, a snake needs to conserve their body heat if they hope to survive the winter. In cold areas, snakes can’t survive. You won’t find snakes in Antarctica.

Snakes will find good wintering locations, and they will hibernate so that they can:

Some snakes can live in the cold, and some snakes don’t hibernate at all. If a snake were to stay awake fully during this time, they would not be able to maintain their body temperature with the frigid temperature outside. Food will also be scarce, and many of the leaves and wood piles that snakes are in will not be present.

Keep in mind that the snake naturally goes into this process. When the air is too cold and the sun stays out less, the snake’s body will adapt and change, causing it to go into hibernation. But, the snakes don’t go into a true form of hibernation.

No. Yes. It’s complicated. A common misconception is that snakes hibernate, but it’s really not the case. See, the snake will go into a process called brumation. What makes this different than hibernation is that the brumation cycle doesn’t require sleep.

It’s not that the snake won’t sleep (because snakes will sleep at this time), but the sleep won’t be as intense as a bear, for example.

Instead, the snake will become lethargic and sort of stay in a state of slumber. When this happens, the snake may open its eyes, but it won’t move often. What’s amazing about reptiles is that they can go without eating for months. Regular house snakes can go weeks without eating on many occasions.

And it makes sense. If the body slows down and uses fewer resources to persist, the snake can survive much longer without food. Snakes may, on occasion, leave this state to go and drink water, but they will then return and brumate longer. The goal is to maintain the internal body temperature and resources until the outside temperature is warm enough for the snake to survive. Without brumation, many species would die.

4. When Do Snakes Brumate?

Brumation is one of those physiological adaptations of snakes. A good rule of thumb is that snakes will go into brumation when the temperature outside is too cold. A quick cold snap can cause snakes to go into brumation earlier, but they will sense when the outside air is warmer and will come out of brumation, too.

Snakes in hot climates, such as Africa, will not go into brumation unless absolutely necessary. Extreme temperature changes can force brumation, but it can also occur due to a sudden cold snap. If you’re in a region where you have all four seasons, you’ll see snakes go into brumation as early as fall and as late as winter. Brumation often occurs between the months of September and December.

Do snakes hibernate (brumate) until summer? No. The hibernation season comes to an end after a long winter sleep and average daytime temperatures begin to warm. You’ll normally find that snakes emerge from their sleep between March and April.

If, for some reason, there is a warm spell in the middle of winter, as we often experience due to global warming, the snakes will come out. While they can, the snake will go and find food, eat and return to a state of brumation when the outside temperatures become too frigid for the snake.

So, where do the snakes go to brumate?

5. Where Do Snakes Brumate?

I’ve looked far and wide, and I have never seen snakes brumate. Since we know that the snake needs to conserve its body heat, it makes sense that they will go deep into tree stump holes, rodent burrows and different depths to hide away and brumate.

Strategic, the snake will go into protected hiding spots that have little chance of wind or rain, such as:

Some snakes may be found in an abandoned construction site, or they may go deep into pipes, too. Garter snakes are an interesting species because they will go into garter snake litters, or groups, to try and keep warm. These snakes will try and huddle close so that all of their species will live through the cold winter.

While they may come out of brumation and fight shortly after, they will remain civil during this state. Male and female snakes will live together at this time, all with the goal of survival. Since there is little-to-no activity occurring, the snakes pose no threat to one another. There will often not be a daylight signal either, so the snakes will rely on the temperature of the air to come out of hibernation. Timber rattlers hibernate, as do the rubber BOA snake and the ringneck snake.

An interesting fact is that snakes may travel great distances to go to a place to brumate. The snakes know that they need to be in an optimal location when the warmer weather hits, so they will come out of their normal habitat and search out a good location to brumate. It’s actually quite strategic in nature.

6. How Long Do Snakes Brumate?

Brumation is a tricky process, and while it’s easy to say that this process is 3 months long due to the seasons, this is inaccurate. In fact, we’re finding snakes come out of brumation earlier due to warm spells. You’ll also find that during extra warm years, the snake will come out of brumation far earlier and stay out in the wild longer. I’m not sure what the snake prefers, but we can use an educated guess to assume the snake rather enjoys its time in the wild.

So, snakes will spend 4 – 5 months in brumation given a rough estimate. It’s a rather long time. Of course, in areas that are more mild, this period can be much shorter, too. We’ve seen snakes brumate for far less time – just a few months in areas where frigid temperatures only last a few months.

Snakes will often hide away at night on a normal schedule, too. A lot of this hiding has to due with the temperatures dropping at night. They may not enter into a snake ball at this time, but they will go into shelter to keep warm. And some snakes will sunbathe to get their temperature up during the daytime. The goal is to raise the snake’s temperature enough so that it’s able to comfortably survive the night without worrying that the temperature will dip too low.

7. What Temperature Do Snakes Brumate?

This is a difficult question to answer. There are so many different species and size snakes that it’s difficult to pinpoint an exact degree where brumation occurs. Out in the wild, you may see a snake when the temperature is in the mid-40s, but this is not all that common. A lot of people state 53F is a good starting point for the snake.

Snakes in colder regions seem to go into brumation when temperatures are closer to 39F – 40F, and maybe these species want to just wait out the cold as long as possible. In truth, a lot of these snakes have adapted to the colder weather, so they can withstand it much better.

8. Brumation in the Wild

Do snakes hibernate because they choose to? Not really. Snakes have no choice but to brumate – it’s life or death. When in the wild, if they are cold and sluggish enough, the snake may not even lose weight. This is a good thing because once the snake comes out of brumation it’s mating season.

That’s right. The males are smart. They know that the largest concentration of snakes will be out and about when brumation has come to an end. So, these snakes will decide that it’s time to track the females, which leave pheromones out, and mate. The mating can be a sight to see.

Snakes will often go into mating balls, where they all tangle together to try and mate with the female. And females are very unique. Did you know snakes can choose to discard sperm or store it? The snake will base this on the quality of the sperm. And she will be able to choose specific sperm she wants in the future to reproduce.

Snakes will go below the frost line to ensure that they don’t freeze to death in the wild. And there may be thousands of snakes brumating at the same location, too. Studies have found that some snake species may have a 33% – 50% mortality rate even when brumating – it’s a matter of life or death in the most sincere sense.

When in captivity, snakes are at the mercy of their owners. You can use a heated tank, and the snake will have no reason to go into brumation. But if you consult professionals on the matter, you’ll often find that they recommend a brumation cycle for your snake.

Why? It’s natural. A lot of wildlife rescue centers do the same thing. Healthy and mature snakes should brumate. The process is also helpful for breeding and is said to produce better overall sperm, too. Growth and feeding are also tied to this behavior, so if you want your snake to be as healthy as possible, forcing brumation is good.

You’ll want to test the coldness levels and lower to ensure that the snake goes into brumation. A good starting point is 53F.

Now, also keep in mind the area where they’ll be kept. The snake cannot go below the frost line if it’s kept in a glass cage, so you’ll want to make sure that the temperature is just right. I would start at 53F and slowly lower the heat day by day to find the right temperature where your species of snake will go into brumation.

Basements, wine cellars and even garages may be just the fight temperature for your snake. You’ll want to read up on your species more to allow for an accurate brumation process to occur. It should also be noted that you can make it cold enough to where the snake won’t eat, but it’s still so warm that the snake’s metabolism won’t slow down. In this case, the snake may starve to death because it refuses to eat.

Do snakes hibernate? No, they go through a process called brumation, which is very similar. Snakes need to brumate to keep their body temperature from falling too low. The snake will brumate for 4 – 5 months and will come out of the process ready to mate and expand the species’ population.