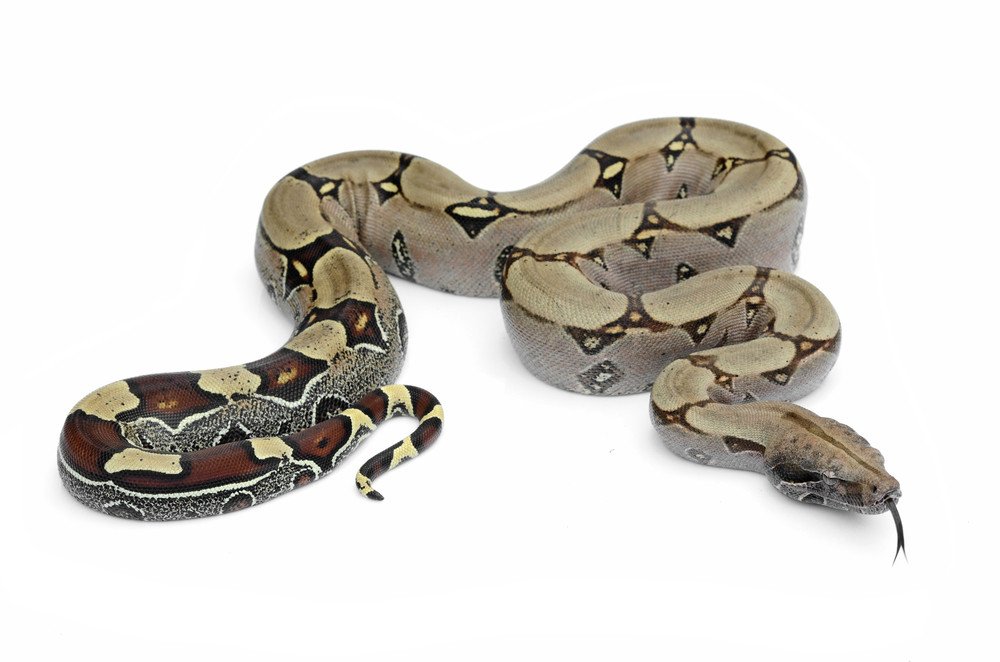 One of the most well-known types of snakes, the boa constrictor is a large snake with a heavy body. Found in North America, South America and parts of the Caribbean, this snake is a part of the Boidae family, and there are 10 recognized subspecies of this fascinating creature.

Did you know that boas are closely related to pythons and anacondas? While they’re not quite as big as their cousins, they’re among the biggest snakes in the world.

The longest boa constrictor ever on record was 13 feet long. But don’t expect these guys to be quite that long if you meet them in the wild. Most boas are between 6.5 and 9.8 feet long.

Boas are just as heavy as they are long. Some weigh more than 100 pounds. Females are usually bigger than males.

These snakes have tan or gray bodies with distinct saddle markings along their backs that become more prominent near their tails. Most boas also have marks on their heads, usually a stripe that runs from their jaw to the back of the head.

Some boas have stripes on their bodies, while others display cryptic patterns.

Like many other snakes, boas have sharp, hooked teeth to grab and hold prey. They don’t have fangs, but they can stretch their mouths open wide enough to swallow large prey whole.

And if they lose their teeth, they can regrow new ones (how cool is that?!).

Another cool thing about boas, which gives them a unique appearance, is their spurs. These spurs are actually remnants of hind legs, and they’re found on either side of the cloaca. Males usually have larger spurs than females even though females are usually bigger.

Boas also have heat receptors in their lips.

Boas are found mostly in the Western hemisphere. Their habitat stretches from North America down through Central and South America. They can also be found off the Pacific coast and in some parts of the Caribbean.

Contrary to popular belief, boas live outside of jungles. When they do live in rainforests, it’s usually along the edges or in clearings. They’ve also been found in woodlands and dry tropical deserts.

A small population of boas has been introduced in southern Florida, and there’s another growing wild population in St. Croix.

And while these snakes can certainly thrive in a wide range of habitats, they still prefer rainforests. Jungles are warm and humid and provide plenty of cover for these slithering creatures to hide.

The boa constrictor is an excellent swimmer. These guys love to hang out near rivers and lakes, but they’ll sometimes move underground to escape danger in the burrows of small animals.

The boa is a solitary creature and usually avoids other snakes unless it’s looking to mate. They’re a nocturnal animal, but they’ll come out during the day to soak up the sun when evenings are too cold to hunt.

A young boa constrictor may climb shrubs and trees to forage for food, but adult boas spend most of their time on the ground.

Boas can be aggressive when they feel threatened. Their bites can be painful, but they’re rarely dangerous to humans.

Boas in some parts of the world are more aggressive than others. Ones in Central America hiss loudly and will bite repeatedly if they’re disturbed.

And just like any other snake, boas can be unpredictable when they’re going through a shed cycle. Right around this time, their eyes turn milky, opaque or blue, which makes it harder for the snake to see and makes them easily agitated.

When they’re not shedding, these snakes have excellent eyesight.

When boas go through a shedding cycle, they produce a lubricating substance, which is what causes their eyes to become cloudy. During their shedding cycle, their skin will split over the snout and peel back from the rest of its body.

Unlike smaller snakes, boas move in a straight line. They can be slow, too, with most moving at just 1 mile per hour. 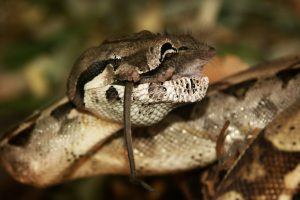 Boa constrictors are carnivores, meaning they eat meat, and they’re considered an ambush predator. These snakes hide out and wait for prey to pass by before snatching and grabbing them.

And they use their flickering tongues to pick up on the scent of a delicious meal.

While they prefer to ambush their prey, boas will actively forage if prey populations are low.

Boas eat small mammals, like squirrels, rats and even bats. Bats are one of their favorite foods, and they’ll catch them while they’re hanging in caves or from trees.

Although they prefer smaller prey, boas will eat anything they can get their wide jaws around. That includes large mammals like pigs, monkeys and even deer.

Depending on the size of the kill, it may take a boa constrictor six days to fully digest its meal. And because its metabolism is so slow, they can wait days, weeks or even a month before eating again.

Boas are ovoviviparous snakes, which mean they give birth to live baby snakes. They usually mate in the dry season between April and August. Males will mate with multiple females each season, and half of all females will breed in any given year.

Females emit a special scent during breeding season, which attracts nearby males. Males will fight with each other for the right to breed with a female.

Males wrap their tails around the female and insert their reproductive organs. Mating can last anywhere between a few minutes to a few hours. And boas may mate several times over a few weeks.

Females can carry sperm inside their bodies for up to a year. The gestation period lasts between 100 and 120 days. Female boas have to be in excellent physical shape to mate and have babies. An unhealthy or injured female may not mate during breeding season if she can’t meet the physical demands of being a mother.

Litter sizes can vary greatly from one female to the next, but boas have been known to have as many as 65 babies at one time. The average is about 25, but some will only have 10.

Boas are independent creatures from the moment they’re born, and they grow in the blink of an eye. They’re 15-20 inches at birth, but grow to 6-10 feet by the time they reach sexual maturity at 3-4 years old.

And boas continue to grow (slowly) for the rest of their lives.

Boas shed about once every few months until adulthood, after which they only shed every two to four months.

Just as their name suggests, boa constrictors use constriction to kill their prey. They wrap their bodies around the prey, and squeeze it to death.

Until recently, scientists believed that constriction crushed or suffocated the victim to death. But new research shows that the squeezing action actually cuts off blood flow to vital organs. When this happens, the victim becomes unconscious and quickly dies because blood can’t flow to the heart and brain.

Once its prey is dead, the constrictor swallows its dinner whole.

When most people think of boa constrictors, they think of the red-tailed boa. These snakes have a tan background with dark saddle markings. They’re popular as pets, and can grow to be 12 feet long. 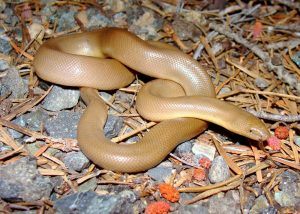 But there are also snakes with the word “boa” in their names. Many of these are not actually part of the Boa genus, but are still popular pets.

Some of the most common boas include:

The rubber boa is found in cooler parts of North America, like British Columbia and the Pacific Northwest, although you’ll find some in Southern California.

When they feel threatened, rubber boas curl up into what looks like a rubber ball.

The rosy boa is closely related to the rubber boa, and is a relatively small snake (about 3 feet). They aren’t true boa constrictors, and are a part of the Charinidae family.

Rosy boas live in the deserts, rocky areas and shrublands of the U.S. where they love to hide in burrows.

The Brazilian rainbow boa is native to Central and South America, and loves to spend most of its time on land. This boa has a beautiful iridescent sheen, which gives it its “rainbow” name. 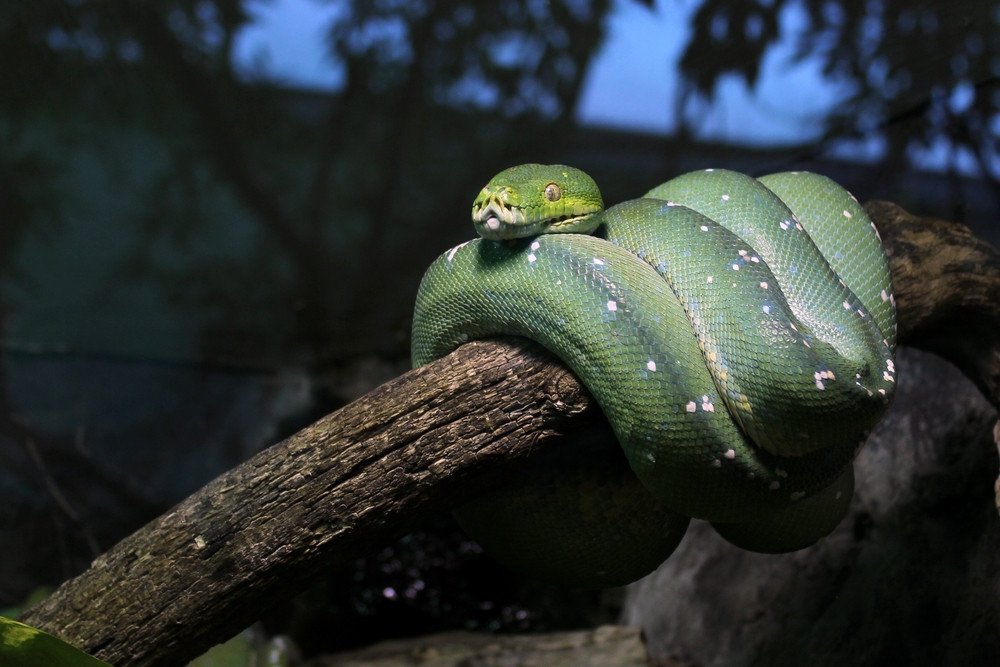 The emerald tree boa gets its name from its brilliant green body, which can range from bright grass green to dark olive green. While this snake is a part of the Boidae family, it is not a true boa constrictor.

Emerald boas live in South America, mainly Brazil, Venezuela, Peru and Bolivia. They grow to be about 6 feet long.

Other fun facts about the boa constrictor

The indigenous people of South America use boa constrictors to kill pests, like mice and rats.

Boas have long lifespans – even in the wild. A wild boa can live up to 30 years. In captivity, boas can live to be 40 years old, although the average is 25-35 years.

Boas, like other snakes, rely on their vomeronasal senses. Their tongues come in contact with odor molecules, which allows them to pick up on chemical cues in their environment.

These snakes have excellent vision, but they can also pick up on sound and ground vibrations.

Boas make popular pets, and rarely attack humans (aside from self defense).