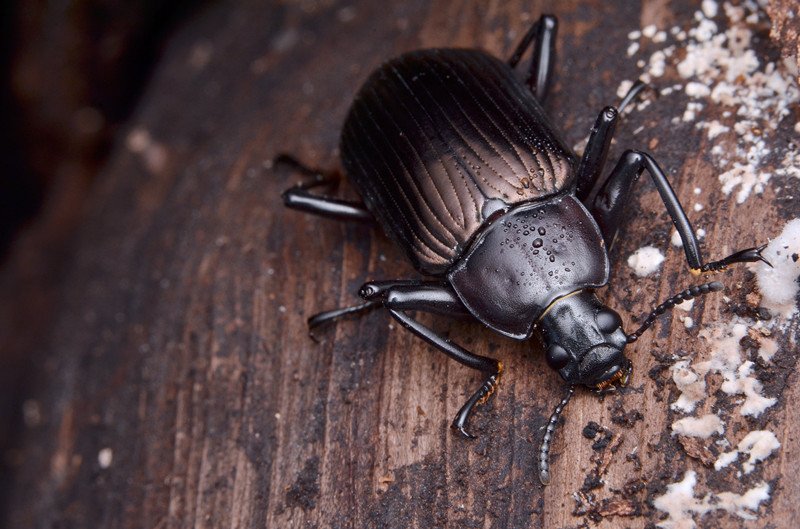 The darkling beetle is the name given to the largest family of beetles. They vary in size and lengths. There are more than 100 species of beetle and one of them in the darkling beetle. They increase up to 1.5 inches in length. The color of their body is black or sometimes brown. They do not have any other color on the body. These beetles cannot fly because their wings are fused back together. The shape of their body varies as some are round shaped while others are oval shaped. Their antennas are emerging from their eye. The larvae are similar to a worm, and it moves with the help of six legs. The larvae depend on the decaying leaves and sticks found on the ground. They have the ability to make tunnels through insulation and results in reducing insulation effectiveness. The male darkling beetle can be identified from its smaller mandibles and the antennae which look unique than other female ones. The female stag beetle can be identified by the full black color wings it has on its body. These species vary in size from 18 mm to 22mm.

What Do they Eat

Darkling beetles mainly depend on decaying wood and plants. They also live by eating plants and other little insects. The adult darkling eats leaves and the decayed plants under the soil. They do not drink water often because they extract moisture from every food they consume. They belong to the family of Tenebrionidae. The main diet of larvae can be cereal and flour. Nonetheless, the main diet is leaves and stems. They are also predator to other small animals such as fungus and weeds.

Where Do they Live

Many species of darkling are found in desserts and soil. About 100 of species are found in the United States, and they are also commonly seen in Jornada Basin. Most of these beetles are available in areas where the temperature is moderate with little rainfall throughout the season. Their species are also found in Norfolk, Yorkshire, and Lincolnshire. They know how to survive in cold temperatures. During the day time, they usually bury themselves in holes because of the extremely hot temperature.  During the night time, they come out in search of food and water. Their wings are used to retain the moisture; this is the reason they are not able to fly.

What Eats them and How Do they Avoid Being Eaten

Mites are the biggest predators of darkling beetles. When they see the eggs of beetles, they suck them and the larvae as well. They have their shell which they use to escape from the predator. Their biggest predators are reptiles, fish, and other birds. The predators usually attack the beetles when they are going through the mating process.

Five Interesting Facts About Darkling Beetles You May Not Know 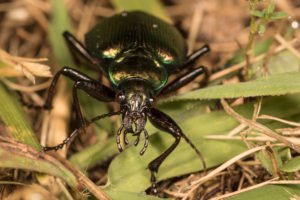 They mainly cause problems in wooden areas and poultry areas. They carry diseases which can be very harmful. If you have any decaying wood near your property, there are chances that they will lay their eggs and welcome more darkling beetles as well. In summers they multiply more quickly. The female can lay up to 2000 eggs in one year. They damage the wooden areas around your property. Many humans do not find them in a friendly way and don’t prefer keeping them as pets.

There are several ways to keep control on the darkling beetle. Following are some of the most common methods.

The first step you can take is to remove all the food resources. They are mostly seen hiding in decaying woods and soil. You need to check the places where the decaying woods and infected leaves are present. It will help you to eliminate darkling bugs from your property or nearby areas. These creatures tend to avoid bright lights, and they are mostly seen in dark places. So you can easily find them in dark and shallow spaces around the property. It also helps them to hide from their predators. These pests also lay their eggs in decaying wood. 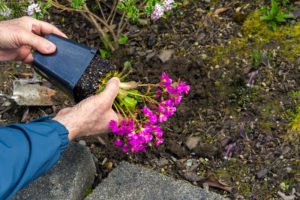 The main diet of darkling beetles is the infected leaves and stem. They are mostly seen living near the decomposing organic matters and plants. If you do not dispose of the infected leaves, it will give darkling battles living space. If you remove these, there are fewer chances for the darkling beetle to come and survive. The best thing you can do is clear all the trash and the decaying matters where you think battles are likely to present. They easily get attracted towards decaying and decomposing matter.

You must weekly monitor the garden to see what is happening. You need to look for beetles in the litter around the garden. It is possible that they might dig up to 2 to 3 inches in the soil to bury themselves. You must remove the weed as it can become a place for the darkling beetles to survive.

To get rid of these darkling beetles you can use organic repellents to stop their entrance. Some of these repellents may be expensive, but their results are very effective. If you think the trees in your garden or your property contains this beetles, then you must try one of the following repellents.

Termidor SC Termiticide is used to treat the pests in the affected areas. They eliminate the insects such as the darkling beetles by injection. They are the most effective non-repellent products which show 100% result. The product has a lower solubility in water and low odor, so it does not damage the underground soil or water. It is very easy to use and setup. The product is suitable for low-pressure power and ensures the pests do not return. The product is readily available online and in markets. You can also apply it to all the exterior walls and doors to eradicate these beetles. Unlike other insecticides, this cannot be felt by the insects. If you are looking for the best pest control pesticide, then this one is one of the best for you.

The target of Zenprox EC Insecticide is to kill all the insects such as the darkling beetles. They are specially designed for indoor use. The Zenprox will kill all the insects inside your property easily and quickly. It can be used with insect growth regulator as it prevents reinfestations. The product will help to save and protect your trees from the beetles. Each product is different from the other regarding features and working. This product is recommended for people who are in search of an effective pest controller. It will not let you down and help you in getting rid of beetles.

It is the most efficient pest controller available on the market. It provides consistent results and fast action. Because the darkling beetle is commonly found in boiler and egg layer, they can easily be caught and killed. Although the prevention of these insects can be very difficult, it is not impossible. Tempo Ultra WP is considered as the most natural and effective pest control for your indoor as well as outdoor use. The product is specifically designed to kill all the beetles that are living in the decaying woods in your yards and gardens.

The darkling beetle has a vast variety spread around the world. They are small insects mostly found in the gardens and woods. They do not harm the humans, but they can be destructive in some areas. Their prevention in gardens and yards is very essential.