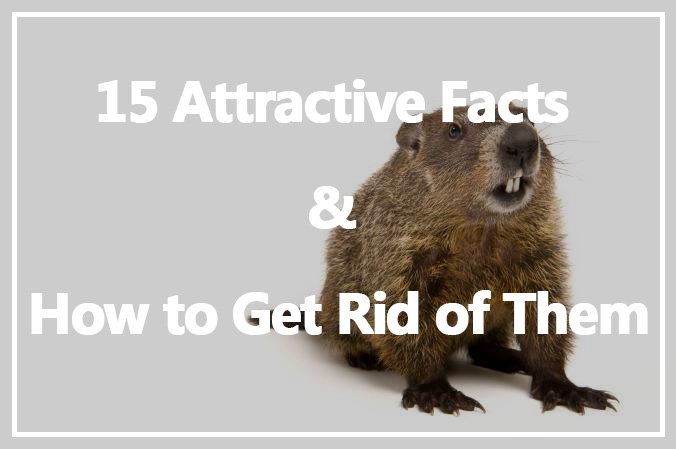 Groundhogs aren’t the most popular animals out there and most of us probably don’t even think about them until the 2nd of February. This is known as the Groundhog Day and it’s used to predict how long the winter is going to last. Of course, these are rather superstitious beliefs but yet again, it has turned into an interesting tradition that quite a lot of people tend to honor in the United States. There are even some famous southern groundhogs but more on that later.

In any case, we’d like to provide you with 15 different attractive facts about groundhogs. They are also capable of causing quite a lot of damage to your yard so we will also show you how to effectively get rid of them. Now, let’s stop wasting time and get right into the interesting part. With this in mind, after the interesting facts we will also show you how to repel groundhogs effectively.

1. They are Also Known as Whistle-pigs 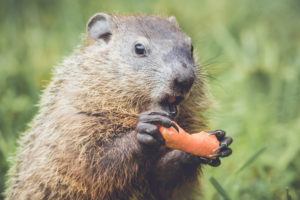 That’s one of their other commonly used name. This is mainly due to the particularly annoying high-pitched warning sign that groundhogs tend to make when they are put in jeopardy. Also, they go by a few other popular nicknames such as woodchucks and ground beavers. The name woodchuck, however, has nothing in particular to do with wood. It comes from the word “wuchak” which is Native American and it stands for “digger”.  After all, young groundhogs as well as older ones are known for creating giant burrows.

2. They are Basically Large-scale Squirrels

Of course, that’s figuratively speaking. They are, however, incredibly tightly related to the squirrel. They are rodents and they have an incredible amount of similarities. Of course, you’d have to consider the fact that they live underground while their tree-cousins’ favorite habitat is high up the forest.

3. They Live in Giant Burrows

That’s probably to be expected. Some of them can get up to 66 feet in length. However, the interesting part is that young groundhogs live in separate rooms as their giant burrows have different levels. They have a room for hibernating (yes, they sleep through the winter) and they also have other rooms where they inhabit during summer season when they are far more active.

4. They Also Have Separate Bathrooms

If the similarities with us, people, are getting too scary, you can look away because they don’t end up here. Apart from having giant burrows and their own rooms, they also have their own separate bathrooms where they relieve themselves. That’s absolutely unknown for any other underground varmint.

6. Most of Them are Also Climbers

Did we mention that groundhogs are essentially squirrels? Well, here you go – most of them are very good climbers. This is due to the fact that there are quite a lot of threats which could catch them off guard while out of their burrow and out in the open. They usually climb trees in order to escape life threatening issues such as dogs, coyotes and wolves.

7. They Have a Very Good Taste of Food

That’s right – we told you that the similarities with people are becoming more and more alarming. Apart from having a thing for luxurious homes, they also have a selective taste in food. Even though they are known for weighing less than 14 pounds, they are capable of consuming more than 1 pound of vegetation every single day. What is more, they are selective when it comes to. They are not just going to consume the first thing they see – they will go for the best cabbages as well as for the best food that you have in the yard.

8. That’s Why Farmers Hate Them

Logically, number 7 leads to number 8. Nobody likes their best fruits and veggies picked up by some underground scoundrel, right? Farmers take different precautions as well as repellents in order to get rid or to prevent groundhogs from getting comfortable in their gardens. More on that, however, later in the article.

This is something interesting. The groundhog is a lone wolf. This is true even for the mothers. That’s right – the mother is going to give birth to her young, nurse it and then they will go on their own separate ways. That’s the way it works. They prefer to be alone and there is nothing social about these animals.

Have you ever heard of an Eskimo kiss? This is how young groundhogs greet each other. According to Scientific American, this is the way they actually say hi to each other – by touching their noses to the mouths. It’s pretty interesting when you think about it.

11. They Hibernate a Lot

That’s another thing that you might be interested in. They do hibernate and do it properly. Groundhogs are known to fall for the winter sleep late at fall and they will wake up early in the spring, going through the entire winter period. Remember how we told you that they like their homes to be luxurious? Well, if you had to sleep for 5 months, wouldn’t you do so as well?

12. They Have Very Short Mating Seasons

That’s something unfortunate. Groundhogs are not known to be the most glorious lovers. Their mating season lasts for about 10 days and that’s it. They are able to stop their hibernation just in time for reproduction. Their mating season takes place early in March and it’s not going to last for more than 2 weeks at most.

13. There is a Tradition Stemming from Them

There is a famous tradition celebrated on the 2nd of February every single year. It originated in Europe and it’s said that groundhogs are used to predict the length of the winter. So, basically, when there are longer winters, people used to blame those poor little things.

14. There are Famous Southern Groundhogs

That’s right – Punxsutawney Phil – that’s the name of the most unfortunate groundhog. Unlike his relatives, he doesn’t get to hibernate properly as on the 2nd of February he is subjected to a particularly stressful parade as well as a news conference. As if he’s giving an interview.

Back in 2014, the Mayor of New York City – Bill de Blasio dropped off Chuck – he was a very famous groundhog who was taken from the Staten Island Zoo. As unfortunate as it may sound, Chuck actually died later on from his injuries. This is a real tragedy in the world of groundhogs.

As you can see, there is an entire culture around those furry little rodents. However, it’s also important to know that, as a lot of their relatives and cousins, they are also a menace to be handled. There are quite a few things that you might want to take into account if you have ground hogs in your backyard. The most important thing that you need is to make sure that you make your yard a lot less attractive to them. With this in mind, we are here to provide you with a few ideas to get rid of those rodents.

Groundhog Damage and How to Handle Them

Now, there are a lot of things that a groundhog can harm you with. Right off the bat, they are particularly selective about their food. They won’t just go for any crops or vegetables – they are going to select the ones which are the freshest and the best in your garden. You can’t have that. Furthermore, they are also putting a lot in jeopardy with their burrows. This is weakening the ground underneath which is capable of causing structural damage to your property – you definitely can’t allow that. So, how to get rid of groundhogs? Here are a few popular and professional suggestions for you to consider.

As we mentioned above, one of the best ways to deal with this threat is to ensure that you make your yard a lot less attractive to groundhogs. Now, being essentially giant ground squirrels, groundhogs like to hide underground. They also like to enter your yard in order to find a nice and safe place to create their home. That’s why you might take a few steps in order to potentially reduce the damage carried out by the pest.

This is also something that you need to take into proper account when it comes to it. It is important to become familiar with the habits of the young groundhog so that you can know how to react. It’s as simple as that.

Now, the common activities that a groundhog is going to go through include:

As you can see, these are capable of causing significant issues to your backyard. The important thing that you want to take into account here is that you should administer the proper methods for control.

You can choose between killing the animal or repelling it and strictly speaking the second option is always preferred, recommended and easier. The reason for this is because you’d have to deal with the dead animal afterwards which, believe me, is an issue. This is why you want to chase him away. Best case scenario for you is to prevent the infestation in the first place. There are quite a lot of different methods for you to do so as well and proper fencing is usually the best idea.

In any case, you need to understand that groundhogs are not that gullible and cute. Even though they might appear so on the outside, they are going to cause significant structural damage to a lot of outside buildings and a lot of devastating damage to your lawn and yard.  That’s why you need to take the necessary precautions in order to get rid of them as soon as it’s possible. If you don’t know how to and can’t find an appropriate working solution, you should consider calling the professionals. It’s something easy that you can easily take advantage of an it’s not going to require any effort on your behalf.