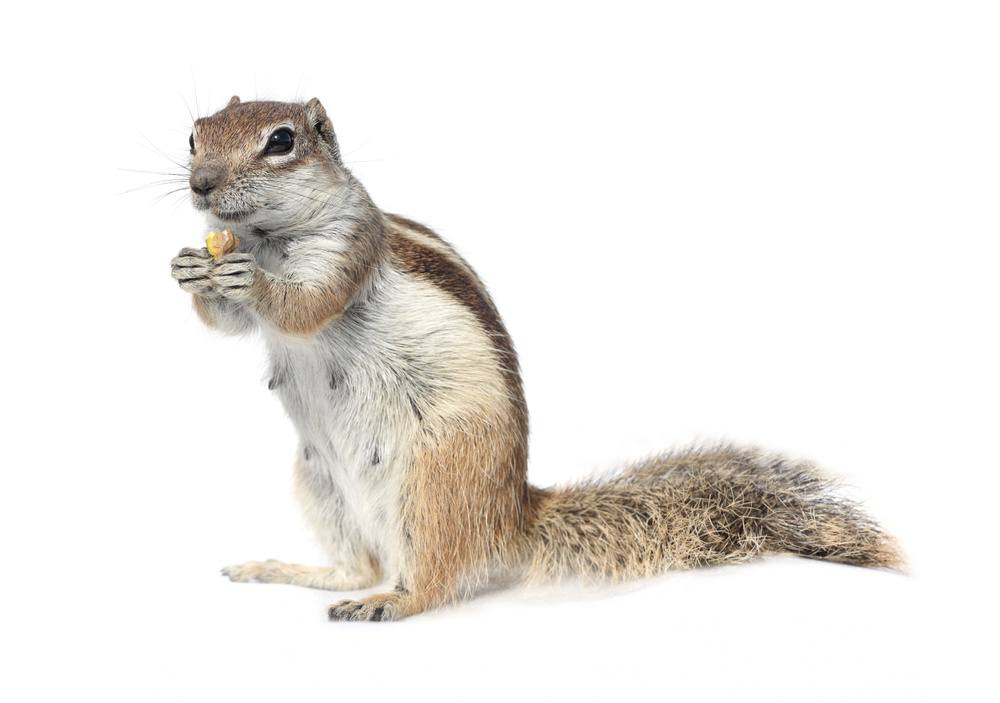 Ground squirrels are the rodents about 8-12 inches long, including 2-6 inches long tail. They come in different colors and skin patterns from gray, light brown to reddish-brown and black depending upon the area and species. The belly color is mostly light from white to gray. The most common ground squirrels found are gray in color and have very soft and luxurious puff of fur on the entire body. The sound they make is somehow similar to that of ducks. You can easily recognize them with their squeaking.

Ground squirrels are also called picket pin because of their quality of standing erect. When they sense danger or startle by anything, they produce a special squeak that can warn the other members of the family or colony.

The habitat of the ground squirrels vary from species to species, but most of them prefer to live in grasslands area covered with trees and bushes. However, they avoid residing in the dense brush and forests.  They adapt the areas like roadsides, levees and ditch banks. Sometimes they also live in the agriculture fields where they easily feed themselves and the newborns. Nonetheless, with time they extend their burrow system in the fields.

Ground Squirrels eat a different variety of the food. Mostly they consume herbs, bushes, forbs, seeds, and nuts, etc. Some squirrels are also very fond of fruits. They also eat animal matter like insects, bird eggs, and some other animal tissues. Although the ground squirrels don’t exactly hibernate, their activities are slow down in extreme winters that they even don’t leave their homes. Therefore, to survive during those days, they collect the nutritious foods like seeds and store them.

The ground squirrels are a social animal, and they live in an extensive burrow system that has the depth of more than 6 feet and multi entrances. These creatures are famous for remodeling the burrows of other animals and marking them as their own. Once they make a burrow, they keep expanding it continuously. Also, they make nests in the burrows and only return at night and at high temperature or when they feel threatened by other animals and humans.

The male squirrels become more active than females in the early spring. They breed mostly in spring. The gestation period is from 4-5 weeks, and female can give birth to 2-10 baby squirrels. They reproduce only once a month and can live up to 5 years.

Among ground squirrels, different subtypes are distinguished by different features.

The thirteen-lined ground squirrel is the type of ground squirrel found in the grasslands of North America. It is brownish in color and has 13 brown and white longitudinal lines. These lines create a distinctive pattern of rows of white dots within the dark brown lines. They are very active on warm days. The diet they take includes seeds, insects, caterpillars, grasshoppers, mice and shrews as well. They also attack cicadas, and if they can catch them, they consume. They are renowned for their speed of about 8mph and can even reverse the direction while running.

The California ground squirrels are found in the open areas of south central Oregon, California and western Washington. These squirrels have brown, grayish fur on their back with multiple cream-colored spots and fleck. Their color is dark gray on the upper part of the body including the head and middle of the back. While the shoulders, sides of the head and lower part of the body is light gray. They are relatively long as compared to other squirrels with the length of about 18 inches. The other important thing about these ground squirrels is they are diurnal which means they are mostly active in the daytime. Although California ground squirrels live in colonies, they are not social and even don’t interact with other squirrels living with them.

Franklin ground squirrels are the inhabitant of North America. It has different physical features from other squirrels. The species has longer claws and slightly creamy yellowish fur on the rump. In addition, these squirrels have short ears and less furry tail. Franklin ground squirrels are also diurnal, they spend the night in their burrows and are active during the day. It is grassland mammal living in tall dense herbaceous areas. For, most of the land is utilized for agriculture purpose, and these squirrels have no place to live. These species are now considered the endangered species of squirrels.

The Arctic ground squirrel is found in Alaska, some areas of Canada and northern Columbia. These squirrels have multicolored fur. The fur on their faces and side is reddish, while on their backs the fur is white speckled gray to brown in color. The legs and belly are of light brown color. The fur around their eyes is white in color, and they have a short bushy tail.

The Arctic ground squirrels are a herbivore, so their diet includes seeds, nuts, leaves, bushes and flowers. They are usually active in the afternoon or at night, but they prefer to stay in their burrows during the rainy season.

Belding’s ground squirrel is found in the mountains of the western US. The species is scattered in the meadows between Lake Tahoe and Kings Canyon in California. Belding squirrel is also known as sage-rat and pot gut. It has a relatively short tail, ears, and limbs as compared to other species. The fur underside of the body is gray and cinnamon in color while the back is reddish brown. Belding’s squirrels are mostly, herbivores. However, some of them also eat insects and other small bugs.

Richardson ground squirrel is the North American squirrel found in Northern states of the US and Western Canada. These are medium sized squirrels often yellow to grayish in color. Like other species, they also live in colonies and are omnivores. They can live up to 5 years if kept under suitable habitat conditions.

America is considered the home of many squirrel species; ground squirrels are one of them. These little creatures look cute. However, they are also the threat to the gardeners. These squirrels destroy the gardens and farmlands and cause a great loss. The squirrels collect different fruits, berries, nuts, pinecones, and also steal eggs and bulbs.

Have you ever wondered where are your spring bulbs going? Surely you would have, that is not some ghost that are stealing your bulbs, but the chipmunks and squirrels are the reason. Squirrels are very fond of eating the bulbs. They don’t just eat, but 0also tend to store the stolen food.

Squirrels not only take your spring bulbs but also destroy your garden. The flowers and beautiful plants are destroyed by them just for fun even if they don’t eat them. The holes and burrows they dig in your garden make your garden look awful. The fruits you have grown in your garden, berries and some other nuts and herbs are the favorite food of squirrels. They took them to their burrows leaving the rotten and destroyed field.

Sometimes, they attack not only your garden but also the bird feeders. If you observe your bird food is disappearing quickly, then it is not because the birds are eating that all instead they are squirrels who steal the bird food from bird feeders.

How to get rid of ground squirrels

Although squirrels look very innocent and cute, the damage they cause is very frustrating. If you want to save your land and gardens from squirrels, then it is critical to get rid of them. Here are the several methods that can be used to get rid of these naughty creatures.

One of the very common methods in practice for ages is catching the squirrels using squirrel traps. There are multiple traps available in the market each being used for different purpose. It totally depends on your choice which traps you want to buy. Some traps are just used to catch the squirrels while the others may kill them.

Fumigation is the method of pest control in which the affected area is filled with the gaseous and poisonous chemicals to get rid of the pests. Since the squirrels are also sort of pests so this method will be useful to get rid of them from your land. But remember fumigation can also be harmful to humans since in this process toxic chemicals are used. Therefore, make sure you hire professionals to fumigate the affected area as it will be safe for you and all the pests other than squirrels will also be removed.

The other way to remove the ground squirrels from your land is by killing them through toxic baits. The squirrels are fond of nuts and fruits. You can use these foods to your advantage as these can be used as baits. All you have to do is poison the bait with some toxic substance. But remember one thing ground squirrels have a great smelling sense, so make sure you don’t use any toxic material that has odor otherwise it will alert the squirrels, and they won’t be trapped in your plan.

Changing the habitat conditions for the squirrels will prevent them from entering your land. You can adapt following ways to modify the habitat for the ground squirrels:

Other fun facts about ground squirrels

There are some fun facts about the ground squirrels.