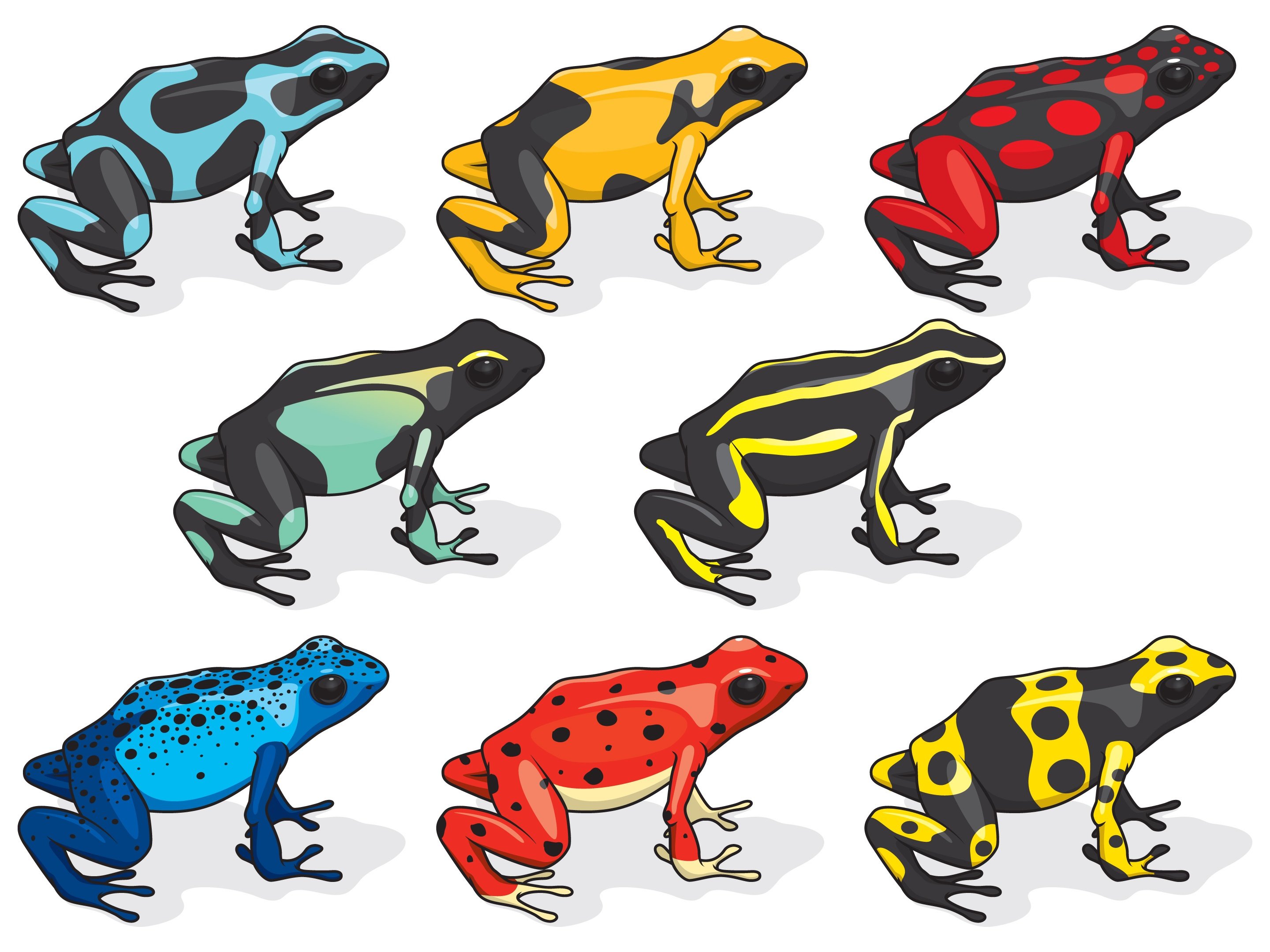 Poison dart frogs are particularly characteristic. They are amongst the most toxic of all the frogs and come in quite a lot of different varieties. This is the main reason for which it’s very important to be well aware of their specifications. Below, you will find comprehensive information about the general species as well as the different color morphs. So, without any further ado, let’s go right ahead and take a quick look.

Most of the species of the poison dart frogs are rather small. In fact, in the majority of the situations they are even smaller than 1.5 cm which is the equivalent of 0.59 inches. A very tiny number of them would grow to about 6 cm or 2.4 inches in length. They would usually weigh about 1 ounce, which is absolutely inconsiderable.

Their appearance is particularly characteristic and this is likely to be the most interesting thing about them. The thing that you should be well aware of is that the more colorful the frog is, the more poisonous it actually is. It’s also interesting to know that the venom actually comes from its skin.

Poison dart frogs are known to be endemic to tropical and humid environment which is characteristic for South and Central America. They are also found in certain tropical rainforests which are scattered through different countries such as Ecuador, Venezuela, Suriname, French Guiana, Peru, Nicaragua and others of the kind.

The natural habitats of the frog contain mainly moist, lowland as well as tropical forests. Other species of the poison dart frog could potentially be found in lowland grassland which is wet or flooded seasonally. In any case, it’s safe to say that they thoroughly prefer the overly humid environment.

Interestingly enough, quite a lot of species from the poison dart frog are actually very dedicated parents. A lot of them carry their own newly hatched tadpoles in their own canopy. The tadpoles would stick to the mucus, as disgusting as it may sound, on the backs of the parents. As soon as the frog reaches the upper parts of the rainforest, it’s going to deposit the tadpoles in epiphytic plants.

That’s quite interesting. Keep in mind that poison frogs would usually fertilize their eggs only through external sources. They can also be seen clutching one another – just like the manner in which the majority of frog species actually copulate.

Now, this is another relatively interesting part that you need to be well aware of. Poison dart frogs actually feed on different things and this would determine their overall toxicity. With this in mind, the most poisonous frogs would feed only on ants, termites and mites. This is something very considerable.

Those which are less poisonous, on the other hand, have rather versatile diet. This is also something which is particularly related to their overall coloration. The more versatile the diet is, the less versatile their color schemes are.

Now, the poison dart frog species includes a range of different color morphs. They have emerged and are in existence for more than 6,000 years, which is definitely considerable. Some of the most popular ones include:

Now, the thing that you need to know here is that quite a lot of different poison dart frogs are capable of secreting lipophilic alkaloid toxins. They are contained in their skin glands and they are designated to serve as a natural means of protection against all other predators. There are quite a lot of structural alkaloids known to be contained in poison frogs – up to 28.

All of the species are neotropical when it comes to their origin. Those which are captured from the wild are most likely to keep their toxicity for quite some time. This is why you should be extra care when it comes to it.

Let’s have a look at 10 interesting facts about those fascinating creatures.

As you can see, there are quite a few different things that you might want to take into account when it comes to the poison dart frog.

There is a common misconception when it comes to poison dart frogs. A lot of people tend to believe that this is just one type of frog while in reality it’s more of a generalized term describing an entire genus. As you can see, there are quite a few different color morphs. The more colorful the frog is, the more poisonous it’s going to be. As we mentioned above, this also means that they are on a rather straightforward diet.

These are certainly interesting creatures to be considered and they pose quite a lot of challenge in the scientific world. Scientists are working to seclude the different alkaloid structures in their skin glands and trying to determine how they are actually produced.