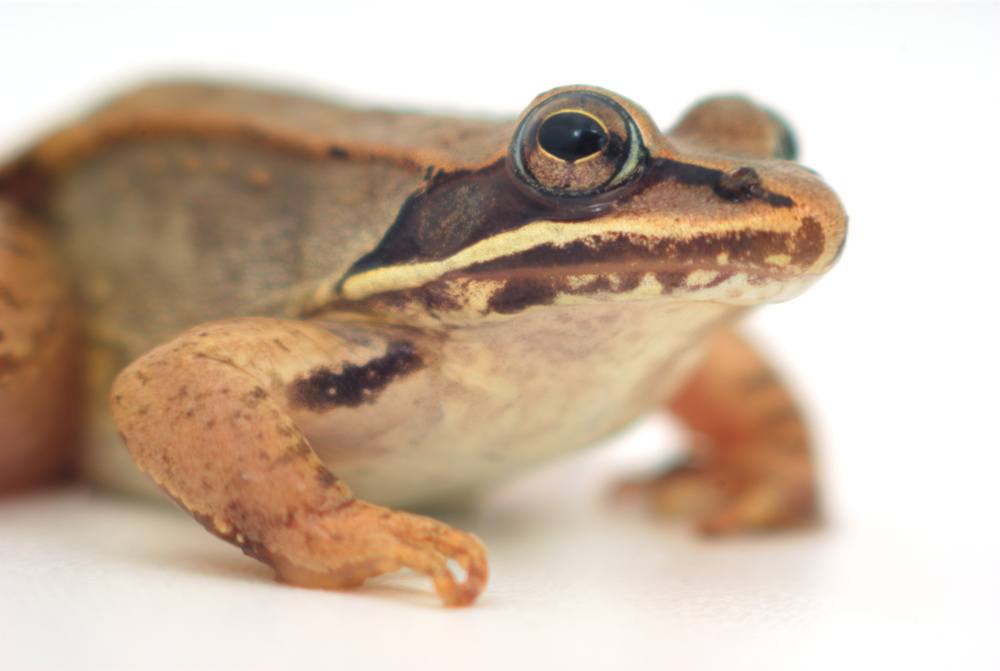 The wood frog is one of the types which is most commonly distributed throughout the entire world. It has a broad population throughout the entire North America and it is very common in the state of North Carolina. It has been garnered by attention by a lot of scientists because of her extraordinary ability to freeze over and reactivate itself once the cold temperatures are passed. This is why it is interesting to take a look at the 10 questions which are going to help you learn quite a lot about this particular type of frog.

This is a characteristic frog which has quite a lot of different sub-species. However, it’s a well-known truth that female species are larger than males. Adult wood frogs are most commonly brown or they have some sort of rust color. They would usually have a dark eye mask. Now, it’s also true that certain individuals are capable of varying their colors, so that’s not something that could be determined conclusively.

They live pretty much everywhere there is moist and slow-running water. The contiguous wood frog has a significant habitat range which spreads from Northern Georgia to the northeastern parts of Canada and they are even found in British Columbia as well as in Alaska. It is without a doubt the most heavily distributed frog in the entire continent of Alaska.

3. What kind of habitat do they need?

Now, when it comes to the habitat of these frogs, it’s safe to say that they have forest-dwelling bodies. They breed normally in freshwater wetlands as well as in vernal pools found in different woodlands. There is also their long-distance migration which needs to be taken into proper consideration. It plays a significant role in their life history. Keep in mind that individual frogs of this kind range widely throughout their own breeding pools and they can also visit neighboring pools as well. Adult wood frogs are most likely going to spend their summers in the moist woodlands as well as in different forest swamps, bogs or ravines.

Wood frogs are going to grow up to 7 centimeters. This is somewhat considerable in comparison to their cousins the poison dart frogs which are likely to get to no more than 2 cm. They grow with strong and bended back feet which have the sole designation of thrusting them forward. As you surely know, their main means of transportation is through jumping.

5. How do they reproduce?

The reproduction of the frog is also rather characteristic. Unlike other frogs which mate in permanent water bodies such as lakes and ponds, for instance, these breed in ephemeral pools. This is mainly due to the fact that it provides them with certain protection for both their adults and the offspring. The reproduction process is also rather straightforward. The male frog is going to approach the female one and clasps her behind with his forearms prior to conveniently hooking his thumbs together in a hold. This hold is called amplexus and it is going to go on until the female deposits the eggs. They would usually do so in submerged substrate which is most commonly a downed branch in the water.

The lifespan of the wood frog would greatly depend on their habitat. Some specimens are known to live up to 3 years provided they do not get severely injured or eaten by predators. This is why it’s said that their natural lifespan ranges from between 1 and 3 years.

Apart from their reproduction cycles, there is nothing out of the ordinary when it comes to the wood frog. They are ground-based reptiles and cold-blooded animals which makes them pretty straightforward in this regard. Their behavior is a bit social as they tend to stand in groups in slow-moving ponds, muds and lakes.

8. How do they communicate with each other?

You’ve surely been to a lake or a swamp at least once in your life. Or, you may have been near a river bench. Well, you’ve certainly heart the clacking of the frogs. This is how they communicate. If the clacking is particularly intense then it’s likely time for mating as this is a very strongly emphasized mating call.

Adult wood frogs tend to prey on arachnids, slugs, snails, worms and insects. On the other hand, their tadpoles are herbivorous and that’s something you should consider. In any case, the diet of the wood frog is pretty versatile and rather interesting.

10. What eats them and how do they avoid being eaten?

Wood frogs should mainly be afraid of snakes. This is also why if you have frog infestation at home, you might want to throw a few rubber snakes every here and there – this is likely to scare them off. However, there are quite a few other natural predators which are going to hunt them down – these include foxes, birds, coyotes, skunks, snapping turtles and raccoons.

Tadpoles, on the other hand, fall prey to different types of animals – these include salamanders, wood turtles, beetles and even other wood frogs. Yep, they are not that tolerant of the offspring of other frogs.

As you can see, there are quite a few different things which could be said about the wood frog. This is an interesting animal which surely deserves a lot of attention. Of course, the aforementioned answers are rather brief but they are designed to provide you with the necessary general knowledge. There is a lot more to be said about them. Wood frogs are also particularly well known for being able to actually recognize their families – this is something that’s not common in the world of reptiles. There are a lot of things to be concerned with when it comes to the wood frog and these begin to describe their complex nature.