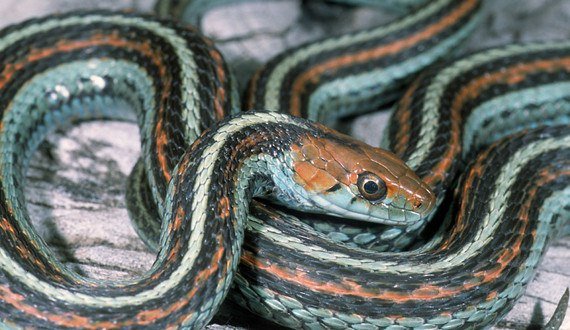 Canada is filled with garter snakes, and these wild garters are also found in the eastern United States. These snakes, common and small, are known for eating small prey and they are often born alongside 20 – 40 brothers and sisters.

Let’s take a look at some garter snake facts and Q&As to learn more about these slithering snakes.

The common garter snake is the one most people are accustomed to seeing in their yards. These snakes have a wide range of colors, and they can be found with three well-defined longitudinal stripes on their body. You’ll find these stripes on the snake’s:

When you see these snakes, they will often have a yellow or greenish stripe pattern, which is the best way to identify them in the wild. But there are 13 subspecies of this snake that will look slightly different with different color stripes.

A harmless snake, this snake will grow to be a maximum of 4 feet in length, but it’s more common for these snakes to be much smaller than this size. When you see this snake out in the wild, it can be any of the following colors:

And, if you don’t bother this snake, it will not bother you. While this snake does have minor venom, it’s so little that it cannot hurt a human. The average length of this snake is 23″ – 30″.

2. Where Do Garter Snakes Live?

You’re not likely to find these snakes in hotter climates because they need to hibernate in the winter months. As a result of these hibernation patterns, the garter snake will be found in two key areas of North America:

They may also be found in other regions of the U.S. where the weather is cold in the Winter. They are found all across Canada and are one of the most common snakes in the region.

3. What Kind of Habitat Do Garter Snakes Need?

We know that these snakes need to live in cold climates, but what type of habitat do they prefer? Any. These snakes are often called “generalists,” and this is due to the snake being able to live virtually anywhere, including:

These snakes can be found anywhere that is cold, but they’re not found in Alaska. While a dead garter snake was found in Alaska in 2005, it was found that this was a new snake and not from an existing population.

4. How Do Garter Snakes Grow?

The diet of this species will dictate how fast it grows. There is no way to determine the exact growth cycle of this snake, but we do know that when they shed their skin, they will continue to grow a little longer each time.

Since the skin will stretch, it’s not a good indicator of growth and size.

Diet is the one true way that these snakes grow, and it’s not uncommon for the snake to grow several inches during the summer when food is in abundance.

Many owners state that these snakes can grow 2″ per month over the course of an 8-month period. Some can grow more than 4 inches in a single month, too, depending on their size when they’re born. Making a snake stay still is very difficult, so it can be hard to measure the speed of growth, although there are software packages available to help measure your snake. These snakes continue to grow their entire lives and will reach maturity at age 3.

5. How Do Garter Snakes Reproduce?

When you see garter snakes, you can be confident that they were part of a batch of babies that consisted of 20 – 40 babies in total. One snake was found to lay 101 babies at a time to set the world record, but this is not the norm.

And some snakes will also lay as few as five eggs, so it varies quite a bit.

The spring months, when the garter snake emerges from its hibernation, are when they’ll be found mating. Since the snakes gather for hibernation, spring seems like the ideal time to mate and expand the population. This eliminates the need for the male snakes to have to go around and search for the female snakes.

While these snakes like the cold, they won’t go into hibernation if they live in areas with a temperate climate.

And since no hibernation occurs, the females will go about and leave her pheromones out for the males to track. What you may not know is that the snake will use its tongue to pick up on the scent of the female and track her down.

This is a form of courting in the snake world.

A fun fact is that when you notice a major increase in the garter snake population, there is a good chance that males are trying to find a female to mate with and are following her trail.

There are also studies showing that male snakes can play tricks on others. See, when snakes mate, they will often go into what is called a mating ball, which is essentially a massive mating of several snakes at one time. But some males have adapted to release the female pheromones, too.

6. How Long Do Garter Snakes Live?

The slender garter snake has a short lifespan, when compared to humans, of just 3 to 4 years. But as with all snakes, they tend to life much longer when they’re kept in captivity. In captivity, these snakes can live for 6 to 10 years on average.

7. How Do Garter Snakes Behave?

Part of the family Colubridae, these snakes will remain most active during the day and will be active in a wider range of temperatures. While they will begin hibernation in October, they often come out of hibernation in March or April, and will be found mating and laying on rocks on most mild days.

These snakes will hibernate in burrows or under rock piles, and they may even travel great distances to hibernate.

Garter snakes will hibernate together to ensure that their internal body temperatures do not dip too low.

8. How Do Garter Snakes Communicate with Each Other?

You won’t hear a snake talk to another snake – I hope – but you will find that they do communicate, especially when breeding. Snakes will use their sense of touch and smell to communicate. The forked tongue of a snake allows it to communicate through a series of chemical signals called pheromones.

The tongue allows the special organ in the snake’s mouth to interpret the chemical signals of the snake.

These same chemical trails will be used by the baby snakes to find other snakes. Good vision and the ability to sense vibrations are also a way for the snake to communicate with the world.

9. What Do Garter Snakes Eat?

Since there isn’t a giant garter like we see with the anaconda, the garter will often feed on smaller prey:

Vision and a good sense of smell allow this species to easily find their food. Larger sized prey may fall victim to these snakes, but these are often very small mammals and lizards. Garter snakes will use a series of tactics to hunt and kill their prey:

Quick reflexes and possibly venom (studies show a low level of venom is present) will help the snake kill their prey. The prey will be swallowed whole by the snake.

Garter snakes will be eaten by larger animals in the region where they live. The issue with pinpointing a main predator is that these snakes can be found in a variety of regions, but we do know that these snakes don’t seem to hide away. Instead, they’re masters of fleeing through water to escape being eaten on land.

When in grassy areas, the stripes will make it much harder for these snakes to be detected, so they’ll often flee and escape while the prey is still trying to locate the snake. A few of the predators that might eat these snakes are:

These snakes will go on the defense to avoid being eaten, and they will release a foul-smelling secretion to try and dissuade the predator from eating them for dinner.

11. What Roles Do Garter Snakes Have in the Ecosystem?

As low-level predators, these snakes are unique in the fact that they’re immune to many reptile poisons. Since these snakes can eat frogs that are poisonous to other snakes, they do help keep the frog and toad populations under control.

Nematodes, a small parasite, relies on the garter snake to live and will live in their tails. While these snakes play a small role in the ecosystem, they do help feed larger animals.

12. Do Garter Snakes Cause Problems?

No, not outside the rare allergic reaction that may occur to a person if bitten. While they may be in abundance throughout North America, the good news is that these snakes pose no threat to humans. The bite of a garter may hurt and may startle a person, but unless your immune system is already compromised, you can expect no further complications to arise.

The nice thing about these snakes is that they have such high population numbers, they have no reason to ever become endangered. In fact, there are so many of these snakes that they even live a good life in urban areas.

Pesticides in some areas pose a risk to these snakes, and that is a concern for all wildlife.

Pollution and killing of these snakes remains a problem, and the Northern populations are at a greater risk due to their habitats being destroyed. Since the garter snake likes to hibernate in packs, they may be killed in large numbers.

While it is important to monitor the population, there is only one subspecies on the endangered list: San Francisco garter snake.

14. What are Some of the Common Species of the Garter Snake?

You know that there are nearly three dozen subspecies of the garter snake, but which ones are most popular? Which species are you most likely to come in contact with in the wild? This depends on your location, but the most common species are:

There is also a beautiful species that has a blue stripe. Some people will call these snakes ribbon snakes due to the bands they have on their bodies.

15. What Will Happen If I’m Bitten by a Garter Snake?

While not poisonous to a human, a snake bite will still irritate a person and may cause an allergic reaction, too. The good news is that no permanent damage will occur, but you should clean out the bite very well.

There’s always a risk of an infection or further complications when bitten by any animal or reptile.

The area where the bite occurred may swell slightly and will likely turn red. Be sure to clean the area and monitor it for any signs of an allergic reaction. In most cases, you won’t need to call a doctor or fear going to the emergency room.

A small garter snake fact that only gardeners know is that many gardeners rejoice when they see these snakes. These snakes will eat many of the insects that have a tendency to destroy crops and do damage to a gardener’s yield.