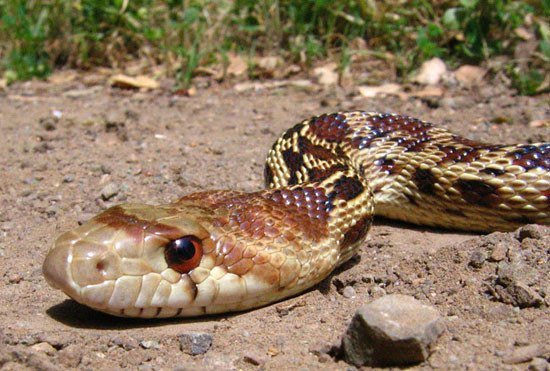 Gopher Snakes may have an intimidating appearance, but these non-venomous creatures are not to be feared. If anything, they’re more afraid of you than you are of them.

Still, these snakes are to be respected, and are sometimes confused with other more dangerous snakes (like rattlesnakes) when out in the wild. Let’s learn more about these fascinating creatures, and find out how to identify them.

Before we get to this snake’s physical appearance, habitat and behavior, it’s important to have a better understanding of the subspecies of this snake. There are several subspecies of the gopher snake, including:

The Sonoran gopher snake’s scientific name is Pituophis catenifer affinis, and is native to the southwestern United States. It’s one of six recognized subspecies of the gopher snake.

This snake’s habitat ranges from west Texas to southeastern California and parts of Mexico, especially in the Sonoran Desert (its namesake). As you may have guessed, these snakes love very dry desert climates.

Adult Sonoran snakes grow to be between four and six feet. The largest Sonoran gopher ever recorded was 7.68 feet long. These snakes are noted for their saddle-shaped blotches, which are reddish-brown in color.

Their diets consist mostly of small rodents, which is why these guys are called gopher snakes. They have tough skin near their noses, which lets them burrow into the holes of gophers and other rodents.

Sonoran gopher snakes can be aggressive, but many people still have them as pets. When domesticated, they can be quite gentle. These snakes hibernate in the winter.

The Pacific gopher snake is found along the western coast of the U.S. Adults are smaller, but can still range from two to seven feet in length. The average length is between 4.5 and 5 feet long. Hatchlings can be quite long – about 20 inches.

The Pacific gopher has a base color that ranges from yellow to dark brown with gray coloring on the sides of its body. Its spots are typically dark brown, and they can have anywhere between 40 and 99 spots on the body. The San Diego gopher snake has three to four rows of small spots on its side. These snakes have keeled scales and a narrow head.

Pacific gopher snakes are diurnal animals, but they can be active at dusk. When the weather is warm, they may be nocturnal. Like other gopher snakes, these creatures prefer dry habitats, like fields, meadows, farmland and even dense forests.

When aggravated or scared, Pacific gophers will hiss loudly. When they feel threatened, they will inflate their bodies to look bigger, flatten their heads to look like a venomous snake, and shake their tails vigorously just like rattlesnakes. People often confuse these snakes for rattlesnakes, which gets many of them killed. But this is a non-venomous species, and the mimicry behavior is simply a defense mechanism. The Pacific gopher snake is carnivorous and feeds on small mammals, such as birds, pocket gophers, birds, lizards, insects, eggs and even bats. In the wild, these guys can live to be between 12 and 15 years old. The oldest known Pacific gopher snake lived to be over 30 in captivity.

Adult bull snakes are between 36 inches and 84 inches in length. Dorsal coloring is typically brown or yellow, and they usually have large black or dark brown dorsal blotches with smaller dark spots on their sides. Like the Pacific gopher snake, the bull snake mimics viper snakes. When it feels threatened or agitated, it will curl itself up and puff up its body. Interestingly, these snakes strike with a closed mouth rather than an open mouth. They’ll also shake their tails to make predators think they’re a rattlesnake.

Most Great Basin gophers are about 4.5 feet long, but the biggest-ever recorded length was 5.75 feet. These snakes have black or dark brown dorsal spots, which are connected by narrow lines running along the sides of the anterior. Its body scales are keeled, and its head is pointed. The Great Basin gopher snake prefers to live in woodlands, grasslands, agricultural land, deserts and riparian areas. They’re excellent swimmers and climbers, unlike their desert-loving cousin the Pacific gopher snake. And just like other subspecies of gopher snakes, these guys will mimic the behavior and appearance of a rattlesnake when they feel threatened. They also eat small mammals and reptiles, including birds, lizards, insects, pocket gophers and eggs.

Gopher snakes are large and powerful serpents. They typically range between 36 and 96 inches in length. And compared to other snakes of their size, they have pretty big eyes. They have large heads, too, with narrow necks. One way to determine whether you’re dealing with a gopher snake or another type of snake is to examine its head. Gopher snakes have a dark stripe that extends from the top of their heads to either side of their eyes. Their colorings vary, depending on the subspecies and the location of the snake. In most cases, their colors blend in with their environments. Some are a light cream color, while others are brown with dark blotches. Female and male gopher snakes are about the same size, and both sexes have keeled scales.

Gopher snakes are one of the most widespread species of snakes in North America. These snakes can be found from the Atlantic to the Pacific, as far north as Canada and as far south as Mexico. Gopher snakes live in a wide range of habitats, too, including forests, deserts and prairies. However, most seem to prefer semi-arid brushy areas near farms. Why? Because that’s where their dinner lives. These snakes prefer to live in underground burrows, where they spend 90% of their time. In the summer, they may emerge to spend some time in the sun. But just like us humans, gopher snakes sometimes sun themselves so much that they get skin cancer.

Gopher snakes are solitary creatures, but they do have home territories. Studies actually show that these snakes will stay loyal to these territories, which are only about a quarter of a mile.

Most gopher snakes are active during the day, but they may hunt at night in the summer. They’re excellent burrowers, and they can climb very well, too. Gopher snakes, just like any other creature, have enemies. Red-tailed hawks, coyotes and foxes will hunt and eat these snakes. Some larger snakes will also prey on these creatures.

Because gopher snakes blend in with the vegetation, they’re usually only caught when they’re out on rocks sunning themselves. They’ll sun themselves on the road, too, which makes them vulnerable to being run over by cars. And instead of slithering off the road to safety, these snakes will coil up and take a defensive stance if they feel threatened.

Gopher snakes are non-venomous, so they use constriction to kill their prey. Constriction overwhelm’s the victim’s circulatory system, which blocks the blood from flowing the brain. Their prey dies in seconds due to what’s called ischemia. Gopher snakes like to feed on small mammals, like gophers, birds and lizards. They’ll eat bird eggs, too.

The gopher snake mates in the summer, July and August to be exact. And this is also the only time that they socialize. Females emit a chemical scent that attracts males and stimulates mating behavior.

Males will wrestle for the right to mate with a female. They’ll mate with as many females as they can throughout the season. Like any other non-venomous snake, gopher snakes lay eggs and are oviparous creatures. Females sometimes lay as many as two batches of eggs per season. Eggs are incubated in nests, which they may share with other gopher snakes.

After 65-75 days of incubation, the babies hatch and are independent from the moment they emerge from their eggs. Females may lay anywhere between two and 24 eggs at a time, and have no involvement in raising their young. Babies are between 12 and 18 inches when they’re born, and can grow to be up to three feet long by the time they reach their third birthday. Female gopher snakes are ready to start mating and laying eggs between three and five years of age. Males are ready a little earlier, at around one to two years old. In the wild, gopher snakes can live to be 15 years old. In captivity, they can live to be 33 years old.

People often confuse the gopher snake for the rattlesnake because they both have very similar appearances and behave in the same way when they’re aggravated. Both snakes have dark splotches on their backs, large heads, and a brown, yellow or cream color. And when they’re backed into a corner, these snakes will hiss loudly, puff up their bodies, flatten their heads and even rattle their tails. If they vibrate their tails on dry vegetation, it sounds just like a rattlesnake’s rattle. This behavior is a type of mimicry, known as Batesian mimicry, that helps ward off predators. While this can help these snakes survive in some situations, it can mean their demise in others. Humans often kill gopher snakes because they think they’re rattlers.

Here are some tips to help you decipher between a rattler and a gopher snake:

Still, if you’re not sure whether it’s a gopher or rattlesnake, it’s best to leave the snake alone. That tip applies to any classic wild sake you meet. It’s always better to be safe than sorry.

Gopher snakes are listed as “least concern” because their population is relatively stable. They are not listed on the endangered species list either.

Other Fun Facts about Gopher Snake

The gopher snake can be found in many parts of North America, and while they’re harmless, it’s best to leave them alone if you catch one out in the wild. If they feel threatened, they can become quite aggressive – and you don’t want to get close enough to have to determine whether it’s a rattlesnake or a harmless gopher snake.