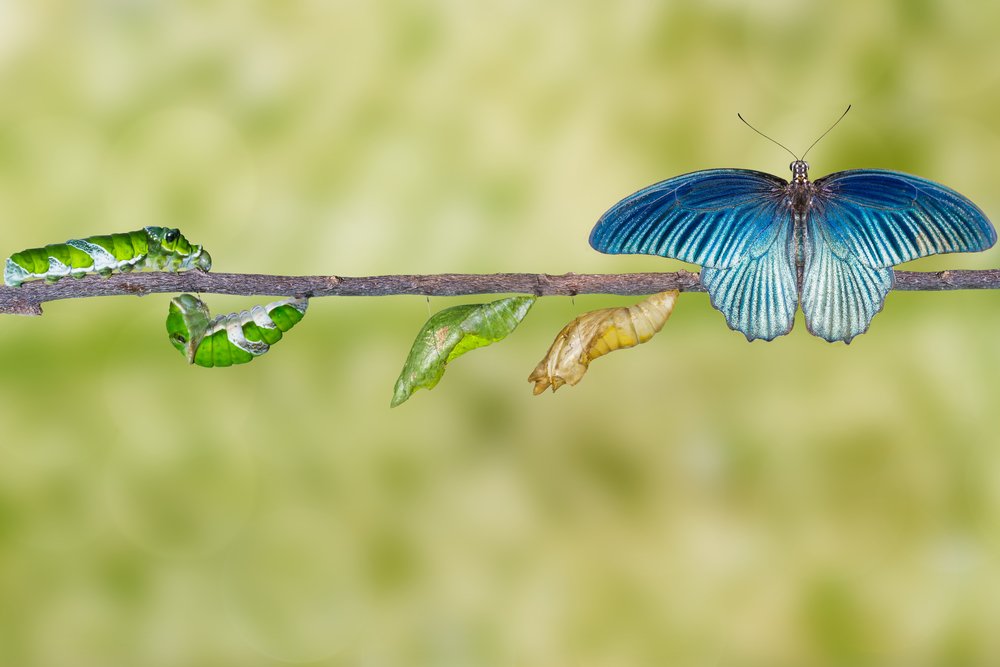 You might be wondering how a caterpillar becomes a butterfly. After all, these two animals look nothing like each other in any way; however, one turns into the other. They are one and the same, which is very interesting, but can also be confusing to say the least. The process is called metamorphosis, and in some ways, it is completely mind boggling.

In our opinion the process of metamorphosis which a caterpillar goes through to turn into a butterfly is one of the most fascinating biological processes on the planet and it definitely deserves some closer analysis. Let’s take a closer look at exactly how a caterpillar goes from being a little worm like creature to colorful and majestic winged insect.

The Caterpillar’s Life: Preparing for Transformation

The diet of a caterpillar varies wildly depending on the species. The vast majority like to drink plant nectar as their main source of food, but some species are known to feed on certain plants, veggies, and fruits. It takes a lot of energy for a caterpillar to turn into a butterfly; on average a caterpillar will eat roughly 2,700 times its own body weight before it is ready for metamorphosis. As you can probably tell, moth larvae, or caterpillars, spend literally all of their time eating.

Another important part of the process for the transformation from caterpillar into butterfly is molting. Yes, just like snakes and spiders, moth larvae, or caterpillars, shed their outer skins, called the cuticle, every time it gets too big. It’s kind of like a hermit crab outgrowing its shell and finding a new one, except with a caterpillar, it grows the new shell around it. Each stage of a caterpillar’s life is known as an instar. A caterpillar is in its first instar as soon as it has hatched, and then in the second instar once it has molted the first time. Some caterpillars go through 3 or 4 instar stages while some can go through 5, 6, 7, or even 8 instar stages. Each time molting happens, the caterpillar is one step closer to being able to form a chrysalis and start turning into a butterfly. Once a caterpillar senses that it is ready to form the chrysalis, it will find a place that it deems safe to be for anywhere from 1 to 3 weeks. It needs to be safe because during this time it will not be able to defend itself at all. Exactly how a caterpillar knows when it is time to start making a chrysalis is still to be determined at this point. It could have to do with instinct, size, or environmental factors around the caterpillar.

On a side note, some caterpillars do actually hibernate. Some caterpillar and butterfly that live for longer, if they are born in the spring or summer, will create a nest out of leaves and silk that they produce, thus waiting until the spring to form the chrysalis and begin the metamorphosis process. However, only caterpillars or butterflies that have a longer life span do this; most others simply go through the process from the beginning of spring to the end of autumn.

The Chrysalis: Time for Metamorphosis Now it is time for metamorphosis, which means that the caterpillar will spin itself a chrysalis and start turning into an adult butterfly. First off, a caterpillar will leave the plant it has been on, the plant it has used for feeding, in search of a safe place to create the chrysalis. This is usually on the underside of a large plant or branch of some sort. What is interesting to note is that the chrysalis is spun out of silk. Part of the reason why a caterpillar needs to eat so much is so that it can produce silk for the chrysalis. In case you are thinking of referring to a butterfly’s chrysalis as a cocoon, this is technically wrong: Butterflies make chrysalises and moths make cocoons.

The caterpillar then hangs itself upside down from the location of choice and spins its silk chrysalis. This process can take several hours because the caterpillar has to make sure that the chrysalis is thick enough for protection and has no little holes where fluids can leak out. This is kind of an odd process, just some fair warning.

Once the chrysalis is completed, the caterpillar begins to release special enzymes which digest it. Yes, that is right, a caterpillar actually digests itself, turning into a soupy and goopy substance inside of the chrysalis. At this point, it no longer resembles a caterpillar. If you were to break a chrysalis open at just the right time, a soupy caterpillar liquid would come out.

You might think that it is all just one goopy mess, but this is also not quite true. During the beginning stages of metamorphosis, the caterpillar has special cells called imaginal disks which survive the digestion process. These imaginal disks are the building blocks, the cells which will multiply and grow into eyes, wings, the body, legs, antennae, all of which constitutes a fully grown butterfly. Once everything but the imaginal discs have been digested and turned into soup, the imaginal disks begin to rapidly grow and multiply. They use the rest of the digested caterpillar, which is a like a very powerful protein shake, in order to grow. A group of 50 cells which form the wings can multiply to over 500,000 cells in just a couple of weeks. What interesting is that some of the parts of the caterpillar’s body are preserved when the fully grown butterfly emerges from the chrysalis.

There are even some studies which indicate that both moths and butterflies can actually remember the things that they learned as a caterpillar. In other words, even though it is a totally new and transformed animal, somehow the consciousness and memory appears to be one and the same. This is not yet proven beyond all doubt, but it does have some pretty strong evidence to back it up. The metamorphosis process lasts a different amount of time for different species. Generally speaking, the smaller the butterfly species, the less time it will take. Some caterpillars can take a little over a week to turn into a butterfly, while others can take closer to a full month.

Emerging as an Adult Butterfly First off, when a butterfly emerges from the chrysalis, it has a very bloated stomach and abdomen because it is full of a waste product called meconium. This needs to be discharged first, which happens simply by defecating it. Next, when a butterfly emerges from the chrysalis, its wings are very shriveled and are not inflated, so to speak. In other words, they have no hemolymph in them. Hemolymph is the blood-like substance which insects have in them. We humans have blood running through our veins while insects like butterflies have hemolymph.

Butterflies need to pump the extra hemolymph which is spread throughout their bodies into their wings. This process takes several hours to complete as it is slow going. The hemolymph will eventually fill out the wings and make them ready for flight. One more thing, a butterfly’s wings are wet when it emerges from the chrysalis. A wet butterfly cannot fly, and therefore, it needs to spread its wings out and stay still for a good few hours until it is dry enough to take flight.

Now the butterfly is an adult and ready to repeat this process all over again. It will go out and lay eggs, it will die, the eggs will hatch into caterpillars, the caterpillar spends several months at an all-day buffet, it spins a chrysalis, transforms, and emerges as a butterfly all over again.

As you can probably tell by now, butterflies, and moths too, are some of the most interesting, beautiful, and complicated creatures on this planet. The process they go through in order to transform from a caterpillar into a butterfly is both breathtaking and spectacular. It’s not something that many people would believe to be possible if there were no evidence and documentation of it.