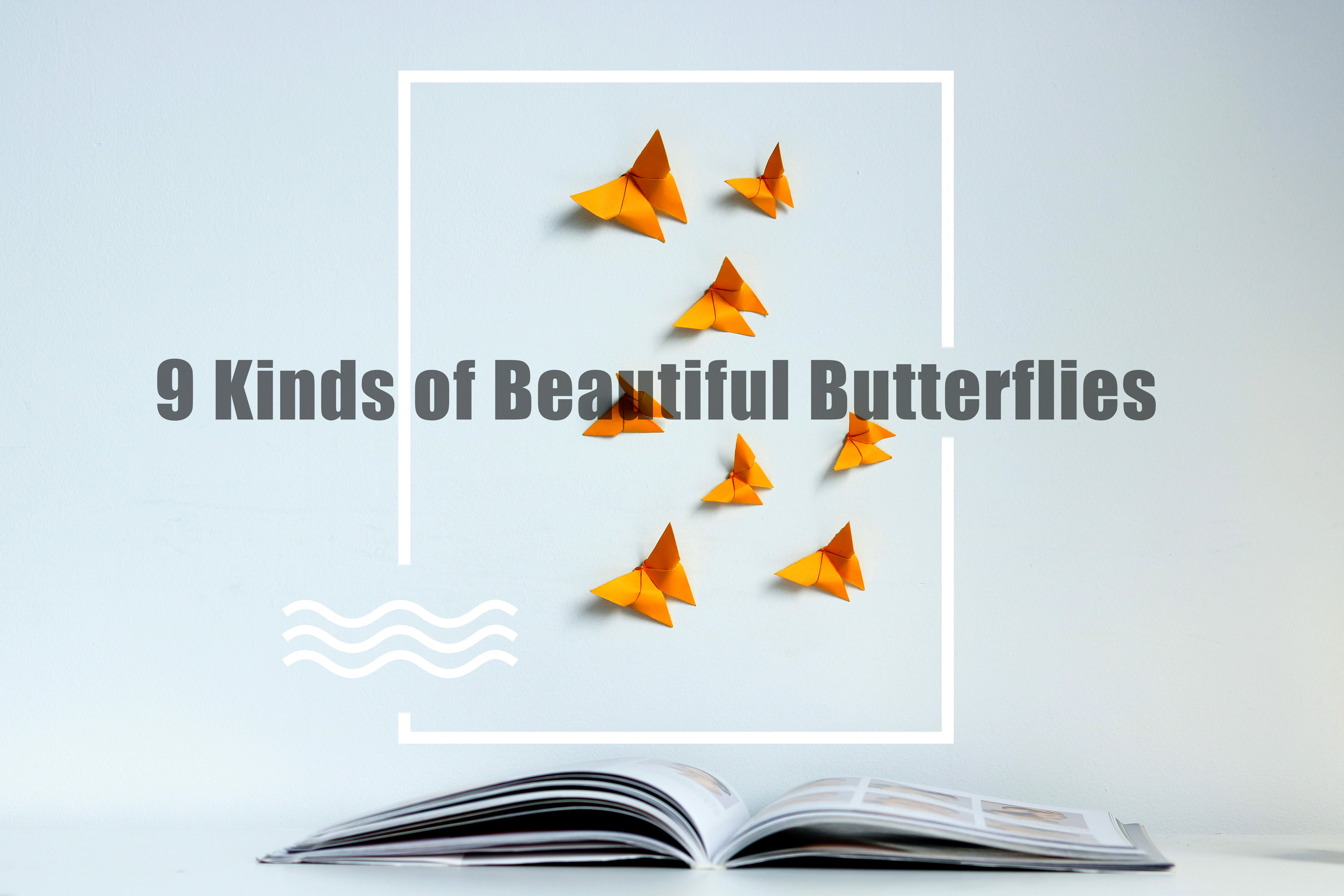 Butterflies are some of the most beautiful creatures out there, but they don’t look all that nice for a good part of their lives. Here we are talking about the caterpillars. Just in case you don’t know, the caterpillar is the larval stage of a butterfly’s life before it goes into a chrysalis and turns into an adult butterfly.

This is indeed a very complicated, and energy-intensive process where special cells break down a caterpillar inside of the chrysalis and rebuild it into an adult butterfly. It is a very interesting process that deserves further discussion.

However, today we are not here to talk about the metamorphosis process as much as we are here to discuss the different types of caterpillars and butterflies. Which caterpillar becomes which butterfly is the main focus of today’s article. Let’s get right to it and identify some of the most popular, common, and well-known caterpillar and butterfly species out there right now. They are some pretty neat looking butterflies, with orange-brass colored wings that feature dark black borders. Their wing span is around 1 inch or just a little longer, which is a fairly average size for a butterfly. Male European Skippers will patrol grassy areas with a slow and meandering flight looking for females that are receptive to mating. The females will then plant their eggs in long string along flower and plant stems.

The European Skipper caterpillar then lives in a home comprising leaves, plant matter, and other debris that is spun together with silk. They will spend most of their lives inside of this home, eating and working up the energy to go into a chrysalis and transform into an adult European Skipper butterfly. They are usually found in any grassy area or in abandoned homes. The adults like to eat things such as nectar from low-growing flowers like orange hawkweed, fleabane, thistles, red clover, white clover, and some other flowers too. The Eastern Tiger Swallowtail butterfly is one of the most common butterflies in North America, especially throughout the central states in America. Interestingly enough, this butterfly can also be found in Turkey. This butterfly flies from the spring to fall and can produce as many as 3 broods in this short time. The adult Eastern Tiger Swallowtail butterfly feeds on the nectar of several plant species that are commonly found in grassy and fielded areas throughout North America.

The Eastern Tiger Swallowtail caterpillar is about 2.2 inches in length and feed on a variety of plant matter to gain enough energy to start the metamorphosis process. They are brown and white when they are younger, but as they age, they will turn green and feature 2 eye spots that are green, blue, and black, which are located on the thorax. The Eastern Tiger Swallowtail chrysalis is usually of a whitish-brown color. Gestation within the chrysalis usually lasts around 2 weeks, but this depends on the environment.

The Eastern Tiger Swallowtail butterfly is a bright yellow color with 4 black stripes known as tiger stripes. Also, these butterflies are some of the biggest around, with a wing span of 5.5 inches. These butterflies like to live on plants including wild black cherry, ash, cottonwood, lilac, magnolia, tulip, and willow plants. The Monarch butterfly is also one of the most common butterflies found throughout North America. They can be found from Canada all the way down south to Mexico. On a side note, all Monarch butterflies migrate down to a small forest in Mexico during the cold winter months in North America where they mate and enjoy the warmth. They do this every single year without fail. What is also interesting is that no Monarch butterfly makes this journey twice. They lay their eggs on their way back from Mexico and die along the way.

The Monarch butterfly is known as being one of the most prolific flower pollinators in North America, making it a vital component to the ecosystem. These butterflies have a wingspan of around 4 inches, making them a fairly big butterfly. When they fly, they look like they are effortlessly sailing or gliding through the sky. They feature an orange, yellow, and black pattern with tiger stripes. The Monarch caterpillar looks very interesting and goes through 5 specific instar stages.

At first, the Monarch caterpillar is pale green and translucent. In this first stage it does not have any tentacles or special coloration. In the second instar stage, it develops a white, yellow, and black pattern of inverse bands. The third stage features the elongation of tentacles and intensification of color. The fourth stage is where the pattern starts to change, and the fifth stage is where the banding pattern becomes very complex and dots start to appear on the legs. After it has eaten and grown enough, it will go into a chrysalis for about 2 weeks and emerge as a fully grown adult Monarch butterfly. The Common Blue butterfly is another really beautiful specimen to take a closer look at. As the name implies, it is quite common and can be found in Europe, North Africa, the Canary Islands, and the British Isles. However, what this name does not tell you is that the Common Blue butterfly is actually not so common anymore. In recent years it has suffered a 96% population decline due to habitat loss, so it won’t be common for much longer.

What is unique about the Common Blue butterfly is that that males and females look extremely different. Males are very vibrant and bright with blue coloration, with a black inner rim and a light blue outer rim at the edge of its wings. The female on the other hand features a lot of brown, white, and orange on the wings. There is still a lot of blue on the females, but not as much. Their wingspans are a little over 1 inch, which makes them one of the smaller butterflies around. The Old World Swallowtail butterfly is absolutely stunning. It features yellow-whitish wings with distinct black vein markings, with the lower half of the wings featuring a blue band and a very distinct red dot in the center.

The Old World Swallowtail butterfly has a wing span of around 3.4 inches, making it a fairly large butterfly. This thing can be found in many places of the world including Asia, Europe, and North America; they are usually never found in the southern hemisphere. The caterpillars are very neat looking too. Just before they go into their chrysalis, they are a bright green color with white legs that feature black dots, with orange and black bands all along its body. The reason why it is called a Mourning Cloak butterfly is due to its color pattern. Simply put, it looks like a mourning cloak that somebody would wear at a funeral, with black wings featuring a white trim and blue dots near the bottom. They may have kind of a sad name, but they look really majestic. The Mourning Cloak butterfly has an average wing span of 3 inches, making it an average-large sized butterfly.

What is interesting to note is that the Mourning Cloak butterfly is always the first butterfly out in the spring as the caterpillars begin transformation early and it usually only takes a few days to complete the metamorphosis process. As you can probably tell by the name of this butterfly, it is most commonly found in America, but it can be found all throughout North America. As long as the climate is temperate, and you are in North America, chances are that you will see this butterfly at one time or another. The American Painted Lady butterfly likes to live in habitats that have tons of flowers as they love to eat sweet nectar. They are usually found in mountainous regions and tend to live at a fairly high elevation compared to other butterflies, which means that they do pretty well when it comes to handling colder temperatures.

The American Painted Lady butterfly is quite solitary and usually spends a lot of its time in a self-built nest consisting of spun silk and leaves. Their favorite foods include flowers in the sunflower family, pussy toes, burdock, and ironweed. They also like aster, goldenrod, vetch, and milkweed. An interesting fact about the American Painted Lady butterfly is that they all have taste receptors on the bottom of their feet so they can actually taste nectar before choosing to consume it. The Black Swallowtail caterpillar is a very neat looking creature and it goes through a really stunning transformation as it prepares for metamorphosis. At first, they closely resemble bird droppings. However, by the time they are ready to go into the chrysalis, they are a very light and bright green in color with a combination of yellow and black bands. They love to eat nectar, and the leaves from plants in the carrot family, from dill, parsley, and fennel. The Dingy Skipper butterfly is admittedly one of the least colorful and beautiful butterflies around. As the name implies, it is a pretty dingy looking butterfly. It features various shades of brown in a decent looking pattern. Its wingspan is under 1 inch, making it the smallest butterfly on this list today. The Dingy Skipper butterfly likes to eat bird’s foot trefoil more than anything else. These butterflies love to get a lot of sun, often resting on rocks and basking in its warmth.

This creature can be found in the British Isles, mostly in Britain and Ireland. They like to reside in fairly open habitats, often where there is food production going on. The population of the Dingy Skipper has seriously declined over the past few years due to severe habitat destruction.

The Dingy Skipper eggs are a whitish green color, with females laying them very sparingly. As the eggs mature, they turn orange, making them very easy to see. The Dingy Skipper caterpillar emerges from the egg yellow, but as it molts over and over again, it turns a bright green color and has a black-purple head. This caterpillar will build a nest and hibernate over the winter, and then when the spring comes, it will create a chrysalis and transform into an adult Dingy Skipper butterfly.

Which caterpillar becomes which butterfly is a multifaceted topic, to say the least. Obviously, we have not covered all of the butterfly species here, but we have covered the most common, popular, and beautiful. While the caterpillars don’t always look so beautiful and may even be poisonous, once they are done their transformation, they turn into some of the most elegant and beautiful creatures on the planet. The wait is always worth the end results with these neat little winged insects.