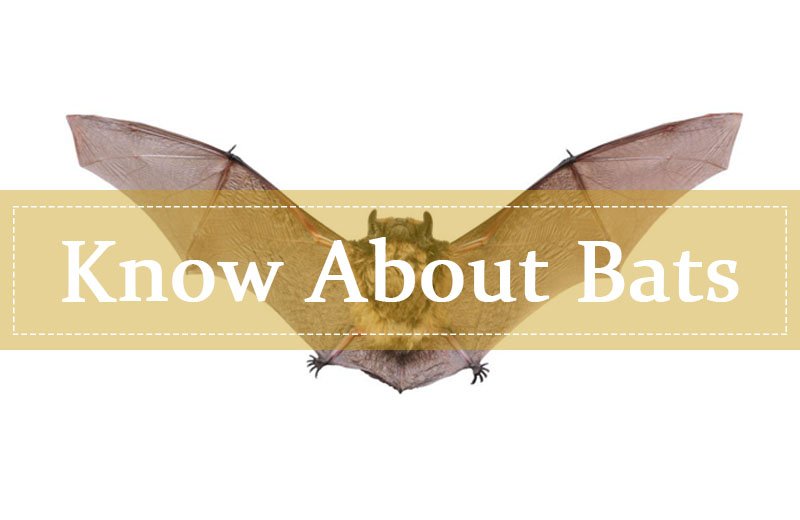 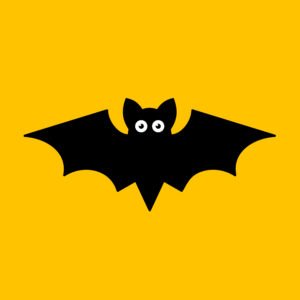 When people hear the word “bats,” they run for cover. That’s not a surprising move considering this flying mammal’s reputation. Associated with vampires and the scary creatures that go bump in the night, bats aren’t looked on too kindly by humans. But just like any other animal, they have their purpose. And contrary to popular belief, attacks on humans are exceptionally rare.

Continue reading to learn more facts about bats in our bats wiki.

What Family is a Bat From?

Look up the words “bats definition” online, and you’ll find a definition for someone who is “crazy” or “batty.” But bats are far from crazy.

There are around 1,240 bat species that are divided into two sub-orders: megabats and echolating microbats.

There are more than 1,200 species of bats in the world. Some of the most well-known species include:

Many of these bats are surprisingly adorable. Search for bat pictures or great bat pictures to see for yourself.

Yes, bats are mammals and give live birth. But they are special mammals because of their natural flying abilities.

Many people are completely unaware that bats are mammals, which is why they often ask: “do bats lay eggs?”

Bats give live birth. They do not lay eggs.

How Do Bats Fly?

Bats are unique in that they are the only mammal in the world that is capable of sustained flight. Other “flying” mammals, such as the colugo, flying squirrel or gliding possum are only capable of gliding for a short time in the air.

Unlike birds, bats do not flap their entire forelimbs. Instead, they flap their digits, which are long and covered by a thin patagium, or membrane.

What Do Bats Eat?

The vast majority of bats, around 70%, are insectivores, meaning they only eat insects. The remaining bats prefer to eat fruit, and are known as frugivores.

There are two unique species: the fish-eating bat and the vampire bat. The former feeds on fish while the latter feeds on the blood of animals.

What does a pipistrelle bat eat? Insects – and most of them are caught mid-air.

Bats and Their Ecological Role

Bats play an important ecological role, and are responsible for dispersing fruit seeds and pollinating flowers. In fact, there are many tropical plants that depend on bats to distribute their seeds.

From an economic standpoint, bats are important because they consume insects, which reduces the need to spray pesticides. Brown bats, known as myotis, can consume up to 1,000 mosquitoes in an hour.

Contrary to popular belief, bats actually have excellent eyesight. Giant bats can actually see three times better than humans. And some bats in certain circumstances prefer to use eyesight over sound when hunting.

Many species have evolved to have certain visual abilities. Seba’s short-tailed bat and Pallas’s long-tongued bat both have special visual receptors that allow them to see well in daylight and can even see colors.

The Egyptian fruit bat has excellent echolocation and vision. Insect-hunting bats will often use vision whenever they can to hunt for food. The brown long-eared bat prefers to hunt when it can use both visual and sound information.

The myth that bats are blind mostly derives from their preference to hunt at night and their echolocation abilities.

Bats are relatively quiet animals, but they do make noise. Using their echolocation abilities, bats send out high-pitched noises through their nose or mouth. The signals bounce off objects nearby, and send echoes back to the bat.

Bats read these echoes with their sensitive ears. Those echoes contain information that tell the bat where the object is, its size and its shape. These flying creatures will also use this ability to find their way back to the bat cave.

What does echolocation sound like? You’ll never know – the sounds are impossible to hear with human ears.

Where Do Bats Live?

Bats can live in a variety of environments, and they’re found in virtually every part of the world. The only places bats aren’t found are in extremely hot or cold climates. These flying mammals can be found on every continent aside from Antarctica.

While bats shy away from really hot climates, they do love warmer weather. Warm spots near the equator, such as rain forests, are prime locations for bats to set up roots.

Bats often live in caves, but they can also be found living in crevices in rock, hallowed out logs and yes, human dwellings.

Do Bats Bite You?

Bats can and do bite humans, but it’s not as common as you might think. With that said, bat bites can be dangerous.

The CDC warns that bats can spread several fatal diseases. Rabies is the primary disease associated with bats.

They can, but it’s not common. There have been accounts of people being bitten in their sleep. Vampire bats are the most likely to exhibit this type of behavior, as they feed on the blood of other mammals.

Surprisingly, there is little data about bats and swimming. Naturalists have observed in the field that bats can in fact swim, but will only do so in stressful situations.

Bats may swim to escape from predators or get food, but you’re not likely to find them swimming for fun.

If an island-dwelling bat has to fly long distances to find food, a forced landing into water to collect food may be necessary.

We have seen images of the flying fox actually swimming using its feet and wings to get back to land, but don’t actually float or paddle.

Do Bats Come Out During the Day?

Not typically. Daytime is to bats as night is to humans. This is the time of day when they rest, groom and sleep.

With that said, bats do sometimes come out during the day. And that doesn’t necessarily mean something is wrong with the bat.

While all bats will fly during the day if necessary, the pipistrelle bat appears to exhibit this behavior more than other species. Scientists aren’t sure why this particular species does this.

Can Bats Live in The Cold Weather?

Do bats hibernate, or can they ride out the winter? Many bat species pack it up for the winter, but not all hibernate.

Those that do typically live in higher latitudes when insects are scarce. Hibernating bats will spend their dormant months clustered on ceilings or in caves, curled up in balls.

Hibernation can last as long as six months, but bats are able to survive this period on just a few grams of fat stored in their bodies.

How can they do this? By dropping their body temperatures and slowing down their metabolism. Bats slow their metabolism to the point where their hearts are beating at 10 beats per minute.

While bats do their fair share of hunting, they are hunted by other animals as well. Bats are the lunch of choice for many animals, including:

Bats can also be killed by birds that fly into their caves and peck them to death. These predatory birds will drag the dead bat outside to devour it.

Certain types of fish will catch bats as they skim over the water in search of insects.

Why Do Bats Sleep Upside Down? 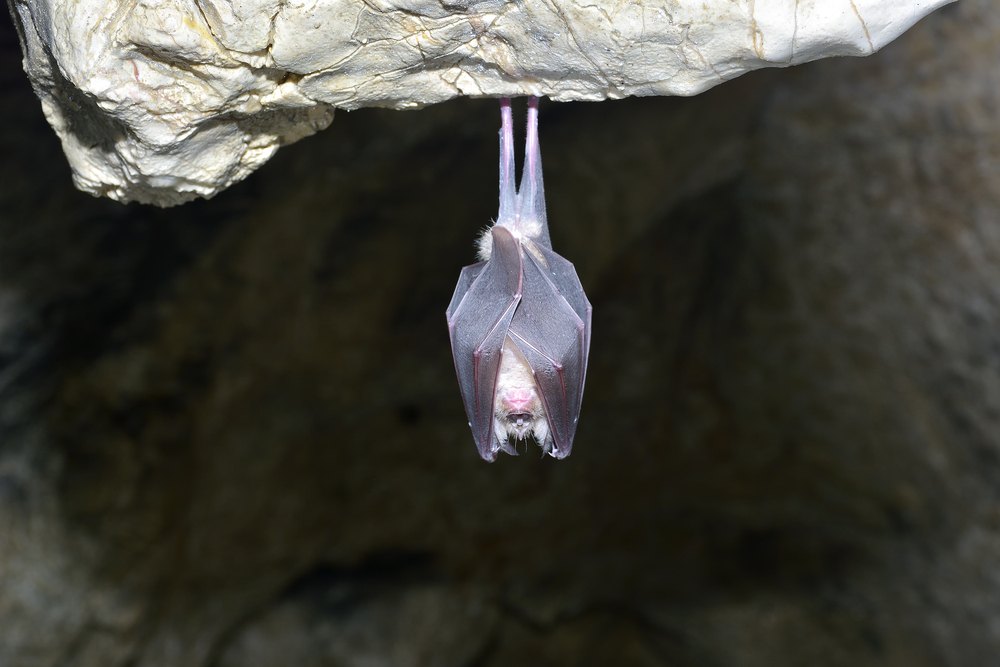 When you see bats sleeping, they’re typically upside down. But why?

Hanging upside down is a great way to avoid predators while they sleep, but it serves another purpose, too: easy flight.

Bats can’t take launch into flight from an upright position because their wings cannot generate sufficient lift. Their hind legs are underdeveloped, too, so they can’t develop enough of a lift for take-off.

Bat poop looks like a small grain of brown rice, and it has a very distinct odor. If left intact, droppings in an attic or in the walls of a home can lead to the growth of fungus or mold.

The biggest issue with bats is disease. They aren’t inherently dangerous to humans aside from the fact that they can carry rabies and other diseases, including: histoplasmosis, Ebola and Nipah.

No, bats are mammals.

Some bats are considered endangered. Because these flying mammals only give birth to one pup a year on average, they are extremely vulnerable to extinction.

Bats live longer than most mammals of their size. The little brown bat, for example, has a lifespan of 30 years in the wild.

Watch any bats video, and you’ll question why someone would ever consider keeping a bat as a pet.