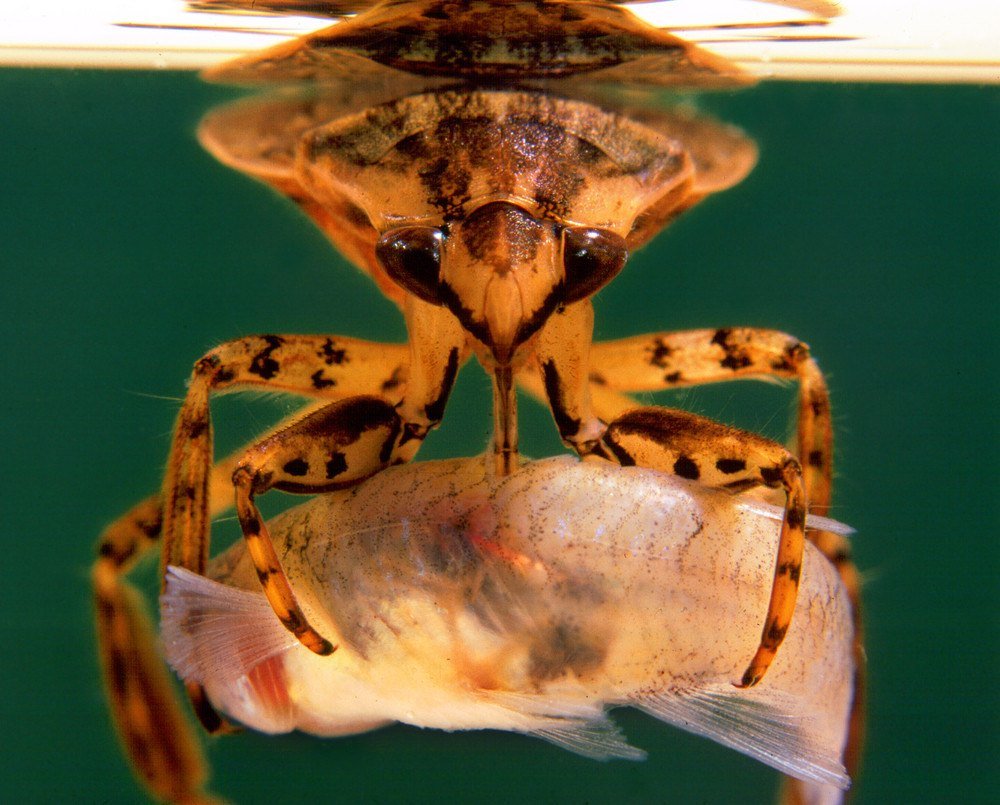 Water bugs are the types of insects which are primarily found in water but may be seen on land. They have some resemblance to cockroaches and beetles. They are the large predatory insects with a sensitive side. The males carry eggs deposited by females and look after them until they hatch. Two types of water bugs are found with standard size and ones which are giant in size.Their length varies between one to two inches long while the giant ones have around two to four inches long.They have oval shaped bodies ranging from dark brown to tan color.Giant water bugs do not have lungs they breathe from their backs where the exchange of gasses takes place. Water bugs have alternative names like Giant bugs, Toe biters, alligator ticks or electric light bug.They belong to the family of Belostomatidae.They are found worldwide mostly in North and South America, East Asia and Australia. Typical habitats include ponds and streams. Water bugs are carnivores in nature. They use their forelimbs for attacking their prey. Water bugs include Backswimmer, Water Scorpion, Giant water bug, water striders and water boatman.

Yes, they definitely bite a human.Any individual may be prone to bug bite especially people working outdoors, in wooded or rural locations.Children and older adults are more susceptible to severe reactions from a bug bite.

Water bugs are referred to as Toe biters because they do bite.Water bugs are harmless to humans.They don’t seek for people to go and bite them up.Water bugs bite is considered to be most harmful and painful.They bite on rare occasions when we get scared, or they get terrified. Usually, there are initial symptoms, but rarely they may cause life-threatening allergic reactions.

How does giant water bug bite or attack?

Giant water bug bites have a beak with little stout, and they inject their toxic saliva which contains proteolytic enzymes and leads to liquefying tissues further proceeding to paralysis of vertebrates.They grab their prey including fish, turtle, crustaceans, snakes, occasionally human toes and inject the poisonous saliva into that site.They play being dead when caught by people, and fluid is released through their anus to enhance this effecBut suddenly they arise to live and sting their prey.They have a particular hunting and feeding strategy.Giant water bugs bite has a proper use for spiders.They have a unique feature rostrum, used for sucking and piercing and has real effects on plants.

What are the symptoms?

Following are the symptoms caused by bug bite:

How to treat the bites?

There are many methods to treat the bites including home remedies along with medical treatment.

1. wash the affected bite area with water and soap.Make a lather thick soap foam on bite site.Rub it smoothly all over the surface repeatedly.Leave the soap for few seconds or minute and do not rub it off.Allow the soap to dry off on the bitten area.This will prevent itchiness and skin infection.

2. There are some home remedies to relieve itchiness:

3. Apply the over the counter steroidal creams like cortisone or 1% hydrocortisone.These creams reduce itching and inflammation.Use it correctly for a week and follow the instructions.

4. Use calamine lotion to help heal up the skin and give some soothing effect.

5. Apply antihistamines topically or take them orally, for example, Benadryl(Diphenhydramine).

6. Take analgesic, anti-inflammatory medications which may cause relief pain.There are many medicines which have these properties including, Aspirin, Naproxen or Ibuprofen.

Aspirin has analgesic and antipyretic effect; it relieves pain as well controls fever. Ibuprofen is the type of a NSAID  which helps in the reduction of hormones causing fever, pain, and inflammation.Acetaminophen is prescribed for children, is safer than aspirin.

9. You should seek medical attention if there are a severe infection like the discharge of pus, bleeding, breathing problems, allergic reactions, blisters.So that the doctor may prescribe you with injections of epinephrine, antihistamine or corticosteroid.

Water bugs are found in an aquatic environment including ponds and streams. They cannot survive in our home environment, so they naturally stay away from our homes. They are usually found in parking lots, porches, swimming pools. There are some ways to keep them away from your homes:

Reduce water sources to prevent these bugs from spreading. Remove any standing water in your yards, gardens or other open areas. Switch on your porch lights at all times so that water bugs do not infest your public places. Use insecticide sprays to get rid of them. Cover yourself fully with clothes and wear hats. Apply insect repellent creams on your bodies for adults and in lower concentration for children. Avoid wearing floral prints, wear colors with a neutral pattern with smooth finishing. Avoid wearing scented lotions or perfumes which may attract the bugs. Keep you leftover foods and water in a tightly sealed container to prevent any contamination. Use bug repellant sprays or citronella candles. Last but not the least call an exterminator for getting rid of water bugs.

There are many ways to get rid of Water bugs by using vinegar or alcohol spray, pouring cooking oil, using chemicals like algaecide which are shocking chemicals for your pool. Spray liquid detergent or cold water in that area.