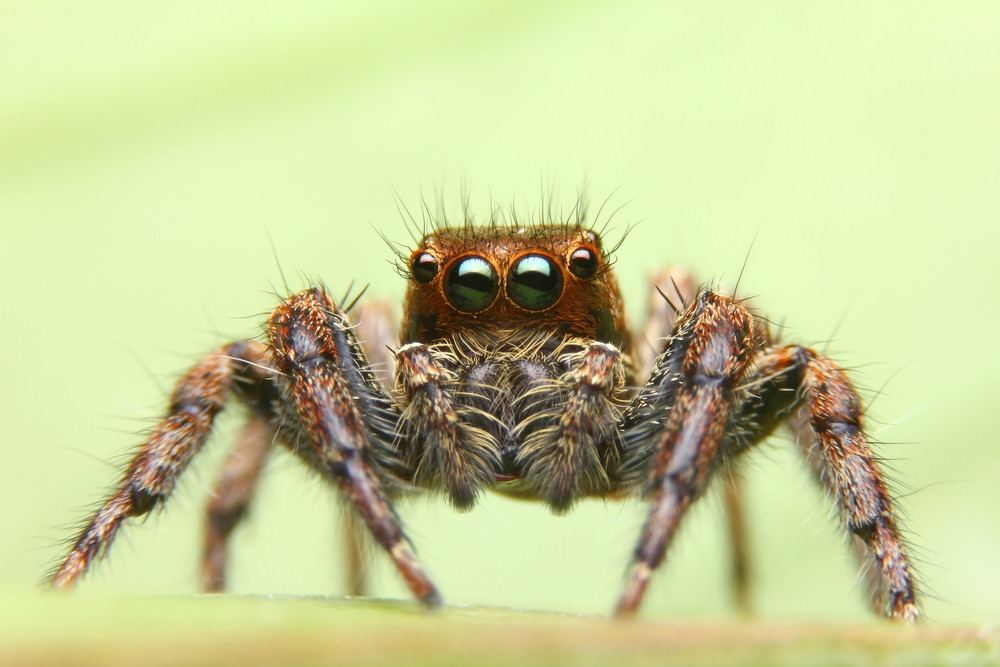 Imagine having four pairs of eyes, eight legs and a reputation for being a creepy, crawly critter. That’s the life of a spider, an arachnid found in nearly every corner of the earth.

These critters, as bad as their reputation may be, are fascinating to learn about. Let’s take a closer look at some of the most common species and learn some amazing facts about these primitive creatures.

Spiders are arthropods, which means they have segmented bodies and jointed limbs. They have eight legs in total (four on each side) that are covered in proteins and chitin.

A spider’s body has two sets of segments, which do similar things. 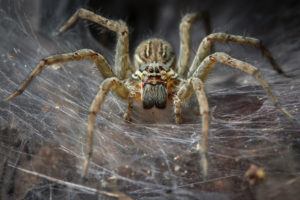 These critters are a part of the arachnids family (no, they are not insects). Arachnids have three parts that help them catch and eat food: fangs, “beards,” and pedipalps.

Most spiders have venomous fangs that fold away when they’re not in use. Their “beards” help filter out solid foods, as spiders can only consume liquid food. They also have pedipalps, which act as an extension of their mouths to help them eat.

Spiders also have the neat ability of moving their abdomens independently when they’re producing silk.

Spiders are coelmates, which means their body cavities are reduced to smaller areas around the excretory and reproductive systems.

These critters do have blood, and it runs through the hemocoel, which is a long cavity that runs through most of the length of the spider’s body.

Spiders, like humans, have hearts, but theirs is tube-shaped. The heart has a few ostia, which allows the blood to flow in, but does not allow the blood to leave before it reaches the end.

Spiders have open circulatory systems and have developed many different respiratory anatomies based on a tracheal system, book lungs, or both.

Some spiders have trachea, which diffuses oxygen and sometimes sends it directly to the organs and tissues. It is believed that the spider’s ancestors developed trachea to resist desiccation.

Spiders that have tracheae usually have a faster metabolism and are better at conserving water.

Spiders are unique because they have fangs, and most have venom glands that allow them to inject venom into their prey.

Some spider families, like the Holarchaeidae, Uloboridae and the Liphistiidae, no longer have their venom glands and kill their prey using silk instead. 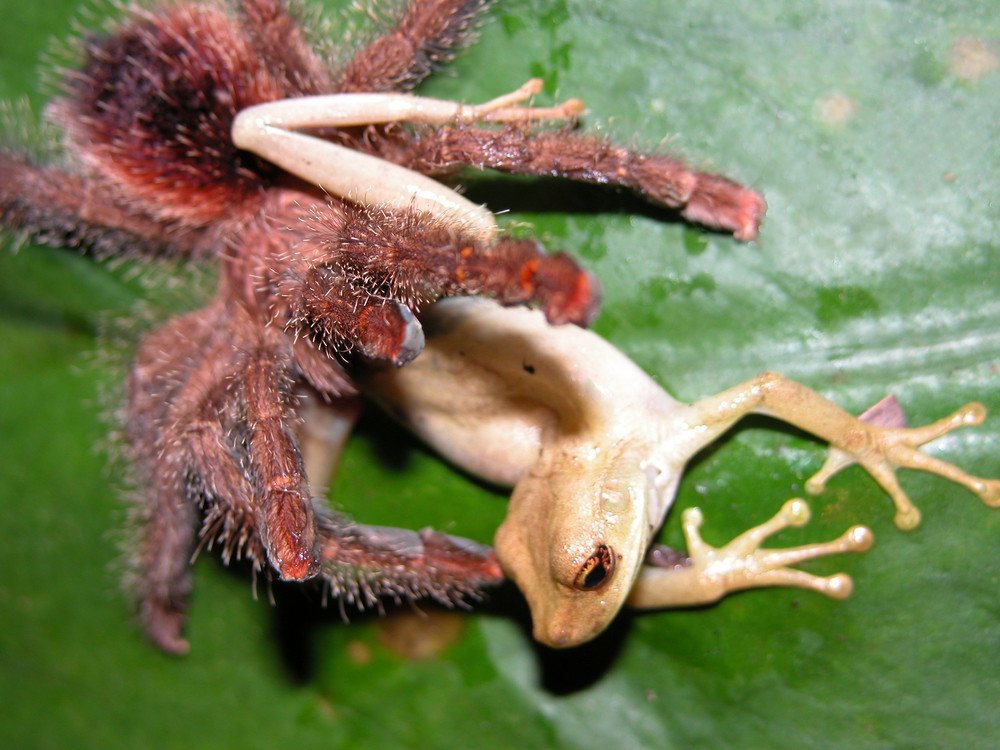 Because they have a narrow gut, spiders can only digest liquid food. In fact, they have two sets of filters to keep solids out.

Unlike humans, spiders digest food externally – and they have two different systems for it.

One type pumps out digestive enzymes from the spider’s midgut into its prey, which liquefies the victim’s insides. The spider can then suck up the liquid, leaving behind only the husk of the prey.

Other spiders grind their prey down to a pulp and inject enzymes.

The spider’s stomach acts like a pump, sending the food down into the digestive system. The midgut contains bacteria that extracts the nutrients from the food.

Most species of spiders convert nitrogenous waste into uric acid, which is excreted through the anus as a dry material.

Eyes are the spider’s main sense organ, and most have four sets on the top front of their heads. While most species have the same number of eyes, they may be arranged in different patterns, depending on the family.

The spider’s main set of eyes is called the ocelli, and they’re located at the front of the spider’s head. With other arthropods, these eyes can only detect which direction the light is coming from. But for spiders, their ocelli can actually form images.

Spiders also have secondary eyes, which are used mainly to detect reflected light. These eyes are immobile, unlike the ocelli, which have muscles.

Jumping spiders have exceptional eyesight that far exceeds that of dragonflies, which have the best eyesight of all insects. These spiders have multiple lenses with telephoto-like properties and a four-layer retina that allows the spider to swivel its eyes.

Along with their eyes, spiders also have a multitude of sensors in their cuticles. They also have setae, which are bristle-like and act as touch sensors. These sensors are very sensitive and can even detect weak currents of air.

Setae can also trigger chemical reactions that are equivalent to our sense of smell and taste.

Spiders don’t have acceleration or balance sensors, so they use their eyes to determine which direction is up. 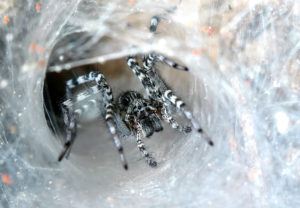 Spiders produce silk using their spinnerets, which are located in their abdomens. They can have between one and four pairs of spinnerets, although most have three.

Spider silk is made mostly of protein, which hardens as the spider stretches it out. It’s comparable to nylon in terms of strength, but it’s far more elastic.

Tarantulas actually have silk glands in their feet. Some species of spiders don’t even build webs to catch prey, but they use their silk in other ways, like as wrappers for sperm, a safety rope, parachutes for safe landings, or for nest-building.

Spiders catch prey in a variety of ways, but the most common way is through a sticky web. The placement of the web typically determine the type of insect that will be trapped.

Spiders are mostly solitary creatures, but there are a few species that will build large communal cobwebs and exhibit some social behaviors. But their behaviors aren’t quite as complex as other social insects.

Some of these social spiders can form colonies with populations of 50,000 or more. 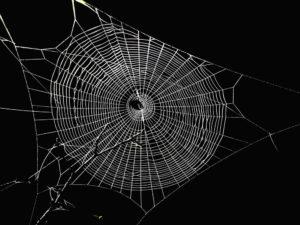 There are two main types of spider webs: tangleweb (cobweb) and orb web.

Orb webs, unfortnately, aren’t all that effective. About half of the prey caught in an orb web escapes. These webs have hubs just above the center, where spiders lurk.

Most orb webs are built horizontally even though they tend to be less effective than vertical webs.

Spiders will sometimes attach decorations to their webs, which are highly visible silk bands. Research shows that webs with more decorative bands can catch more prey per hour.

The other main type of web is called a cobweb, or tangleweb. These three-dimensional webs have tangled, irregular strands.

Spiders must mate to reproduce, but reproduction is very different from what most of us are used to.

Male spiders do not produce packages of sperm and they do not insert their sperm directly into the female’s body.

Instead, they spin sperm webs into which they ejaculate. The sperm is then transferred to its palpal bulbs, which are syringe-like structures.

Spiders have elaborate courtship rituals that help prevent the females from eating the smaller males.

Sometimes, precise vibration patterns are used to court females. In other cases, male spiders will touch females in certain ways to literally hypnotize her.

Females can have simple or complex reproductive tracts. Some can store sperm and release it whenever they want.

Female spiders can lay up to 3,000 eggs in egg sacs. Sometimes, the females die shortly after laying their eggs.

Most species of spiders live for one to two years, but some tarantula species can live more than 20 years in captivity. 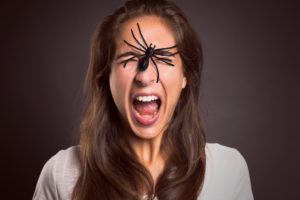 Still, unless you know for sure that a spider bite is from a harmless species, it’s important to see a doctor as soon as possible to treat the wound.

While spiders are creepy-crawly and have a tendency to freak people out, they can also be beneficial to humans.

Many species of spiders actually prey on pests that ruin our gardens and make our backyards uncomfortable, like mosquitoes, roaches and flies. They also help kill other spiders, particularly venomous spiders.

Arachnophobia – a fear of spiders – is one of the most common phobias in the world. Whether it’s a subconscious fear instilled in us from our ancestors or a learned fear through our culture, just about everyone is afraid of spiders to some degree.

But arachnophobia is a very real and common phobia that can cause people to avoid places where spiders might be. Bad spider encounters are often the cause of this phobia.

The good news? There is help out there for this phobia, and therapy is highly effective.

4. Spiders in Symbolism and Culture

Spiders have long been a part of mythologies and stories. In some cultures, spiders are viewed as mischievous because of their venomous bites. In other cultures, this creature is a symbol of patience due to the spider’s hunting technique of setting web traps and waiting for its prey.

8 Best Spider Repellents Worth to Buy