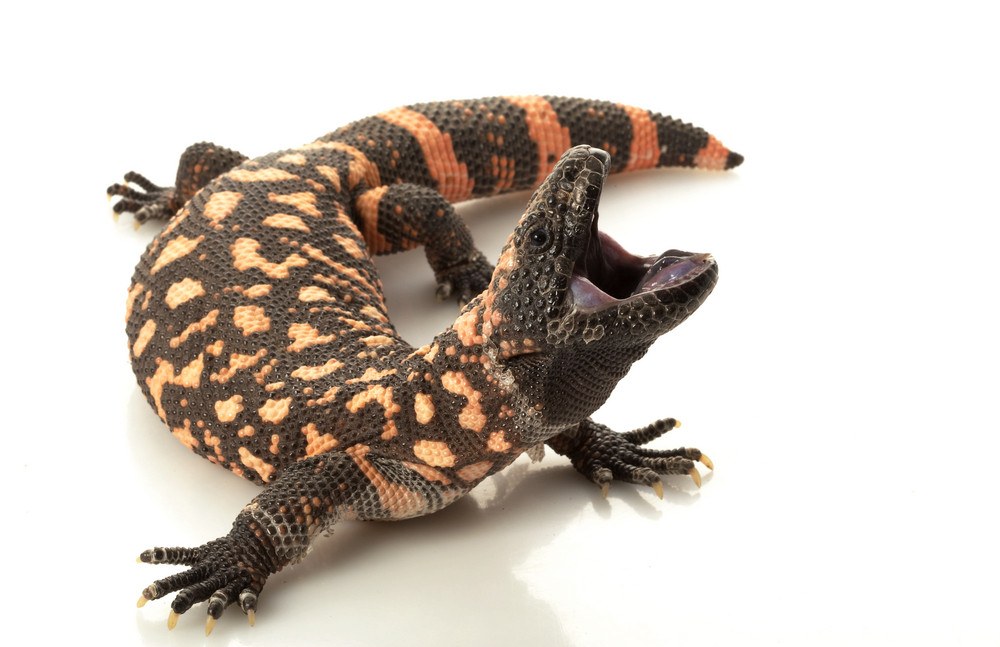 In daily life, many people consider lizards as weird looking reptiles with scary appearance. Although many of the lizards that people face in routine life are harmless and they can not hurt humans. Rather they just only defend themselves if approached by humans. But there are few species of lizards that can be super dangerous for people. They can hurt, can give average level injuries and can even kill the person. Few of these species are quite aggressive in nature and more frightening by looks than snakes. Here we will discuss two of most dangerous lizards’ species Gila monster, and Mexican beaded lizard.

As its name depicts, the Gila monster is a dangerous species of lizards whose scientific name is Helodera suspectum. They are the largest lizard species in the United States with the body size of almost 20 inches in length. Its body is sturdy, contains pink and black spots with beady scales. This lizard was named after the Gila River. It can be seen in various parts of U.S. states of California, Arizona, Utah, Nevada, and New Mexico. During winters, Gila monster stays hibernated and takes their energy from the fat accumulated in their tails and abdomen. During summers, they consume birds, little mammals, and eggs during night. The giant head and powerful jaw of Gila monster produce a sharp bite that stays inside victim’s body until venom percolates in the wound.

Another dangerous lizard species that has many similarities with Gila is Mexican Beaded lizard. It can be found numerously along the Pacific shoreline of Mexico. With the body size of 32 inches, Mexican beaded lizard is vaguely larger than Gila. Its body color is also slightly darker as compared to Gila’s body color. It is otherwise similar to Gila in appearance and habits. They also hibernate in winter sand insert their venom through the grooves of their teeth. Like Gila, the lifespan of Mexican beaded lizard is also up to 30 years.

How venomous are they & danger to human

Lizards are usually not considered as venomous reptiles, but the fact is slightly opposite to it. Among 5000 different lizard species, there are almost 100 species which are considered venomous, and they possess venom. Unlike poison, venom is a toxic material that is infused into victim’s body purposely. Among toxic species of lizards, the major two are Gila monster and Mexican beaded lizard. Other reptiles include Monitor Lizards that contain further 30 species and the most dangerous and popular among them is Komodo dragon. Other hazardous lizards include Iguanas.

Though these lizard species are venomous, there are only a few cases ever recorded of human death as a result of their bite. The bite of Gila and Mexican beaded lizard can result in nausea, infection and respiratory problems. Other lizard bites may result in infection, pain, weakness, headache, thirst, swelling and heavy bleeding. The cases of human deaths are rare because these lizards usually stay away from quarrel and just try to get away safely. They only bite humans when they feel danger and handled improperly.

Do they bite and how

Lizards only bite when they are handled inappropriately. Unlike snakes, they use their teeth to inject venom instead of fangs. After biting, they hold their victim and pass venom into the wound by soaking grooves in the teeth. They stay hanged with their victim hardly and are not easy to remove once the have bitten their victim. As the jaws of these lizards are too powerful, therefore there are huge chances of severe injuries. Their hard bite can even spoil blood vessels, tissues, joints and even bones. Tissues might get damaged during lizard biting or during efforts of removing lizards. Unlike snakes, there are very few chances of dry lizard bites that do not involve pouring venom.

1. Symptoms at the site of a poisonous lizard bite

The symptoms that appear at the place of lizard bites include:

General symptoms and side effects that might cause as the result of poisonous lizard bites include:

How to treat the lizard bite

If a venomous lizard bites the person, then medical assistance should be requested immediately. Any delay may result in dispersion of symptoms, and that can be proved fatal.

Firstly the victim should be kept calm, warm and quiet. Any tight clothing or jewelry should be removed immediately. Otherwise, the swelling would make it difficult to remove them. Poison control center should be called without delay. They will identify the type of poison and its further treatment. The affected area should be kept below heart level. The marker should be used to mark the level of swellings after every 15 minutes. It would help health care to identify the level and speeding of venom spreading inside the body. A sawyer’s extractor device should be applied over the bitten area after five minutes.

The conventional treatment of lizard bite would include:

In the case of any emergency or not the availability of any helper, the victim should not hesitate to call for help.

Even after getting first aid and basic treatment, a victim must go to see a doctor. Because lizards bite can be more dangerous and fatal, and the only expert can treat it properly.

Venomous lizard bite should be prevented instantly; the otherwise excessive amount of venom might get enter inside victim’s body. If the lizard is attached to a victim through its teeth, then they should not be detached by pulling. Otherwise, there is a huge possibility that lizard would hold the victim even more tightly resulting in increased damage. Following tricks should be applied to remove animal:

With the help of plier (a useful hand tool), the powerful jaws of lizards can be put apart, and the victim can be escaped from attacking animal.

Putting a flame under the chin of lizard would also force the animal to leave the victim.

The easiest and effective tip is to dip the animal as well as the victim body’s part inside the water. It will also help in escaping from lizards

Other useful tips are put the feet of lizard on ground. It will eliminate the fear of falling from the lizard, and it will leave the victim’s body.

Lizard no matter venomous or non-venomous is not much dangerous for humans. The reason behind is being their non-aggressive nature. But, as we have mentioned above few lizards can attack humans brutally on getting scared or disturbed. Therefore, care should be taken while encountering any of these venomous lizards.