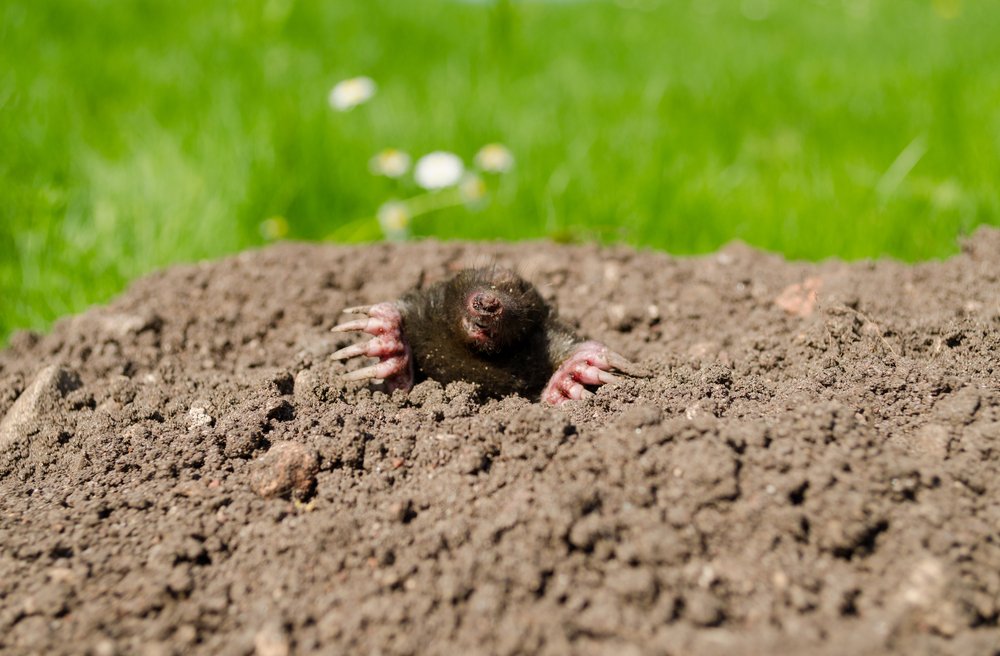 Moles are small fossorial mammals that have evolved to live in a subterranean lifestyle. Mostly, the term is used for true moles and they belong to the Talpidae family. Moles are generally found in parts of North America, Europe, and Asia. However, the term ‘moles’ is also used for other distinct mammals that have an appearance like moles but they are completely unrelated. These animals have the same body plan like moles but they live in parts of Southern Africa and Australia.

A female mole is a ‘sow’ and a male mole is called a ‘boar’. Labour is the name of a group of moles.

The status of moles in different countries is different. In some countries, it is an agricultural pest and in some other countries, it is a protected species. Then there are some other countries, where the fur of these animals is used to make the mole-fur garment. This garment was first worn by the wife of Edward VII of the United Kingdom, Queen Alexandra. This started a trend of wearing mole-fur garments, which solved a huge pest problem of Scotland and started a new lucrative industry in the country.

If you do not live in Great Britain and your country has been left untouched by the mole-fur garments, then this article is for you. Why? The reason is simple; if you don’t want a garment out of these fossorial mammals then something has to be done about the serious issues they are causing. And how do you get rid of moles? By setting a mole trap! And how to set a mole trap? That is the question we will answer in the remaining article.

The modern mole-catching methods have not been proven useful, poisons, which were actually successful were banned because of the harm they cause and the other methods such as sonic devices, mothballs, holly leaves, castor oil, and garlic haven’t proven to be very much successful. 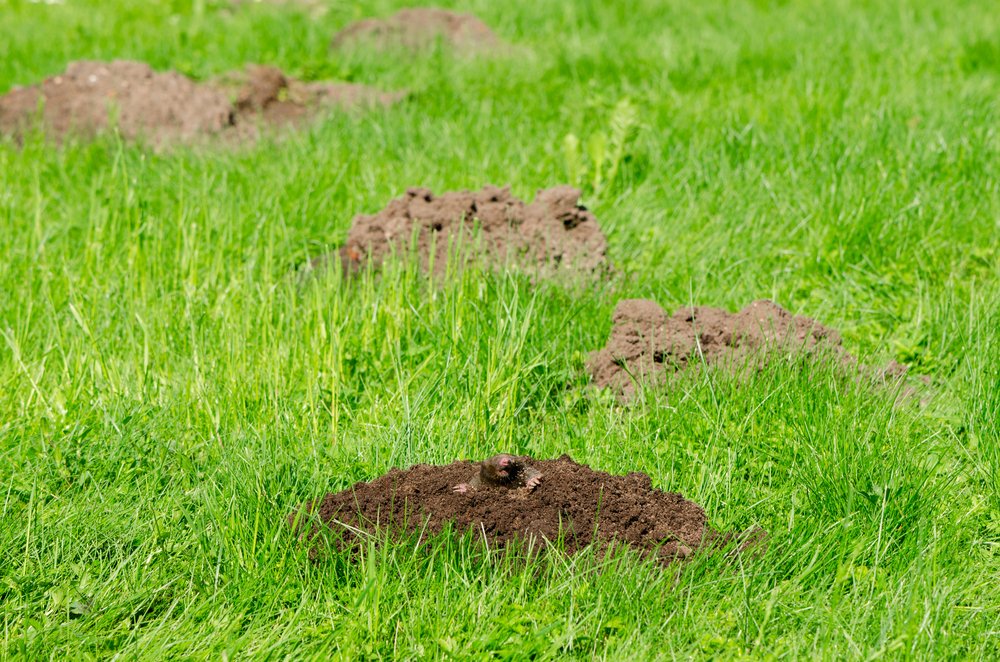 The complicated yet advanced traditional snares have evolved from wood to sprung steel and can be used by us, common people as well.

So, now we will see how to set the different types of mole traps and effectively make your field/garden mole-free.

How to Set a Mole Trap

There are many different types of mole traps out there, and we’re going to talk about how to set two of the most popular brands of traps. But first, let’s talk about setting traps in general.

You can use two different types of traps to catch moles: spring or live.

Regardless of which type of trap you use, you’ll need to place it in an active tunnel.

But how do you find an active tunnel? Walk through your yard and step on any tunnels you see in one or two places. Stepping on the tunnel will cause it to collapse in that area.

Check these spots the next day. If the tunnel has been dug out again, you know it’s an active one. These are good places to lay your trap.

It’s always best to locate active tunnels before setting any traps. Setting a trap in an inactive tunnel is just a waste of time, and you may accidentally catch other wildlife in the process.

Live trapping is pretty simple and straightforward. Keep in mind that the population density of moles is usually no more than three per acre, so you’ll probably only need to trap one to get rid of the problem.

The biggest issue you’ll have is finding a place to release the mole once you’ve caught it. You may want to drive around the area to find a suitable place where the mole won’t bother other people.

To set a live trap, you can try placing a deep bucket underneath an active tunnel.

If set properly, the mole will move through the tunnel and fall into the bucket. Once he’s in the bucket, he won’t be able to get back out.

The trap should be checked daily. As soon as you’ve caught the mole, you can relocate it.

Spring-loaded prong or choker-loop traps are some of the most effective and time-tested traps out there. These are activated when the mole pushes up against them.

If setting a spring-loaded prong trap, you’ll want to start by flattening an area of the tunnel that’s just a little bit bigger than the base of the trap and then set the trap over it.

Make sure that you follow the manufacturer’s directions when arming the trap.

We recommend covering the trap with a 5-gallon bucket to keep kids and pets away. Once the mole has been caught, you can remove the bucket and the trap.

If you’re not having any luck after several days, you may need to try a different tunnel.

How to Set a Tomcat Mole Trap

The Tomcat Mole Trap is a safe and sure method to control the moles. This is a hands-free trap that is fast and easy to set. So, let us see how to set it.

This is the first and the most important step in order to set the trap. Setting in the main runway of the moles is the first necessity of this trap. Main runways are the tunnels that are used the most by these moles. These tunnels more often than not run along the perimeter of your yard. Among the many tunnels that might be in your yard, which one is the main runway? Simply, find a tunnel and puncture it without destroying it. Mark these holes with a flag or sticks and check the tunnel after a day or two. If you find that the puncture that you created has been repaired, then this is the main runway that is used by the moles.

Now, you will have to prepare the tunnel before attempting to set up the trap. For this, create an indentation in the center of the active tunnel. Create this indentation using your heel and make sure that the indentation is at least 1-inch in size. This indentation should fit the Depth Gauge of the trap.

Now use the trap jaws of the Tomcat Mole Trap and mark the channel on both sides of the indentation. Now use a lawn edger to cut 5-inch deep opening to insert the trap.

Now just insert the trap in the openings you have just made.

Now step on the yellow foot pedal and push it until it latches and trigger post activates.

Now, push the foot pedal so that the post flush is triggered. Ensure that the base of the trap touches the ground. The trap is now activated.

Now, when you see that the foot pedal is raised that means the mole is trapped. To remove the trap, place the trap in a bucket and compress the pedal.

How to set a Victor Mole Trap

This step is same as the first step of Tomcat Mole Trap.

Make sure that the depression you create in the main runway collapses the tunnel so that the Plunger-Style mole trap can be put to use. 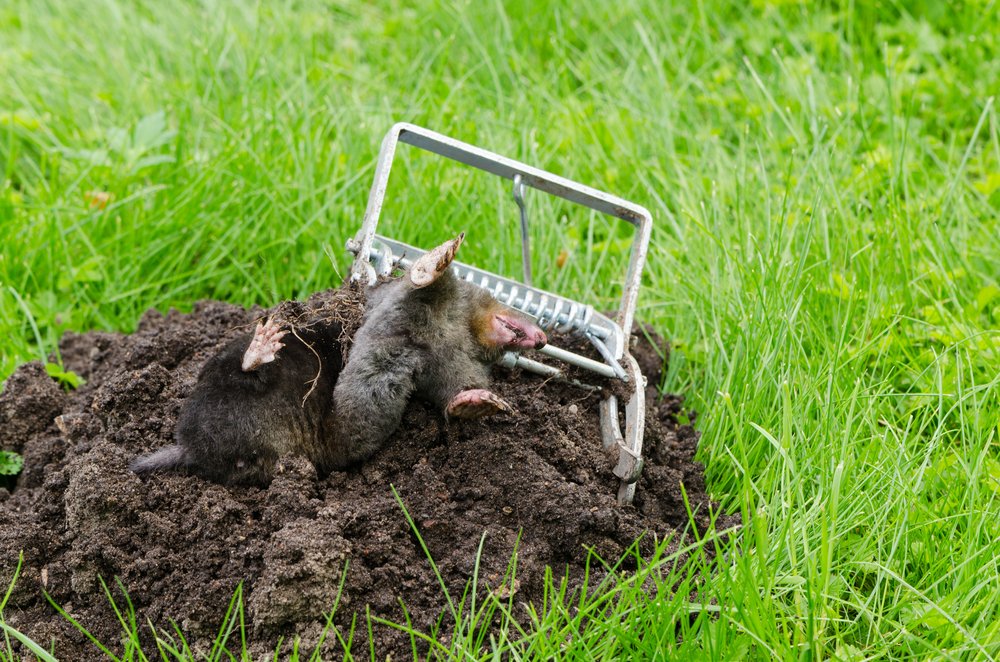 Now, insert the trap in the depression you have created, and make sure that the spikes on the Plunger-Style mole trap do not block the tunnel below. The trigger pan is the metal square that is located below the trap; make sure that this pan is placed directly over the depression. Now press the trap so that the spikes on the side go into the ground.

Pushing the side spikes up and down will make the soil loose, making the trap efficient.

If you have pulled the plunger up and down enough times, then the trap latch will snap into place. Your trap is now set.

If the mole happens to burrow through the trap, the spikes will be pulled down and trap the mole.

Now you can easily set up a mole trap and get free from the fuss created by these small mammals.