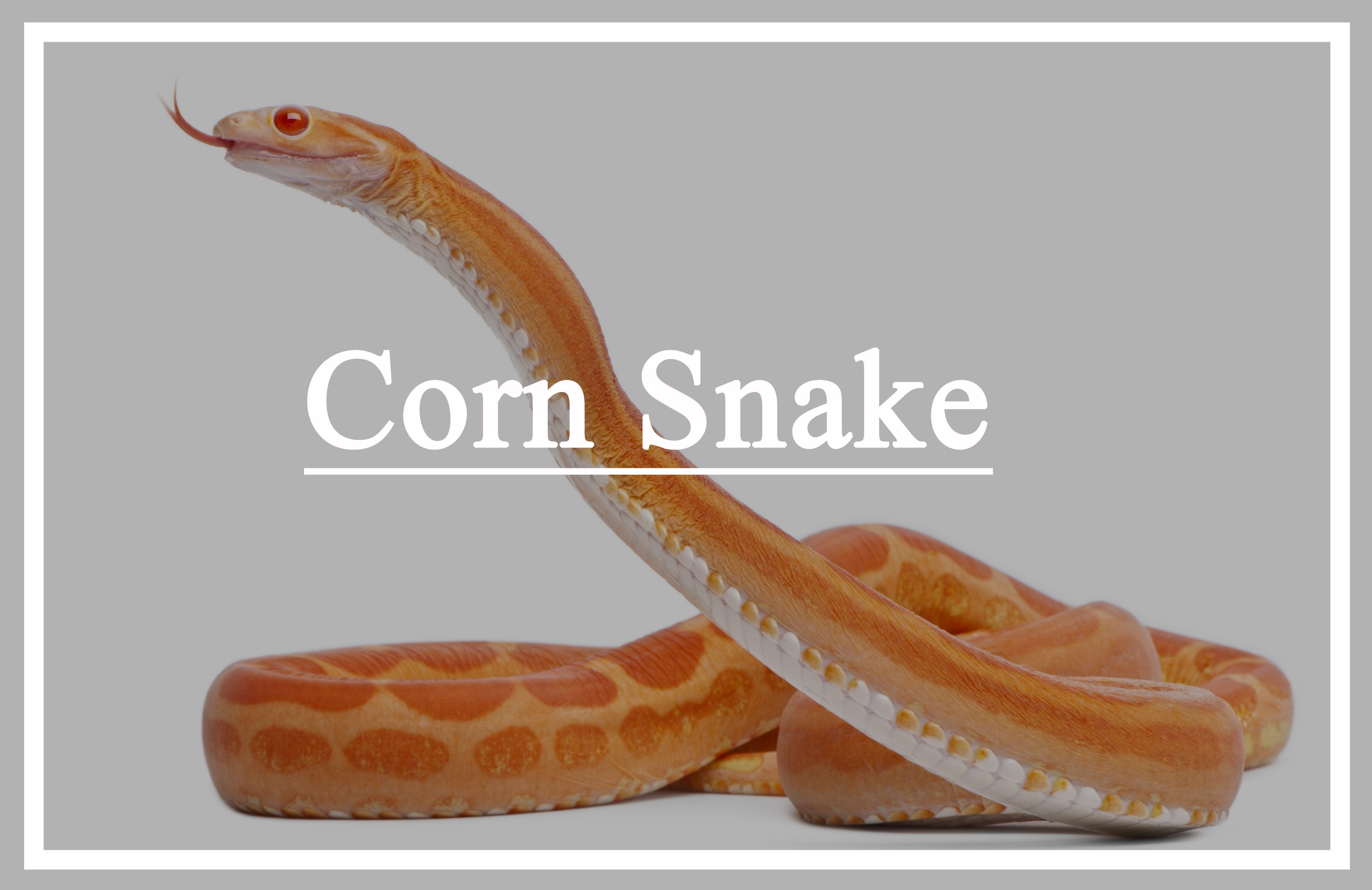 The corn snake, or Pantherophis guttatus, is a species of rat snake native to North America. Because of their docile nature, attractive appearance and moderate size, the species is a popular pet snake.

Whether you’re thinking of adopting a corn snake as a pet or are just an avid fan of snakes, it helps to learn more about this fascinating species. From basic facts to morphs and conservation methods, we cover it in this fact guide. 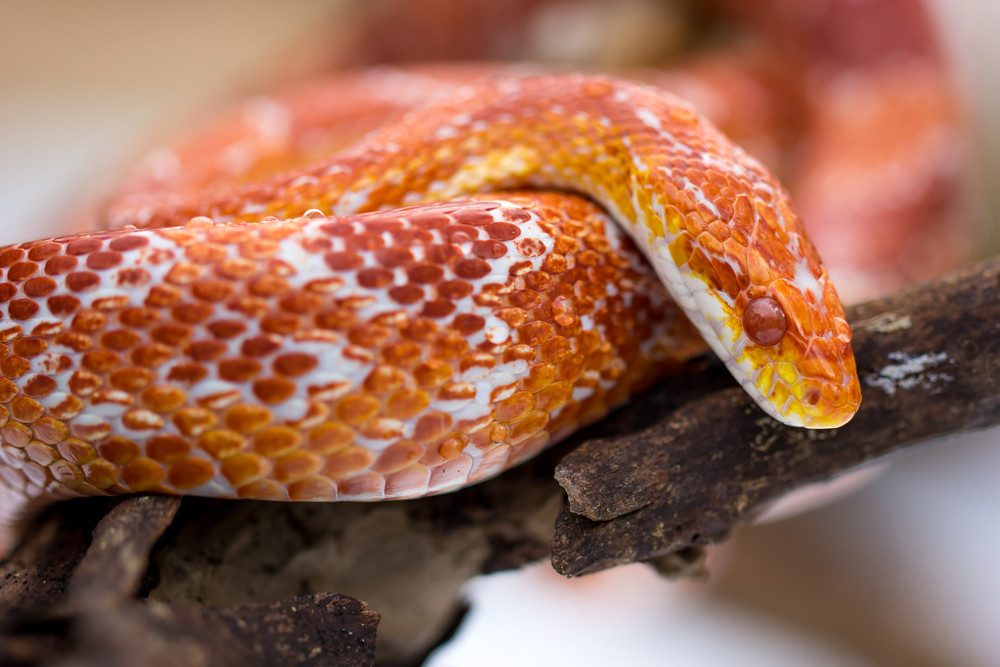 From size to eating habits, reproduction and lifespan, we’re going to cover all of the basic facts about corn snakes to help you learn more about this creature.

According to the Oxford English Dictionary, this snake’s name dates all the way back to 1675.

The corn snake is so aptly named because of its corn-like appearance, although some argue that this snake got its name because it likes to hang out near corn. The checkered pattern of its belly scales closely resembles Indian corn kernels.

Others say these snakes get their name because they tend to live near corn fields – a favorite place of rodents. No matter the origin of the name, these snakes are beautiful to look at and beneficial in a number of ways.

Corns have a distinctive spear-like marking on their heads and usually have dark vertical bars on their lips. Most have round pupils and red or orange eyes.

Corn snakes are closely related to rat snakes, and are often called “red rat snakes.” Most have vibrant red or orange backs with a black and white pattern on their bellies. While not aggressive by nature, these snakes will let you know if they’re feeling threatened or afraid.

Adult corn snakes have a slender body that ranges anywhere between 2 and almost 6 feet in length. The biggest corn snake on record was 72 inches long.

When in the wild, these snakes can live 6-8 years, but when kept as pets, maximum life expectancy is 23 years or more for a healthy snake.

Corn snakes are docile, or non-aggressive, which is a big part of the reason why they’re popular pets. They don’t mind being handled by their owners, even for long periods of time.

Corns love to burrow and hide, which can make them fun to watch in the wild.

These snakes may be nocturnal or diurnal animals, meaning they can be active during the day or at night. But they’re usually nocturnal in hot weather.

Corn snakes will vibrate their tails if they feel threatened. They aren’t venomous and aren’t a threat to humans.

Corn snakes are carnivores (or meat-eaters), and they eat every few days when they’re in the wild. Just like the pet snakes you see on TV, corns love to eat mice. The white-footed mouse is one of their favorite foods. 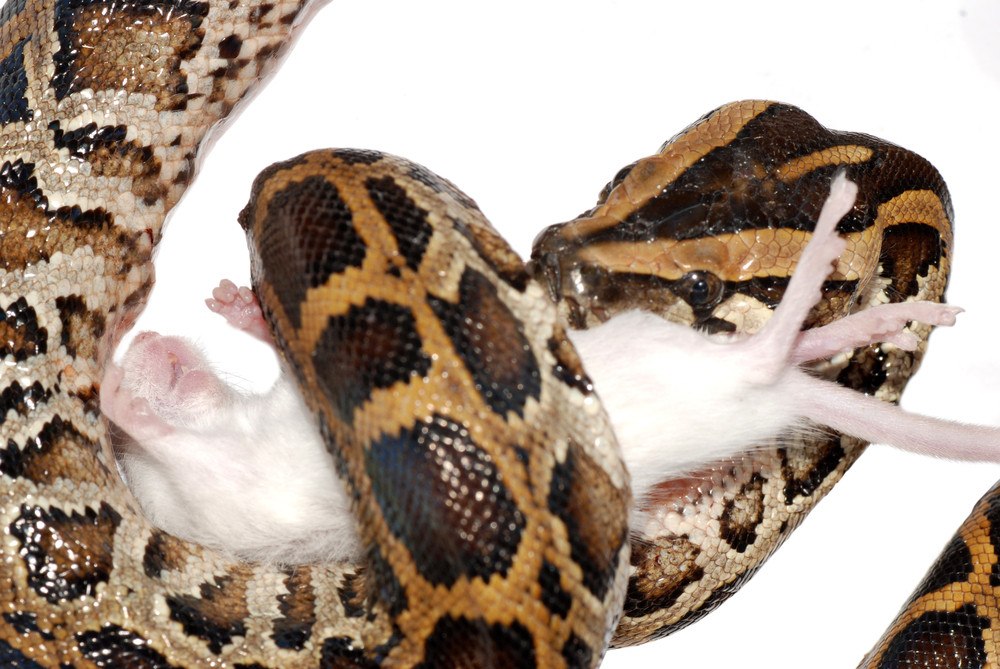 But along with rodents, these snakes will also eat frogs and other amphibians. They’ll eat reptiles, too. And if they’re feeling adventurous, they’ll climb trees to snack on unguarded bird eggs.

Once they track down their prey, corns use constriction to kill, meaning they squeeze their prey tightly until it suffocates and dies. Once they’ve successfully killed their prey, they swallow their dinner whole – and head first. Sometimes, corn snakes swallow their prey whole while it’s still alive.

Snake enthusiasts love corn snakes, and that’s partly because they’re so easy to breed. When they’re in the wild, corns usually breed after winter. But some experts say they breed in the fall and the spring.

Females lay eggs about a month after mating. Most lay between 12 and 24 eggs, and they hide their eggs in hidden, moist and warm areas. Decaying vegetation and rotting tree stumps are great places for moms to lay their eggs because the heat helps incubate the eggs. Corn eggs have a leathery shell and an oblong shape.

Female corn snakes take a lax approach to motherhood. Once they lay their eggs, they abandon them and never comes back.

After about 10 weeks, those abandoned baby corn snakes break out of their shells using a special egg tooth. They use this sharp tooth to carve slices into the egg shell. Babies are about 10-15 inches in length when they emerge from their eggs, and are forced to fend for themselves from the moment they’re born.

Corn snakes are ready to start mating at around 18-36 months of age.

Corn snakes can live in a variety of wild habitats and they’re most commonly found in the southeastern United States. These slithering creatures have been spotted as far north as New Jersey and as far south as the Florida Keys. A few rare sightings have been seen as far west as Texas.

These snakes prefer to make their homes in forest openings, overgrown fields, abandoned buildings and palmetto flatwoods. They can be found on flat land, or they may live in areas as high as 6,000 feet.

Think you can escape a corn snake? Think again. Most corn snakes stay on the ground until they’re four months old, but adults can easily slither up cliffs, trees and other high surfaces.

In the winter, corns may move underground or live in stump holes. Some slither their way into abandoned buildings to find shelter from cold weather.

When kept as pets, domesticated corn snakes prefer to live in 30- to 40-gallon tanks. They also prefer an ambient air temperature of 75F to 85F.

Because corn snakes are popular pets, you’ll find many variations with different patterns and colors. In fact, corns are the most commonly bred species of snakes in the U.S. Some of the most common morphs include: 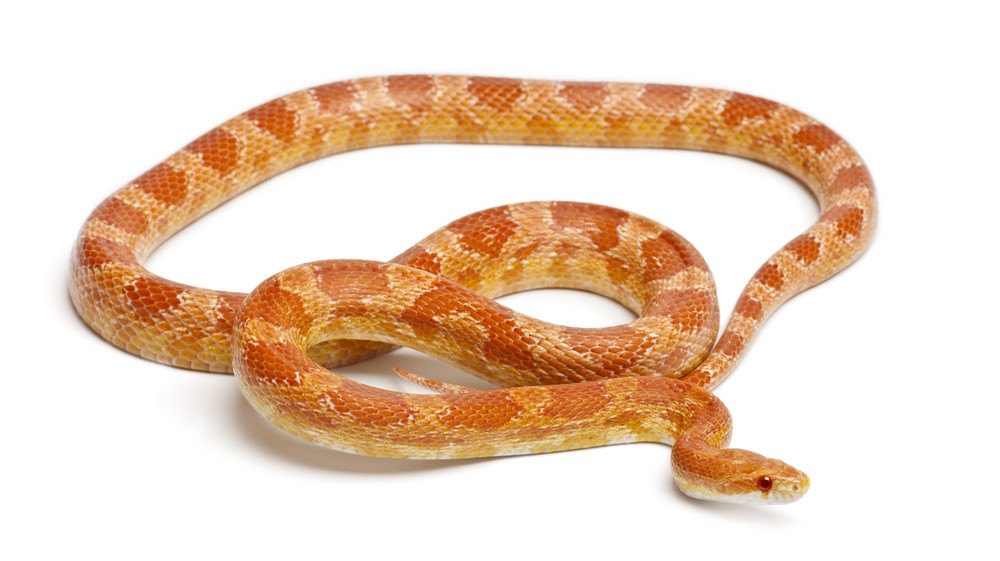 As hatchlings, snow corns are white with pink spots. As they age, their spots fade. Adults usually have a yellow neck and throat. They may also have light background colors and blotches with shades of green, pink, beige, ivory or yellow. This breed of corn snakes has pink eyes with dark pink pupils.

Black corn snakes don’t have the pigment erythrin, which is needed to produce yellows and reds. As you may have guessed, these snakes are either black or gray.

Just like its name suggests, lavender corn snakes have a pink body with dark purple/gray markings. These beautiful snakes have ruby or dark purple eyes that enhance their exotic look.

Corn snakes are often mistaken for copperheads, which are venomous and dangerous, and killed as a result. But experts say the two are easy to tell apart if you know what to look for.

Markings are the best way to determine whether you’re dealing with a corn or copperhead snake.

Also, copperheads do not have a black and white checkered belly.

Corn snakes are protected in the state of Georgia, but the IUCN lists this species under “least concern.”

Corns have a large population and are widely distributed throughout the eastern U.S. In other words, corn snakes aren’t going anywhere anytime soon. And why should they? They make great pets and are beneficial to humans in many ways.

With that said, corn snakes do face threats. Accidental killings and habitat destruction are the two main threats to this snake’s survival.

Other fun facts about corn snakes

Corn snakes are great to have around if you own a farm. These slitering creatures prey mostly on rodents that destroy crops and spread disease. Sure, cats are a great way to keep your mice problem under control, but you don’t have to care for wild corn snakes.

2. They also have pattern morphs

Along with color morphs, corn snakes can also have a variety of pattern morphs, including:

3. They only have a few health problems

Corns are one of the healthiest species of snakes and rarely have health issues outside of problems that affect all snakes (i.e. respiratory infections, mites, parasites, etc.)

With that said, this species can have issues with shedding.

Under normal, healthy conditions, a corn snake’s eyes will turn opaque and blue 4-5 days before it sheds. They’re usually a little shy around this time and may skip meals.

But if the cage is too dry, a corn snake may shed its skin in pieces. When this happens, bacteria can grow where the skin gets stuck.

Some female corn snakes may also have issues with egg binding. This occurs when females don’t lay all of their eggs. When this happens, it creates a fat deposit above the cloaca, known as hips. Egg binding is a serious problem that needs to be checked by a vet immediately.

4. They’re members of one of the largest snake family communities

Corn snakes are a part of the Colubridae family, which makes them relatives to garters, kings, waters, milks, pines and bulls.

5. There are hybrid corn snakes

It’s common for people to breed corn snakes with other snake species in captivity, but cross-breeding rarely happens in the wild. 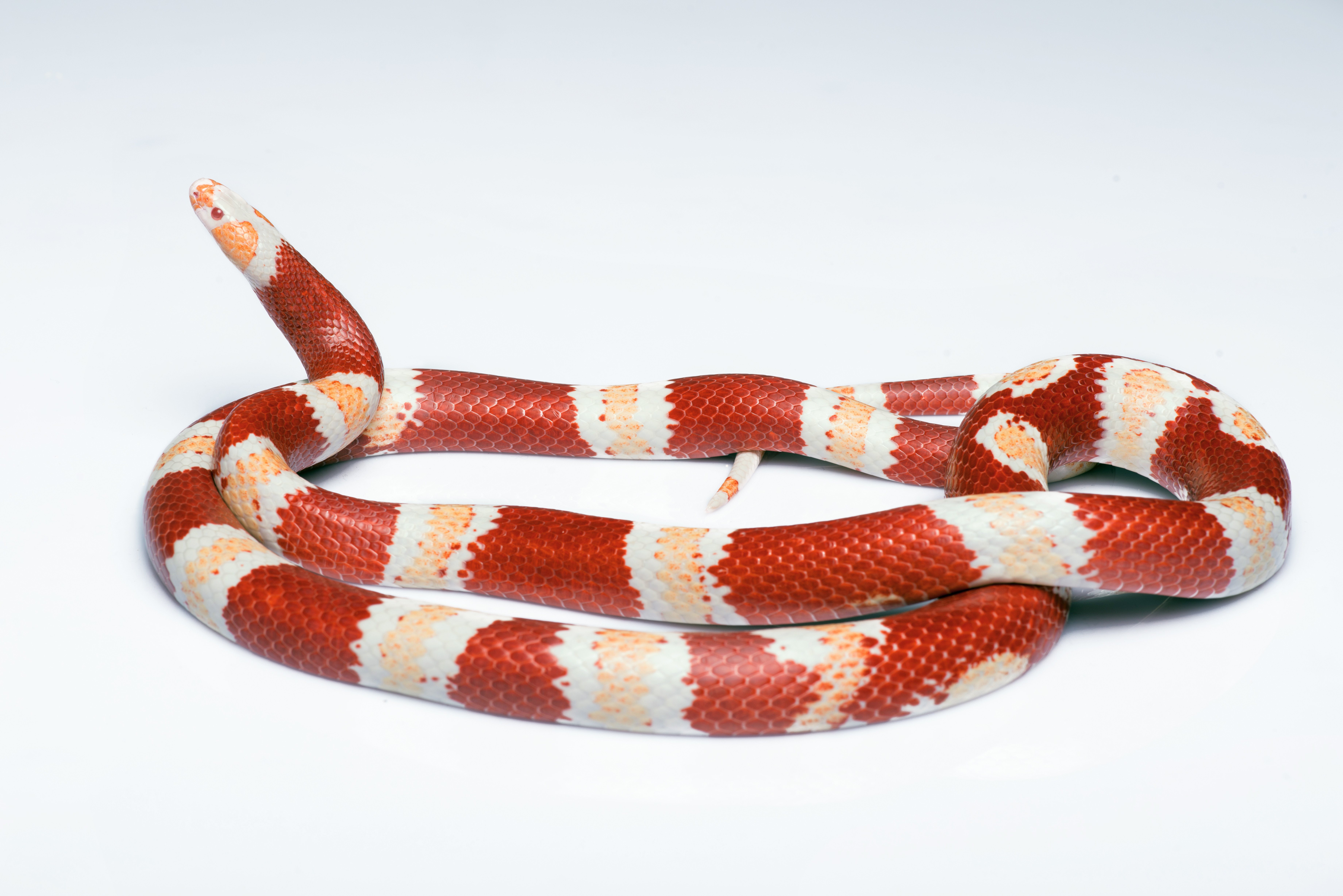 Some of the most common corn snake hybrids include:

Jungle corns are a mix of the corn snake and the California Kingsnake. These hybrids have extreme patterns and take markings from both parents.

Tri Color Jungle hybrids have corn snake and Queretaro Kingsnake parents. Their color is similar to an albino corn snake.

Turbos are a mix of the corn snake and the Pituophis species.

A mix of an Emory’s Rat snake and a corn snake, the Creamsicle have an even brighter yellow/orange color than regular albino snakes. The first generation of hybrids is known as “rootbeers.” When rootbeers breed, they produce creamsicle corn snakes.

The Brook Korn snake is a hybrid between the corn snake and the Brook’s Kingsnake. Just like with jungle corns, these snakes have extreme and striking patterns.

Corn and milk snakes are often bred to create different hybrids with their own unique names.

Other hybrids exist, but these are the most common types. Hybrids can sometimes be found in the wild, and they’re usually a cross between a corn snake and a Pantherophis species.

With a docile nature, beautiful appearance and easy care, corn snakes make wonderful pets. But they’re also beneficial to humans in the wild because they keep rodent populations under control. Now that you know more about this slithering species of snake, you can better appreciate its positive qualities.