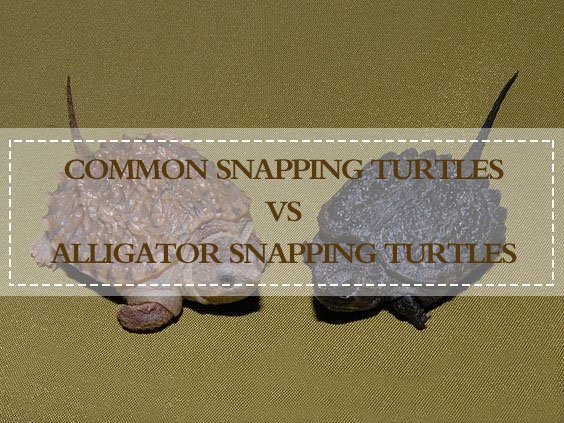 But these turtles are not the same. In this article, we will discuss the differences between the Common Snapping Turtle and the Alligator Snapping Turtle. So watch out for your fingers and toes, because we’re diving deep into the world of snapping turtles. 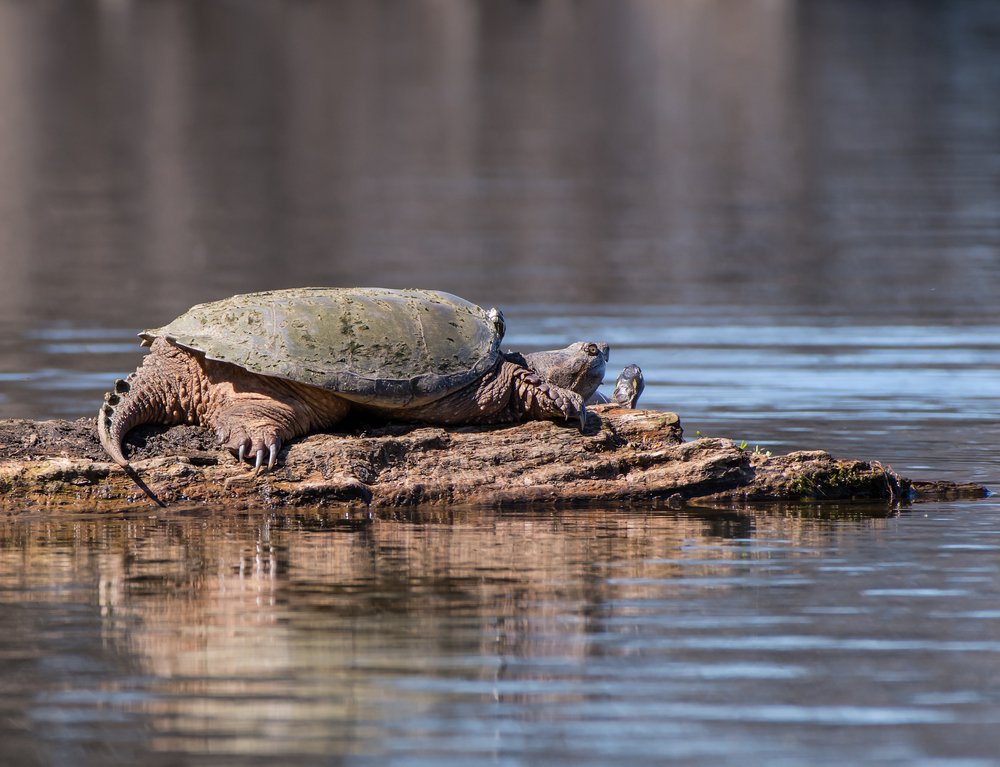 The first thing to establish when talking about Alligator Snapping Turtles vs Common Snapping Turtles is how to identify them. Both of these species are large, heavy, scaly aquatic reptiles, so it might seem that it would be hard to tell them apart. But if you ever saw one of each species side by side, you would quickly start to see the difference.

Another key difference between these two turtles is their tongues. It might seem strange to identify turtles by looking inside their mouths, but snapping turtles aren’t shy about keeping their mouths open, ready to bits. Just make sure you don’t get too close!

Next, take a look at the turtle’s eyes. Alligator Snapping Turtles have very distinctive scales that surround their eyes in a star-shaped pattern. These scales look almost like small spikes and are intended to protect the turtle’s eye. Many people refer to these spikes as eyelashes, though they are quite different from the eyelashes humans have! Only Alligator Snapping Turtles have these ‘eyelashes’ – common snapping turtles don’t.

These are all features you can use to tell a Common Snapping Turtle from an Alligator Snapping Turtle. As we will see in the following sections, there are other differences between these two types of turtle that we will explore. 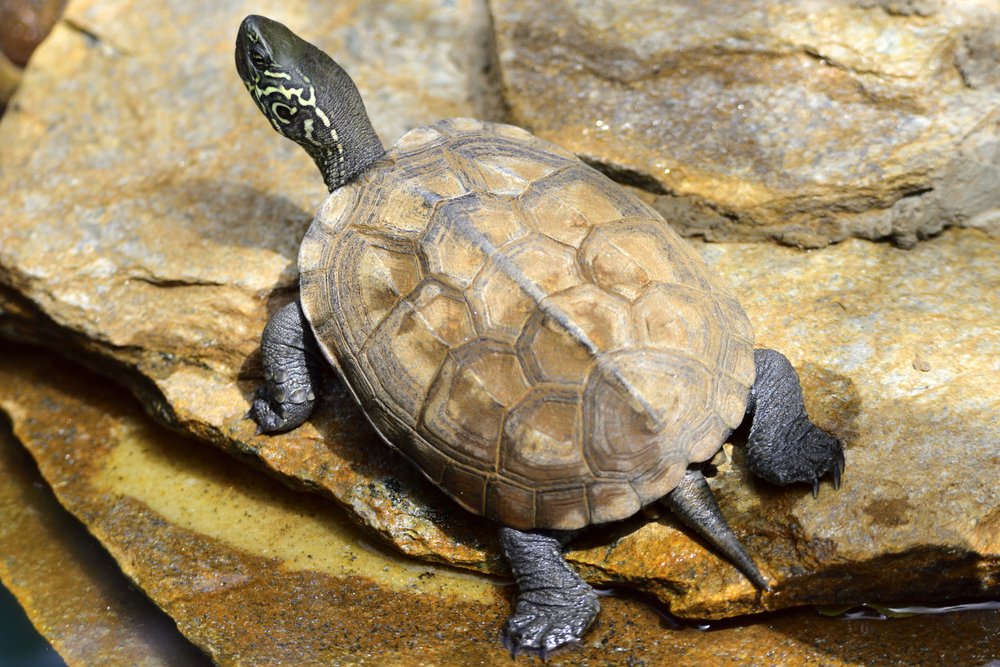 Common Snapping Turtles are found throughout the Americas. There are four main subspecies, each with their own preferences when it comes to habitat.

The Northern Snapping Turtle has the broadest range of all the snapping turtle subspecies. This turtle is found throughout the eastern portion of the United States, reaching as far west as Colorado. Its range stretches as far north as parts of Canada, and as far south as Louisiana.

The Florida Snapping Turtle, on the other hand, is found only in Florida and parts of Georgia.

The Mexican Snapping Turtle is found from central Mexico all the way south through Guatemala and Honduras.

The Ecuadorian Snapping Turtle is found from Honduras through Panama to Columbia and Ecuador.

Put all these subspecies together, and you can see that the Common Snapping Turtle has an impressive geographical range.

The Alligator Snapping Turtle, on the other hand, is much more limited in its range. These turtles are only found in the wild in the southeastern United States, including Southern Georgia, Northern Florida, West/Central Texas and up to the north in Southwest Indiana, Illinois, Kansas and the Mississippi Valley. This is a wider range than the Florida Snapping Turtle, but their ranges do overlap in places. 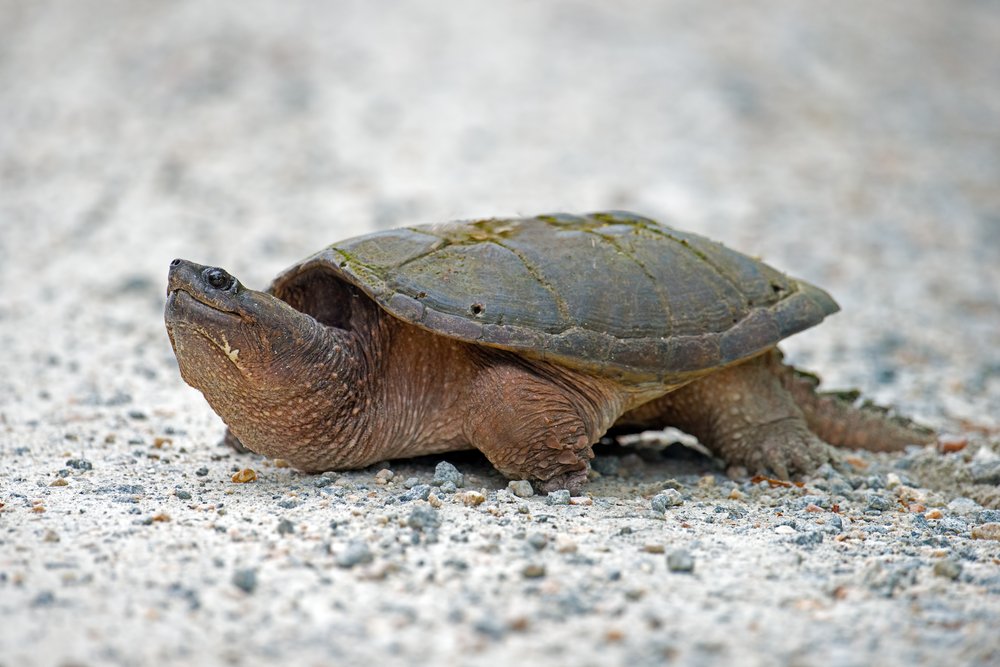 In the wild, Common Snapping Turtles are found in bodies of water such as lakes, rivers, ponds and canals. As a freshwater species, they cannot survive in the ocean. Snapping turtles prefer slow-moving and shallow waters that make it easier for them to catch fish, but they can be found in the shallow coastal areas of large bodies of water such as the Great Lakes. It may not look like it from their heavy-looking bodies, but Common Snapping Turtles are great swimmers. However, they don’t like to expend a lot of energy swimming if they can avoid it. More commonly, they will find somewhere to hide and wait for an opportunity to ambush their prey. Bodies of water with muddy bottoms and lots of vegetation, therefore, suit these animals perfectly. Ideally, these turtles will find some driftwood to give them the perfect hiding spot.

In the Northern parts of their range, snapping turtles hibernate during the harsh winters. They have no problem living under the ice of frozen ponds and rivers while they wait for the spring thaw.

Like their common cousins, Alligator Snapping Turtles are aquatic and prefer to spend virtually their entire lives in the water. Alligator Snapping Turtles are the largest species of turtle in North America, and as such, they lead quite sedentary lives. Like the Common Snapping Turtle, they try to avoid moving any more than is necessary. They, too, prefer still or slow-moving bodies of water where visibility is poor, and where plants or driftwood allow them to hide and give them something to cling to while they wait for their prey to pass by.

Because of their warmer southern range, Alligator Snapping Turtles do not hibernate. They stay active all year round but may move to southern parts of their range to escape the colder weather of winter.

In the wild, Common Snapping Turtles will eat just about anything! Providing they can catch it, that is. Snapping turtles have very wide throats, so they can swallow pretty much anything that fits in their mouths. Which is just as well, because they lack teeth that can chew up their food to make it easier to swallow. What they have instead is a hard beak that works like a set of shears to tear their food into chunks that they can swallow. It’s this biting behavior that gives them the name Snapping Turtle. And if a snapping turtle bits something too big to swallow in one gulp, it will use its strong front legs and sharp beak to tear chunks out of whatever it has caught to allow it to eat it fully.

Young snappers mostly eat smaller prey such as snails, worms, leeches, insects, small fish and water plants. They will also quite happily consume the flesh of larger animals that have died and end up on the bottom of the lake or pond the turtles live in.

Adult snappers need larger prey. They will eat fish, frogs, newts, snakes, other turtles and sometimes water birds if they can catch them. Just like the young turtles, they are not above scavenging behavior, and will readily eat the flesh of animals that have died in the water. And while these turtles eat a lot of meat, they are also willing to eat any plants they come across. In fact, plants make up a third of a snapping turtle’s diet. This broad diet allows the turtles to survive on whatever comes their way in the murky waters they call home. In a way, these turtles function like the swamp’s waste disposal system, consuming dead animals and other decaying organic matter that might otherwise rot and contaminate the water. Not that the turtles do this to be nice, of course. They’re just trying to stay fed.

Both of these types of turtles prefer to hunt at night, using the cover of darkness to ambush fish. However, if they are hungry, they will hunt in the daytime too.

The Alligator Snapping Turtle’s tongue gives it a unique method of hunting that no other snapping turtle uses. The turtle will sometimes sit on the bottom of the lake or swamp that it lives in with its mouth wide open. It will waggle its worm-like tongue, using it as a lure to attract fish. And once an unwitting fish swims in between its jaws, the turtle snaps them shut hard, killing the fish quickly. This method of hunting is more commonly used n=by smaller, younger turtles, but all Alligator Snapping Turtles can use this method of fishing. It has the advantage that it requires very little effort on the part of the turtle, allowing them to conserve energy for other tasks. 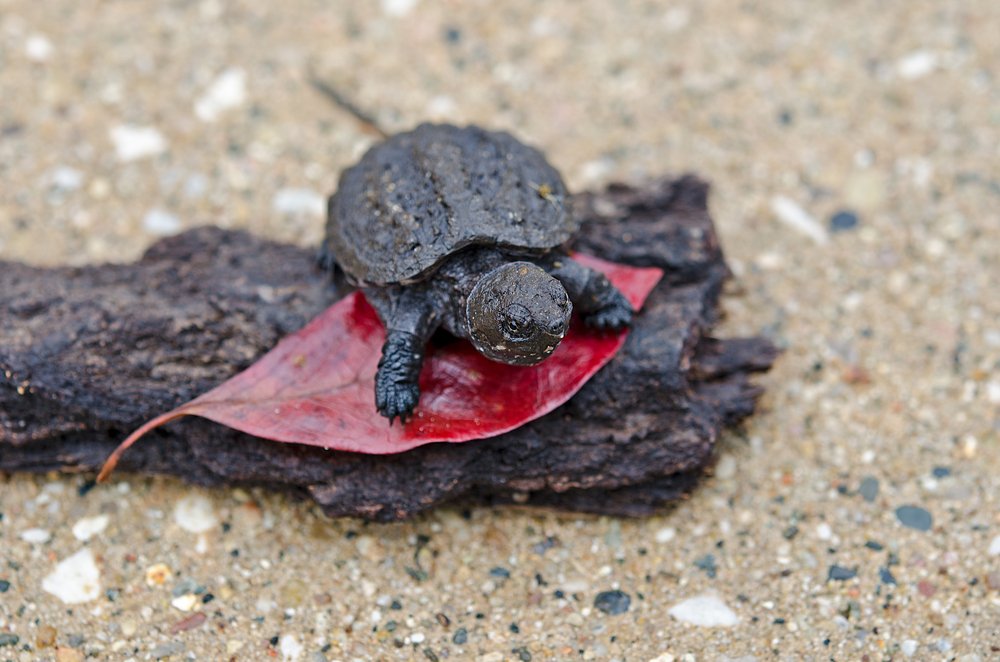 Snapping turtle hatchlings are tiny, no more than an inch long. At this size, they are vulnerable to predation by a large variety of other animals. Crows, mink, skunks, foxes, raccoons, herons, hawks, snakes, dogs – all of these animals will eat a juvenile snapping turtle if they catch one and feel hungry. Also, snapping turtles are not above eating each other if they get the chance. Snapping turtle parents do not care for their young in any way, so the young hatchlings live a very dangerous life while they grow.

Once a snapping turtle is fully grown, however, they have virtually no natural predators. Their hard shell protects them from attack by other animals, and they are quite capable of using their ferocious bite to protect themselves if they need to. Also, the common snapping turtle can produce a vile-smelling chemical from underneath its shell if it wants to be left alone. This is enough to put most predators off from trying to mess with a snapping turtle.

But this doesn’t mean the turtles are totally safe. The biggest threat to snapping turtles is humans. Some people hunt the turtles for meat or else for fun. Also, some fishermen will kill the turtles on sight, since they feel that the turtles represent a threat to the fish stocks in the bodies of water they live in. Then there are all the accidental killings of turtles that can happen, such as when a turtle is injured by the propeller of a boat, or a female is hit by a car on her way to build a nest.

By far the biggest threat to snapping turtles, though, is the loss of habitat. Like all animals, these turtles are evolved to survive in specific conditions, and can’t simply move elsewhere when their habitat is threatened. Increasing human populations put pressure on the rivers and lakes and swamps that these turtles call home. The biggest threat to snapping turtles in the wild is easily our own species.

The Alligator Snapping Turtle was once considered endangered. Thanks to conservation efforts, its numbers have rebounded in recent years. But these turtles are still vulnerable to changes in their habitat and need protection if they are to survive.

In the wild, snapping turtles mate from April to November, and nest from May to October. Turtles reproduce sexually, with the male mounting the female from behind and holding onto her shell with his claws while they mate. Once mated, the female will leave the water for one of the only times in her life to make a nest. She will dig a nest, often quite far from the water to protect the eggs from flooding. Then she will lay her eggs one by one into the hole she has dug. Common Snapping Turtle eggs are spherical and hard-shelled. 25 is a typical number of eggs, but some nests have been found to contain over 80 eggs.

Once the eggs are laid, the female turtle covers them up and returns to the water. She does not take care of her young in any way. After 80-90 days, the eggs will hatch. The sex of the turtles depends on the temperature in the nest where they incubated. Between 24-26 degrees Celsius, almost all the eggs will be male. Warmer or cooler nests produce females.

Once hatched, the tiny turtles will instinctively head towards the nearest water. This is the most vulnerable stage of a turtle’s life. Tiny and soft-shelled, they are easy prey for a great many predators. Their best defense is to reach the water and find somewhere to hide. Then they will eat whatever they can catch and grow into adults. 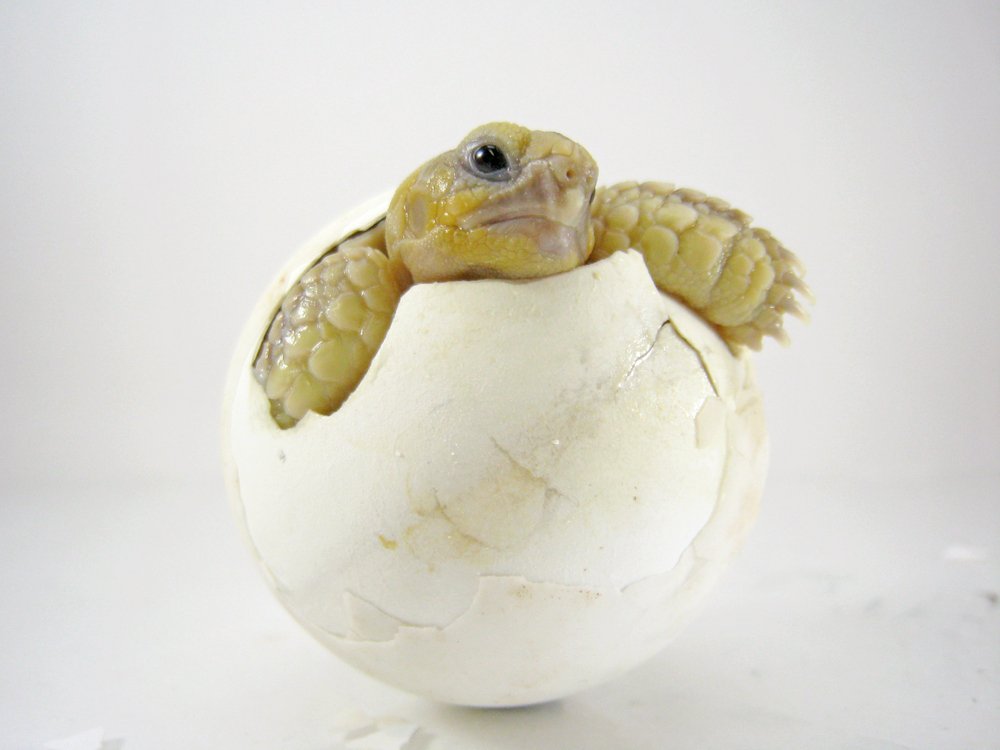