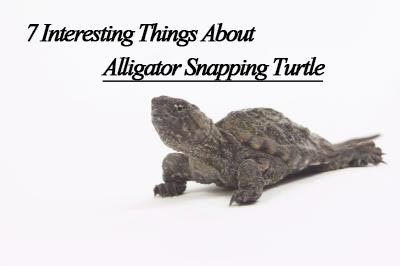 When we think of turtles, we usually think of placid, slow-moving, docile creatures. And for the most part, this is true. Unlike some of their other reptilian cousins such as snakes and crocodiles, most turtles are peaceful vegetarians that pose no threat to humans. 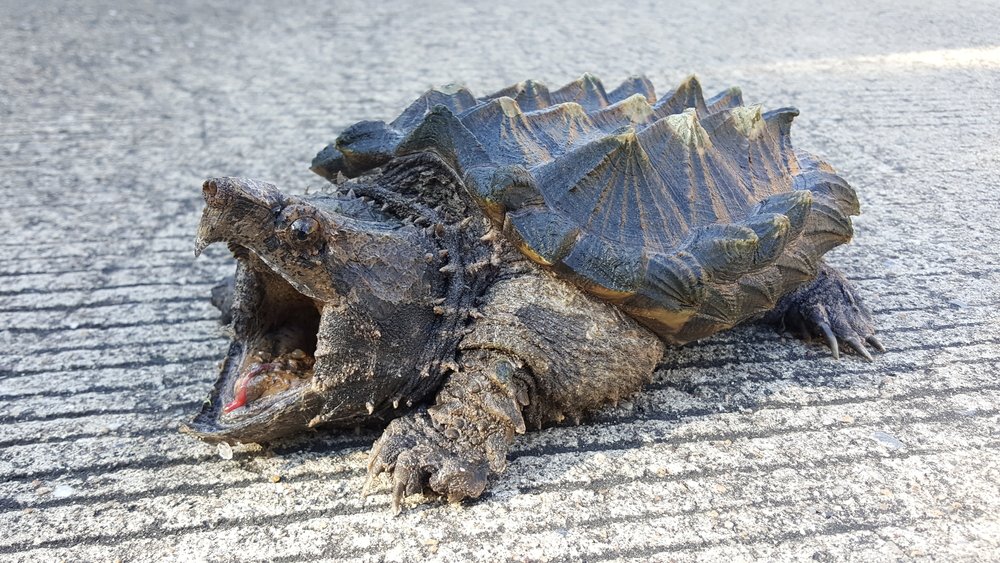 Alligator Snapping Turtles are a species of snapping turtle that lives in freshwater lakes and swamps. They get their name from the fact that their ridged shells resemble the rough skin of an alligator. Well, that and their fearsome bite!

There are many species of snapping turtle, but Alligator Snapping Turtles are the biggest and certainly the meanest looking of them all.

For a long time, it was thought that Alligator Snapping Turtles were a single species only distantly related to other snapping turtles. Recently, though, researchers have determined that the physical differences between populations are great enough to constitute three different species. However, the differences between these species are mostly academic. All of them live in roughly the same geographical area and have similar habits. And if you run into one of these creatures in the wild, the last thing on your mind will be what specific species it is! 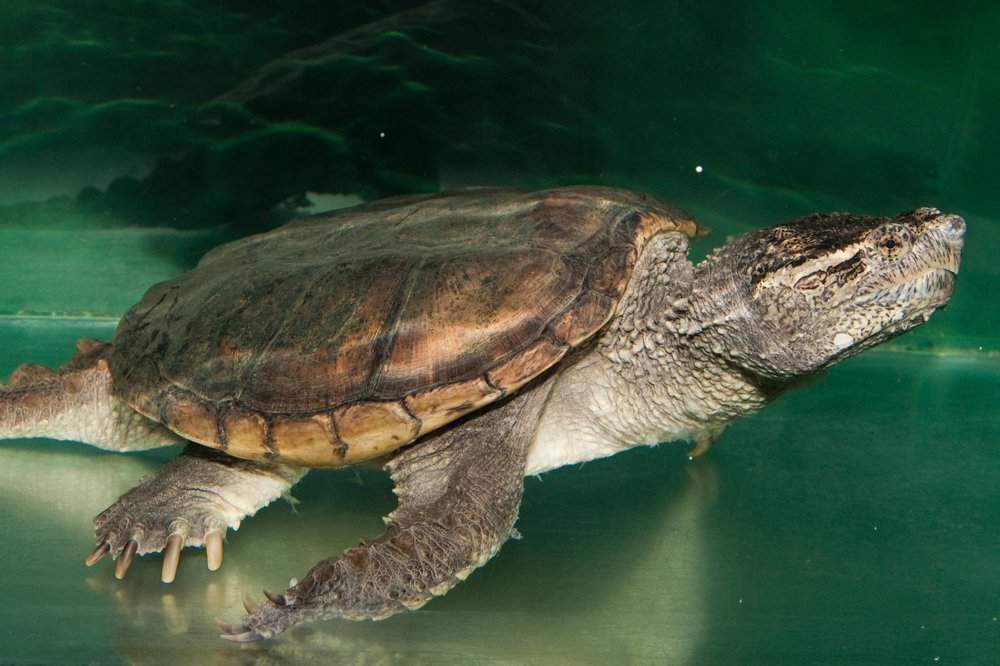 The Alligator Snapping Turtle is one of the heaviest turtles in the world. This species of turtle continues to grow throughout its life, and like many turtles, the Alligator Snapping Turtle can be very long-lived. The largest turtles reported weighed up to 113kg/249lbs! It’s uncommon to find wild specimens of that size, but turtles that weigh 45 kg/100lb are often encountered in the wild. That’s big enough!

The Alligator Snapping Turtle has a large, heavy head. Its shell distinguishes it from other snapping turtles since the Alligator Snapping Turtle has a shell characterized by three ridges of large prominent scales. These scales give it a primitive look, almost like some species of armored dinosaurs. These ridges give it its name, since many people think they resemble the ridged backs of alligators.

Alligator Snapping Turtles are a solid gray, black, brown or olive green in color. Their eyes are surrounded by a pattern of radiating yellow stripes which serve to disguise their eyes. Their eyes are also surrounded by a star-shaped arrangement of fleshy nodes that protect the eye from damage. No other species of snapping turtle has this arrangement of scales around their eye, which look almost like spikes and contribute to the Alligator Snapping Turtle’s armored appearance. If you took a regular snapping turtle and tried to make it look as scary as possible, you’d probably end up with something like the Alligator Snapping Turtle.

Despite their large size, Alligator Snapping Turtles can be surprisingly difficult to spot. They often live in swamps and other sources of still water, and their shells are prone to algae growth which makes them look like rocks sticking out of the water. As a result, many fishermen have learned to take great care in areas where there are Alligator Snapping Turtle populations. 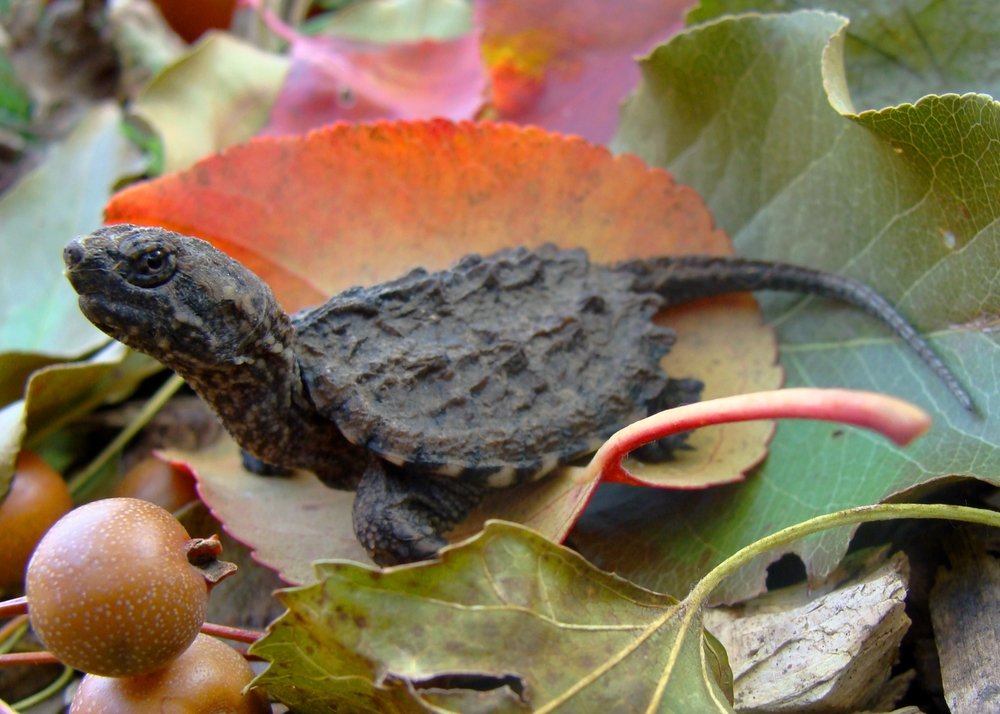 As well as these natural habitats, small numbers of Alligator Snapping Turtles have either been released or have escaped in Germany and the Czech Republic. In the EU, they are considered an invasive species and it is illegal to keep them without special permits. 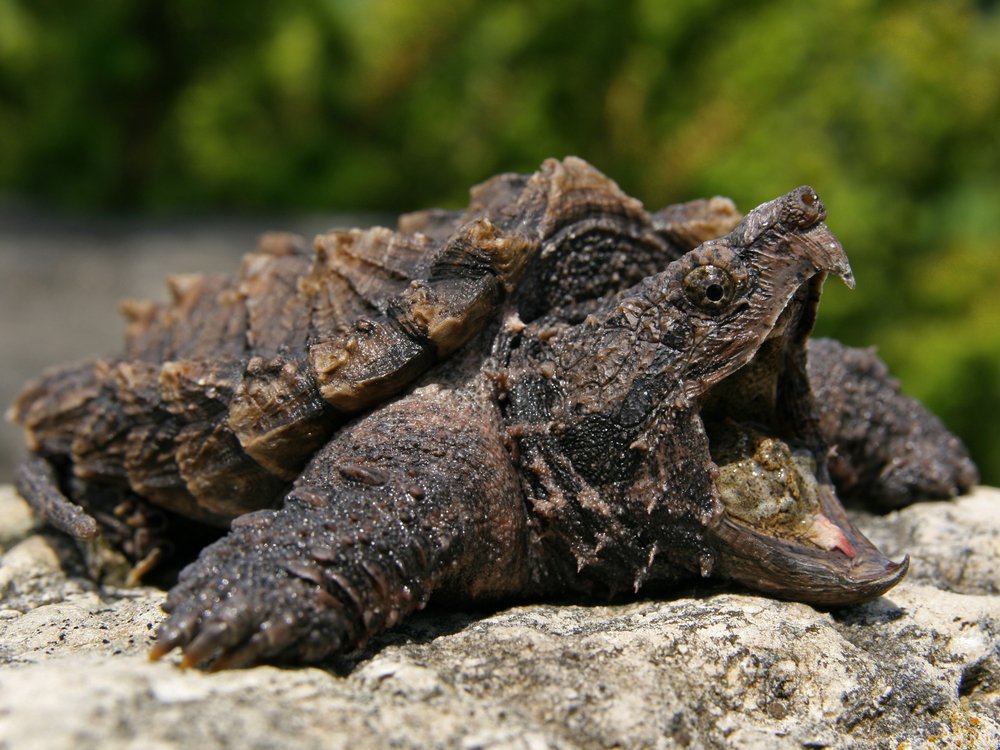 Alligator Snapping Turtles are a freshwater species, which means you won’t find one in the sea. Instead, they live in rivers and lakes. Alligator Snapping Turtles generally spend their time in areas with lots of fish, which are their main source of prey. They also like to stay hidden, and tend to prefer bodies of water which are still and not too deep. Swampland and marshes are perfect for these turtles since they provide them with plenty of fish, good cover for hunting and solid ground for the females to lay their eggs.

Alligator Snapping Turtles most commonly hunt at night. One of their more surprising habits is that they will often sit on the bottom of a lake, pond or riverbed with their jaws open, waiting for prey animals to swim inside. This seemingly lazy tactic is more effective than you might think, thanks to an extraordinary evolutionary quirk of the Alligator Snapping Turtle. The turtle’s tongue is vermiform, which is a fancy way of saying that it looks like a worm. By waggling this tongue back and forth, the turtle can lure fish into its mouth where its quick-moving jaws will make short work of the fish. That’s where the ‘snapping’ part of the Alligator Snapping Turtle’s name comes from.

Alligator Snapping Turtles reach maturity at around 12 years of age. They mate once per year, in the spring. After mating, the female will crawl onto land and dig a hole to lay her eggs in, usually around 50 meters from the water’s edge to prevent the nest from being flooded. She will lay anywhere from 10 to 50 eggs in this nest. Incubation takes around 100 to 140 days, with the hatchlings emerging in the early fall.

The sex of the young turtles is determined by the temperature of the nest they are incubated in. Temperatures above 29-30 degrees Celsius produce eggs with a bias towards females, while cooler nests produce males. It’s not fully understood why this is the case. But this happens with many species of turtle, not just the Alligator Snapping Turtle.

Hatchlings emerge from their eggs from August to October. They use a special tooth to cut through the leathery shell of their egg in order to emerge. Once the young hatch, they instinctively dig their way out of the nest and make their way towards the nearest water. Due to their tiny size and the fact that their shells are soft, baby Alligator Snapping Turtles are vulnerable to many different predators, including birds, fish, raccoons, foxes, dogs, snakes and alligators. They can also be eaten by other Alligator Snapping Turtles. Once the mother turtle has laid her eggs, she provides no care for them and has no further involvement with her young. But once the young turtles have grown and their shells are hardened, they no longer have any natural predators.

Alligator Snapping Turtles use chemosensory cues in the water to detect their prey. This basically means that they detect the natural chemicals in the water that other animals give off. They do this by pumping their throats to draw water in and out to sample it for chemicals – sort of like an underwater version of smelling for prey. This allows them to actively hunt for food as well as passively waiting for fish to swim into their jaws.

Alligator Snapping Turtles hatch on land, but aside from females looking to lay eggs, they prefer to spend all of their time in the water. Unlike other reptiles, they don’t even climb onto land to bask in the sun. Instead, they simply float at the top of the water and absorb the sunlight there. The water helps support their considerable weight and keeps them safe from any danger they might encounter on land.

Because they live in relatively warm climates, Alligator Snapping Turtles are active all year round. They may move to Southern parts of their range as winter cools the water, but they do not hibernate and continue to hunt and feed throughout the year.

In their ecosystem, Alligator Snapping Turtles function almost as a kind of natural garbage disposal. By eating almost anything they come across, they help to clean the water of dead animals and keep it healthier than it would be without them. Instead of asking what Alligator Snapping Turtles eat, it might be easier to ask what they don’t eat. Because there isn’t much that these turtles won’t try to take a bite out of if they get the chance!

Alligator snapping turtles are famous above all for their bite. After all, the clue is right there in the name. And it’s true that these turtles do have a mean bite. In the wild, it’s their main offensive weapon, and they use it to catch prey as well as to defend themselves if necessary.

It’s this that brings them most often into conflict with humans. Lots of people like to fish, and Alligator Snapping Turtles like to live in habitats that have lots of fish. Also, the turtles can be difficult to see. In the dark waters of a swamp, the turtle’s greenish-brown bodies blend perfectly with the color of the water, and the algae that often grows on their shells make them look like a rock or a log. It’s very easy to accidentally step on a turtle or bother it in some other way, and that’s when people get bitten.

It’s not like turtles go out of their way to bite people. In fact, snapping turtles would rather avoid people altogether. After all, they can’t eat us, and there’s nothing else they want from us. But going out on the water brings humans into conflict with turtles. Another area of conflict is when a female turtle climbs onto dry land to lay her eggs. Because these turtles are so unique-looking, it’s very tempting for some people to try to handle or otherwise interact with them.

So how bad is the bite of an Alligator Snapping Turtle?

But there’s more to the damage a bite can cause than just the force a turtle’s jaws exert. The mouth of an Alligator Snapping Turtle is made up of a hard beak that can be razor sharp, designed both for quickly killing prey and defending the turtle from predators where necessary. This beak acts like a pair of hardened shears, greatly enhancing the damage a turtle’s bite causes. The result is that an Alligator Snapping Turtle can quite easily bite off a human finger. Anecdotal accounts of them biting through broom handles have been tested, and appear to be true, although it might take them a couple of tries.

The power of an Alligator Snapping Turtle’s jaws can be seen in the wide variety of the prey that they consume. These turtles are known to eat almost anything they can get between their jaws, including other turtles. Their jaws are quite capable of shearing through scale and shell and muscle and bone to dismember their prey. Remember that before you get too close to one of these river monsters! 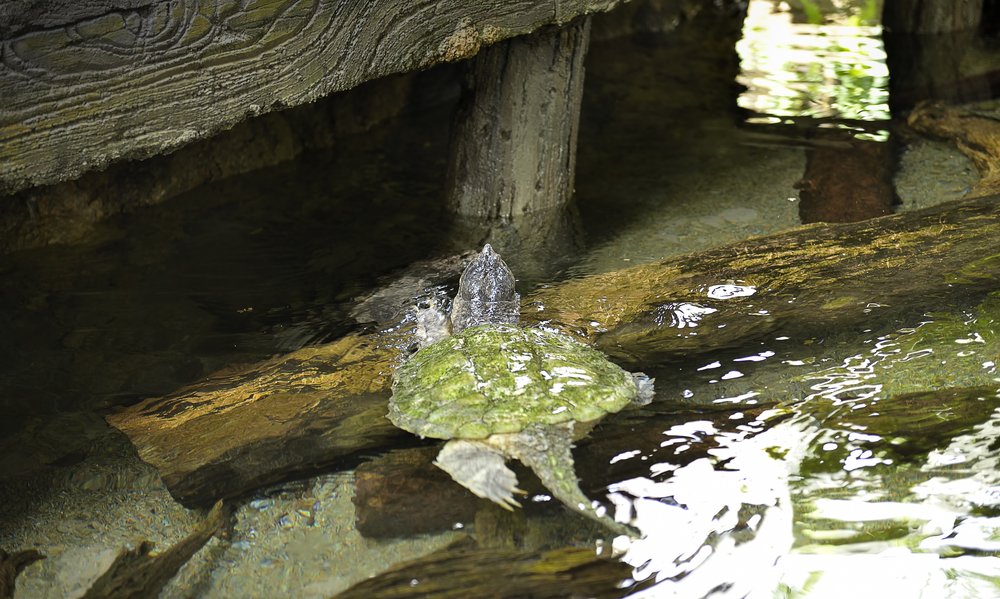 Alligator snapping turtles look fearsome, and in the wild, they have no natural predators. But that doesn’t mean that they’re not vulnerable. In fact, in recent years, their numbers have been in decline across their traditional habitat. This is due to a number of factors, chief among them being a loss of habitat due to human activity. Additionally, Alligator Snapping Turtles are sometimes hunted by humans for food.

Another threat to these turtles is traffic. Alligator Snapping Turtles spend their lives in the water, but the females do come onto land to lay their eggs. Sometimes, they get hit by cars while doing this, and the loss of a breeding female to a population of turtles is especially damaging.

Alligator Snapping Turtles look like creatures from a prehistoric time, and in their natural environment, they can be quite fearsome. But as scary as they look, these animals don’t mean us any harm. They are simply trying to live their lives the way their instincts tell them to. So make sure to treat these unique turtles with respect if you are lucky enough to encounter one in the wild. And stay away from those jaws!