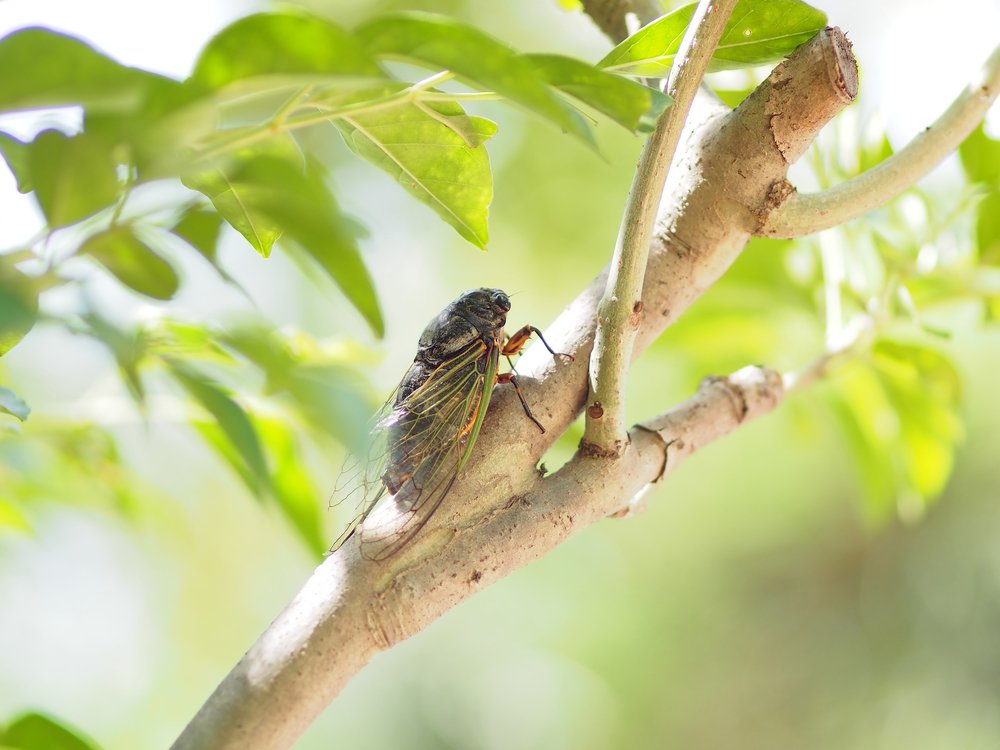 Quiet and sunny summer afternoons are a good time to find shade under a tree in the backyard and read your favourite book or indulge in some soothing music. Then again, if your region is experiencing a Cicada outburst this summer, you better stay in. This is so because the ringing music that fills your surroundings in the summer afternoons in Cicadas’ claim to fame. Cicadas are the “true bugs”, they belong to the genus Cicadoidea. They are large insects which are made conspicuous by the mating calls made by the male members of the species for mating. There are about 1300 species of cicadas and many more which still remain undescribed. They are found in various regions on the planet, every region has a different set of species with varying characteristics.

Cicadas are mostly endemic species, i.e. certain species with certain characteristics are usually found only in one specific region. Out of 1300 described species, around 800 alone are found in Latin America. Tropical areas make a more suited habitat for these insects. There are about 200 identified species of cicadas in Australia and New Zealand, more than 150 species in South Africa, and around 170 described species of the insect in Northern America and Mexico. Even Southeast Asia and Western Pacific have over 200 species of cicadas.

Cicadas are known across the world for having a long life, most of which they spend underground. Some broods of cicadas are famous for spending 13-17 years under the ground. These broods are divided on the basis of the year they were born and headed to the ground. Keeping a track of the broods helps the biologists to forecast that which region is going to face a cicada outburst in the coming summer.

American species are mostly dog-day flies which emerge out of the ground every year in the months of July and August. But most famous amongst the North American species are the Magicicadas, these are periodical cicadas in the true sense because they spend 17 years of their life underground before they come out above the ground for moulting. This species is said to have the longest life amongst all the species present on this planet.

Why are cicadas so noisy? Well, their music might leave your ears ringing for days and make you detest them. Some cicadas can produce sounds of up to and above 100 decibels. They produce these sounds in order to attract the receptive females for reproduction. Read along to see the secrets of the cicada’s sound unveil themselves.

Mating call is a term used to refer to the sounds produced by various males in a species of insects, in order to attract the receptive females for reproduction. Various broods of cicadas produce a different sound to attract females of their own kind.

Some species of cicadas, which are found on the east coast produce shrill music which is as loud as 120 decibels. The sound during the daytime is the loudest and it becomes unbearable to other animals, birds, and people around the region. Summers are indeed a tough time for East Coast dwellers!

The only relief to North Americans living on the east coast with respect to cicadas is that they become inactive as the day falls, letting the people and animals sleep in peace.

How do cicadas produce these sounds? Cicadas, unlike other insects like crickets, do not produce sounds for stridulating. Cicadas have drumstick-like structures called tymbals below each side of their upper abdomen. These tymbals are made up of resilin, they are a part of the exoskeleton. The insects contract and relax their internal muscles, making the tymbals buckle inwards and then go back to their original position. This movement produces clicks. The sound box is nothing else but the hollow abdomen of the male cicada. It helps in accelerating the sound. This continuous motion produces sound, which can leave your ears ringing for days.

Both, the males and the females have tympana, membranous structures to detect sound. These tympana act like ears in these insects. The male cicadas disable their receptors while producing sound to protect their hearing from getting damaged. It is important for the males to disable their own tympana when calling for a mate because some of the broods produce sounds which are as high as 120 dB. It is loud enough to damage human ears if produced in the close vicinity of their ears. Now, here are a few facts which we bet you didn’t know about cicadas’ singing.

Both, male and female cicadas have auditory receptors called Tympana.

Male cicadas disable their sound receptors or tympana when they make the mating call to protect themselves from hearing impairment.

Some broods of cicadas can produce the sound of up to 120 dB, which is loud enough to damage human ears if produced in close vicinity.

It is often difficult for human ears to detect where the cicada songs originate from. This is so because they sing in scattered groups and the pitch of the song is at most constant and continuous, making it difficult for humans to find the insects.

Some smaller species of cicadas produce sounds which are extremely high in pitch, making it inaudible to the human ear.

Certain species of cicadas have a different distress call as well, which they make when they are captured.

Surprisingly, some cicadas also have a courtship and encounter call in order to separate themselves from the chorus.

Every brood has its own mating call so that it attracts the females of their own kind. And not all broods and species of cicadas are loud, some of them just produce vibrations so that their female counterparts can hear them.

These species-specific mating calls can be heard by the females from almost a mile away.

Not just that, to protect themselves from the predators, cicadas modulate the sound and become quieter when they sense a threat.

The cicada music is also said to repel predators such as birds and other rodents.

Now that you know that to whom this ringing music belongs to and why you might be wondering if it is safe to be around these bugs. To give your brain some rest, read along! If your region is going to face a cicada outburst this summer, you better be aware of their behaviour and whether they are safe to be around or not. These creatures are quite forlorn and spend most of their lives under the ground and have no nests to look after, therefore, they are harmless creatures. Cicadas are not equipped with a sting and they are not venomous. They have a straw-like mouth to pierce the trees and suck the xylem sap in.

Then again, they are insects and, hence, are unaware of the urban civilisation. Therefore, if you are using farm or gardening equipment such as drillers or tillers, which vibrate, they are likely to pierce your arm. Yes, cicadas confuse the sound of these equipment as that of fellow cicadas and your arms as a bark or branch of a tree. Though the attack might sting for once, it is harmless. Maximum damage cicadas can cause is to draw a few drops of blood from your body as they are not venomous. To be on a safer side, you should opt to take care of your farms or gardens in summers at dawn or dusk, when cicadas are least active. One concern which is often ignored in their case is that they may also carry germs of deadly diseases. Therefore, it is better to stay put in the summer afternoons or step out with limbs covered.

A major outburst of noisy cicadas in any region can turn out troublesome as they can be loud enough to make animals howl in pain in their ears.

Cicadas can be a threat to farms on the east coast, as they such the xylem fluids from as plant and if there are a major number of cicadas present in a farm, they can lower the quantity and quality of farm produce. Cicadas, through their majestic appearance and symbolic life-cycle, have drawn the attention of various artists, authors, philosophers from across the world. The lives and mating rituals of cicadas are often used by poets and authors in their works.

They have a significant presence in Homer’s Iliad, literary works of Chinese Shang Dynasty, and various other novels such as Natural History by Pliny the Elder, History of Animals by Aristotle, and Romance of the Three Kingdoms by Diaochan.

They have also attracted the gaze of various poets who have written songs inspired by their life cycle. In the composition of Raymundo Perez Soto, La Cigarra (The Cicada), Cicadas are described as lovers who sing until their last breath. On the other hand, Argentinian poet Maria Elena Walsh has used cicadas as a symbol of defiance against death and survival.

The Greek mythology has a story behind the long life-span of cicadas. As depicted in the Homeric Hymn to Aphrodite, Eos, the goddess of the dawn, while seeking a boon of unending life from Zeus for her lover Tithonus, she forgot to ask for him to remain young forever. Now, Tithonus didn’t die but he kept on growing old and gradually he turned into a Cicada, the first cicada.

Who preys upon Cicadas? Cicadas are quite vulnerable creatures to various wasps, rodents, birds, bigger insects and certain species of mammal who prey upon cicadas just because they are available in abundance. One can find millions of cicadas in just a few square miles. Ants love to prey upon the nymphs who have just come out of the eggs. People also like to eat these crunchy insects as a snack in many parts of the world.

With the increasing popularity of usage of cicada shells and wings in accessories, jewellery, and art; people are killing these insects for financial gains. Though it is fine to use the shells because they are not living. It is prohibited under the law in many countries to kill the cicadas for commercial purposes or export the live bugs to other countries. Cicadas have adapted themselves to survive the attacks of predators, over time. They have developed strategies which help them dodge the predators which are difficult to tackle for such tiny bugs. These strategies are:

These insects have mastered the art of camouflage, they can hide on the tree trunks, grass twigs, and roots of the trees easily without getting recognised by cicada wasps, moles, and birds.

The periodical cicadas come out after 13-17 years, both prime numbers. It is difficult for their predators to keep in synch with these numbers and they miss out on the opportunity to attack them.

There are certain predators that cicadas cannot tackle, no matter what they do. Therefore, they have developed the strategy of predator satiation. Cicadas emerge in huge numbers, leaving enough bugs to reproduce and breed even after the predators are satisfied with their catch.

Sometimes, it is easier for cicadas as their preys get repelled by the shrill sound they produce as their mating call. It is also tough for the predators to identify the location from which the sound is originating because they produce these sounds in scattered groups and the pitch of the cicada sound seldom varies.

There you go! If you’ve been through all the information shared above, you are more likely to enjoy the coming cicada outburst by staying indoors in during afternoons and stepping out only when the cicadas are inactive. Not to forget that you can also collect cicada shells from your backyard and other places and use them as ornamental pieces as well. if you yourself are not into insect jewellery, look up cicada shells on eBay and get working to make a few bucks out of something that’s available for free.