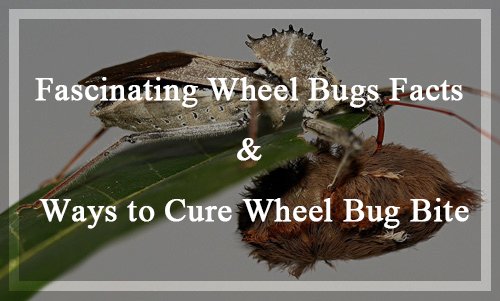 Wheel bugs are also known as Arilus Cristatus are commonly found in different parts of USA and are supposed to be an insect with a crested wheel in their thoracic cavity. Wheel bugs belong to the Reduviidae family and are real bugs that can sting you just like other insects of this family namely water striders, bed bugs, etc. These bugs have a bizarre appearance and seem like a weird robotic bug that makes it look monstrous. They can be thought of as small beasts with skinny head, speedboat shaped abdomen and a cogged wheel at their back.

Information and Identification about wheel bugs

Wheel bugs are the members of the assassin bug family which are known for their painful bites if not handled with care. They have a pair of antennae, or you may call it a fang which they use to prey or for stinging humans when they are disturbed by them. Their ridge-shaped crest or you may call it a wheel is something that gives you all the Information and identification about wheel bugs and gives it its uniqueness which you may use as a factor of distinguishing wheel bugs from other types of bugs. Their size ranges from 28mm to 36mm and is usually found in grey, black, red and brown colours. They have a fuzzy appearance with a back which has spikes which are actually teeth like structure and a wheel that makes it look different from other bugs. These bugs produce a chirping sound by the action of rubbing its rostrum in a backward and forward fashion over the transverse ridges on the prosternum. These bugs have a neck that is very slender, and their eyes are situated at their back. They have red and orange coloured sacs which help to excrete out a pungent smell which is another characteristic of these wheel bugs that may make you realise that you are sure to plot a wheel bug nearby. These wheel bugs are also considered as an essential predator that can help in saving forests and trees from pests. The saliva of these wheel bugs have some toxic and paralytic properties that are able to kill its prey when injected inside the body of the victim. Caterpillars are considered to be as the favourite preys of wheel bugs and serve as a good meal for these monstrous insects. The young ones of these wheel bugs lack the wheel, but as they become an adult, the wheel crest starts developing and they gain its unique identification.

Are wheel bugs dangerous for humans?

The wheel bugs also have a dangerous appearance and may scare you off if you happen to sight them nearby you. If you are thinking Does wheel bug bite on the human, then the answer is “yes.” But these insects will not try to harm you until they are disturbed because they like to stay aloof and away from humans and are not aggressive in nature. But the code of conduct is ‘live and let live.’ So you cannot think of playing up games with a wheel bug expecting nothing in return. Does wheel bug bite on the human is a question that is somewhat dependent on your choice of messing up with these bugs or staying far away from it. So if you don’t want to be stung by a wheel bug, then you have to take proper care that you are not irritating these insects in any aspects. If you happen to do so, then you are sure to get a wheel bug kiss that you will not miss if you make these insects go cross with you and be sure that the kiss is quite painful, unlike all the kisses that you get from your loved ones. If you are stung by a wheel bug, then the cure and treatment also take a long time about a month or two to get the wound completely healed.

What do wheel bugs eat?

Wheel bugs usually prey on different sift bodied insects for their food. If we overlook the wheel bug bite and if you have a beautiful garden, then you can be considered as a lucky person to have these wheel bugs at your place. These wheel bugs are natural predators and can help you to cope up with the pests in your garden, they also feed on the caterpillars and thus you can be a bit at peace of you see wheel bugs intruding into your garden. When a wheel bug happens to spot its prey, then they head towards them in a slow and quiet manner so that its prey is not able to get a hint about the wheel bug being present near them. As soon as they reach close by to their prey, they use their pair of front legs to capture their prey, and then they plunge on their beaks on the body of the prey. Apart from the sting that they give to its prey, the saliva of these wheel bug consists of some sort of paralytic substance which is enough to finish off the prey within a short time span of just thirty seconds by draining of all the body fluid of the prey that it has captured. These wheel bugs have the capability of liquefying their food and can suck up their liquefied meat as a milkshake. Wheel bugs are considered as important predators and can save your trees from being defoliated by other insects and pests but at the same time can take the form of a devil if you accidentally happen to disturb them or their activities. These bugs play an important role in preserving the forests and can help the humans in significant ways if you overlook the wheel bug bite that they can give if you show signs of carelessness in dealing with them. The toxins that are released when a person is stung by a wheel bug and numbness and immense pain are the Results of wheel bug bite caused, though this may not cause death and other health issues. If you happen to scare of these bugs in anyways, then you are inviting trouble for yourself.

What are the symptoms of wheel bug bite?

If you are thinking about What are the symptoms of wheel bug bite, then the person who is stung by a wheel bug feels something funny down their throats. It is some kind of a weird feeling that you may get deep down in the throat and you may feel that your throat is bleeding from the inside. Other symptoms that you may recognize after being stung by a wheel bug is the numbness, swelling, and redness on the affected area.

How to deal with wheel bug bite?

There are few basic precautions that you can take after being bitten by a bug. Plantain leaves are also effective in treating wheel bug bites; you can get a plantain leaf, wash it properly and chew it to get relief from the pain that is caused due to the sting of wheel bugs. Apart from chewing the plantain leaves one can also use it on the affected area by using its paste or even by wrapping up the wound by the plantain leaves. You can also apply some antiseptic cream on the wound and take medicines such as ibuprofen or aspirin to lower down the intensity of the pain. One can mix some Epsom salt in a bowl of water and soak the affected area ion this water to get some relief. One of the best ways on how to deal with wheel bug bite is to opt out for medical assistance.

The fact is wheel bugs are awesome and are a gift of nature to our forests. Having these in your garden means having a pest free and healthy garden. We can consider these wheel bugs to serve you the purpose of organic pesticides which are not going to harm your crops in anyways instead help you in eradicating and riving off the unwanted pests from your garden or farm. These wheel bugs do not eat or harm your plants so that you can stay at peace and keep your calm; they only feed on insects which is a good sign to keep your farm free from pest population. Another good thing is that there are very minimal chances that these bugs can creep into your home, so you are safe from these insects as they prefer to be in their own natural habitat and that is your garden. Yes, we agree that wheel bugs may sting you, but they are indeed harmless until they do not sight any sign of danger. What you need to know about wheel bugs is that they are essential predators for your yard and thus beneficial so we shouldn’t try to bring an end to the lives of these predators instead be cautious enough while dealing with these insects. These bugs are also not found in abundance, but if you still want to get control over these bugs, then you can use the insecticides to keep these dangerous looking creatures away from your place.

As told earlier wheel bugs are harmless until and unless you come in their way and disturb them. So the very first step in order to prevent yourself from a wheel bug bite is to handle these insects with care and stay away from the vicinities that are surrounded by such bugs. Secondly, if you are having a stroll in your garden then make sure that you are wearing clothes that can cover your body well with long sleeves. If by chance if you happen to find a wheel bug landing on you then shove off the insect gently and brush it off to prevent yourself from a wheel bug bite. In the worst case if you happen to be bitten by a wheel bug then make sure that you first cleanse the area with water and soap and further you can seek medical assistance. You can also opt for first aid at the very first step when you are bitten by these bugs and apply antiseptic lotions or take pain relief medicines that can help you in getting relief from the sting. Wheel bugs do not enter your home in normal practice and prefer to enjoy themselves with their counterparts in your yards and garden. But if you want to take precautions to avoid the slightest of a chance of a wheel bug entering your home, then you can cover all your doors and windows with mesh screens. Mesh screens are not only useful for keeping these wheel bugs away from your home but also helps you in keeping other insects from becoming unwanted guests at your residence. Also, ensure that there are no cracks and opening in your home which may serve as an entrance gate for these insects. By chance, if you happen to find a whole lot of population infesting your garden or entering your home and you cannot take control over it, then you can call for a pest control company to help you in this errand.