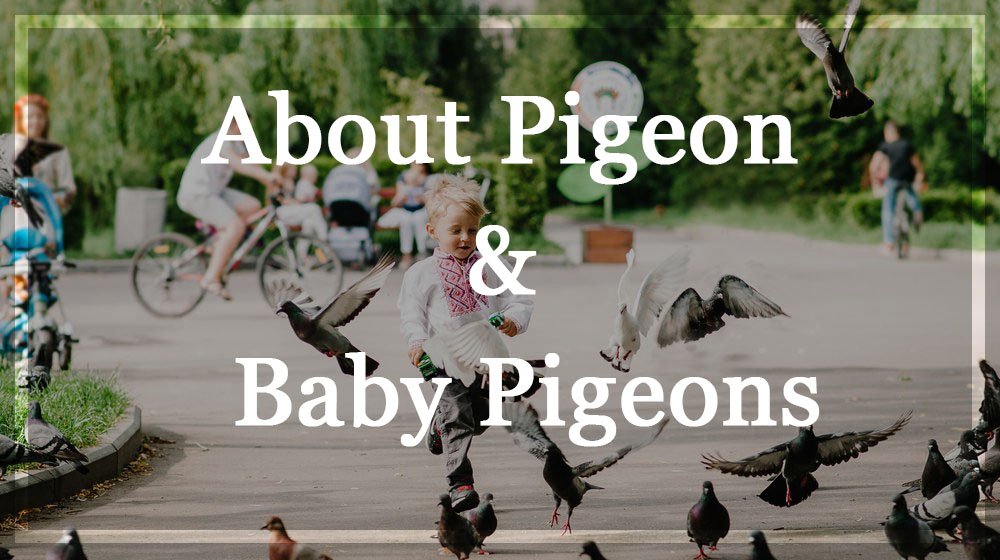 There are over 200 different varieties and breeds of pigeon. They are distinguished by their body size and shape which determines, patterns and feather color. They are classified into three classes;

Mating habits of pigeon: how baby pigeon comes into the picture Usually, pigeon mates for life and breed up to 8 times a year with optimum conditions. Each time about two pigeon are brought into the world. Abundance of food also dictates the frequency of breeding. For pigeon to hatch, it takes about 19 days where both parents are involved in incubating the eggs. The young one of pigeon are known as ‘squabs’.  The squabs are fed by both parents with what is termed special pigeon milk that is made up regurgitation. In a day after its birth, the squab doubles its weight and it takes about 3 days before its heart start beating. More also, it takes 4 days for its eyes to open.

Hungry baby pigeon squeaks at the same time flaps their wings and for this reason, they are known as ‘squeakers’. At the age of two months, the baby pigeon are ready to fledge and they leave their nests. The time they spend on their nests ensures that the life expectancy of baby pigeon is greater than that of other birds. Pigeons live in pair and go through the process of courting, mating, builds a nest together and hatch their young one. They live their entire life together and only leave each other while forcefully separated. Upon separation by force or death, the bird looks for another mate.  In instance where two females lacks mates, they pair up and lay infertile eggs.

The breeding habit of the pigeon is also unique. The male is the one who selects a female mate, coos and struts around her. After the female is attracted by the male pigeon, she becomes friendly. The two mates then selects nesting place where they build a nest. After some time, the female pigeon will lay an egg and another one the next day and incubate it together with the male pigeon. Baby pigeon faces a lot of risks since they are not able to fly and entirely relies on their parents for food and safety. However, consideration the size of the parents, they may not offer the protection needed hence cannot fight with any predators. Some of the predators include snakes and other birds such as hawks. A species that is known to largely feed on the baby pigeon is falcon, Merlin. Its scientific name is Falco columbarius and it usually middle sized. They are usually found in forests and therefore not common in cities. These are a real threat to the survival of juvenile pigeon especially because they cannot fly away. It usually catch and carry the pigeon to the nest where they feed on them.

Baby pigeon are sometimes termed to be nuisance especially those that are not domesticated and hence unwanted. A good number of pigeon have invaded cities where they creates artificial breeding grounds in the buildings that looks similar to their tree homes. Furthermore, they are attracted to warmer conditions and therefore set their homes in the buildings. Pigeons breeds about 8 times in a year and this means that there are huge number of baby pigeon population every time. Baby pigeon have been known to spread diseases This breed of pigeon produces around 10 baby pigeon each year. These pigeon are homing and never willingly leave their nests. More also, these birds are non-migratory and therefore, they are born, live and die at same place. One factor that contributes to spread of bird flu is the dropping from the baby pigeon. Annually, each pigeon will produce up to 11 kilograms droppings. These present a safety and health issue to people residing in the building or the employees who will have to remove them. This risk is even higher when the droppings are build up inside the building. Baby pigeon are known to be carriers of serious human diseases.

Build-up of fecal matter of the baby pigeon also makes ledges and walkways hazardous as they become slippery and unsafe for walking on. These also hinders maintenance routines. Pigeon also roots on external unit of air-conditioners and this increases possibility of contamination. It is not only expensive to remove but also time consuming. Specialized work procedure and protective clothing is also needed. This species of pigeon droppings are known to carry over 40 diseases especially when they are dry. Some of these diseases include Ornithosis, Histoplasmosis, Cryptococcosis and Salmonellosis. The decaying and accumulative bird droppings also cause offensive odours and this attracts flies which carries other diseases. Therefore, the presence of the baby pigeon is not welcomed and this is why there is need to control them.

With Indian Mynas, lice are inherent and as the bird’s roosts overhead, it pose a risk of infecting anyone working or walking below. The droppings are also corrosive to concrete and metal. The losses that results from infestation of baby pigeon leads to losses due to damage to the equipment and cost to cover up cleaning expenses. This species of pigeon is found in many parts of the world. However, they are native to most part of Asia and Europe. These are highly associated to human habitation. His is due to their early adaptation to living with humans. However, the pigeon hosts a lot of parasites and disease hence not desirable to live with. One of the recorded pathogen of the House Sparrow is Escherichia coli and Salmonella.

It also hosts avian malaria and avian pox. Most of these diseases that are hosted by the House Sparrow are also present in human beings and domestic animals and House Sparrow acts as a reservoir host. More also, it hosts Arboviruses such as West Nile virus that commonly affects mammals and insects.

Baby pigeon are considered as pests also as they consume agricultural produce. At the point when they are leaving the nests, their body weight is usually higher than that of their parents. In fact, they are a heavy feeder at this point and this means that if they are located near an agricultural farm, they will cause massive destruction. They also spreads diseases through the produce for instance through their droppings on fresh fruits and vegetables. They are more of a nuisance on farms where organic farming is being practiced due to the fact that pesticides will not be applied. To control the huge population of these pigeon also require more resources and it is also time consuming. It may also not be possible to completely control them and this leads to loss of economic value of the crops. There have increased demand for pets with people going further to take in various animals and birds as pets. Pigeon have not been left out and there is increasing number of people who are having them as pets. Species such as Tumblers, Kings, Fantails and Homers have been termed as beautiful, smart and gentle birds. These have been selectively bred and tamed to enable them survive as pets. Unlike wild pigeon, these domestic baby pigeon are more docile and constantly being vaccinated against diseases.

Baby pigeon makes great indoor pets and only require their house to be modified to make them comfortable.  To achieve this, you will need a big home base that have a double flight cage and a good size. These will allow the baby pigeon space to walk around and also fly when the time comes. Daily out of cage time is also necessary and this allows them to stretch their wings and legs and have fun. Usually, pigeon are easy going and smart birds that learn fast about the household routine. The reason why many people consider having baby pigeon as pests is because they can be taught the routine early enough. This is unlike, older pigeon that are already accustomed to a particular way of living. Baby pigeon do well as pets and are even unafraid of cats and dogs when they are in the cage. Pigeon are one of the bird that have been termed as being intelligent, but, is this true. Well, it is true, pigeon are intelligent creatures and this is also even seen in the baby pigeon. At baby pigeon grows some feathers, they start flapping them even when they are on their nests.  However, they do not attempt to fly away until the instinct tells them that it is the time. Pigeon have also taken roles that were initially thought to be preserve to primates and humans. For instance, pigeon have been found to pass mirror test as it recognizes its reflection on the mirror. It is the only non-mammal ad one of six species that have this ability.

Baby pigeon also are able to recognize the 26 letter of English and conceptualize them. Additionally, they differentiate between photographs and different human being in a photograph.

Another distinguishing attribute of baby pigeon is the fact that they are really cautious. This is seen as they hide at the safest spot in the nest they cannot be easily spotted by predators. Parents of these pigeon also builds the nest at the highest point and out of view. For instance, they are built on high-rises, bridges and rooftops. They can be living by human beings and not be easily disturbed. This makes the process of controlling the pigeon hard especially due to accessibility. More also, the only thing that will make humans to know of their presence is the squeaking sound from the baby pigeons and droppings. Infestation of pigeon results to what is known as human wildlife conflicts in instances that they are not welcomed. This means that they are not pets but move in and starts building their nests and hatching the young ones. Baby pigeon are not desirable especially due to noise pollution and their droppings. Many people are scared on the risk of infections that are associated with baby pigeon. Unlike the adults who move out during daylight to look for food, baby pigeons are left and when they get hungry, they start squeaking.

The higher number of the baby pigeon due to high birth rate of the pigeon results to accumulation of wastes that create economic, public safety and aesthetic concern. The dropping have uric acid that damage building and other equipment.

Use  of  Screens  and  Netting