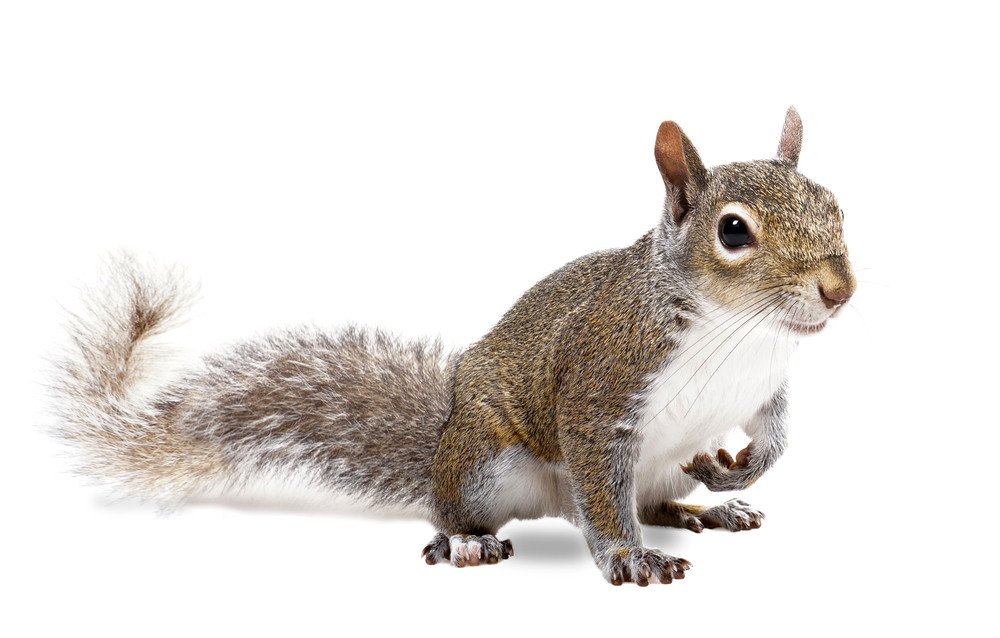 Over 200 species of squirrel can be found living across the globe. The Gray squirrel is a type of mammal which is highly recognizable in various parts of Great Britain. However, it is nonlocal. It was originally introduced in 1876, from the eastern USA and at the time happened to be a major source of food for the natives. Sciurus carolinensis is the scientific name given to them. Eastern gray squirrel can always be seen scurrying along in parks, in backyards, or even in the woods of eastern United States. They rummage around for nuts, seeds, buds, and blossoms of trees. Like any other species of squirrels, the gray squirrel plays a crucial role in the process of dispersion. Nevertheless, it is a continuous threat for the UK’s local red squirrel and is responsible for the diminution in the population of red squirrels.

13 questions that you may have about gray squirrels

1. How is their appearance?

Gray squirrels are predominantly covered with fur all over their bodies. As the name suggests, the fur is gray over the top of their bodies and is white or light gray on lower parts or their bellies. Sometimes the squirrels’ skin may even have brownish color as well. There are also eastern squirrels which have red fur and are named as reddish fox squirrels. Melanistic variants, which are the subgroup of eastern gray squirrels are black in color, and albinistic variations create white squirrels.

Grown-up squirrels are 18-20 inches long, and their weight can be up to 1-3 pounds. Grey squirrels have short front legs, but their most distinctive physical characteristic is their bushy tail, which they often use as a handy tool for balance. They can also use it as an umbrella, a sun shade or as a blanket. The squirrels have ever-growing four front teeth that they wear out by always chewing on wood and different materials in their condition.

The gray squirrels are quite bigger than the red squirrel species and do not have white eye rings around their eyes. The dominant part of gray squirrels have chestnut markings on their paws, hips, and confronts, which can sometimes prompt misidentification.

2. Where are they mostly found?

Eastern gray squirrels are natives to Eastern and Midwestern parts of the United States. They are also found in the Mississippi lower region and north into Canada. They have been brought into some areas of the Western United States and a few territories of Canada where they had not been found before. In places like Italy, Scotland, England, and Ireland, they have also been introduced, but unfortunately, in these areas, they are viewed as a pest. Eastern gray squirrels have been a threat for the native European red squirrels as they compete with them. Red squirrels remain in danger as the result of this competition.

3. What are their habitat preferences?

These squirrels incline towards territories of developed areas and blended woodland. They lean towards having a consistent woodland shade so they can scrounge and travel mostly in the trees, instead of landing on the ground where they are easy targets for bigger predators. They are better shielded if they remain the trees.

Trees that produce food that lasts through winter storage are occupied mostly by the gray squirrels. Oaks, walnuts, and pines are all examples of the trees where the population of the gray squirrels is exceptionally high.

Eastern gray squirrels likewise utilize trees for their homes or nests. They construct leaf homes in the higher branches of substantial trees. They also use the holes in the trees as their nest where they can raise their young. Using these holes as a shelter is also helpful against extreme weather conditions.

4. What are their breeding habits?

At the point when a female is nearing her time of fertility, a gathering of up to 10 males will start pursuing her. Usually, the most prevailing of the males will have the privilege to mate with her after a short time of engagement. Females can also mate with more than one male. The gray squirrels breed twice annually, normally amidst summer and again close to the finish of winter. The gestation period lasts for 44 days after a successful mating. There can be up to 9 babies at one time, but normally there are four. The infants are born without fur and are blind. The new-born is only one inch in length and has the weight of only one ounce.

5. What is the life expectancy of gray squirrels?

The life span of gray squirrels can be up to 20 years in captivity, however, in the wild, they live substantially shorter lives because of predation and the difficulties of their natural surroundings.

6. What are their behaviors?

During the day time, gray squirrels are more energetic and active than by night making them diurnal. Peak hours for their activity are 2 or 4 hours before the sunset in winters. Gray squirrels remain alerted at all times and work consistently throughout the year. They keep on storing food for themselves so that they can feed themselves in any season. They are effortlessly equipped for arranging trees, vines, and bushes. Gray squirrels have got four incisor teeth, which develop continually, and are always honed by biting barks, plastic and other objects that are accessible to them. Gray squirrels do not require hibernation; hence they do not rest by any means.

7. How do they interact with each other?

The sense of smell of Eastern gray squirrels is exceptional. They can determine many things through their sense of smell such as levels of stress or even reproductive conditions! This sense also helps them to find hidden food. Other means of communication are movements of their body and sounds like barks and whistles. They also convey their messages through their tail. At a point when predators, for example, red foxes and red-tailed Falcons are somewhere nearby, the Eastern gray squirrel will sound cautioning calls to alarm other squirrels of its kind in the nearby vicinity.

8. What are their eating habits?

Nuts, seeds, flowers, berries, various type of fungi and buds of several trees are the main foods of gray squirrels. The type of trees they feed on are the dogwood, maple, mulberry, and elm. The seeds include cedar, spruce, and pine. Their winter specialty is crops such as wheat and corn. They also eat insects which are important for the young squirrels for their nourishment. Their food provides some moisture, but they also need to drink water which they get from ponds and rainwater collected in the trees.

Eastern gray squirrels are also popular for scatter hoarding where they store food for the later period and also hide their food from other animals. Scatter hoarders grip the tree bark, far above from the ground where they bury their food all across the forest.

9. What are their predators and how do they escape?

Predators include humans, gray wolves, bobcats, red-tailed hawks, snakes, owls and various others. These squirrels are also preyed on by reddish fox squirrels. They are highly active, and their sharp claws help them climb trees easily. This also makes them able to get away from their predators easily. They receive and give warning signals to neighboring squirrels if there’s any predator in close proximity. Their outrageous nimbleness in the trees makes them hard to catch.

10. How do they affect the ecosystem?

Eastern gray squirrels are important living creatures residing in dense forest ecosystems. They eat plenty of seeds. Their seed-reserving habits play a significant role in reforestation. They disperse seeds in hundreds of locations through their process of scatter hoarding. Gray squirrels additionally go after different creatures in the biological community where they live. They prey various parasites, for example, ticks, insects, lice, and roundworms.

11. Do they create problems?

The biggest issue caused by gray squirrels is their ability to adopt residence in your dwelling. They can cause destruction to a native’s property. Gray squirrels make their nests in buildings which can be a danger for woodworks and wirings inside a building. They can chew the electrical lines and are thus, considered as household pests.

They can ruin gardens and fruit trees in your area, and it is very difficult to capture them due to their agility and jumping skills.

12. What is the primary interaction between the gray squirrel and us?

Native Americans and colonists used to have Eastern gray squirrels as their meal and people are still fond of eating squirrel meat. Their economic significance cannot be ignored in some states, such as the Mississippi. About 2.5 million are picked up every year which has an impact of almost 12 million dollars on its economy. People also use squirrel fur for clothing. Moreover, squirrels are hunted by individuals for causing damage to their houses and some people also do it as a leisurely sport.

13. Are they threatened or in danger?

These species are not endangered or threatened. In fact, they are a risk for the native red squirrels. Although they are not at risk but sometimes they cause road accidents and even get killed.

Grey squirrels are gaining popularity as a meal. It used to be the primary source of food for the natives of North America. They are also the main target for hunting. People enjoy the taste of squirrel meat in a variety of different ways. It is enriched with proteins even more than chicken or beef and also happens to be a low-fat meat. Native Americans take advantage of squirrel population in their area and utilize them as a source of food.

Squirrels are usually viewed as wildlife creatures, but because of their nearness in urbanized territories, they do not fear contact with people. It gets really hard to get rid of them once they take up their residence in your place. They consider the place as their own and start making nests in there. Squirrels cause damage to the woodwork in your house. They have got continually growing teeth and that they use these to gnaw at electrical wires, cables, and insulation which may lead to short-circuiting. Squirrels also dig small holes in the yard and make an annoying noise. They also leave marks of their paws on the walls.

Grey squirrels can also completely damage the small plants in your garden or even trees. They have been creating various problems for the natives who have to deal with them. Getting rid of them is really a challenging task. It is tough to control them, however; we can at least try to reduce the damages. Following steps can be taken to control the destruction caused by squirrels;