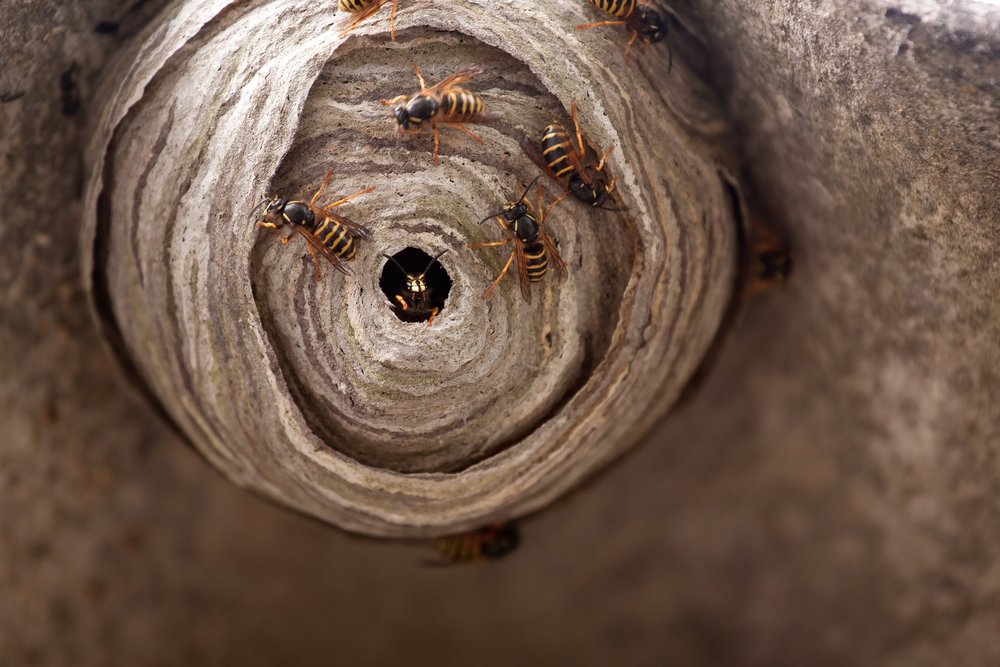 Bee nests are fascinating structures, and the hexagonal lattice has inspired much human architecture and technology. In fact, many people find them so interesting that it’s even possible to purchase and install bee hives in your home, so you can observe the bees in action and harvest your own honey. However, it may not be so easy to view a bee’s nest with scientific curiosity when you find one unexpectedly on your house or property.

There are several different kinds of bee nests, but here are the most common that you are likely to encounter in North America and Europe.

Honeybees create wax with special glands on their bodies, and use it to build the distinctive honeycomb-shaped lattice that is so familiar. The hexagonal cells of the honeycomb are used to store pollen and honey, and also to raise young bees. Bees prefer to have their nests at an optimal temperature, so in colder climates they will build a nest inside a shelter, like the hollow of a tree. In warmer climates, they may build their nests out in the open. A typical nest can contain 50,000 or more bees, and they will occupy a nest for several years.

Bumblebees nest underground, preferring cool, dry shelter, and often move into old rodent nests and burrows. Like honeybees, bumblebees make wax cells to raise their young, but they aren’t organized into a tidy lattice structure; they are grouped more haphazardly. Bumblebees feed the young within their cells until they are old enough to emerge. Most bumblebee colonies hold between 50-400 bees, and the colony only lasts a single season.

Similar to honeybees, wasps also create honeycomb-shaped cells, but instead of making their nests out of wax, they make them out of plant fibers and sometimes mud. For that reason, their nests can look papery and fragile. Some wasp species hang their nests in a sheltered spot, and some build them underground. A wasp nest normally has a few hundred wasps, although large nests can contain several thousand. In climates with cold winters, the next will die over the winter and new queens will start new nests elsewhere. In years or climates with mild winters, the nest will survive into the following year.

Many species of bee are solitary bees and do not build nests at all. Instead, they find a sheltered spot in which to lay their eggs, and create the cell, nourish their young, and live on their own. Many species of bees live without nesting.

Difference Between a Nest and a Hive

If you find an unwanted natural hive in your home or on your property, it’s important to remain calm and be cautious. Even calm and docile bees can become agitated and aggressive in defense of their nest, and it’s important to protect yourself from potential danger. Your next steps depend on what kind of nest it is. If you find a honeybee nest, or are simply finding a lot of honey bees in your house, the best thing to do is to attempt to relocate it rather than kill the bees. Honeybees are an endangered species, of value to the environment and agriculture, as well as producing valuable honey.

In many communities, you can find a professional who will come to your house and relocate a bee hive for you. This is by far the safest and most effective way to get rid of the bees without hurting them, and with no risk to yourself or your family.

— Relocating a honeybee hive yourself

If you have a free hanging natural hive, and can see the queen cell, and aren’t allergic to bee stings, you could attempt to move the hive yourself. Here is how to do it:

It is not recommended that you try to relocate a hive on your own if the hive is inside a structure (like a wall, chimney, or dead tree) that may conceal the queen. The process of trying to open the hive to find her is dangerous, and may do more harm than good. And obviously, it should never be attempted if anyone present is at risk of an allergic reaction to a bee sting.

If you can’t find anyone to relocate the hive, and if the hive is inside the walls or structures of your home, it is best to call a professional exterminator. Although you could spray pesticides into the nest on your own, you risk angering the bees and making them aggressive. Furthermore, even if you are successful in killing the nest, the honey and dead larvae inside the nest may attract other pests and predators and cause new problems. If you find a bumblebee nest, it is better for you, the bees, and the environment to simply leave it alone. Do not lean over the nest and breathe on it, because your breath may provoke the bees to attack. Bumblebees are peaceful, their nests are small, and they will abandon it in the autumn anyway. If you have severe allergies, or if the nest is in an area that receives a lot of foot traffic from people or pets, you may be tempted to relocate the nest instead.

A few professionals might be willing to help relocate a bumblebee nest, but they are rare. It is inadvisable for anyone to attempt it, because it is nearly impossible to do without destroying the nest and being attacked by the bees. However, it is possible to relocate the entrance to a bumblebee nest, to redirect their flight path into a more desirable direction.

Note that many professionals will refuse to exterminate a bumblebee nest because they are beneficial insects. However, if you simply must exterminate the nest, it is not necessary to use pesticides or chemicals. Wearing protective clothing, you can simply pour boiling water down into the nest until the bees have either abandoned it or died. Although there are many species of wasps, they are all more dangerous than bees for several reasons:

It is usually only safe and possible to relocate a wasp nest once all the wasps are killed. After the nest is empty, it can be moved if you prefer. However, because wasps are territorial, the visual presence of a nest can deter new wasps from moving in. Some people even purchase fake wasp nests for that very purpose.

Due to the danger involved, it is strongly recommended to hire a professional to exterminate a wasp nest. They will not only have the most effective pesticides, but will have the proper professional gear and knowledge to do so with minimal risk.

— Exterminating a wasp nest yourself

It is not recommended to attempt to exterminate a wasp nest yourself, but if you have no alternatives, this is the best and safest way to do it: Solitary bees are harmless and beneficial. In most cases, these cells are left unguarded, so they pose no risks to people or pets and should be left alone. Many people actually purchase bee hotels and mason bee homes in order to attract beneficial solitary bees.

For the most part, bees are our friends and play a critical role in our ecosystems. If possible, seek ways to preserve and protect them, while protecting yourself and your family. When in doubt about what kind of bees they are, or what the best way to manage them is, most communities have beekeepers who will advise you, and it is better to call them before you call an exterminator.