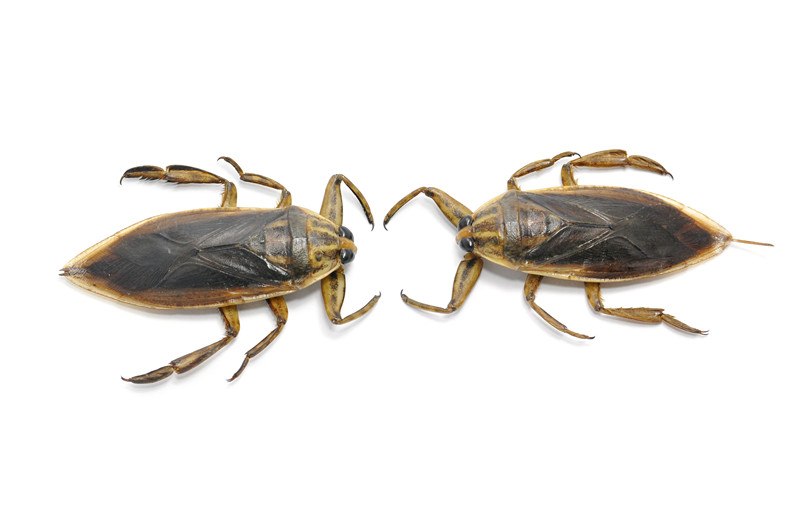 Water bug, as the name suggests, is a water-loving insect that is found all over the world in lakes, ponds, slow streams and other watery places having aquatic plants. Some of its species reside in rapidly flowing water. Insects like cockroaches and beetles are also, sometimes, named as water bugs. There are more than a thousand species of these insects, and water bug family is typically from the order Hemptera. The term ‘true water bugs’ is used for these insects due to their aquatic behaviors. They are also named after their other behaviors, for instance, they can give a painful bite in a certain situation and called as toe biter, and they are also known as light bugs as they love being in the night lights near their homes.

The size, depending on the species, varies from 1/2 to 4 inches. The body is dark and gives the looks of a small boat. The body shape helps them to swim on their back. Their jointed, sharp, and sucking beak is positioned underneath their head, and their lower parts include two short legs on the front, used to gather food and four long legs on the back for forwarding motion. Air bubbles in the body help them to breathe underwater. They have also got wings that they use to fly at night under the artificial lights. Water bugs are differentiated by the shape of their front legs.

Habitat preference also depends on the species. Some like to be in the slow moving water, and you will also found the type that like rapidly flowing water. Most of them prefer to live in the water enriched with aquatic vegetation where they can cling and wait for the prey. They are mostly seen in freshwater, lakes, ponds, and quiet streams. People often take these bugs as water boatmen insects but water bugs can bite, and it is quite painful. They come out of the water to enjoy the artificial lights at night.

They use their powerful front legs to attack other small insects, small fish, tadpoles and even frog. It is surprising that they can attack the animals double their size, but they use their tube-shaped piercing mouth parts and the saliva to suck and slowly nibble the prey. 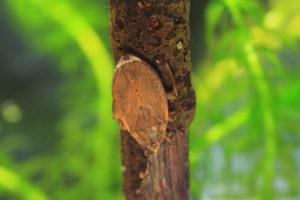 Water bugs undertake a gradual metamorphosis. The life cycle includes three stages, egg, nymph and adults. The warm season is suitable for them to reproduce. After hatching from the egg attached to the underwater plants into a nymph, the next step is molting to reach the adult stage. They get the wings after the last molt, and it requires six weeks to reach the adult stage.

5. The Danger of Bites

They are popular for giving a painful bite. They bite humans if they feel any danger from them as the female is quite aggressive about the protection of her eggs. Their bite can cause swelling to the bitten area. Some of the species do not bite at all.

The basic order of water bugs is Hemptera that is further classified into a large number of groups, and every group contains more than a thousand species. For instance, water boatmen, backswimmers, water scorpions, water strider, and giant water bugs are all different species belong to different families but the same order.

There is a large number of water bug families in the same order. There are nearly countless species of water bugs if all are gathered at one place, but all of them are not common. Some are rare and almost difficult to find. There are some commonly seen around and known by people.

The member of ‘Belostomatidae.’  This is considered as one of the largest insect species that can grow up to the size of 4 inches. Most of them are found in North America and Canada. This species prefers standing or slow moving water and freshwater streams. They remain active in all the seasons but mostly appear in summers and look for the places in deep water to remain active during winters.

Their family name is ‘corixids.’ They are herbivores and feed on aquatic plants, and they don’t have the ability to bite. They suck the juices from the plants and dissolve through their saliva. They are fond of flying in the lights. They cannot swim upside down like other species.

Having the appearance like the land scorpion, water scorpion are the members of ‘Nepidae’ family of water bugs. They are mostly seen in the European parts. They are dark brown in color and 1 to 2 inch long. They use their front legs for swimming while the back legs for crawling. They are also known with the name ‘needle bug.’

As the name defines, backswimmers from the family ‘Notonectidae’ can swim on their back. The body is light in color from the back and dark from the rest of the parts and only a half inch long. If they lose the grip on the plants underwater, they start floating on the surface due to their light weight. Their diet includes small insects and other small aquatic animals.

How to Determine If You Have Water Bugs or Cockroaches?

Some species of cockroaches are referred as water bugs because they often look alike such as oriental cockroaches or black orient roaches but these both insects are quite different. Their habitats are entirely diverse as water bugs are purely aquatic, they eat, they reproduce in water while cockroaches are quite flexible, and they prefer warm and moist places. Water bugs are dependent on other insects and aquatic animals for food but cockroaches will consume almost every food item comes in their way. Unlike the water bugs, cockroaches prefer being under cover during the day and are mostly seen at night. Water bugs caused no harm to humans, but cockroaches spread various allergic diseases in humans by staying indoors and picking on the food items people use.

Waterbug infestation is unavoidable. They can take the way of your house through the water sources in your place. Once they get into the water filled placed in your house, they can also be seen in the other parts like other typical house cockroaches. You should control water bugs before they start making your food unhealthy. These small insects can make you face a mass destruction.

You can get them away by taking precautionary measures or by using natural pesticides such as: