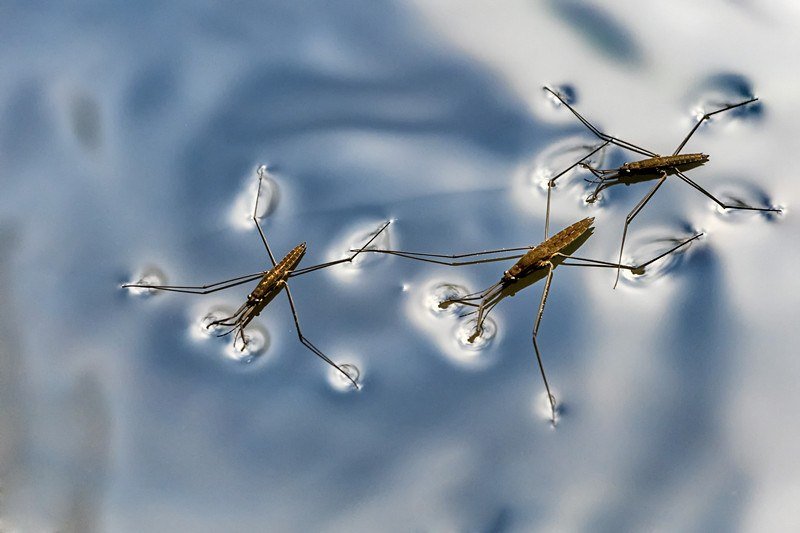 Water striders are also known as pond skaters or sometimes water skippers. They are about 350 species of water striders. They are usually observed running in different groups in lakes or streams. They are dark in color, and they grow up to 5mm in length. They have short front legs which help them to capture aquatic insects in ponds. They also have wings on dorsal sides. They use their middle pair of hydrophilic legs for propulsion and their hind pairs for steering. The adult water striders come in two species i.e. one with wings n the other without wings. They are found all around the season, except when the water is frozen in the north. Their expected life is three years or more. The water striders have two antennae and four antennae segments. Their antennae help to identify the species of these aquatic creatures. The thorax of water strider is said to be very long and narrow. It is relatively small in size. The length of water strider ranges from 1.6mm to 36mm. 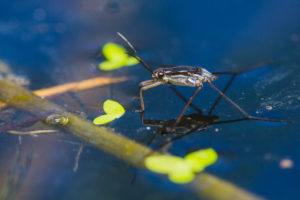 Water striders are usually seen eating aquatic insects and larvae which are there on the surface of ponds and streams. They are also fond of mosquitoes and dragonflies. They mostly prefer marshes and ponds. They are also found on top of the water.

The water striders are found eating aquatic plants at the surface of the water. They eat all the small insects that fall on the surface of the water. Their sensitive motion on water helps them to locate their prey more quickly. This water beetle pushes tits mouth into its prey; it helps him to suck the prey. Water strider does not bite human beings. They keep themselves moving so that they don’t become prey to any predator. They have no wings, and they protect themselves by overhanging trees.

Water striders have a simple life cycle. The female laid eggs on rocks. When the eggs get hatched, they undergo a process called incomplete metamorphosis. At this stage, the offspring are some hat similar to the adult’s one. It spends its life on oceans and ponds. The nymph stage in strides lasts for about ten days. The nymph resembles that of adults in behavior and eating habits. They are the length of 1mm. Almost 60 to 70 days are taken by the strider to reach the stage of adulthood.

Water striders have three pairs of legs. Each pair is used to function in a different manner. The hind and mid legs have water repellent hair that helps them to catch other aquatic insects. It has long and thin legs followed by a minuscule body. The length of adult water strider is about 1 inch in length. They use their mid and hind legs for locomotion. They are further connected with large coxae on both its sides. They are preferred strange for walking on land.

If we talk about their classification, they belong to the kingdom o Animalia also known as Animals. They belong to the class of Insecta. Their suborder is considered Heteroptera and infra-orders are Gerromorpha. It further belongs to the family of Gerridae.

6. How Water Striders Walk on Water 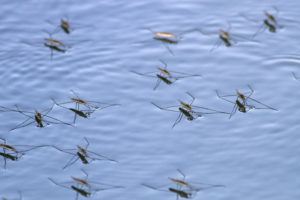 The water strider who is also known as pond skater is found walking on water. It has some high sensitive water repellent hair on its legs that can help them to detect the vibration of other aquatic insects. The Strider will detect its prey and quickly run to grab it. No matter how dense is the water, it does not sink into it. It is well known to exploit the water principle and stays on the surface firmly. The water strider can walk on water without sinking into it. As this water creature has three pairs of legs, it uses its middle pair to float on the water surface. This pair of legs is also used as oars to row a boat, and the rear pair of legs is used for steering purposes. Its weight also helps him to float off the surface evenly.

Research has shown that water striders are the most enjoyable water creatures to be observed. They are mostly found in the lakes and ponds of Northern Hemisphere. Up till now, there are 1700 species of water striders observed. They usually avoid getting captured by predators. Many types of research are done to them because of their ability to walk on the surfaces of water. Sometimes these aquatic creatures are confused with other aquatic insects such as Velarde. The territories are different for both ma eater striders and the female water striders. It is observed that the male territory is slightly larger than the female ones. When the mating seasons comes, these territories also emit vibrations to defend themselves. As there is no need to compete in routine, so they make large groups and roam around during none mating season. They also sometimes work together in groups to look for food and shelter. The groups formed by them become denser and they tend to disperse. They have no familial tendencies; they tend to leave the newly hatched offspring to avoid any cannibalism.

The mating process between the water striders starts unceremoniously. The male water strider simply mounts on the female without any foreplay. The chances are that she may try to resist, but even she does the male water strider will actively start to strum the water. The vibrations can attract the predators such as fish or birds. As the female is under the male, she will readily accept any assault. The male member has no concern with the pregnancy process; he does not have to look after the next generation. As he has plenty of sperm, he can mate as many females as he can. As compared to male water strider female has limited opportunities to lay eggs. The female water strider usually lowers her abdomen to allow the male mount on her easily. The female who does not want to allow the male to mate will raise her abdomen. It is also said that males that have access to mate the female remain with the same throughout the mating season. This makes sure that the young ones produced by the females are belonging to the mounting male sand in this ay it can spread its sperms. Some female prefers laying eggs at water edge where the water is calm and peaceful. The number of eggs laid by the female depends on the amount of food that is available to the female throughout the season. The duration of hibernation depends on the warmth of environment. 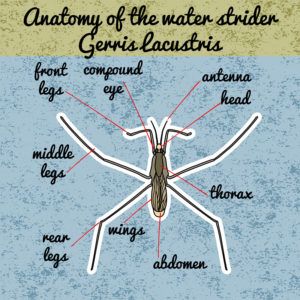 Handling the water striders cannot be that tough. They do no harm to the humans. Even if they bite, it won’t be that poisonous. The best way to handle them and get rid of them is to remove all the food sources from your nearby areas. They are mostly observed eating algae. Start by attacking the algae. Keep the pool clean to avoid the species of water striders.

Fill any spray bottle with water and soap. Shake well so that the mixture gets dissolved. No spray with the soapy mixture to prevent the water striders coming near your pool.

Keep the pool clean by brushing its side and the water line around the pool. Quickly fish out all the rotten leaves and dirt. Set low voltage bulbs lights near the pools because these water striders get attracted towards a bright light and cause them to fall in the pool. Also, try to trim all the tree and branches near your pool area. Maintain your pool by balancing the chlorine and Ph level in the pool. If y still require any service or help you can feel free to contact the near local pool service.

Other Fun Facts about Water Striders 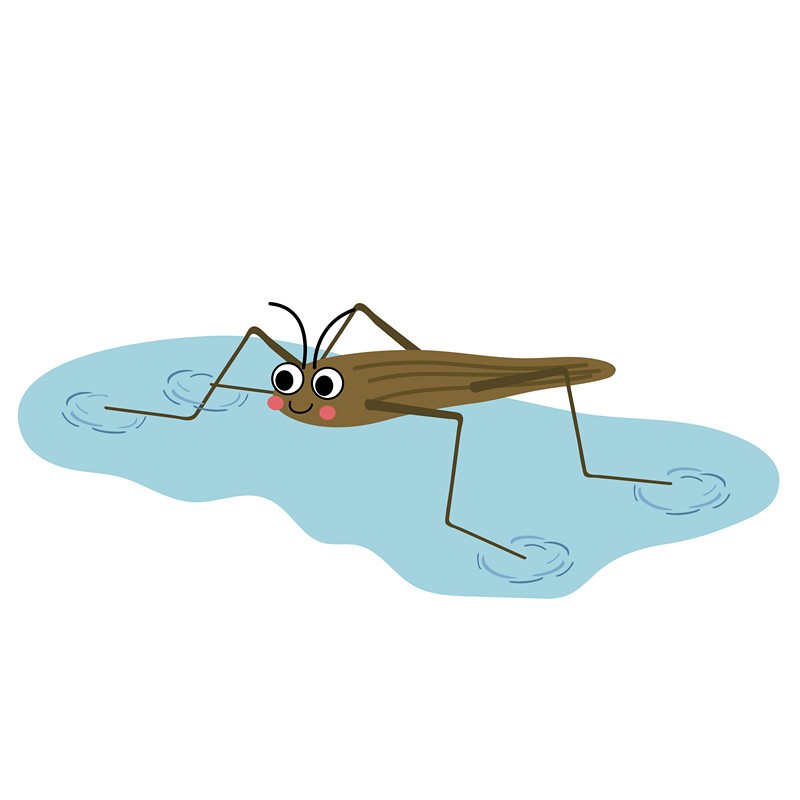