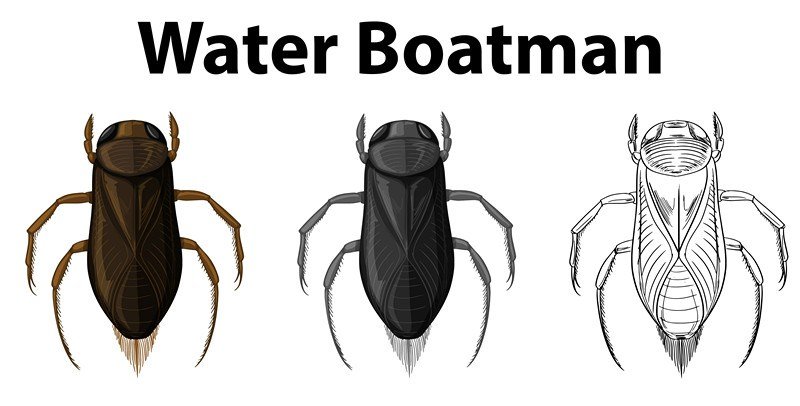 The water boatman, a common water bug, is a member of the ‘Corixidae’ family. The ‘Hemiptera’ order is classified into more than 300 species of the water boatman. They are found in quite a large number all around the globe and are commonly seen in still or running water such as ponds, lakes, rivers, etc. They are supposed to keep their air bubbles filled so that can breathe underwater as they lack gills like other aquatic animals. They are fond of flying in the artificial lights lit up at night near their residence. Their eating habits, sometimes, prove to be helpful as they feed on mosquitoes and other dangerous small insects. 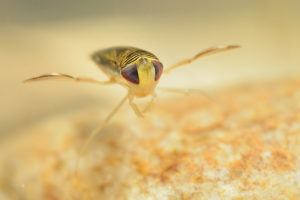 The body color of almost a half inch long water boatman is dark brown or black but can be light brown with dark spots, depending on the kind. They make the jerking movements during swimming with their long, hairy and oar-like hind legs. Then they have slender middle legs and short front legs that are strong enough to capture the prey. Having the triangular mouthparts, their flattened body is elongated and oval shaped. The air bubbles are hidden under their wings, used for the survival under the surface of the water.

Slow moving streams, lakes, rivers, ponds and the watery places where abundant of aquatic vegetation can be found, are the places where they like to live. Their home is on the muddy surfaces deep down in the water near the aquatic plants. These locations can be anywhere in the world regardless the water being fresh or salty.

Most of the water boatmen are non-predatory and are herbivores, but those are also found that hunt mosquito larvae and other aquatic insects. Non-predatory water boatmen satisfy their hunger with algae and the plant that are grown underwater. Their saliva helps them to extract the juices from the plants by dissolving them which they suck with their sharp mouthparts. They only can take the juices from the plants as they are unable to bite.

Reproduction experiences the three stages of development. Males attract the female by making sounds to mate. They lay eggs after mating that remain attached to the plants or water rocks before they hatch into the nymph. The nymph comes to the surface to fill the air bags. Then they undergo gradual molting to become an adult. The process lasts for six weeks. They get their wings in the final stage when they become adults.

Insects are classified in the orders, suborders, infra-orders and then families. An order of insects can have a large number of species. Water boatman is classified in the order ‘Hemiptera’ and the suborder ‘hetropetra.’ They have further grouped in the infra-order ‘Nepomarpha, ’ and their family name is ‘Corixidae.’ The family includes too many lookalike species like backswimmers and lesser water boatmen.

Water boatman can be named as the bug with a singing penis because they sing loud by rubbing their penis on their stomach for the purpose of inviting the females for mating. Moreover, the term used for it is stridulating. The sound they make is so loud that it is easily audible to the person standing nearby. The frequency of their sound can reach up to 90 decibels. The singing sound is clearly audible out of the water even after losing most of the sound while crossing from water to air. This is surprising that the sound with such high frequency is created by an insect hardly a half inch long.

If we specifically talk about the Corixidae species, they do not bite. However, there are some lookalike species from a different family that shares basic features with water boatmen and often called with the same name. So, in that case, we can say that they bite. You may encounter them while cleaning up your pool. Their bite can be hurting as they release a poisonous substance through the mouth to hunt the prey. So be careful while cleaning the pool from inside.

You get a burning feeling when water boatmen bite. The pinching feel can lead to the swelling of the affected area. These insects are not that harmful those with sensitive skin can get it in severe form.

The bite can be treated with painkillers and antihistamine. If your skin is sensitive or allergic and gets the severe reaction, consult a physician instantly.

Both the species may look the same, but they have got distinctive characteristic. They both are aquatic and can be living at the same place; this is the reason people find it difficult to differentiate and call all of them water boatmen. They are different in so many ways such as:

This is another type of water boatmen that is lesser water boatmen. These species are mostly seen in the United Kingdom. There are yellow lines all over their dark and boat-shaped body. Their long thin legs help them to swim, not on their back, on their bellies. Unlike the greater water boatmen (backswimmers), they choose to eat plants. Besides being under the water surface, they show up at night; artificial lights seem to fascinate them. They can be seen flying near these places. They need to be on the surface very often to meet their need of air supply underwater. They collect the air in their specific body parts to utilize under the water surface. The term ‘lesser water boatmen’ is commonly used in the UK for usual water boatmen.

Household swimming pools can contain abundant of water boatmen. Now the question is that what they find so appealing in the swimming pools except water? And the answer is that algae, grown on the walls of swimming pools. Not all the insects you find in the pool are water boatmen; some are backswimmers that may take water boatmen as their food. You can get interrupted by them while enjoying in the pool because of their biting habit, to be saved from them, you need to remove both the species. Use the following tricks to get them disappeared from the pool: