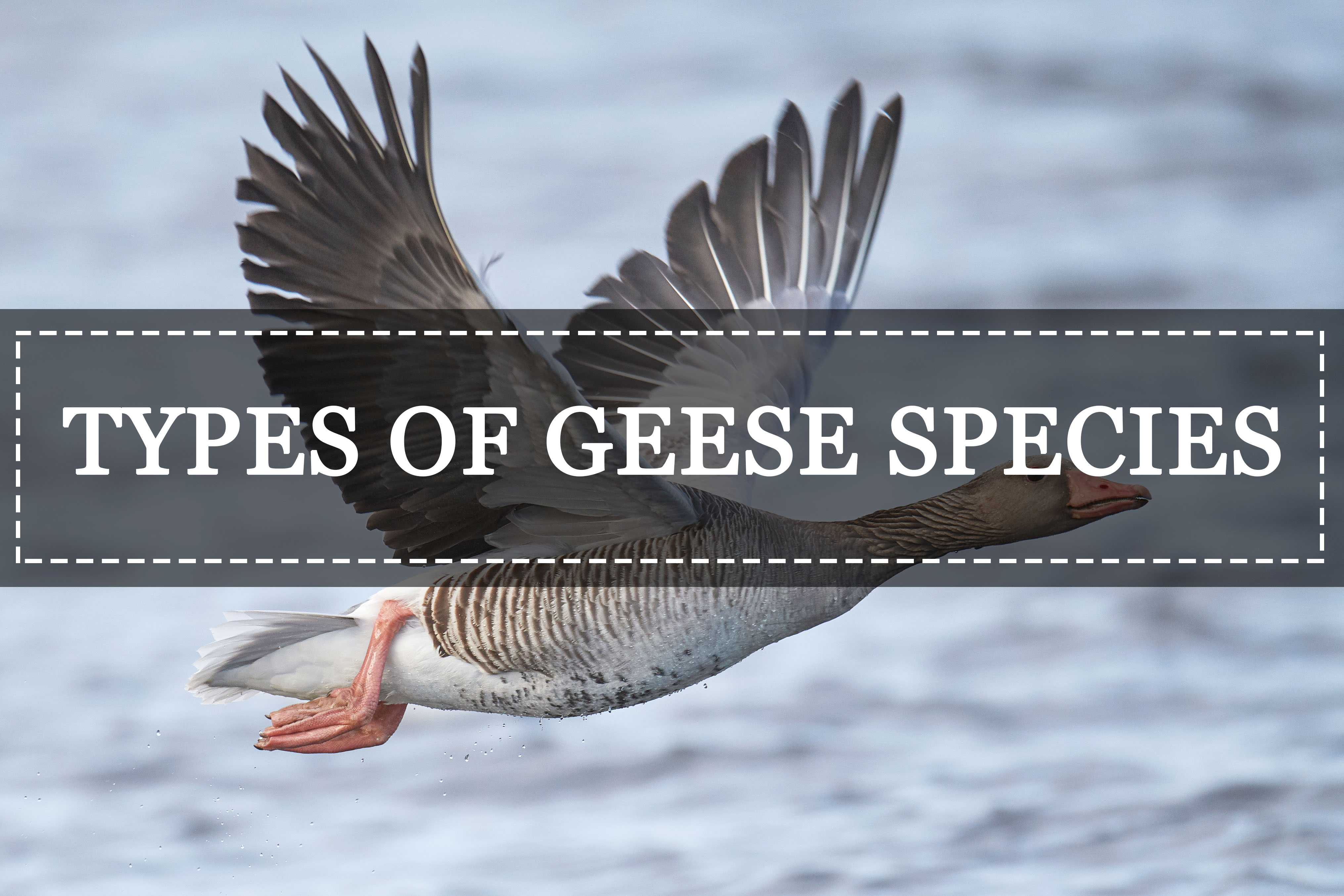 Geese are waterfowl of the family Anatidae. This group comprises the genera Anser (the grey geese) and Branta (the black geese). Chen, a genus comprising 'white geese', is sometimes used to refer to a group of species that are more commonly placed within Anser. Below is the list of some the type of geese species and breed.

Appearance: - The Barnacle Goose has a creamy-white face with a black streak from the beak to the eye, and glossy black crown, neck, and breast. The back and wings are dark silver-grey, with black and white bars, with paler grey-white underparts, and white belly. The small delicate beak is black. Both sexes are alike.

Notes: The Barnacle Goose belongs to the Branta genus (Black Geese) and came by its name because it used to be a widely held belief that in the Summer it developed underwater in the form of barnacles. It was later revealed that these geese actually disappeared in the Summer because they were breeding in the Arctic regions. If a barnacle is broken open then it shows a distinct resemblance to a goose. Appearance: The small Brent Goose has a black head, neck and upper-breast, with white markings or collar around the neck, short black beak, upperparts are greyish-brown, tail-coverts and sides of rump are white, underparts are pale brownish-grey or whitish, flight feathers and short tail are black, and the legs and feet are black. Both sexes are alike with the female being smaller. Appearance: The Cackling Goose is very similar in appearance to the Canada Goose and it can be very hard to tell the two apart. Generally, the Cackling Goose is smaller although the various sub-species do vary in size, the beak appears to be stubbier, the neck is slightly shorter, and their call is higher pitched. It has a black head and neck with a white chinstrap, light-brown breast, sometimes a white neck-ring, a grey-brown back, underparts from belly to tail are whitish, and the stubby beak and legs are black. Both sexes are alike with the male usually slightly larger.

Habitat/Range: Tundra, streams, coastal marshes, floodplains, and will graze in agricultural fields in winter. Native to North America, it breeds in Canada and Alaska (further north than the Canada Goose), and the Aleutian Islands, and winters further south, mainly in western USA, northern Mexico, and occasionally in eastern China, Japan, and eastern Siberia. Appearance: The Canada Goose has a black crown, front of head, and neck, with distinctive white cheek patches and chinstrap, light creamy-brown breast, grey-brown back, underparts from belly to tail are whitish, and the beak and legs are black. Both sexes are alike with the male usually slightly larger. It is very similar in appearance to the Cackling Goose.

Habitat/Range: Lakes, rivers, ponds, reservoirs, and fields in North America. Winters further south in southern USA and north Mexico. Also introduced to the UK and Scandinavia where they have established large feral populations. Appearance: The Hawaiian Goose has a black crown, black nape, black on the front of the face, black chin, buff cheeks and sides of the heavily furrowed neck, and dark ring at base of the neck. The body is grey-brown with upperparts having barred appearance, rump and tail are black. Eyes, beak and legs are black. Both sexes are alike

Notes: The Hawaiian Goose is a member of the Branta genus (Black Geese). It is the world's rarest goose. Hunting and predators reduced this species to just 30 birds in 1952, however thanks to leading conservationist Sir Peter Scott, the Hawaiian Goose was bred in captivity at Slim bridge, UK and re-introduced to Hawaii where numbers have now increased. The Hawaiian Goose can be found in captivity at all the WWT centres. The Hawaiian name Nene comes from its soft call. In Hawaii they have an extended breeding season and eggs can be found in all months except May, June, and July, although the majority of bird’s nest between October and March, and most clutches are laid between October and December. Appearance: The Red-breasted Goose has dark sooty black upperparts, neck, face, and throat with white patches between the eye & beak, white stripes behind the eye & neck, white band encircling the forebody, and distinctive chestnut-red on cheeks, fore neck, and breast. Tail coverts are white and the tail black. Legs, feet, and beak are grey-black. Both sexes look similar.

Habitat/Range: - Tundra, wooded tundra, and lakes in northern Siberia. Winters around the Caspian Sea in Azerbaijan, Iran & Iraq and the Black Sea in Romania, Bulgaria & Turkey.

Notes: The Red-Breasted Goose belongs to the Branta genus (Black Geese). It has declined in numbers over the last few decades. Over 80% of the population roost during the winter at just five sites, with nearby feeding areas threatened by changes in land use. These Geese breed in northern Siberia and often build their nests close to birds of prey such as the Snowy Owl, Peregrine, and Buzzard to keep themselves protected from predators such as the Arctic fox. During the 1950s the high use of pesticides used resulted in the decline of the Peregrine that helped protect these geese during the breeding season. Appearance: The Bar-headed Goose has a white head with distinctive black bars or stripes on its head, black extending down the front and back of the neck, leaving a white stripe down the sides of the neck, the upperparts and breast are medium grey, flanks are grey turning brown on rear flanks, vent and tail border are white, beak is yellow-orange with black tip, and legs and feet are yellow-orange. Both sexes are alike.

Habitat/Range: Wetlands, high-altitude lakes, and cultivated fields in central Asia, and Tibet. They winter further south in India, Pakistan, and Bangladesh which means they have to fly over the Himalayas.

Notes: The Bar-headed Goose belongs to the Anser genus (Grey Geese) and is one of the world's highest-flying birds as it migrates over the Himalayan mountains. Appearance: - The Bean Goose looks similar to the Greylag Goose but has a much browner plumage, and an orange yellow beak with black at the base and the tip. The head and neck are dark brown, breast and abdomen are light brown, flanks are dark brown with pale edging, vent and tail coverts are white, upperparts are dark brown with white edging, and the legs and feet are also bright orange. There are five sub-species which differ slightly in appearance and some ornithologists split them into two different species: The Taiga Bean Goose and the Tundra Bean Goose based on their breeding habitat

Notes: The Bean Goose is a medium to large grey goose of the Anser genus (Grey Geese). It gets its name because it grazes on bean field stubbles in the winter. Appearance: The Greylag Goose has a grey-brown plumage with pale fringes on the feathers. Underparts are light-grey with a white belly. Head and neck are grey-brown, beak is orange or pink, and legs are pinkish. Both sexes are alike.

Habitat/Range: Wetlands, marshes, and lakes in Iceland, Scotland, Scandinavia, eastern Europe, Russia, south China. Icelandic birds migrate to the UK in the Autumn, and other geese winter in western Europe, North Africa, and the eastern Mediterranean. The eastern race winter in north-west India, Burma, and south China. The Greylag Goose has also been introduced to the south-east and south-west of Australia.

Notes: The Greylag Goose is a member of the Anser genus (Grey Geese). Like many other geese, they migrate south during the winter but the Greylag is always the last to leave, lagging behind the others which is probably how it got its name. There are two distinct races: the western race extends from Iceland to eastern Russia, and the eastern race which is slightly larger and has a pinker bill. The Greylag is the largest of the grey geese and ancestor of the domestic goose. Appearance: The Lesser White-fronted Goose has a dark brown head and neck, the front of the face around the beak is white, a grey-brown plumage with pale fringes on the feathers, darker brown on the back and lighter brownish-buff on the undersides which has broad black bars streaking across lower breast and belly, dull brown flanks, vent and upper tail are white, the beak is pink, and the legs and feet are bright orange. Both sexes are alike. This goose is very similar to the Greater White-fronted Goose but is much smaller, has a smaller beak, yellow eye-ring, and whiter on the head above the beak.

Notes: The Lesser White-fronted Goose belongs to the Anser genus (Grey Geese) and is considered 'Vulnerable' as numbers are declining due to hunting, and habitat loss. Appearance: The Pink-footed Goose has a grey-brown body, darker brown head and neck, short bright pink beak with a black tip and base, white rump and vent, grey tail with white tip, and pink legs and feet. Both sexes are alike. This goose has been considered to be a sub-species of the Bean Goose and looks similar but the Pink-footed Goose can be recognised by its stubby pink beak, pink legs, short neck, and small rounded head.

Habitat/Range: - Tundra lakes, riverbanks, cliffs, saltmarshes, wet meadows, and agricultural land. Breeds in the east coast of Greenland, Iceland, and Svalbard. The Greenland and Iceland geese winter in the UK while the Svalbard geese winter in the Netherlands and Denmark, with small numbers also in Norway (where it is common on migration), northern Germany, and Belgium.

Notes: The Pink-footed Goose is a medium-sized goose of the Anser genus (Grey Goose). Very large wintering flocks can be seen grazing on farmland and large skeins of these geese make a deafening high-pitched honking call. The population is large and has risen over the last 50 years due to protection from hunting.