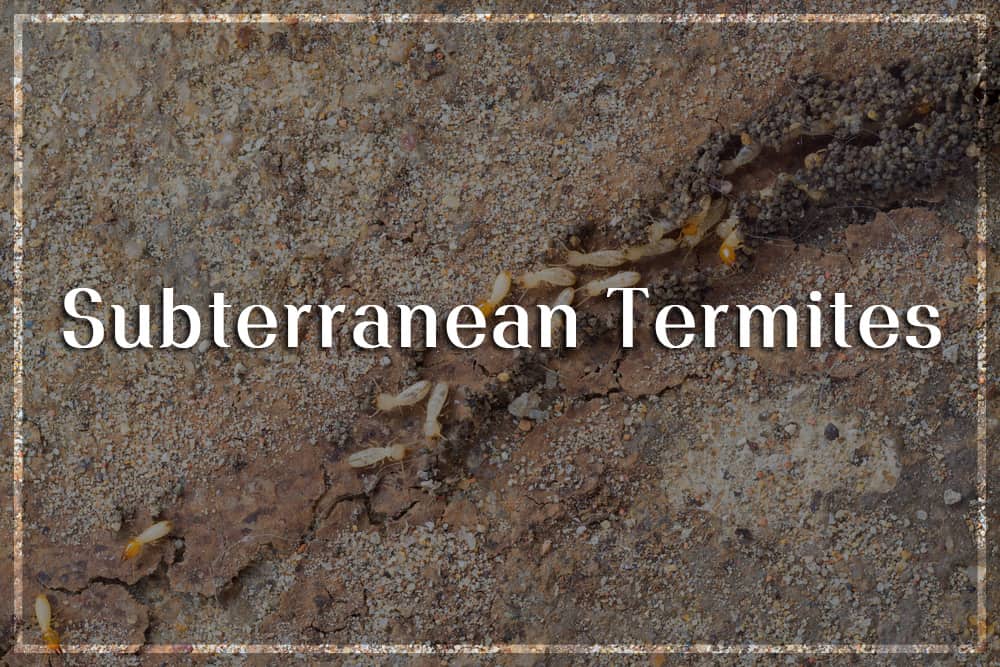 Wonder what can potentially be a bigger threat to houses in the US than fires and storms? Well, believe it or not, it’s the Subterranean Termites. The advent of the central heating in homes and the widespread installation of HVAC systems in all households has promoted them as the breeding ground for them. Their population has dramatically increased and has become a threat to your home. Studies show that on an average 13-14 colonies of these pests has infested every acre of land in the country.

Here, we are going to take you through all the information you need to have about subterranean termites about where they nest and how can you identify them.

What are Subterranean Termites?

They make the majority of the population. These are 3-mm long, soft, and blind creatures without any wings. They support the entire colony by feeding upon the wood, they construct and look after the upkeep of the tunnels, and they take care of the eggs and the young ones. Other than that, they are responsible for the defence and grooming other termites as well.

They resemble the worker caste in terms of appearance if not for the large yellowish-brown head which is rectangular and is complemented with long-black mandibles. They make the main defence of the colony against the ants and other pests which might come there looking for food. With the Fontanelle (frontal gland pore) they secrete a terpenoid compound which gets developed within the pest’s body as they grow genetically. They comprise of 1 or 2 per cent of the colony and are completely dependent upon regurgitated food synthesised by worker termites as they cannot eat.

Elites of the colony, reproductive caste can be distinguished from the rest through the presence of wings on them. They do negligible work for the nest as compared to worker caste but are well able to feed themselves.

They grow up into Alates, which are sexually mature adults capable of reproducing for the tribe. They are about 8.5-10 mm long till wings and have compound eyes. One can distinguish them with similar pests by observing the position of their ocelli. As the distance between the compound eye and ocelli in these creatures is greater than others. When they develop from nymphs into adults, they are categorised as kings and queens. A queen termite can lay up to 2,000 eggs every day. In addition to that, they can live for up to 25 years.

Lifecycle and Behaviour of Subterranean Termites

Both, eastern and western Subterranean Termites are similar in terms of life-cycle and behavioural patterns.

These alates swarm out of their nest and begin excavating their own tunnel, then they mate and are known as Kind and Queen Subterranean Termites. These dealates are the primary reproductive which give rise to an entire colony.

Swarming is generally is a process which takes place from February to April when the alates lose their wing buds and begin excavating new colonies to nest and mate in. It takes a few pairs of swarmer more than a couple of years to build an entire colony and it is only after that you will realise the presence of Subterranean Termites in the foundation of your home.

As the studies show, these termites are rarely choosy in terms of which wood they can colonise as any deal wood or fallen tree in contact with wood works for them. In damper climates, the fungus on the wood breaks down the wood and make it easier for the termites to digest.

Trophallaxis is the process through which the give and take of gut contents amongst the termites, workers and soldiers, in this case, takes place. This effective utilisation of digestive components is one way in which they are interdependent.

Distribution and Habitat of Subterranean Termites 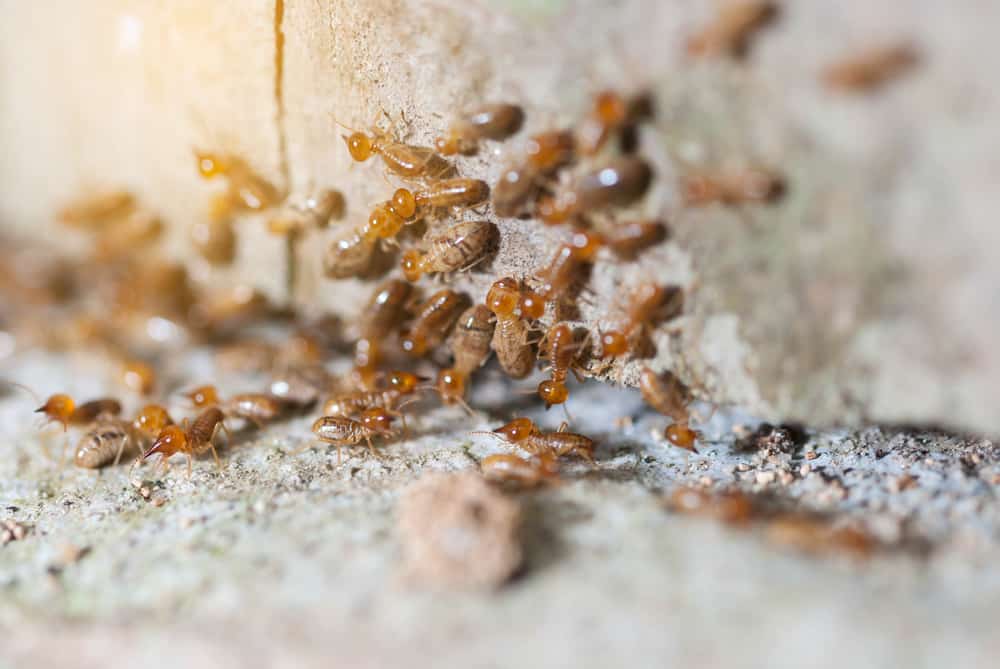 Speaking of Formosan and Eastern Subterranean Termites, they are present throughout the eastern half of United States including Texas along with the Ontario region of Canada. Apart from these regions, they are a threat worldwide as the South of France, parts of Germany, Canada, Uruguay, Chile and the Bahamas have been infested by these creatures.

As for Western Subterranean Termites are a major threat to homeowners in the western parts of the United States such as Nevada, Washington, Idaho, and California.

These are petit multicellular organisms which have a symbiotic digestive system in which the worker caste breaks down the cellulose present in wood to help others digest it. Due to which, they nest in the damp or dead wood present in proximity with damp soil.

Damage Subterranean Termites Can Cause

Subterranean termites are aggressive wood eaters and especially their western species is considered most dangerous of them all as they can enter the most guarded of the structures with ease. When the termites infest the areas which cannot be checked by termite inspectors, the threat increases exponentially. Home-owners should protect their patios, masonry, fire heaths, and cracks in the expansion joints and other wooden rims in the house.

These termites can dig into openings which are less than 1/8th of an inch wide. Additionally, they are a threat to home’s timber as well as they creep in through the carpets into the flooring. Subterranean termites damage is not limited to wooden structures but they can make it into your house through plastered and metal sidings too. Here, wooden furniture, floors, ceilings, doors, and cabinets make good fodder for them.

Subterranean termites damage is well known to people in the suburbs of North America as once they infest a house or a building, there is no way one can escape huge losses if not addressed the issue in time. They, unlike some other kinds of termites, nest completely underground and are pretty intuitive when it comes to the protection of their colony.

If you try to address the problem of termites without expert supervision, they are likely to disperse and relocate. This will lead to added damage at a new location.

Unlike other species in the parts of Africa which form visible mounds above the ground, Subterranean termites are sharp creatures which stay underground, making it difficult to detect the infestation in one go.

The infestation sometimes appears like water damage because termites prefer to collect damp soil and faeces in order to make breaking down of the wood easier. This water-damaged surface is accompanied by a mildew odour and maze-like patterns on furniture or floor. This destructive tunnel-like structure can be as much as 50 metres wide in radii.

They dwell in the tunnels they build underground, near the foundation of houses and source food from the wooden structures in the house.

The absence of shelter tubes as built by other species makes detecting them more difficult. Then again, when they dwell into the woods or roots of trees, to escape attack from the invaders, the soldiers build a longitudinal cut above the roots for an easy escape.

A hollow sounding wood will give you a clear indication of termite infestation. As the termites keep the outer, healthier surface of the wood intact to protect themselves, one tap can help you determine if your beloved piece of furniture is infested.

2. The Division of the Colonies

3. The Habits of Treating the Frass

How to Prevent Subterranean Termites from Home?

While an expert can always help you out with termites, why wait for serious damage to wake you up! Here, we have some ways in which you can avoid the very chance of termite infestation in your home.

On average, Americans are known to spend millions of dollars on termite damage repair and protection. These tiny creatures can cost you your home and a fortune.

Now that you know the level of damage Subterranean Termites can cause to your home and how you can identify them to protect your home from an infestation, wait no longer and get going!