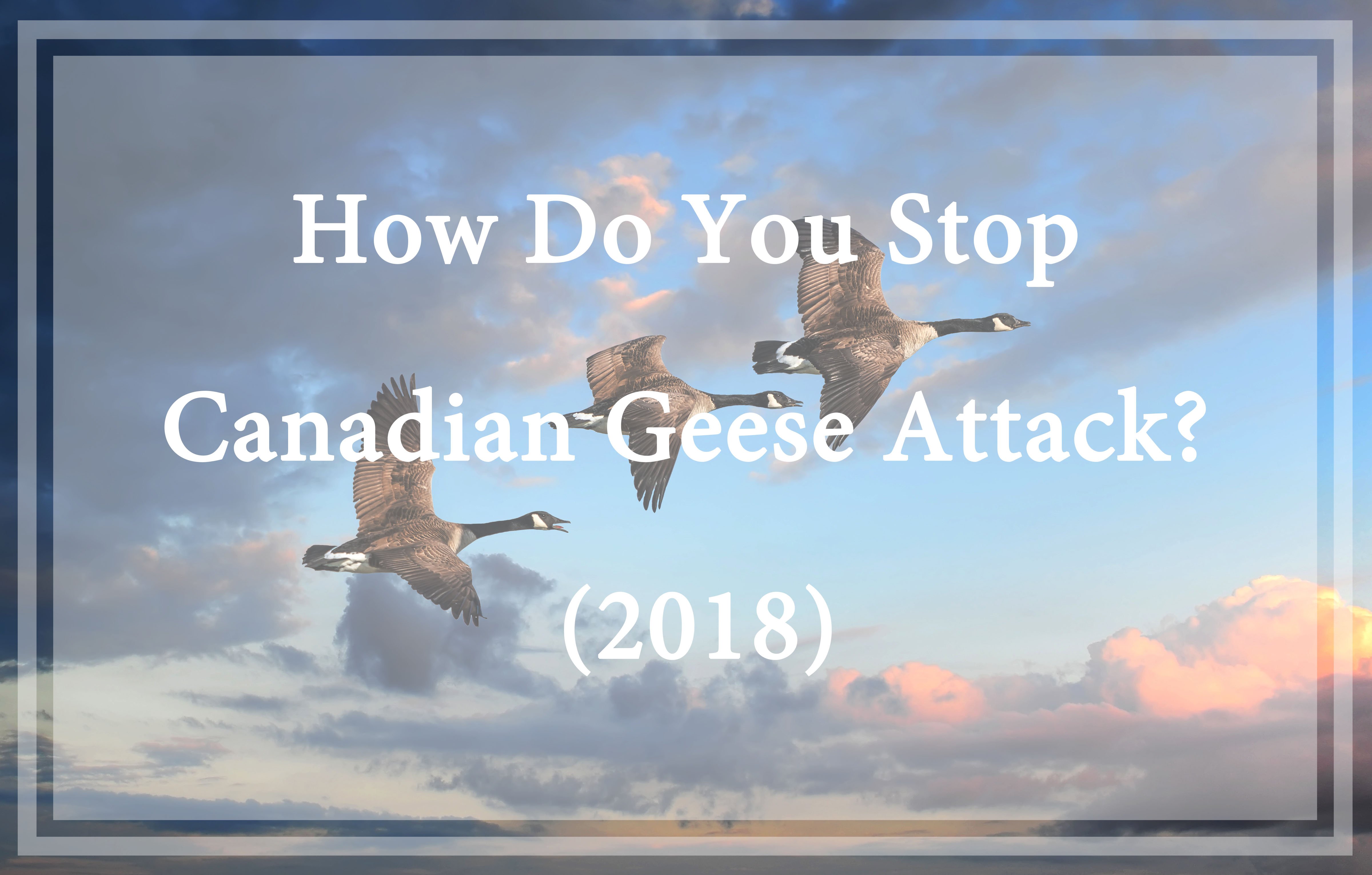 It is no news that geese are aggressive, hence, this is not about giving you loads of information about the aggression of geese because that will be kind of unnecessary. This article is to make you acquainted and be abreast with information concerning things you can do in order to ensure that geese don’t continue to have the license to do whatever they wish around you because when you allow them to, the result this will produce will not be palatable at all.

It is imperative to know that spring is breeding season for Canada geese and you really need to be sensitive around this period of time because geese tend to really run rampage around this period of time and can really be a menace. The key reason for the aggression of Canadian geese around this time is because they become suspicious that people may damage their eggs and they will do all they can to avoid that situation. The birds often become aggressive if they believe that their eggs or goslings are threatened. Even if you don’t see a nest around this time, don’t be too confident because one may be nearby. If you get too close, a goose may attack to defend it even when you are not planning to do anything harmful to their eggs. Canadian geese are so notorious that they can’t distinguish between a friend and a foe, they attack all alike.

Goose doesn’t attack without leaving their mark on the person and it is no news that most goose attacks on humans result in minor or no injuries, but severe injuries can also happen and this is the major reason why you really need to be careful around them. There are more fatal stories such as the fact that Goose attacks have resulted in broken bones, head trauma, and emotional distress. It sounds like a horror movie that is not true but that is the fact. It is not like the geese are truly so strong enough to directly cause these injuries, what often happens is that many of these injuries occur when the person tries to avoid an attacking goose and trips and falls.

If you think you can be benevolent to geese and be on their good books, you are very wrong because what exactly is the major reason for their menace. The more they are fed, the more wild geese become more familiar with people and the resultant effect of this is that they lose their natural fear of humans and will often build their nests close to people. They will end up become noisy neighbors who become ungrateful to their host because you will soon find out that the geese will then become aggressive if humans get too close to the nest. This is one of many reasons why it is not a good idea to feed wild geese.

Geese have a somewhat developed organized family life because the males referred to as the gender is often seen protecting the females that do nothing but sit with the eggs in the nest during the incubation period. This better explains the reason for the aggression of the male geese because he usually stays nearby and stands guard. If a potential predator which unfortunately maybe you and your friends just trying to have a jolly time without thinking about any geese gets too close, the gander will often give a warning call and try to chase you away. If the intruder does not leave quickly, the gander can become aggressive.

Keep in mind that geese demonstration forcefully on the grounds that their impulses constrain them to ensure their young, similarly as people and different creatures do. Genuine wounds from goose assaults are phenomenal, yet it is best to evade geese however much as could be expected amid rearing season.

The delightfully manicured yards and superb water highlights add to the ideal scene, however, they likewise pull in Canada geese. Geese can absolutely add to this magnificence, in characteristic settings. In any case, one set can rapidly move toward becoming 50 flying creatures after some time, and even one set of settling geese can turn into a threat to individuals honestly going by their domain.

Canada geese display extremely solid family bonds and regularly come back to the place they were destined to raise their own particular families. Female geese lay in the vicinity of 2 and 8 eggs, which brood for around 28 days. Amid this settling season, geese will turn out to be to a great degree defensive and display forceful conduct.

1. The Aggressive Nature of Canada Geese

During spring, Canadian geese tend to stay in a certain place and avoid walking around. They become aggressive particularly during this period because this is when the female often lay eggs and incubate them which makes the male in particular very aggressive in order to preserve their progeny. Thy would attack anyone who comes close to where their nest is at this point in time and they will keep doing this until they are sure they are not at risk anymore. You really need to be careful and ensure you don’t go near their nest around this period because you can end up becoming yet another victim of geese assault and this can be very fatal because some people have suffered fractures of their bones as well as injuries by running into dangerous objects during the attack. As a matter of fact, you may have fed them the other day and still become attacked by the same set of geese the following day if you trespass.

You cannot just hurt geese the way you like because Canada geese are ensured under the Migratory Bird Act. Things could have been less complicated without this because you could have easily treated them harshly and even kill them if the situation becomes totally out of hand but you cannot hurt them without committing a crime as a result of this enactment. Any harm to the geese or their young ones is considered illegal based on this and punishable by the law. It is therefore better that you plan in such a way that you can defend yourself against them without hurting them.. A strategic well thought out plan to stop them without committing a crime is what you need rather than also retaliate by becoming aggressive towards them too.

2. How Do You Stop Canadian Geese Attack?

3. What Can You Do If A Geese Attacks You?

According to experts, the most essential thing is to keep up eye to eye connection and a quiet disposition as you step back while utilizing your fringe vision to pay special mind to impediments. Turning your back or concealing your eyes will in all probability urge the goose to proceed with its animosity; so will acting antagonistic or fleeing. You just cannot afford to just run away in panic because the resultant effect of this is that you risk breaking your bones or injuring yourself in other very harmful ways because the geese will take a cue to chase you in such a way that you may run into very dangerous objects and this may be very bad for you eventually due to the injuries you may sustain.

Late-winter is prime goose settling season, and since geese demonstrate extraordinary home site loyalty starting with multiyear then onto the next, it’s the hardest time to expel them. At the point when goslings incubate, the parent geese wind up flightless because of shed. All things considered, there are a lot of things you can do to guard your property.

4. Maintaining A Strategic Distance From Altercations

In your best interest, not getting close to the geese at all is your best bet to avoid being attacked by them. Since geese who assault once regularly turn out to be more forceful, you should attempt to stay away from contact. Attempt to decide precisely where the home is found, and keep clear from the region. While being assaulted by your pet goose may appear to be clever, geese and their relatives are vast feathered creatures that can cause genuine wounds. In 2012, the Chicago Sun-Times detailed that a swan (Cygnus sp.) caused an Illinois man to suffocate. While geese are littler than most swans, they will probably assault apparent dangers and that is more reasons you need to avoid being in touch with them.

You need to know that you are not helpless in case you are attacked by a goose. Being attacked by a gooses is not a palatable experience at all but in case you find yourself having to endure that, it is not a hopeless situation as some people make it sound. Geese have astounding vision and are very adroit at perusing non-verbal communication. At the point when gone up against with an irate goose or gander, look. This will show that you are not an obvious objective, and may persuade the feathered creature to keep his or her separation. Keep your shoulders square with the geese, and gradually step back, utilizing your fringe vision to dodge snags. The objective is to expel yourself from your flying creature’s settling region, and soon thereafter the assault will stop.

6. On A Closing Note

The attack of geese is very real and you don’t need to be jolted into that realization by being attacked by one. You can definitely plan for it and you can even avoid the embarrassment of being threatened and harassed by a bird by some methods that have been highlighted vividly so far in this article. You will do yourself a whole lot of good to harken to this advices and make your environment free of this unrepentant nuisance of a bird which is exactly what geese can really become when not curbed.

Don’t say you were not told, begin to put things in place early so that you will not be the next victim of a geese assault.