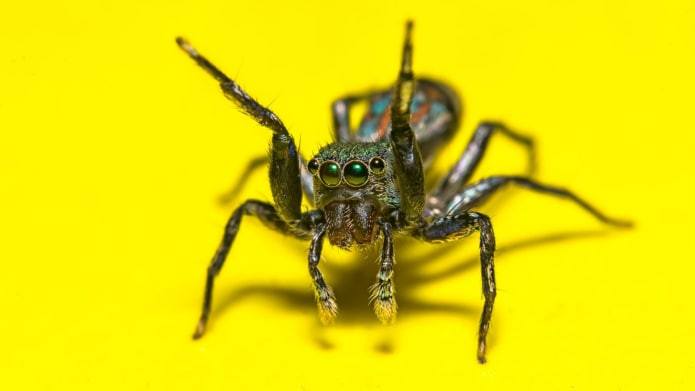 You’ve been bitten by a spider – ouch! You know that most spiders are harmless, but what if you were unlucky enough to get bit by a venomous species?

Unless you have the specimen on hand, you’re playing a guessing game trying to figure out what bit you.

We’re going to help you identify the nippy perpetrator, so you can seek treatment and get on with your life.

You know you’ve been bit by a spider, but you’re not sure which spider. Knowing what different bites look and feel like, helps you have a better idea of which little critter nipped you. Let’s take a closer look at the most popular spider bites.

The brown recluse spider isn’t aggressive, and typically only bites when it feels threatened. These guys love to live in barns, porches, attics, basements, closets and woodpiles.

These spides can be tricky because most people don’t even know they’ve been bitten until they start seeing the damage. Brown recluse bites are usually painless, but some people do experience a slight burning sensation that feels like a bee sting.

Symptoms of the bite develop between two and eight hours after the bite occurs.

Brown recluse spiders inject venom when they bite, and that venom is toxic to tissues and cells. In other words, a bite from a recluse spider will cause tissue death.

Although extremely rare, in some cases, the effects of the body’s immune response can actually cause severe symptoms, such as:

Death is rare, but it can happen. So, if you’re bit by a brown recluse spider, get medical treatment right away. If you can, consider bringing the spider with you (safely and dead) to the doctor’s office for correct diagnosis and positive identification.

The black widow has a notorious reputation for being dangerous. It’s the spider we associate with Halloween, and the creature that literally devours its mate whole before the deed is even done.

Widow spider bites can be fatal in children, so it’s crucial to get medical attention right away. Even adults should head straight to the emergency room if they’re bit by this poisonous spider.

The good news? While these spiders can be dangerous, they aren’t aggressive, and will only strike if they’re provoked. The females are the only ones who bite.

Like other venomous spiders, the black widow produces a type of protein venom that impacts the victim’s nervous system. The widow’s venom is actually one of the most potent venoms produced by an animal.

Unlike the brown recluse, you’ll know if you’ve been bit by a black widow. You’ll experience pain as soon as the bite happens.

Along with pain, you may also experience:

In very rare and extreme cases, the black widow’s venom will cause seizures and death. Thankfully, death doesn’t usually occur in healthy adults.

The hobo spider is one of three venomous spiders in the U.S. that can be dangerous. But scientists still debate how toxic the spider’s venom really is.

In some cases, a bite from a hobo spider can cause necrosis, or death of tissue.

Hobo spiders are larger in size, and they tend to hide out in dark places. They can be aggressive, and they’re known to bite. But like with other spiders, they will only bite if they’re provoked.

Symptoms of a Hobo Spider Bite

Dry hobo bites account for about 50% of all hobo spider bites, which is good news. Still, if you’re bit by this spider, make sure that you get medical care right away.

Tarantulas can be a frightening sight. These furry spiders are big, and they are venomous. While the venom isn’t dangerous, it can cause an allergic reaction.

Symptoms of a Tarantula Bite

If you’re bit by a tarantula, you may experience:

If you’re bit by a tarantula, be sure to wash the area with warm water and soap. Pain and inflammation can be eased with an ice pack.

While a tarantula’s bite isn’t necessarily dangerous, you should still seek medical attention. You may develop an allergic reaction to the venom.

Also known as the banana spider or the armed spider, the Brazilian wandering spider is part of the genus Phoneutria, which means “murderess.”

That’s a fitting name for this spider, which is one of the most venomous spiders on Earth.

One bite from this spider can be deadly, especially for children. But not all hope is lost if you’re bit by one of these spiders. Antivenin can save you from death.

Thankfully, bites are rare and envenomations are usually mild. But this can be a deadly spider bite if you don’t get treatment right away.

Wolf spiders are common in the U.S., and they’re typically non-aggressive. While their venom isn’t dangerous, these spiders can produce painful bites.

Pain from a wolf spider bite can last up to 15 days. If you’re bit by one of these guys, you may want to see the doctor just to get professional medical advice and medication for the pain.

The camel spider isn’t technically a spider, although it looks like one. It does belong to the same class which includes spiders, scorpions and mites.

While not aggressive towards humans, these spiders can produce nasty bites that require medical attention.

These are non-venomous spiders, but their bites can be very painful. Infection is the biggest concern with these bites because these spiders leave behind large open wounds.

If you’re unlucky enough to be bit by one of these guys, be sure to see a doctor right away to get the wound treated.

Jumping spiders are extremely common, and these critters have fantastic eyesight. They’re agile and have great reflexes, too.

While they can and do bite, they normally only strike if they feel threatened. Thankfully, their bites aren’t usually harmful to humans.

In fact, most jumping spiders would rather run from humans than attack.

Still, if you’re bit by a jumping spider, see your doctor and bring the specimen that bit you if you can.

Spider bites are different from mosquito or tick bites. Because most spiders are non-venomous, victims only experience pain and swelling in the area.

In some cases, a venomous spider’s bite can cause a life-threatening allergic reaction or severe anaphylactic reaction, but these reactions are rare. Venomous spiders can also cause swollen lymph nodes or itchy red welts.

Fortunately, most people just walk away with a skin rash or a skin bump after being bit. For most people, harmless spider bites are nothing more than a nuisance.

When to See a Doctor

Whether you’re bit by a common household spider or a huge tarantula, get medical attention for your bite. Unless you have the specimen, you have no way of knowing what type of spider bit you.

A doctor can tell you whether you have anything to worry about and how to treat the bite properly.

There’s no real way to prevent spiders from entering your home or your yard. Sealing up holes and cracks along windows and foundations can help, but spiders have a way of sneaking into homes and making them their own.