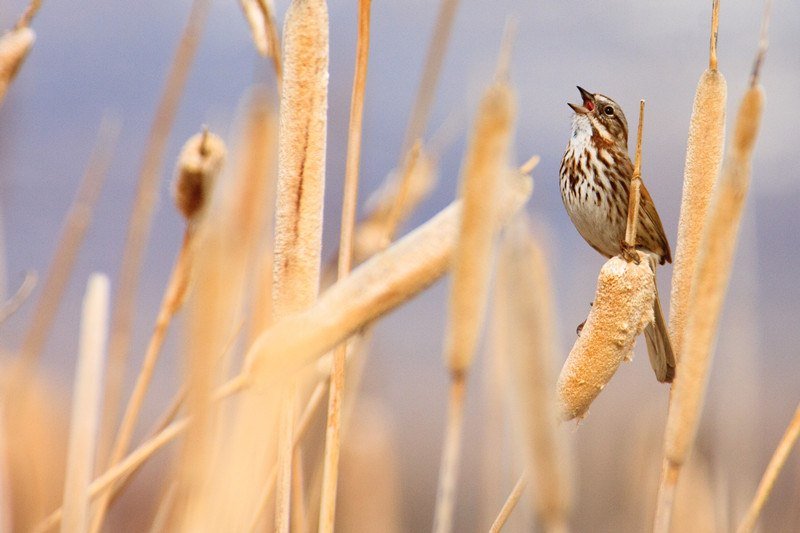 The song sparrow, whose scientific name is Melospiza melodia, is a mediocre sized American sparrow. Among all other species of American sparrows, song sparrows are one of the most unpredictable, and adjustable species. The species can be seen everywhere in abundance. An average adult song sparrow contains back of dark brown color and underparts of white color. The upper parts of a body are streaked with dark colors, and there is a dark brown color mark in the middle of their chest. They also possess streaking on the side of their body. They have rounded brown colored head, but if you look at them carefully, then it appears to be a lovely combination of slate gray and reddish brown color. Their tail is brown, long and rounded, legs are pink, and the beak is small with a conical shape. The neck is whitish in color, with broad grayish eyebrows and strikes on a face. The baby song sparrow is duller in the shade, and the streakings are also present.

Among their different subspecies, song sparrow varies widely in size. Usually, their body length ranges from 4.3 to 7.1 inches, and the body mass ranges from 0.4 ounces to 1.87 ounces. On average, song sparrow possesses a lifespan of almost 11.3 years. Both genders of song sparrows look similar. Usually, song sparrows are confused with other variety of bird species dispersed in North America. Whenever, you see bird species with a streaked body, grayer tail, wandering in a wide, wet or shrubby region, and utters a smashing song, then it is none other than a song sparrow.

The favorite habitat of song sparrows is typically a bushy habitat, located alongside the ponds, deserted meadows, and forests edges. Song sparrows can be seen in temperate and terrestrial habitats. They usually prefer locations present near water bodies. Firstly, song sparrows search for an appropriate place to build its nest. Usually, they do the searching in the form of a pair. Secondly, they prefer to make their nests buried in weeds and shrubs; it can be located both on the ground and sometimes at the height of more than 15 feet from the ground. They don’t get scared from human, and that’s why they can also be seen building their nests near human houses hidden inside flower beds.

After getting a proper site to build a nest female stars building nest. Female song sparrow usually builds the whole of the nest, and male sparrow only helps in collecting building material. As soon as the building process starts, male song sparrow will change and renew its singing pattern. Female song sparrows start building its nest usually at early morning and complete nest in almost four days. They build plain, strong and cup-shaped nest using weeds, barks, grasses and hairs of different animals. Their nest is 4 to 8 inches wide and 2.4 to 4 inches deep. 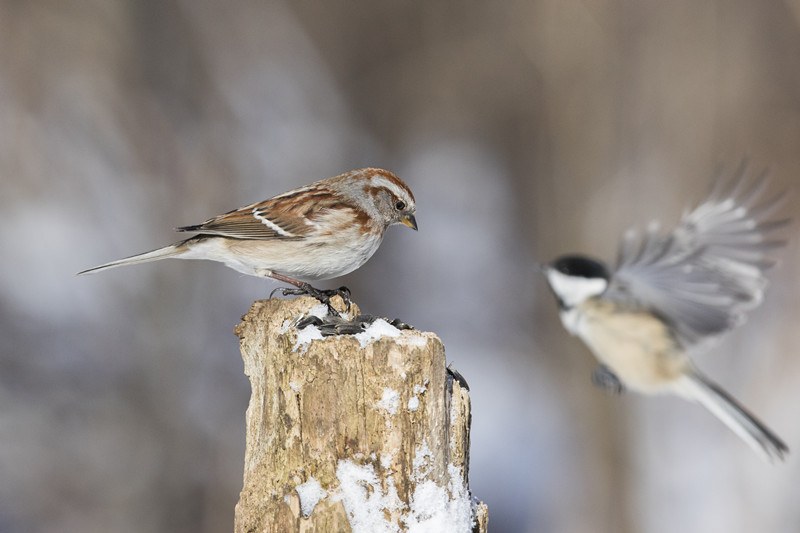 The mating behavior of song sparrows is monogamous, though polygyny has also been observed in few cases. As breeding occurs in male sparrow territory, therefore, female song sparrow selects her partner on the base of a superiority of his territory. Male sparrow depicts its willingness by jumping and swooping near its female partner. However, male sparrow also jumps around female of its neighbors when its male partner is not present around. But female, being a more loyal partner, disallow any mating calls. Meanwhile, male sparrows protect his partner from strange sparrows but to claim their territory, both male and female come together. Usually, the pair is lead by a male sparrow, who by enlarging its wings, wheezing its plumage and by singing on different main branches claims its territory. The female sparrow sings a high-pitched note or produces sound from its nasal cavity to claim its region. Male song sparrow usually doesn’t feed its female partner.

Breeding season usually starts in April and finished in the month of August. The clutch size varies from three to five eggs. Eggs are blue or greenish-blue in color, oval in shape and with dark-colored spots on it.  All sparrows start breeding by the age of one year. Their incubation period lasts for 12 to 14 days, and it varies along with varying outside temperature. After hatching, both parents look after baby sparrows, though a mother spends more of his time as compared to the male parent. After spending 3 to 4 days at nest motionlessly, baby sparrows open their eyes, and they become able to take flight after ten days. They baby sparrows become fully independent at 18th or 20th day. However, parents continue to feed their young ones for twenty more days and at the same time, starts laying eggs for next clutch.

The major part of song sparrow consists mainly of seeds, grains, berries, and grass. These species eat insects during summer, which include ants, wasps, caterpillars, beetles, grasshoppers, spiders and many others. However, during winters, they usually feed on seeds, weeds, and grasses. Among both partners, female sparrows need additional protein and healthy diet to lay eggs. Therefore, to fulfill these requirements, they consume high-protein food like insects and different invertebrates. These sparrows have also been observed consuming flowers, leaves, algae and shoots during spring. Those song sparrows who live across shoreline and islands also consume small fish, snails, and crustaceans. 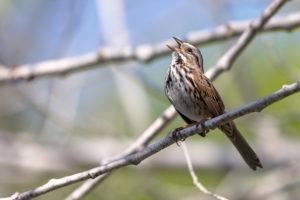 Song sparrows can sing a huge variety of songs. They can sing almost twenty unique tunes and thousands of varying unrehearsed song on their underlying theme. Keeping this ability in mind, these birds have been named ‘song sparrow’ and truthfully fits on them. Their songs are a combination of recurring notes, speedily emitting unique notes and shrill. The songs are so much unique, accurate and clear that it can be identified by humans easily. Each song can be identified uniquely through their vibrations. Although they can sing a variety of songs with different notes, vibrations, and themes, they usually stick to one song before shifting to another one. The songs last for 2 to 4 seconds. In the start, song sparrows usually learn their singing from nearby sparrows, and they usually follow the same pattern and rhythm. These song similarities help them in identifying their neighbors, and also to distinguish their neighbor from strangers. During breeding season, male song sparrow claims their territory by singing a song. This singing usually starts in the month of February.

Common predators that attack song sparrows include hawks, owls, and cats. Whereas occasional predators include dogs, snakes, and American kestrel. Song sparrows usually observe their fellows and learn how to identify and fight with their enemies. They also use their natural gut feeling to feel the threat of approaching predators. The most common parasite for song sparrows is cowbird. Songbirds identify cowbird and attack them if they try to access their nest. The song sparrow species learn this dealing by seeing their neighbors. The eggs of these species and cowbirds look almost similar. The only difference lies in the greater size of cowbirds’ eggs.

Besides basic facts and details of song sparrows, there are many remarkable facts about the species. Here, we will discuss few of them: 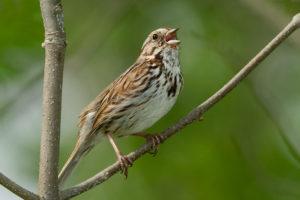