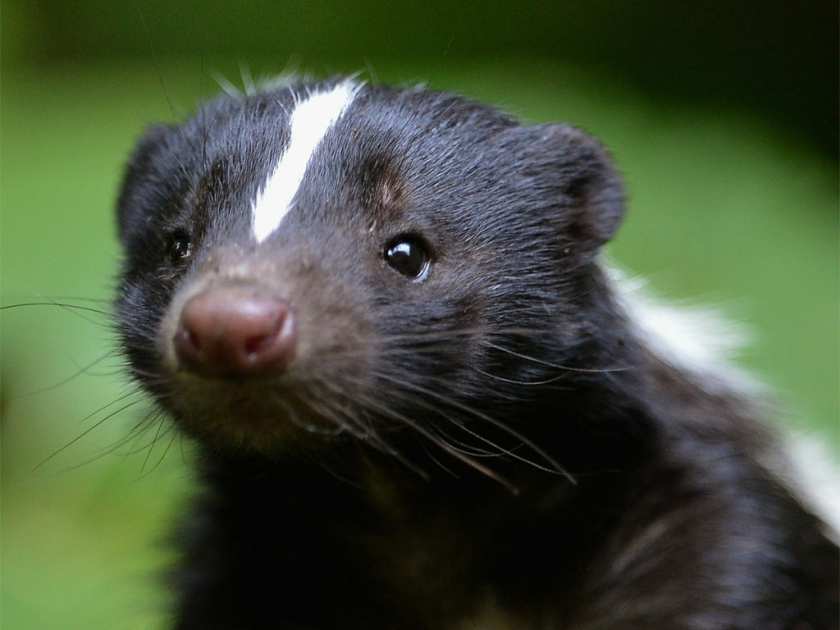 Besides from knowing that they are small and that they have distinctive black and white stripes, do you know something more about those furry animals? Sure, you know that they are capable of producing particularly noxious odors which are going to cause an instant reaction in your body and they use them for protection. However, there is quite a lot to be told about them.

There are quite a few things which need to be specified when it comes to skunks. Right off the bat, they are usually going to get to about 20 or 30 inches long including their tail and they will usually get up to 10 pounds in weight. They have a rather short life span in comparison to other small animals averaging their size. They usually live in the wild for about two to four years, depending on quite a lot of different variables. They have characteristic black and white stripes and they have long claws that they use for digging. Furthermore, they also have strong forefeet for the same reason. With this being said, let’s have a look at some additional and more detailed facts.

Geography of the Skunk

There are four different types of skunks and the one which is most commonly recognized in the SUA is the striped skunk. He can be found in the half of southern Canada and to the northernmost parts of the country of Mexico. If you are familiar with the geography of the US, this should tell you that the type is found in almost the entire area of the continental US.

At the same time the spotted skunk also has a significant range and it covers the majority of the US and Mexico. However, this is a species which is a bit less populous in comparison to the striped skunk. Other types are even less commonly found.

Habitat of the Skunks

Now, even though they might appear a bit shy, the truth is that these small furry animals are incredibly adaptable and they can easily thrive in a range of different habitats. Of course, the only things that they need for this to happen is food as well as shelter. They rarely travel for more than 2 miles away from the dens that they have established. This is the main reason for which you won’t found dens of skunks established more than 2 miles away from a water source.

As for the dens of these black and white striped furry animals, they are usually made in hollowed out logs, brush piles, tree hollows as well as abandoned animal burrows and underneath porches of residential structures – that’s right – they can be a pest to be burdened with when it comes to it but more on skunk control later.

Even though they would most commonly prefer to dine on different insects as well as grubs, skunks are actually omnivores and they have a rich diet of both animal matter as well as plant parts. They are rather opportunistic in this particular regard and the diets that they have are oftentimes various and flexible – they adjust according to the current season. Some of the foods that they are particularly fond of include beetles, small rodents, frogs, fruits and berries, mushrooms, bird eggs, grasshoppers, grubs and worms and others of the kind. As you can see, they do like to keep it flexible and different so that everything is handled properly.

There are a few different things which are going to be discussed here, all of which are rather interesting and need the proper attention, so let’s give it a go.

Skunks are well-known nocturnal animals. For those of you who are unaware of what this stands for – they are mostly active at night. The don’t hibernate but they aren’t very active throughout the coldest months of the winter season. Throughout this time, a lot of them are likely to be found in communal dents where they gather in order to promote warmth. For the other periods of the year, skunks are known to be solitary as they live and forage on their own.

Mating season is one of the only periods of the entire year when these shy small animals tend to socialize. They have litters of 1-7 young ones in late April throughout the beginning of June.

As we mentioned above, skunks are known to have particularly strong forefeet and overly long nails. This is why they are known to be excellent diggers. They are known to dig holes in gardens, lawns, golf courses and everywhere in search for food such as earthworms, mushrooms and grubs. When they don’t find any other form of available shelter, they might even burrow underneath residential buildings, entering openings found in the foundations.

They are mostly known for the particularly noxious odors that they produce through their well-developed scent glands. This is their strongest defensive mechanism and they use it to fend off predators and other attacks. The skunk is also going to growl, fluff its fur, shake its tail and stamp the ground if threatened. After that, if the intruder or the danger doesn’t go away, this seemingly shy furry animal will lift its tail and spray the notorious odor which is capable of causing you significant issues.

All throughout the United States, Mexico and Canada, there are four well-known types of skunks. All of them have slightly different habits and appearances but they also have quite a lot in common. For instance, the majority of the adults are going to grow up to be as much as the average housecat or a smaller dog. Some of the species in the United States have special diets but the majority of them eat what is currently available and are well-known omnivores. Therefore, they eat plants, smaller animals, grubs, worms and even, at some points, even garbage. All of them, however, have well-developed scent glands as their main defensive mechanism. Now, let’s have a look at the different types of skunks there are.

It’s worth mentioning that striped skunks are the most common types of skunks throughout the entire country of the United States. However, they are more characteristic for the northern parts of the country and throughout Northern Mexico to the Northwestern areas of Canada as well. They have some particularly distinctive markings which allow us to recognize them particularly easy. Striped skunks are undoubtedly easy to spot as they have white straps which are running from the tops of their heads right to the end of their tails so they are hard to miss.

These are usually found in the eastern parts of the country. They normally live in woodlands and also in prairies. They are known to have a versatile diet of different field animals, farm crops and also wild plants. Regardless of their name, they aren’t truly speckled. Just on the contrary, they have some distinctive and easy to spot swirls made out of white stripes.

Hog-nosed skunks can be found mainly in the southwestern parts of the USA. They are also incredibly easy to find as they have stark white tails. On the other hand, there is a solid and rather large white stripe which is known to get through the entire length of their backs. They are known to have larger noses in comparison to their other relatives so that’s also one of the signs that you might want to be looking out for.

These are desert-dwelling popular mammals which are most commonly going to prefer insects for their diet. They are rather similar and they resemble striped skunks. However, they also have tails which are a lot longer and they have thicker balls of fur right around their necks, hence the name. Some different kinds of those hooded skunks are also going to have at least two white stripes which are thin and they run down throughout their entire back as well as through their tails. Others, however, are known to have just one of these stripes.

Strictly speaking, these are the most common types of skunks that you can find throughout the country of the United States. They are well-known pests that a lot of people are trying to fight off. Now, in order to make sure that you take and employ the necessary preventions or counter-measures, you need to identify the damage and to make sure that it is made by a skunks. We are going to help you out with this.

Identifying the Damage Done by a Skunk

You should know that skunks are generally notoriously known for the foul odors of their well-developed scent glands as well as for their nasty digging habits. They are most likely going to leave a lot of holes in your lawn when they dig through in their search for insects. This is capable of damaging the foundation of quite a lot of structures as it’s going to effectively loosen it up. With this in mind, it is absolutely critical for you to identify skunk damage on time and to employ the necessary precautions.

The easiest ways to actually do this is by looking at the following characteristics. Let’s have a look.

As you can see, it’s not that hard to identify damage done by those furry animals.

How to Prevent Them from Invading Your Home

Now, the best way to prevent skunks from getting in your home is through proper and effective prevention. This is, however, a lot easier said than done and there are some considerations that you need to account for. In order to do so, you need to find the best repellent for skunks.

Of course, before that, you have to identify the damage areas in order to effectively spread this repellent. It’s not that hard – you need to identify the target areas that skunks are likely to go towards. So, once you’ve found your repellent which is usually a popular branded name, you should spray the following areas:

These are the most commonly targeted areas that skunks are likely to be attracted to for a range of different reasons. For example, they oftentimes offer rich food sources or places to hide and make a den.

Skunks are also capable of carrying a lot of contagious disease as well as parasites and viruses which could easily be transmitted to both pets and humans through a bite. Some of the illnesses encompass

As you can see for yourself, the issues which could be caused by these nasty little shy furry animals are particularly significant and are not to be toyed with. You should take the pest seriously and make sure that you employ the necessary precautions or counter-measures to get rid of them.

Of course, let’s have a look at a few different facts which are rather curious as well.

As you can see, those small animals are particularly curious but they need to be dealt with properly and on time.