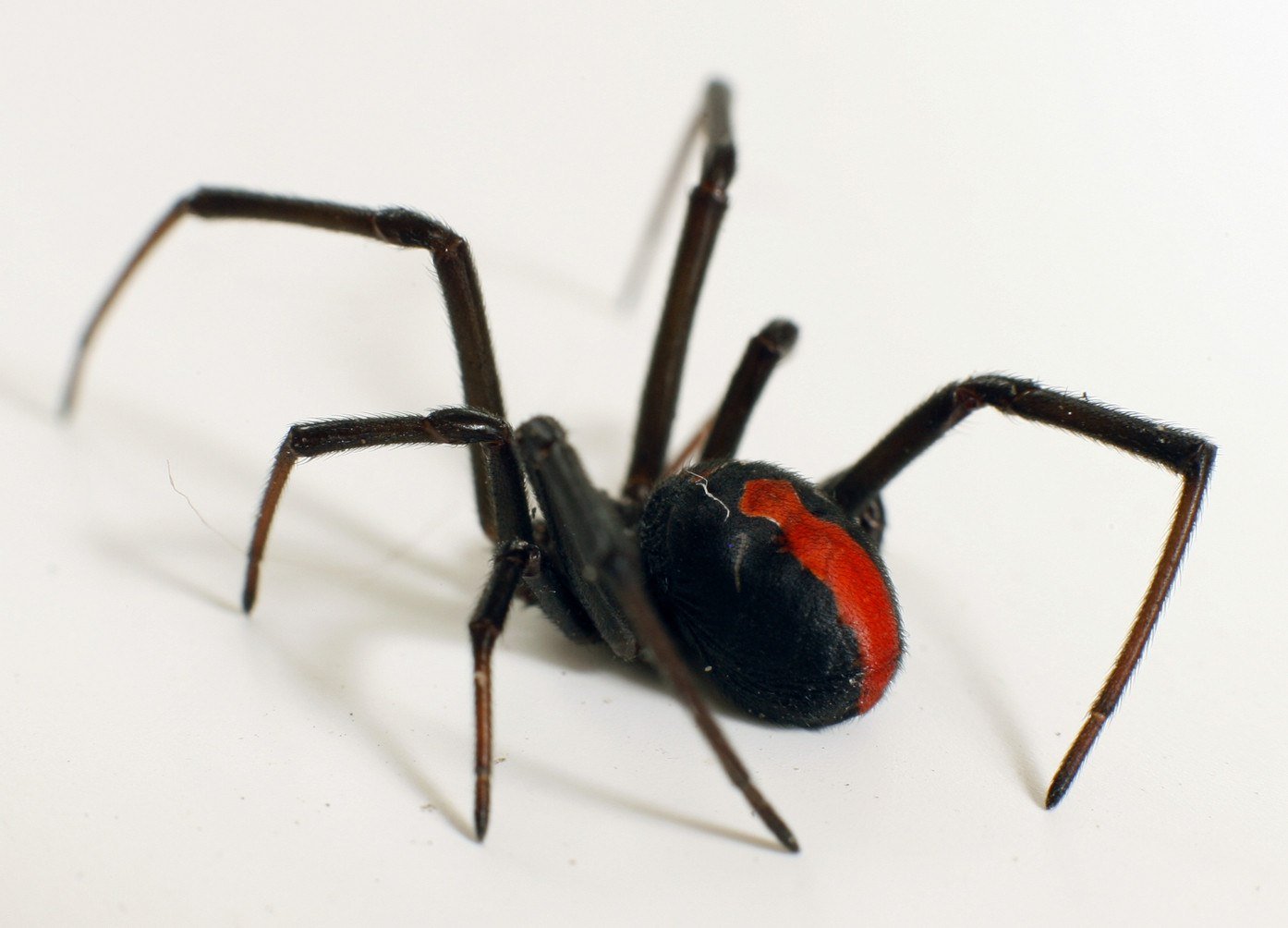 Australia is dangerous. The continent is filled with insects and animals that can kill you. The redback spider practically screams “deadly” and looks suspiciously like black widow spiders.

And this spider is known for having highly-effective venom.

Let’s learn a few neat facts about these spiders first.

Redback spiders are feared, and their high venom toxicity is to blame. You’ll be able to identify these spiders by proper spider identification – from afar.

Large in size, you’ll often find that females are much larger in size than males, and the female has:

Females are often 1 cm in length, while the males are 3 – 4 mm in length. When the females are not adults, they have a brown color with white markings. The female redback spider may be beautiful, but she can also be very deadly.

Males lack the red dorsal stripe, and they have a light brown color with additional white markings.

Nocturnal by nature, the redback spider is a creature of habit with the female staying in hiding during the day and then spinning her web at night. These spiders will remain primarily in one location their entire lives.

While the web may seem to be spun at random, it’s strategically placed to trap prey.

Catching threads are sticky and are secured to the ground to ensure that prey gets grounded if they come in contact with the web. When the weather is cooler, redback spiders tend to remain dormant, spending much less time moving around.

The web is the primary source for the spider’s food, and there have been some interesting captures in the web, too, including:

On rare occasions, there have been mice found in the redback spider’s web. When the spider knows that the prey is in the web, they’ll spray the prey with a form of silk to keep it in place and then repeatedly bite their victim’s limbs and heads. The spider will inject venom, which will breakdown the prey’s innards to allow the spider to eat it with ease.

Unlike other spiders, the victims of the redback spider are not rotated repeatedly.

If you know anything about the black widow spider, it’s probably that the females will eat the males after mating. This harsh love triangle is also seen with the redback spider. This ritual of sorts includes the female eating her male counterpart to death.

And this eating takes place when mating.

The two will mate while the female eats the male until the male spider dies from his injuries. Males will often throw their body towards the female’s mouth to help her cannibalize the male. This is called sexual cannibalism.

Females can hatch eggs as early as 8 days after mating, with babies emerging within as little as 11 days after the egg is laid.

Babies will remain in their sac for about a week, feeding on it before emerging. The mating season allows for babies to be born between September and January. Males have a short lifespan of 6 – 7 months, while females can live for 2 – 3 years.

You won’t have a spider confrontation with this species unless you’re in:

Scientists believe the spider migrated due to human intervention, and the first species of the redback spider was found in 1850.

If you’re visiting one of the regions above, you have to be careful when coming in contact with modern-day redback spiders. The redback spider specimen is responsible for more spider bites involving venom than any other spider in Australia.

There are 2,000 – 10,000 redback spider bites per year, with the females being far more aggressive than the males.

A painful bite, this species’ venom is serious and will require immediate medical attention. You’ll require an effective anti-venom, as this is one of the world’s most deadliest spiders. These spiders have two hollow fangs, and they have a high level of toxins, including:

Antivenom has been created and has been used for years.

Estimates suggest 66% of people will have significant pain and abdominal pain when bitten. But the bite is so small that it’s unlikely to cause:

Most people don’t have any signs in the bite area, but in severe cases, a person may notice:

Sometimes goosebumps will form, and the bite feels like a mild burning sensation. Proper medical attention is needed if you have this potent neurotoxic venom or nerve poison running through your veins.

One in three people will have a serious reaction to this venomous spider, with infants and the elderly being at greater risk of serious side effects.

Since these bites are far less potent than a deadly snake or even a venomous baby snake, you should be able to seek treatment before any serious side effects occur. The best form of treatment is anti-venom, but you can:

The majority of cases do not require you to seek medical attention. But if you’re positive you’ve been bitten by a redback spider, you should seek treatment if you’re pregnant, an infant is bitten, you’re elderly or you have a compromised immune system.

No deaths have been reported since 1956 since anti-venom was created. Symptoms resolve in a week and it’s very unlikely that you’ll die. There have been a total of 14 deaths associated with redback spiders in Australia since scientists have been recording the data.

Cats, on the other hand, will have side effects, and since they can easily get into dark areas, they’re at a greater risk of being bitten. Cats need anti-venom to live through these bites, and the symptoms often resolve very quickly once the treatment is administered.

Horses and camels are also very susceptible to this spider’s venom.

So, if your pet does get bitten by a redback spider, you should see a veterinarian as quickly as possible.

How to Prevent Redback Spider from Biting

The redback spider isn’t looking for a fight, and since these spiders enjoy dry habitats and live near humans, there’s a good chance you’ll see them in the wild. The good news is that these spiders aren’t aggressive in nature, so you can avoid them and hopefully never get bitten.

A few smart options to lower your risks of a redback spider bite are:

Avoidance is the best option to avoid a spider from biting you, and if you do see a redback spider and fear that you’re in danger, step on it with a shoe.

But do remember that this spider’s venom is very unlikely to kill you, so if you see one out in the wild, you’re better off leaving it alone than hunting it down to kill it.