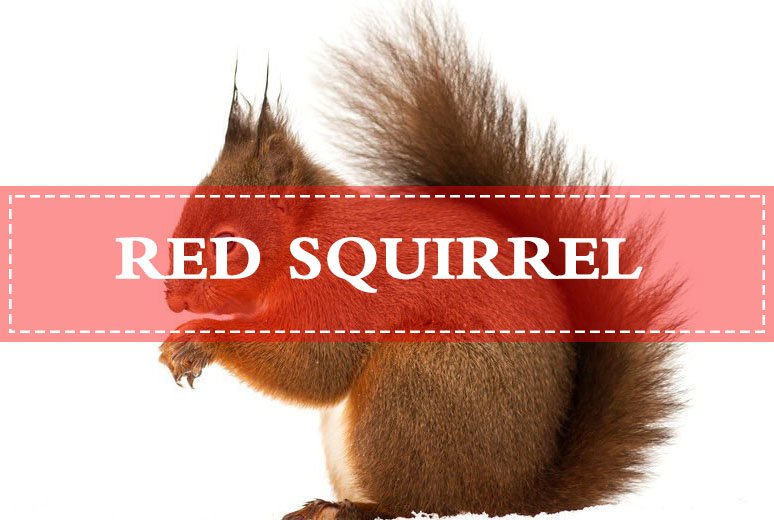 The red squirrel, also known as Sciurus vulgaris, is a type of tree squirrels which are mostly found in the forests of Europe and northern Asia. In the UK it is limited to a couple of locales because the gray squirrels threaten them. However, areas like Scotland, Ireland, England and parts of whales are shared by both the species. The red squirrel is smaller in size than the other species of tree squirrels. As the name defines, it is red in color and can be distinguished by the white ring around its eyes. Red squirrel population is also seen in the eastern part of United States. In Japan, people kept them as pets and sold on the large scale. The species is also hunted and consumed as food.

Red squirrels are fond of eating pine cones. For that, they are also known as pine squirrels. Apart from that they also eat mushrooms, fruits, flower, and insects. The red squirrel is scattered hoarder, caching of tree seeds by these squirrel has a great impact on the forest communities. Only lost seeds end up growing new trees.

13 Questions to know thy enemy

1. How is their appearance?

Red squirrels appearance is different from other squirrels species. They are smaller in size and covered with reddish fur. Their fur from the back is red and white from the lower parts or bellies with the dark colored lines. The color on their back and head varies from light red to black. Whereas, their tails are yellowish gray in color. Male and female red squirrels are exceptionally hard to differentiate.

Larger red squirrels are 16.5-23 cm long excluding tail while the weight of an adult squirrel is about 197g-282g. The length of their tail is 9-16 cm. Red squirrels shed their fur and get all new fur on their bodies twice a year, and once every year on their tail. These changes help researchers to find their ages. They have 20 to 22 teeth.

2. Where are they mostly found?

Red squirrels cover all the parts of North America and also found in the New Mexico and Rocky Mountains of Arizona. This species is limited to the dense forests, and the forested condition is meagre in the southern region. Therefore, red squirrels like to live in dark northern forests and most of their time is spent on the trees. Red squirrels are also known as American red squirrels because of the fact they love to live on the northern coast. There are more than 25 subspecies of red squirrel found in North America. Mount Graham squirrels and juvenile red squirrels are the examples of these species.

3. What are their habitat preferences?

Red squirrels are forest dwellers, and most of them live in shady northern forests where they can eat a lot of mushrooms and cones of pine trees. They build nests in the tree hollows and also store the food in it. In southern and eastern part, they are only found near mountains. The population in the Rocky Mountains can only live at the altitude of 2500 ft. They prefer to live in the areas that are cold throughout the year.

Their primary diet includes pine cones, seeds, mushrooms, bark, fungus and sapwood, hence, coniferous forest and deciduous forest is the place where they are mostly found. They are also seen in the house garden if there are trees which provide them seeds and other types of food. They migrate if the supply of food becomes short.

4. What are their breeding habits?

Reproduction of red squirrels depends on the places where they live. Female red squirrels usually give birth twice a year, but if the place is cold, they breed only once in a year. Male squirrels chase females in their territory for mating. After mating, male squirrels return to their ranges. Red squirrels can have multiple mates. The gestation period for them is 38-39 days. Females can give birth to 1-8 babies at one time. Baby squirrels have no hair when they are born, and they weigh only 7.08 g. They start getting hair on their body after 40 days. The baby squirrel takes 125 days on average to grow up and become an independent adult member of the family.

5. What is the life expectancy of red squirrels?

Due to the predation by birds and other mammals, the survival rate of the red squirrel is little. Adult squirrels can live up to 6-7 years in wild. However, they live even longer if they are in custody. Their average life expectancy is five years. Oldest red squirrel in wild had lived up to 10 years and in captivity survived for only nine years.

6. What are their behaviors?

You will find active red squirrels in the day time, during the spring and summer seasons, however, some of them are active around evening time as well. These species start gathering food in fall to store for winters, and you’ll see them remain active all the day. In the winter months, they only move out in the hours when it is warm, usually in the middle of the day. Red squirrel activities depend on the temperature in the region. They avoid moving around when the weather is extreme. Red squirrels do not hibernate.

7. How do they interact with each other?

Their excellent senses of smell, sight, and hearing enable them to communicate with each other. They often make different sounds to call each other. They make a distinctive noise as a warning call when they have to defend their territory. Body signals such as tail-jerking and foot stamping, chemical signals and different sounds like a rattling buzz, are the means to alert the other members of the tribe.

8. What are their eating habits?

The primary diet of red squirrels is seeds of conifer cones. Red squirrels clamber upon the branches of white cedar, pines, and spruces to get the seeds. Furthermore, their diet includes deciduous trees, shrubs, nuts, inner barks, and buds. Mushrooms and fungi are among the favorite dishes of the red squirrels. They also consume insect and bird’s eggs and lick the trees’ sap by peeling the bark off.

Red squirrels are scattered hoarder. They store their food by making holes in the ground or by hiding them in the tree barks which lasts for one or two seasons. They mostly choose a cold and moist place to hoard.

9. What are their predators and how do they escape?

Red squirrels have to face a range of predators. Mammals which prey on red squirrels include foxes, polecats, and household cats. Snakes, owls and large birds are also known to kill the red squirrels. Dogs also chase and catch them as their prey. In some parts of the world, humans love to eat the red squirrels, so they hunted these species to use as food and clothing.

When they see any predator nearby, they communicate the information to other squirrels by making alarm calls. They make different calls for various types of predators, for instance, the barking call is for land predators and calls with high frequency is for flying predators. They are not easy to catch because they are quick and can easily escape in the tree covers. Their behavior becomes aggressive when it comes to defending themselves.

10. How do they affect the ecosystem?

Red squirrels play a significant role in reforestation process. They do not end up eating all the stored food, some of them are forgotten or lost. These dropped seeds sprout and grow into new trees.  The fungi that are grown in the places where they store food help trees to get nutrients.

Red squirrels cause a problem if they start making their nests indoor. They can chew on the woodworks and wires, resulting in the short-circuiting the connected appliances. Fire hazards are also created by their nests when they block chimneys. Their annoying noise is also a disturbance and seldom bite people if provoked. They can also create problems in the plantation of pine trees because they almost eat all the cones and also strip the bark.

12. What is the main interaction between the red squirrel and us?

Red squirrels are being hunted by humans, and use them as a food item. The valuable fur of the red squirrel is used to make luxurious warm clothes. They are hunted on a large scale in the various region for the international fur trade. The fur is imported and exported on a large scale. Canada is one of the biggest markets in the world.

13. Are they threatened or in danger?

Red squirrels are hunted for International fur trade, and that is a significant threat to their existence.

Some fun facts about the red squirrels

How to keep red squirrels away?

Red squirrels can cause damage to your house by feeding on the trees in your garden. They also enter your house and chew the wirings and woodworks which may lead to short circuit and life hazards.

Main attraction for red squirrel are trees that provide seeds. If you want to get rid of them, trim the branches of the tree. This way you can restrict their entrance to the house. You should remove the eating items liked by red squirrels. Bird seed and food of the pets tends to invite them because these species are always in search of food. You can replace the bird food by safflowers because squirrels find them bitter. Consulting pest management professionals are also of great help.