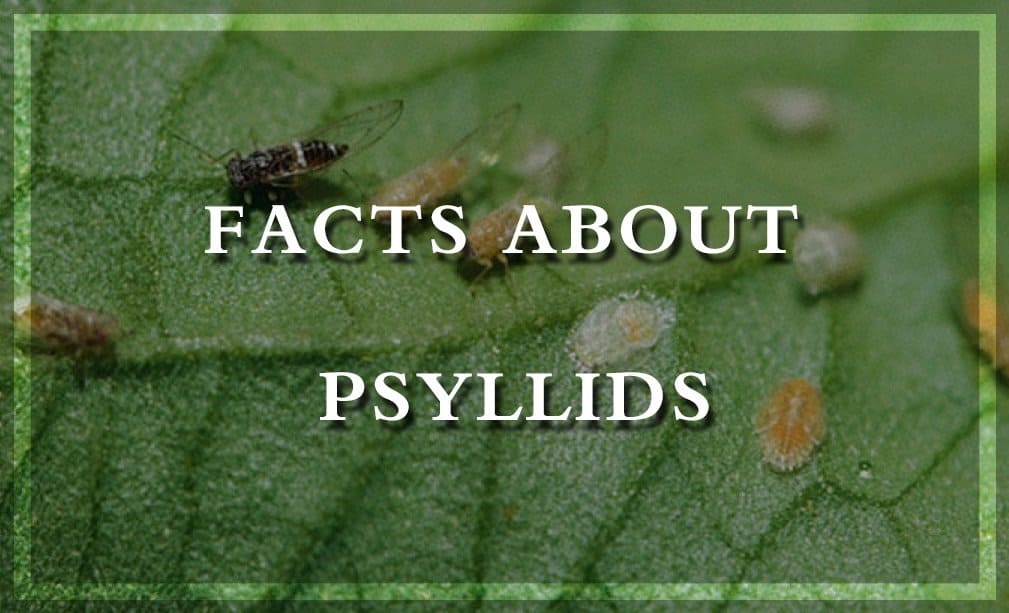 Jumping plant lice also called as psyllid is a plant-feeding insect that feeds on a variety of citrus fruits, vegetables, and leaves. There are around 100 different species of psyllids in North America. Both the adults and nymphs of this insect eat away the surface of the leaf and damage the crop. When insects feed on the tender leaf, the upper leaves turn yellow and die eventually. Moreover, the honeydew released by this insect will open a room for the mold to grow. The species of this insect transmits harmful virus and spread diseases from one plant to another and also pose a real threat to plants.

Psyllid is a tiny insect that sucks plants. The feeding preferences differ from one species to another. Majority of species feed on a single type of plants. However, there are a few species which feeds on other plants too. The size of the insect ranges from 1/10 to 1/5 inch. It appears jumping and flying in gardens. Similar to sap feeders, this insect will creep slowly to plant tissue and then move to transport tissue and squeeze the nutrient liquid that is required for plants to grow. However, not all species of the insect are harmful. When the plants are damaged due to this insect, the leaves of the plant turn discolored, loss vigor and eventually die. There are a few species which causes defoliation of buds and leaves. These insects target the young plants. Moreover, they mostly damage tomato and potato plants besides taking the aesthetic appeal of the garden.

Furthermore, this plant also attacks Lilly Pilly. These insects are so tiny that you need a microscope to see them clearly or hand lens. No matter whether the insect is an adult or juvenile, both of them cause severe damage to leaves by sucking the juices. Most of the psyllids are host specific.

Adult female psyllid will hatch eggs. There are five nymph stages for the baby psyllids to get wings like adults. The size of the adults is tiny and holds wings on their bodies. These insects causes severe damage to crops and makes farmers frustrated. Though a few species of this insect are harmless and non-invasive, many of the species damage the crops. What is psyllid? The eggs of this insect are around 0.3m. The eggs start to turn pale after laid by the adult insect and then turn yellow as they start to grow older. However, the color is orange before hatching. The nymph is of 0.25mm length, and this goes through five stages before it turns mature. After adulthood is reached, the length of this insect grows from 1/12 to 1/5 inch. The strong legs of this insect allow them to take a plunge from one plant to another.

Acacia: This is mostly found on the leaves and flower buds of an acacia tree. Though the color of adult psyllid is in brown or greenish color, they often appear dark during biting cold season. The eggs of this insect are so small that they appear in gold, green and orange colors.

If you are wondering about what you need to know about psyllid, then read on the following interesting points about psyllids.

How to Identify Psyllids?

These are tiny sap-feeding insects. The nymphs of these insects are known as suckers. These have flat bodies with sharp eyes and grow over the sides of the body. They cross through all the five nymph stages and turn as wings. Once the wings are grown, the insect gains the ability to jump and fly. This insect is witnessed in different colors. The color is based on the species. How to identify psyllid? There are a few species which also produce wax. However, when it oozes out wax, it is assumed as woolly aphid infestation. When plants are infested with these insects, it distorts and stunts the leaves, and sometimes it severely damages the stems.

Where Do You Find These Insects Often?

You can see these psyllid insects on stems, shoots, leaves, and other parts of the plant. There are different varieties of species available, and each species gets attracted to different plants. The victims of these sucking insects are pear trees, apple trees, alders, apricot, olives, rose apple, willows, etc. When these insects suck the plant juices, the color of leaves turns yellow, and it also stops the production of flowers and fruits. The majority causes aesthetic damage of trees and saplings in the garden. Also, they spread virus and diseases that are in one plant to another plant.

Many of you might have heard about lice that creep on the hair of people and cause severe itchiness. However, this is the same kind of lice but sucks the plant and is called as plant psyllids. These insects feed on particular plants. The facts about psyllid are that they suck the juices from the plants and survive. However, each species feeds on different plants. For instance, Asian citrus psyllids live on plants that belong to the Rutaceae family. In other words, it sucks the citrus plants to stay energetic. No matter whatsoever may be the plant they eat, but they still look small. The size of the insect is equal to the size of a rice grain. The color differs from one species to another. However, the common thing that you can see in all species of this psyllid insect is that all of them can fly and jump.

The life cycle of psyllid is pretty simple. This insect turns as an adult in a two to three weeks. It hatches eggs, grows young and soon turns into adults.

Adult females of this psyllid insect hatch eggs on the newly grown plants in the garden. It is important to note that these insects do not lay eggs on the plants when there are no new leaves blossomed. Moreover, the insects lay eggs in cozy weather conditions, since this is the period during which plant blossoms its new growth. This new growth is seen commonly in spring and summer. There are a few species of these sucking insects which lay eggs for every two months, and another will only lay one set of eggs. These insects lay hundreds of eggs at once. The Asian citrus psyllids lay around 800 eggs at once. These eggs are hatched up to 4 to 15 days depending on the weather conditions and species of the insect. The juveniles that emerge are called as nymphs. These nymphs go through five stages of growth and also called as “instars.” No matter whatsoever may be the stage of nymphs, but they still are called as juveniles until they turn as adults.

Psyllids on Tomato and Potato Plants

Nymphs of psyllids are detected on tomato and potato plants. While feeding on these plants, toxic saliva is produced by these insects, which are called as psyllid yellows. Moreover, the chip disease that is spread by these insects to the potato affects its production big time. This insect cause infestation on other plants like eggplant and pepper, but the damage caused to these plants are negligible.

The symptoms on potato and tomato plants show slight discoloration on the edges of the leaves, and this eventually curls upward. Over time, the color of the leaves changes either to yellowish green or purple-red. The plant leaves turn small and stand upright, giving a feather kind of look. If tomato plants are prone to infestation, it causes severe damage to its fruits. However, if tomato plants are attacked by this sucking insect later, then the fruits grow, but the size of the fruit is abnormal, and the quality is poor. This insect while attacking the potato in the initial stage of its growth forms tubers. On the other hand, if the attack happens after tuber, then the growth stops, and the shape of the potatoes becomes irregular.

Few tips to manage psyllids in tomato and potato plants-

The damages that are caused by different parts of plants due to this insect include:

Flowers: Adult and nymph psyllids will reduce the number of flowers when they suck the juices of the flowers.

Fruits: When the infestation spread to the fruits, it results in a drop of fruits or fruit pitting. In addition, the honeydew produced by the nymph of this insect forms wax on the fruit and result in the growth of mold. The fruits on which this insect has crept and turn black, moldy and rotten. The number of fruits produced by the plant is also reduced with the increase in the infestation.

Leaves: Honeydew produced by hemipterans coats leaves and stop them to inhale photosynthesis, thus weakening the growth of leaves. The leaves that are infested by the insects recently turns yellow and drops after a few days. While sucking the juices on leaves, these insects leave harmful toxins which turn a yellow spot on the leaves.

Roots: Adult and nymph psyllids also feed on the roots of the plant and eats away the nutrients that are required for the plant to grow healthy.

Twigs: When the infestation is spread to the twigs of the tree, the limbs and twigs will die soon.