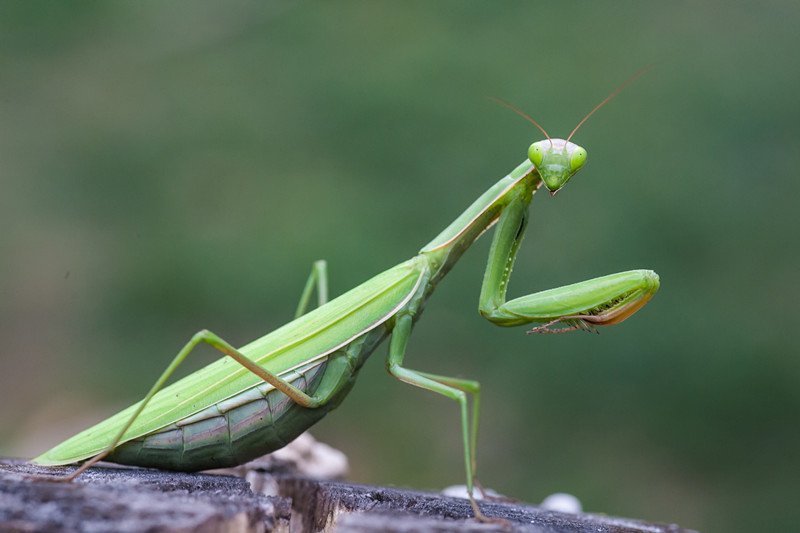 When we talk of larger group of insects, ‘praying mantis’ or Mantodea tops the list. Word Mantis is derived from the Greek word ‘Mentikos’, that means prophet. Mantises are intriguing insects, quite different from the other common pests. Everything about mantises is unique and interesting. Mantises have been living on this planet since ages. All through this time, they have evolved a lot in structure and look. The earlier fossils mantids were quite different from modern-day mantids. Read on to find more about these big-sized critters.

Praying mantises are closely related to cockroaches and termites. There are about 1500 to 2000 different species of mantis worldwide. About 18 species belong to North American Continent. The most common of these may include—European mantis, Chinese mantis and Carolina mantis. Bigger in size, it can be 1 to 6-inch long. But the length may vary with each specie.  Its appearance is the most fascinating thing about it. Unlike others of its kind, mantis has a segmented body. Its head comes in a triangular shape with two antennas over it, followed by thorax and a long torso. It has one ear on its belly.

Praying mantis has five eyes (a rare feature), two large compound eyes on the sides of head and three tiny eyes between them. Those bulging compound eyes are exceptional not because of their shape and size but also for the binocular vision they have. A praying mantis can easily view any movement at a distance of about 60 feet. The three smaller eyes are used for detecting any source of light.

Most of them are green in color but there are some in different hues of brown and pink. Mantises are carnivorous pests that usually eat insects like crickets, flies, grasshoppers, caterpillars and moth. But if they get the opportunity, they would never spare the bigger creatures like— lizards, frogs and small birds (humming bird). Their six legs (especially the prominent front legs) are the best support in catching the prey.

Both, male and female praying mantises have wings but only males can fly (some male species are flightless). Mantises are usually found in the areas filled with greenery, twigs and food (insects). Their natural habitat are the tropical and subtropical latitudes. They may survive in benign to extreme temperatures. Mantis’s mating season starts in autumn and the eggs are hatched in spring. The life span of a praying mantis is no longer than a year. It may vary with each specie.

There are so many amazing facts related to these fascinating insects. Read on to take the mystery out of these bugs by knowing some lesser known facts about mantis.

1. Why it was Named ‘Praying Mantis’?

Mantodia were named ‘praying mantis’ because of their unusual way to clasp their forelegs (raptorial legs) together (it’s like a praying position). While standing in their eerie stillness, mantises usually wait for their prey. And as the poor prey passes, a mantis grasps the insect with those front legs, already shaped in a praying position (who knows a mantis prays to God for his success in capturing the prey?).

2. They can Rotate their Heads 180 Degrees

That is a rare body feature for any pest. Praying mantises come with a rare and flexible muscle located between their head and prothorax. With its help, mantises can turn their triangular heads freely (180 degrees), without moving their body. They can see in all three directions (that is why they are considered human-like insects).

Praying mantises are ambush predators that prefer to have a live pray. To have an insect, mantis camouflage itself in different backgrounds by staying motionless. Unlike the common grasshopper type pests, a praying mantis preys in a ruthless and deadly manner. Its forelegs have outnumbered spines to help it in grabbing the insect firmly. Before chewing its prey with strong mouth parts, a mantis paralyzes its victim by biting on the back of its neck.

Yet another creepy trait of mantis is its notorious mating behavior. Not just males, female mantises too are deadly buggers. While mating or after copulation, a female mantis can munch on her sex partner. In most of the cases, the female beheads the adult mantis. There could be a few possible reasons behind devouring her own partner—to fulfil her strong craving for food or to “increases male investment in offspring.” Some even say, devouring male’s body helps in a quick ejaculation. But all of these are just theories forwarded by the scientists. Sexual cannibalization does not happen always (5 to 30% out of 100 times approx..). Some experts suggest that cannibalization is more common in laboratory’s pests as compared to the ones in the wild.

Note: This cannibalistic attitude starts as early as they are born. Many times, as the eggs hatch, the nymphs start eating their own siblings.

Female mentids can lay about 100 to 400 eggs in one time. It picks some twig or branch of the tree to lay eggs. As the eggs are laid, female mantis secretes a Styrofoam-like substance from its abdominal glands. This frothy substance is called ootheca. Ootheca works as an egg case or a capsule that keeps eggs protected from cold weather. The most likely places to have this egg case are—plants with strong upright stems, raspberry and blackberry stems. The eggs remain inside till they are developed completely (4 to 6 weeks for larger mantis and 3 to 4 weeks for the smaller ones). The eggs are hatched in spring. And hundreds of nymphs (miniature adults) are born. Nymphs are wingless and grow by molting their exoskeleton (nymphs molt about 5 to 10 times before turning in to an adult mantis). If the female mantis is still around them, she might eat her own nymphs.

It’s yet another sensational fact about mantids. Found in a number of tones, their coloring body allows them to blend themselves in different environments. There are two basic reasons of camouflaging—to lure the prey and for self-defense. There are species that can mimic natural elements like flowers or dry leaves to lure insects. The best examples of camouflage mantids are ‘orchid mentis’ (with petals-like structure and little green rim, it imitates an orchid to stalk butterflies and other bugs) and ghost mantis (colored like a dead and decayed leaf, it sticks with dry branches and dry leaves and stand still for capturing the prey).

7. An Unusual Way to Defend itself

Praying mantises know how to bluff their predators. Instead of getting intimidated, they would stand tall on their hind legs to face the danger. To deceive their predators, a mantis fans out its wings wildly. It does so, to make itself look bigger and stronger. There are some who produce a hissing or loud high pitched sound to frighten the attacker. Even if that does not work, they might attack or bite the predator, irrespective of its size. The most common mantis predators are—bats, frogs, monkeys, larger birds, snakes and owls. 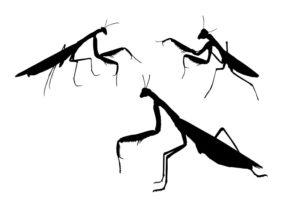 The relation of praying mantises with human civilization is age old. We have heard their references in the history of ancient Greece, Assyria and ancient Egypt. All of these civilizations believed mantises to have some supernatural powers. Let’s read on to find what different cultures have to say about mantises.

In French folklore, a mantis is considered a guide with great intuition. According to it, a child who loses his way, should follow a mantis. Following it would safely get him back to his home.

In African mythology, mantises (and other bugs) were given a god-like position. Besides that, Africans were of the belief that if a praying mantis lands on someone, it brings good luck for that person.

According to the ancient dictionary of china, titled ‘Erya’, a mantis is a symbol of courage and fearlessness. In Chinese folklore, roasted praying mantis eggs were the best cure for bed wetting in kids and thyroid enlargement. Furthermore, Chinese Kung Fu has two fighting strategies or martial art steps, that are purely inspired from a praying mantis’s posture.

The unusual eating habits of a praying mantis are enough to declare it a pest. Mantises are not selective eaters and can devour any bug or insect (spiders, pollinators, bees, flies and butterflies) that crosses its way. This capacity to ingest any insect is used to control several other crop damaging pests and bugs. Simply put, a praying mantis can be used as a pesticide.

Praying Mantis as a Cure for other Pests

Mantis is considered great beneficial insect for its role in ecosystem. The chemical pesticides that are used to kill insect pests are toxic and may cause a huge problem for humans and their environment. Contrary to that, using mantis is a perfect non-toxic way to get rid of these pests. That is the reason why a vast majority of organic gardeners and farmers are using mantises as pesticides these days. Though mantises are insects but they do not harm plants and crops. So, it is quite safe to try this option for controlling pests. The only side effect of using mentids as pesticide is their inability to differentiate between good or bad (for your crops) insects. They would eat whatever comes in their way.

Note: Before using mantids for your crops or garden, don’t forget to check your state’s laws about ecological role of mantis. Go ahead only, if it is declared a legal activity.

How to Get Rid of them in the House?

Using mantis as a contributor in the ecosystem is fine. But there might come a stage where these mantises intrude in your house. Here is what you should do to get rid of them.

Praying Mantises Eggs and their Use

Praying mantis can be used for protecting your crops and plants, as spraying insect repellent is not a healthy option. To get these natural pesticides, you would need some eggs cases i.e. ootheca. An easier option is to buy them online. The best time for buying eggs online is winter or early spring. In case you are not interested in that, looking for ootheca in the natural surroundings is yet another useful option. For that, we have already mentioned the areas (roadside ditch, overgrown greenry) where you are more likely to find them.

Do not hunt for egg cases more than your requirement. Hatching so many mantises around you might cause trouble. Once you have brought them in their new place (be it the crops or your home’s garden), attach them with some twig, using a string. You can also place them openly among bushes or shrubs. Exposed to heat, these eggs will hatch in the end of spring. Here are some useful tips to ensure that everything goes according to your plans;

These fascinating insects have so many intriguing and amazing facts associated with them. From the moment when a mantis lays case filled with eggs to the time when an adult mantis gets devoured by a female mantis, everything seems baffling. If you still feel curious to know more about them, have them as your pet. Seriously, they can be really obedient as pets.