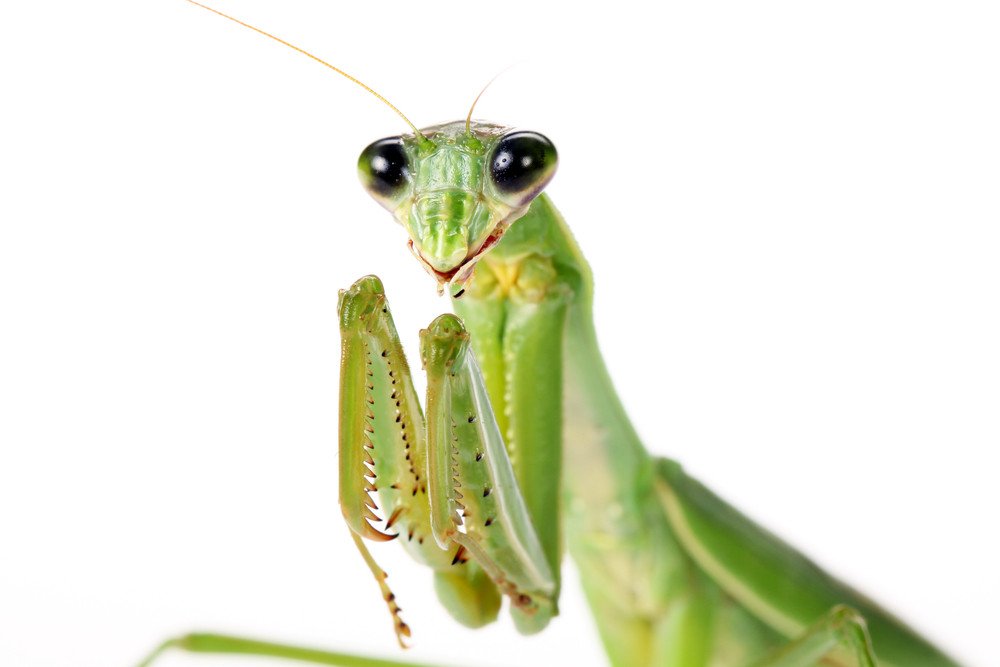 Praying mantis is a fascinating bugger that belongs to the larger group of insects. One of the ancient critters, praying mantises have got recognition because of their “raptorial legs”. Though a mantis comes with six legs but its front legs make it one of the deadliest insects on the planet. Whenever it senses any danger or it is about to ambush its live prey, it stands still in an eerie posture, that involves its front legs in a ‘praying position’. That is the reason why a mantis is named as ‘praying mantis’. But actually it is not praying, it’s ‘preying position’. Read on to know more about this fierce predator and its ways to bite.

Do praying mantises bite or sting? 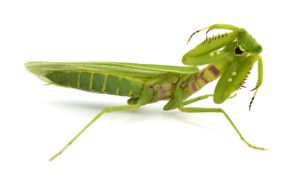 People often ask this question whether praying mantis bites its pray or does it sting. The first thing to know is that a praying mantis is a non-aggressive carnivorous insect. Uninterested in humans, mantises have no known venomous species discovered so far. But it displays the deadliest behavior, when it stalks its prey or when it is attacked or provoked by any predator (including human). Praying mantis is not poisonous neither it has any stingers. Most interestingly, it uses its forelegs’ spikes to protect itself. The prominent forelegs are lined with outnumbered sharp spines to aid it in griping its prey item tightly. These needle-like spines are enough to get pierced in the skin. If something like that happens to you, simply wash the skin with soap and apply some first aid ointment on the affected area.

Though harmless to humans, they can still bite them (biting varies with each specie). And the bite can be a hard one. Humans need these critters as pesticides for their crops, in laboratories for learning, or even as pets. Many times it becomes the need of the hour to pick them up. If you don’t follow the right technique (pick them from behind, so they can’t reach out for your hand), they are quite likely to bite you. A praying mantis may attack you under some specific conditions. These may include;

1. When it’s a large-sized mantis

Every specie of praying mantis may differ in size. The maximum size of a praying mantis could be around 6 inches long. If you provoke any of the big-sized praying mantis (African mantis, Asian mantis European mantis), it is surely going to fight back (smaller mantises don’t react). They have a very unique way to come in attack mode. They stand tall on their hind legs and start fanning out their large wings. This is their way to show their strength and fearlessness. Some species are known for producing a loud hissing sound to intimidate the predator. If the danger persists, they may bite you, no matter how big you are. If you ever face a situation like this, it is best to leave the praying mantis for a while.

2. When it considers your finger a prey item 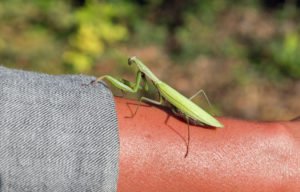 In case, you try to tackle them from their front side, they would definitely take your finger as some danger. To protect itself, it would try to take hold of your finger in its front legs. Even if it succeeds in griping your finger, it cannot harm your hand excessively, as humans have a thicker skin as compared to the tiny insects, they ingest normally. To avoid any damage to your skin, you are advised to wear thick gloves on your hands while tackling it.

Dog owners must have seen their dogs in a fighting mode against some tiny bugger at some point of time (Even dogs feel curious about these strangely moving creatures). A mantis confronts the dog fearlessly (just the way it faces any other predator) and even bites it, when angry. People often ask us the questions—Is mantis bite toxic for dogs? How to deal with a mantis bite on dog?  A praying mantis bite is not venomous at all. The least a dog may suffer is gastrointestinal irritation because of the razor-sharp spikes on mantis’s front legs. To deal with it, add fiber in dog’s diet. It may help in draining out the bulking agents.

Praying mantises are known to be voracious hunters who love eating their prey alive. Female mantis is one step ahead. Females come with deadliest cannibalistic tendencies that lead them to behead and devour their male partner before or after mating or courtship. This act is referred as ‘sexual cannibalism’. Firstly, the seductress she-mantis tries to seduce the he-mantis with her pheromones. As the male approaches and mating begins, she chews off his head. There are various explanations forwarded by scientists about this weird phenomenon. Some say, unfed females take their males as easy meals and munch on their head (and then the whole body), while to some, eating a male’s head increases the duration of copulation (he-mantis in pain, thrusts more aggressively). Some link it to the gaining of nutritional value of male’s body. According to a common concept, female who bites off a male’s head (and body), lays more eggs. But the important point to remember is, the occurrence of this post-coitus attitude is quite rare (less than 30% females do that). The overall ratio is higher among the mantises used in labs as compared to the ones in the wild. 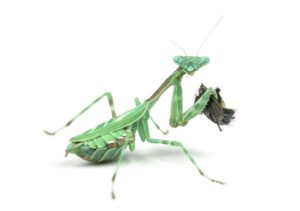 Praying mantis as pets are getting quite common these days. Even pet stores are selling these insects nowadays. Besides that, you can find them in the wild or simply get an egg case from a gardening center or the one sticking to the twig or grapevines in the wild. Watching the hatching of eggs or the way they molt to grow, all promises a unique learning experience. Whatever way you choose to acquire them, keeping them as pets requires you to follow certain basic steps. These may include:

1. A container for mantis

Place it inside a container with a lid. It must have holes (smaller than mantis’s size) to make a mantis breath properly. The box should not be too big or too small.

Place a couple of plants in the box to make them feel like their natural habitat. It would be better if the plant matches the mantis’s color (to camouflage itself).

Praying mantises belong to humid and temperate environment. To recreate that toasty and heated environment is essential for their wellbeing, especially in colder months of winter (not in summer). To do that, opting for some artificial ways like low powered heat pads or room heaters are the most affordable options.

As mantis feed exclusively on insects, you would have to arrange their natural food items like pinhead crickets and small flies.

Just like us, praying mantis too needs water. To fulfil its requirement, use a spraying bottle to spray water in the container. Once in a day would be sufficient.