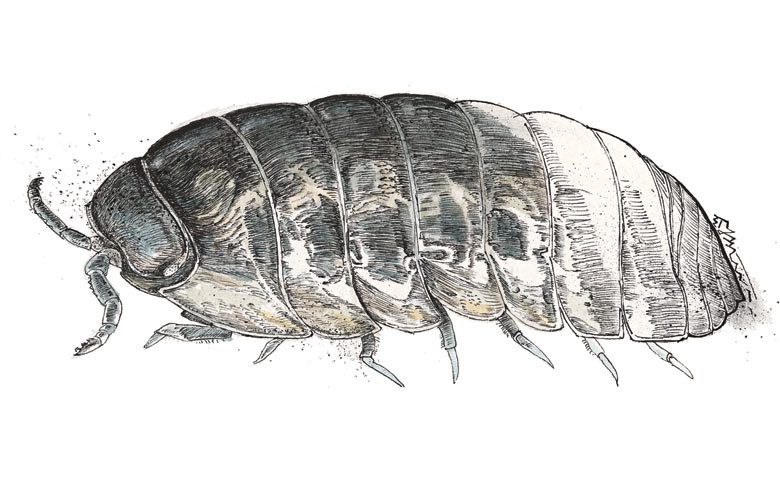 Pill bugs belong to terrestrial crustacean group and have been placed in the order Isopoda. The name of their class is Crustacea. Pill bugs are crustaceans rather than an insect. Crustaceans are animals which contain hard shells partitioned into many pieces. Few other crustaceans of its class include shrimp, crabs, and water fleas or daphnia. Pill bugs are also sometimes known as Rolly Polly because of their unique feature. Here, in this article, we will discuss primary details about pill bugs regarding their appearance, reproduction, habitats, and other fascinating facts.

The most prominent feature of pill bug is the presence of hard shell at their back. This shell looks a bit different with a flat and round-backed surface. Their shells are partitioned neatly into small segments and oval in shape. The shape of their backs make convex at the top and concave from the bottom. They further contain a pair of seven legs and two pairs of antennas that are shaped to make a sharp angle. Among both pairs of antennas, only one pair is usually visible. Their head is quite broad and possesses four mouthparts pair. Their main body segments contain limbs and the parts at rear side that are smaller than those present at the front, contain pleon. The section containing pleon also possess limbs, but they are present in the modified form. Top five pairs are pleopods, and they are bit flat and make set of gills that are overlapping and visible from the bottom of the animal. Their primary functioning includes excretion, reproduction, and gas exchange. The color of their bodies ranges from dark to light gray. Pill bugs are a small-sized creature, and their body size may vary from quarter to half of an inch.

The primary diet of pill bugs or roly-poly includes decaying plants, animals and fungi. Thus by consuming such food, they play a very crucial role in maintaining a balance of our ecosystem. They speed up the decaying process of rotten vegetations and resulting in a clean atmosphere. However, sometimes they may also consume fresh plants and their sensitive growing parts like seeds and roots.

Pill bugs are nocturnal in nature and stay hidden inside different objects during the daytime. They become active at night and go to search their food. Another significant and unique behavior that these insects show is their rolling habit known as conglobation. Usually, when they are frightened, they tend to roll their bodies up into a ball shape and protect their inside bodies. This behavior also helps them in preventing water loss inside their bodies as water is imperative for them. They cannot survive at scorching atmosphere, and this is the reason they come out at night when the temperature is considerably low. They usually live together in a group. They cannot walk in a straight line. When they walk, they usually take slightly left, and right turns alternatively.

The reproduction process of pill bugs usually occurs during spring. They find their partner just a few days before female pill bug is ready for coupling. Pill bugs can mate at any time of their lives, and they do not keep one partner for the whole breeding season. Female pill bug can mate with multiple pill bugs at one breeding season. Usually, pill bugs can reproduce three times in a year. Female rollie pollie does not lay eggs at once; rather they keep them inside her pouch for two to three months. The pouch is known as marsupium. Eggs hatch inside marsupium and female still keep them inside the pouch for more 3 to 4 days. After emerging from the pouch, baby ill bugs undergo few molts and then they are considered independent of their mother.

The common and most favorite habitat of pill bugs is fields, gardens, forests and other rural or urban areas. The most important things that they need for their survival are moisture and moderate temperature. Therefore, they usually prefer such areas containing a small amount of light, enough humidity, and moderate temperature. They can be found buried under logs, rocks or soil. Pill bugs can be found all around the globe except the continent Antarctica.

Besides basic details and facts about pill bugs, there are few more fascinating facts and truth about them that you would like to know. Top 10 fascinating pill bugs facts are given below:

Typically, pill bugs are not dangerous or poisonous. They are almost harmless. However, the problem occurs when they start living in your locality and increase their population tremendously inside your area. However, that too happens rarely and only in those cases when inside of your building contains enough moist, mulch and decaying plants.

How to Get Rid of Pill Bugs

Reducing moisture and humidity from your area is the best thing that can be done to get rid of not pill bugs only but many other insects as well. As moisture is the most critical component of their survival, therefore, reducing humidity level of your home can help in controlling pill bugs.

Pill bugs usually enter the home from some broken or cracked doors, walls, and other small openings. Therefore, make sure to seal all entrance points of pill bugs to control them from entering your area.

Leaked faucets and water pipes are a great source of providing entrance to many different kinds of insects and pill bugs as well. Therefore, while removing insects from your home, your first step should involve repairing broken and leaked water pipes and faucets.

5. Vacuum or Use Glue Traps

To remove already entered pill bugs from your home, use a vacuum or create glue traps to catch these pill bugs and throw them out of your home.

Monterey Sluggo Plus is a synthetic product available in the market that can help in getting rid of pill bugs. This product contains some attractants for these insects, and they mistook this chemical for their food. It is easy to use and reliable method to kill pill bugs.

The product can be spread around any area infested with pill bugs. It will attract insects towards itself, and when they consume it, this chemical will kill them.

The product is easy to apply outside the door like in gardens. It has the power to kill insects within 24 hours time after activation.

To use Buyer Advanced 24 Hours Grub Killer, spread the product in your garden and activate it through watering it. On contacting with pill bugs, it will kill them.

Taurus SC 20oz product is readily available on the market, and it can be used to kill a wide variety of insects other than pill bugs.

Mix 0.8 ounces of Taurus SC 20oz in a gallon of water and apply it on affected areas. You should use the product for outside purpose only while getting rid of pill bugs.

Pill bugs are unique harmless animals and usually don’t intervene with other humans. However, in a case of encountering pill bugs inside the locality, you should take immediate action to remove them. Otherwise, they may reproduce their whole population inside your area.