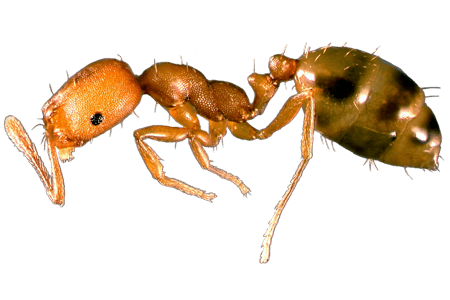 Monomorium pharaonic is a transparent ant. Pharaoh ants are also famous as “sugar ants” or “piss ants.” This ant is a huge indoor irritant pest and is especially seen in hospitals. These ant origins are undetected and are introduced to all parts of the earth. These include Australasia, Southeast Asia, America and Europe.

These species are polygynous, which means that every colony has many queens which create colony dynamics and unique cast interactions, thus allowing the group to shred into colonies quickly. The colonies are not aggressive towards each other. It is also called unicoloniality.

This ant is also observable for its foraging system. It involves entangled trail paths sustained with pheromones. 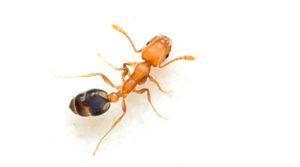 The ants are about 0.0625 inches or 2mm in length. These species are yellow, reddish brown or light brown in the shade with dark markings on the abdomen. They look similar to thief ants, but Pharaoh ants have three segments in the antenna section. Since these ants are minuscule, they can trail and travel to many places. There two nodes on the petiole and its thorax have no spines. On average pharaoh ants possess 32 ommatidia as they have poor eyesight. These ants are found almost everywhere on the earth. It is one of the major pests in the Europe, United States, and Australia.

Males and females may be winged, but don’t worry: they cannot sustain flight.

The queen lays around thousands of eggs during her entire life. She usually lays ten to twelve eggs per set and 4-7 after every batch. Eggs hatches in five to seven days if the temperature is 27°C and 80% relative humidity. 18-19 Days are the larval days; three days are for the pre-pupae and pupal tenure is nine days. Four further days are obligatory to determine its male and female forms. From its egg form to its mature form it takes nearly 35 to 50 days, relying on the relative humidity and temperature. Unlike most any species, the pharaoh ant breeds the entire year and prefers to mate in warm areas. The mating takes place inside the nest every time. Larger and mature colonies have several queens, males, eggs, workers, pupae, pre-pupae and larvae. The Queen lives as long as 39 weeks and lays around 400 eggs in her lifetime. Workers last only ten weeks.

If you see a winged ant, it is a reproductive female or male. The wings do not allow for sustained flight.

New queens may mate with one or several male ants, and that is all that she needs to mate with her entire life. She will store the sperm for the entirety of her life, using her stores to fertilize her eggs.

When colonies grow to be too large, the “budding” process will begin. Budding is the process of new colonies being formed. During this process, a group of the colony will leave to start a new colony.

One of the many queens will come along to help the new colony grow. The brood may also provide a stock or new males and queens.

Budding can be caused via insecticides, or if the colony comes under stress due to temperature changes, lack of food or lack of water.

Pharaoh ants handle three main kinds of pheromones. The first chemical is durable and attractive, and a trail system is built with it. If the ant’s path is not used for some days, they remain detectable. These ants begin their daily work around 9 am and shut all activities at night. The succeeding pheromone is attractive as well. However, they decay to a microscopic amount in a few minutes if not replicated. This particular pheromone is helpful in making food sources. Individuals do not waste time on unprofitable trail routes. The last pheromone in the kind is known as a repellent. If an ant locates any serious danger, it releases the repellent that warns others and causes them to search somewhere else.

After a new food source is discovered, the repellant pheromone is used in changing of the trails. It helps the insects from examining on undesirable pathways. 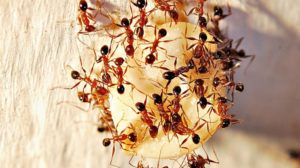 The ants use distinct trail network and are constant every day, even though they search independently. Each system has trunk routes varying from 1 to 4 and one of the trunks is used by a scout from start to end in search of food. Thus the trunks become reinforced with the chemical and are not altered. The trunks further have divided branches depending on the food availability.

Upon the scout’s return, the queen will try to beg for her part, but that depends on the availability of the food the scout sometimes refuse to the queen’s imprecation and even flee from her. The accord of sacrificing foodstuff to the queen might result beneficial as queen will be healthy and will be able to reproduce and populate. However, if food is scarce, this possible benefit will be outweighed by the individual’s survival. Thus she will be rejected to offer the food. The queen also feeds on the secretions of the larvae.

The queen rears her first group of workers when she moves to a new nest. When a worker threshold has been reached, resources will be invested into new males and queens. After finding a suitable nest site, workers build a nest and can raise new queens. In Pharaoh ant colonies new queens are raised when existing fertile queen is removed. In the absence of the queen, the workers can do only two things either rear the existing sexual larvae or transport the existing sexual larvae from the main nest to its own nest. However when fertile queens are present in the nest, the worker ants will cannibalize the larva, they will either reject or consume sexual larvae from other nests. Worker larvae always accept and nurture workers larvae from other nests. 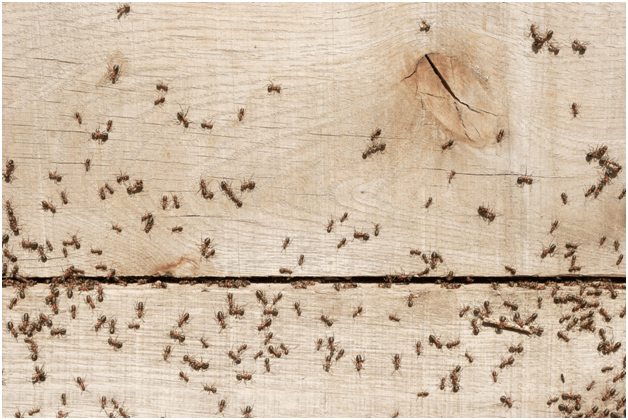 Pharaoh ants that nest in wooden structures cause significant and costly damage to the wood. They also cause damage to the foam insulation. Pharaoh ants do not sting, but they bite. Though the ant’s bites are not poisonous, they can cause pain and transmit diseases. These pests can contaminate food, sterile equipment and even wounds in the flesh. These ants can be found in sealed sterile dressing, medical equipment and even patient wounds in hospitals. These insects feed in places like drains; refuse bins etc. that result unhygienic. Their ability to infest sterile supplies in hospitals is of particular concern.

These species of ants are known to spread organisms like Clostridium and Streptococcus. They transmit Clostridium that could cause tetanus, botulism, or necrotizing intestinal tissue.

Keeping the house as clean as possible can prevent Pharaoh ants. Keeping the kitchen clean will prevent these pests from contaminating the food. The kitchen counters and the floor should be free of crumbs or sugar crystals. The food shall not be left open and remains shall be kept in airtight jars so these tiny ants may not enter. The plants should not be huge, and the trees should be kept trimmed to prevent these ants. The firewood shall not be held anywhere near the house or in the house as they attract these ants and keeping them will result in an invitation to these ants. This firewood shall be kept at least 20 meters away from the house. The real challenge is to find a natural ant killer. Experts use the direct method in which pesticides are directly applied on the ants.

How to Get Rid of Pharaoh Ants

Sprays are not the best option for getting rid of pharaoh ants. Since these ants are quick to recolonize, they will often split into multiple sub colonies, causing a bigger infestation in the process.

Sprays actually cause the budding process to begin, so it’s best to use bait which is slow-acting.

You can use sprays for a direct kill, but the best form of spray is a repellent spray which will not force the budding process.

Baiting is preferred over residual spraying in such cases when the repellant spray is unavailable. To eliminate the entire colony baiting is the best item to use. It is best to choose from sugar-based baits and protein based baits. Pharaoh ants can suddenly appear in various places, so baiting is recommended for inside use. Baiting is the method to get rid of pharaoh ants by placing poisoned baits in strategic locations. The advantage here is that workers bring poisoned food for the queen and she will die after eating it. However, the only disadvantage here is that results are not immediate.

When using baits, slow killing baits shall be used as quick kill baits only kill foraging ants and the poisoned food does not reach the nest. There are plenty of kits are available in the market, but Advion Ant Bait Kit is highly recommended. It contains Advion Ant Bait Arena, Ant Bait Gel, Advance375 Ant Bait and inside Ant Bait Kit.

Sprinkle DE on the ant mound or make a circle around the ant mound so that the ants have no other option but to crawl through the DE.

When they do, DE will compromise the exoskeleton, causing the ants to start drying out from the inside out. The outer layer of the body will be pierced, allowing for internal water balance to be disrupted.

Ants must come in contact with DE to die.

You can also mix DE with an attractant. Ants like sweets, and sugar is one sweet that can be mixed with DE to make it even more appealing to ants. You can add in 25% of sugar to 100% DE, or add more sugar as needed.

DE is also effective at killing other ant species and insects.

Pharaoh ants are a difficult species of ant to kill off or repel due to their multiple queens and their ability to split into multiple colonies. Indoor heating is ideal for this species, so they will nest inside of homes or buildings where it’s much warmer than the outdoors.

If you want to get rid of pharaoh ants permanently, you’ll want to call on either a professional exterminator or use ant bait. You need to be very strategic with your baiting. Place bait in multiple locations and replace the bait often in hopes that you’ll kill a colony before the breeding process begins. Otherwise, you may kill off one colony, but multiple sub colonies may form in the process.

When nests are made in wooden structures, the ants can cause significant structural damage and also damage any foam insulation.