Paper wasps are the kind of wasps that collect the fibers from dead plant stems and wood and mix it with saliva which they use to construct the nests. These nests are water-resistant in nature. They form nests made up of brown or gray papery material. Paper wasps are also known as umbrella wasps because their nests resemble the umbrella. 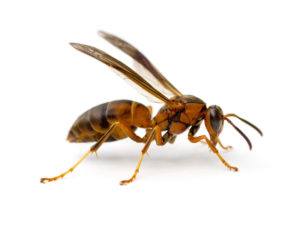 Paper wasps have long legs and slender bodies which hang underneath them during the flight. Adult paper wasps grow around 18-20mm or 2-3.2 cm in length. They tend to have yellowish markings with brown color however some do have red markings. Their appearance varies slightly according to the species. Paper wasps possess distinctive long legs which can be easily identified unlike yellow jackets and bees have short legs. The striping pattern on paper wasps differs according to the region. Most paper wasps have dark brown or black bodies along with yellow markings, but variations may occur in color.

Paper wasps feed on insects, and they do not like to poke their nose in other’s business until and unless they are disturbed. If you do not bother them and simply walk around, they will not sting you, but if you disturb them, they will swarm on you and severely hurt you. Paper wasps are larger and differ in behavior from the yellow jackets. Paper wasps feed on nectar and feed their larvae on small insects such as Caterpillar. Paper wasps are beneficial regarding assisting pollination and controlling the pest populations. Although they are beneficial, they should not be allowed near or outside the homes as they sting powerfully.

Paper wasps construct their nests with a paper-like material almost like an artwork which is a finely chewed mixture of salivary secretions and wooden fragments. Paper wasps usually build their nests under ledges or eaves, or protective overhangs such as door frames and their nests are umbrella-shaped or semi-spherical with an assembly of tiny cubbies. Occasionally paper wasps do build nests within the bushes to provide shelter from wind or rain. Paper wasp’s nest comprises of numerous compartments where wasps lay eggs and nurture their new ones. The nest lacks the outer shell so that the cells within the nest are not visible. These nests resemble the umbrella that’s why known as umbrella wasps. The nests consist of 10-30 wasps with the larger nests consisting around 50-60 wasps.

As the larvae transform into adults, they help in expanding the nests and rearing the new ones. Paper wasps lay eggs individually within the cells. The eggs hatch into larvae which are legless and transform into numerous stages to form an adult paper wasp. Cells of the nest remain open till the time larvae pupate. The adult wasps feed the larvae with a caterpillar and small insects until they pupate. Worker nests help in nest building defends the nest and feeds the young ones. During the late summers, the queen wasps stop laying eggs and the colony begins to decline. In the fall, females move around and search for over-wintering sites while the rest of the colony dies off. 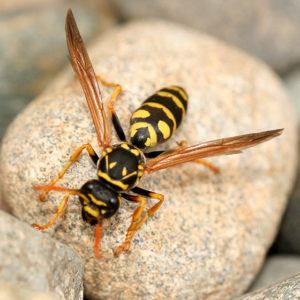 22 to 23 species of paper wasps are found in North America and around 300 species worldwide. The most common type of paper wasp is identified in Europe that is the Polistes dominula. The Ropaliidine Old World tribe also comprises another 300-350 species while the neotropical tribes Mischocyttarini and Epiponini contain over 250-275 species so there are around 1100-1200 wasp species worldwide and half of them are found in Neotropics. Their population is expanded from North America, Southern Canada till Central America.

Paper wasps use their mouth parts for chewing and building the nest by collecting wood fiber from the post, and live plants stem causing damage to your gardens.

Paper wasps sting repeatedly, and they cause typically localized swelling along with their sting. In susceptible individuals, wasp sting may cause systemic reaction i.e. allergy which may lead to death if not treated on time.

Apply cold compresses such as ice pack or cold flannel. Take painkillers either Ibuprofen or Paracetamol for a soothing effect and to get relief from pain. Take antihistamines if you have any swelling in response to the sting. Consult your doctor or medical professional if you are not sure about the sting. If any individual has following symptoms so call the ambulance: nausea, vomiting, diarrhea, difficulty breathing, dizziness, wheezing, swollen mouth and face issues in swallowing. 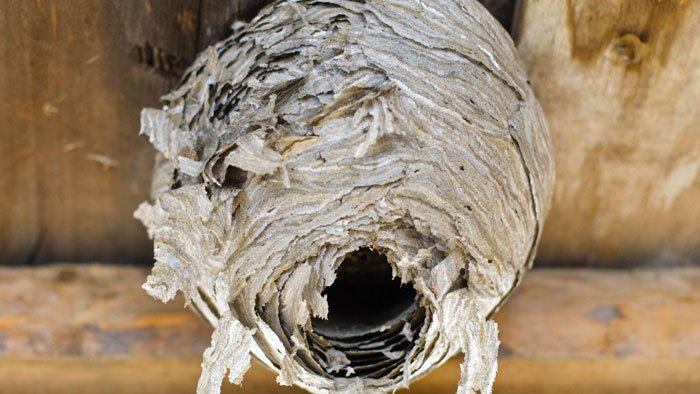 Paper wasps are found near your homes if you can tolerate the presence of paper wasps leave them as it is, however, if you or any other family member has an allergy against paper wasps so remove them. You can either use the methods mentioned in the article or call the professional exterminator to get rid of them. Wasp enters the commercial buildings and homes through small openings. Seal the access points to prevent infestation and avoid protective and shady places near your home.

How to Control Paper Wasps

Wasps do not reuse their previous nest; many wasp species build their new nests over the top of their old ones. Therefore, it is a perfect idea to knock down abandoned or empty nests during the winters and clean that area before the queen wasp returns during the spring season and claims the nest.

Seal entry holes, unsealed vents, cracks, loose siding around doorframes and windows. Do a complete inspection of your outside area around your house during winters and seal off all the potential sites which are infested by wasps. The locations mentioned above are ideal for wasp’s nest so seal them off to prevent the possible infestation during the spring season. Seal the garbage cans as the scent of the trash may attract the wasps. Clean and disinfect the garbage can regularly to avoid any food residues left behind. 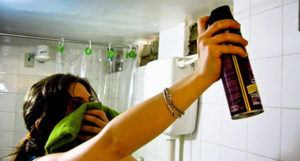 Insecticidal dust is very efficient when compared to the aerosol sprays. They are used for ground nests and easily penetrate the core of the nests. Use insecticidal dust, for example, Sevin 5 Garden Dust which measures around 1/4th cup either in a disposable plastic cup or bulb duster. Apply the insecticide dust early morning or during night time wearing protective gear. Moreover, vacate the area immediately.

Do not cover or block the nests-let the wasps exit and enter freely. As soon as they pass through the nest openings, their wings and legs become coated all over with insecticidal dust, which is then carried by the wasps to the nest’s center, where it contaminates other wasps. After you apply insecticidal dust, it results in the death of the wasps within one or two days. Repeat the process if the wasps are not dead.

Paper wasps have one of the largest species and found all around the world. They do not tolerate cold temperatures, therefore, not present in Antarctica. These species will build a nest in your attic and on trees. The sting of the wasp is dangerous and painful. These are annoying creatures and if you want to get rid of them, then use one of the methods mentioned above. They are beneficial regarding pest control by feeding on small insects and also help in pollination.