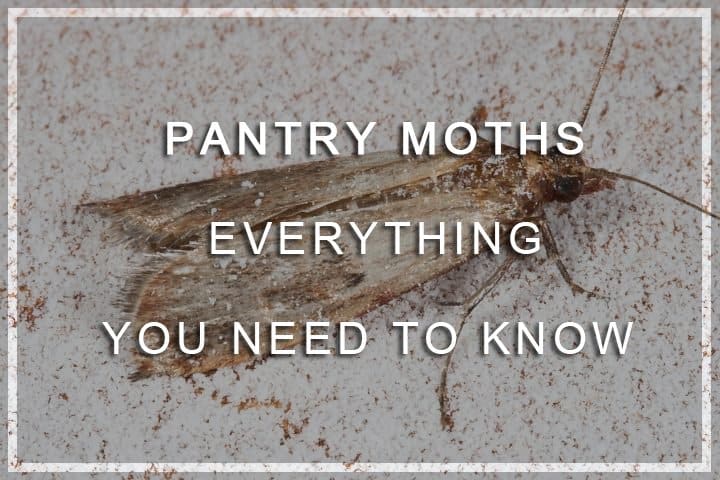 Pantry Moths: Everything You Need to Know

It is common for human beings to get annoyed by the bugs. One of the most irritating of all the moths is pantry moths. It is because they sit on the food all time long and contribute only to making it stale. This, however, can have a severe negative impact on the overall health. This category of moth is usually attracted to stored food. It can be mostly seen around places like the kitchen, food stores, restaurants and many more. The pantry moths are spotted in at least all the food processing areas.

What are pantry moths? 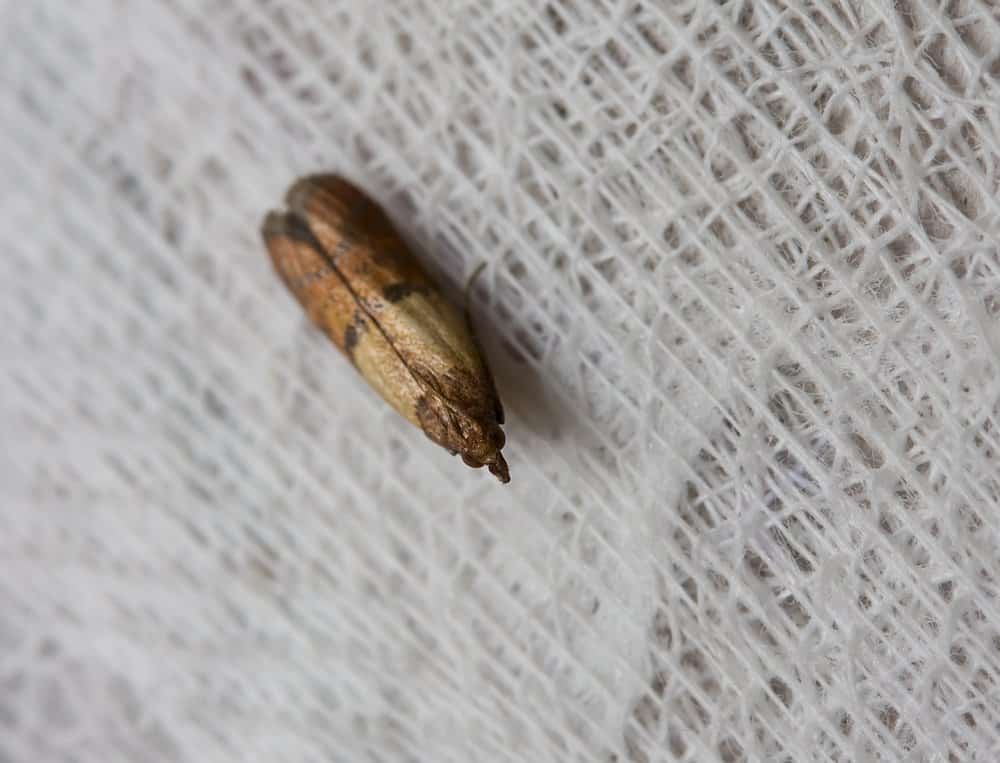 These pantry moths are called by several names, such as weevil moth, flour moth, grain moth, seed moth, Miller moth, and Indian-meal moth. Although it is known as the Indian-meal moth, it significantly does not owe its original to India. These pantry moths are often confused with a series of moths such as almond moths, stored grain moths, Mediterranean flour moth and more.

The pantry moths are not the same as waxworms, although they are often confused to be. These moths can prove to be substantial damage to the grain crops. However, it is really tough to get rid of the Pantry Moths.

Information and identification of pantry moths 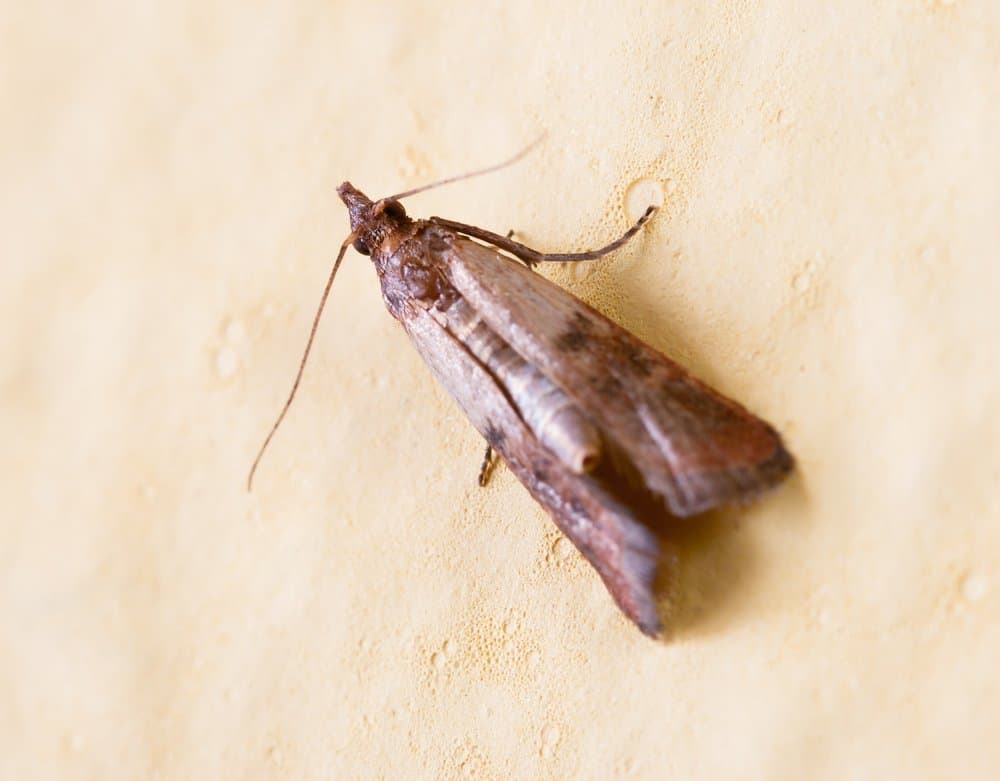 The adult pantry moths have a length of 8-10mm while the span of wings is 16-20mm. The two-third area of its wings are often reddish brown in color and have a copper luster attached to it. The color often varies to bronze and dark grey too. The frontal area of their wings has the yellow-gray or white-gray color. However, there is a distinction made between the proximal and distal areas with a dark black band. The hindwings of distal moths are completely gray in color.

The Indian meal moths layout white eggs which are very small and oval in shape. One cannot see the pantry moth eggs with the naked eye. Also, the larvae which have been hatched recently are difficult to spot. The newly formed larvae are white in color with brown heads. After five to seven larval instars the moth larvae are formed. The size of matured pantry moth larvae ranges from 12mm to 14mm. They have three legs attached close to the head while the prolegs range from the abdomen. The legs and prolegs allow the larvae to move in the right direction. This further ensures that they have found the perfect pupation space for growing.

The Life Cycle of Pantry Moth 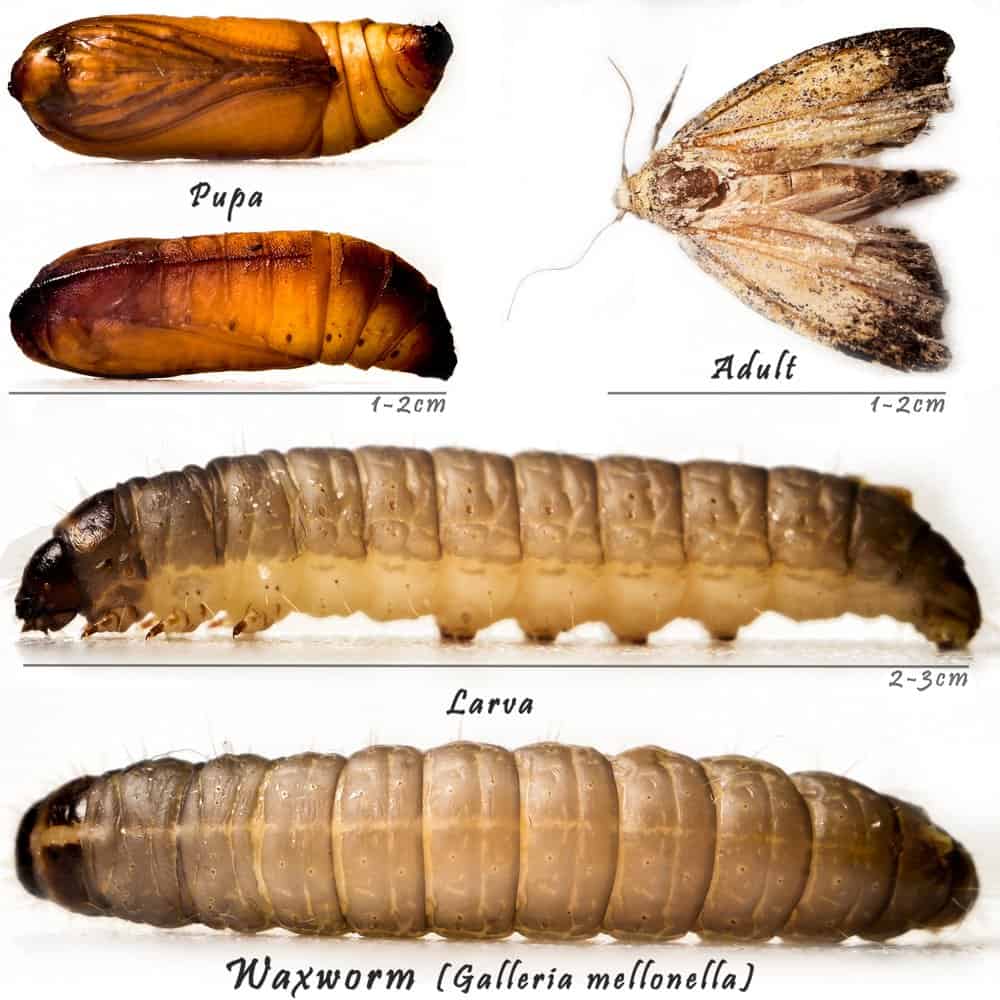 The life cycle of pantry moths have been divided into four parts, the eggs, larvae, adults, and diapause

Larvae usually take about two to fourteen days in order to be hatched. They can be found in the group of five to seven. While the new larvae feed on the grain, the mature ones usually feed on the grain germs. These are usually off-white in color but can also be pink, greenish or brown in color. Their length is about 12mm with prolegs that help in their movement. The completely mature ones can also spin around and form webs. These may appear like silk threads when they start moving. They also form silk through cocoons.

The adults or the pupae are usually found on the walls of grain bins. They are formed after four to ten days. The complete life cycle of the pantry moths usually lasts about 30 to 300 days. Nonetheless, one typical life cycle can last about 50 days. However, in case of severe weather conditions, the lifespan may even shorten up to 28 days. Thus, in a year about seven to nine generations of pantry moths can live.

Diapause refers to the interference of external conditions which further result in a delay in the development of animals. It can be treated if the other weather conditions are effectively treated. Therefore, there is always a difference in the diapause of the animals. Diapause usually occurs if the mating season or the breeding season is late. Another prominent reason for diapause includes the increased or decreased temperature during the hatching of the egg. All the different categories have different reasons for diapause. 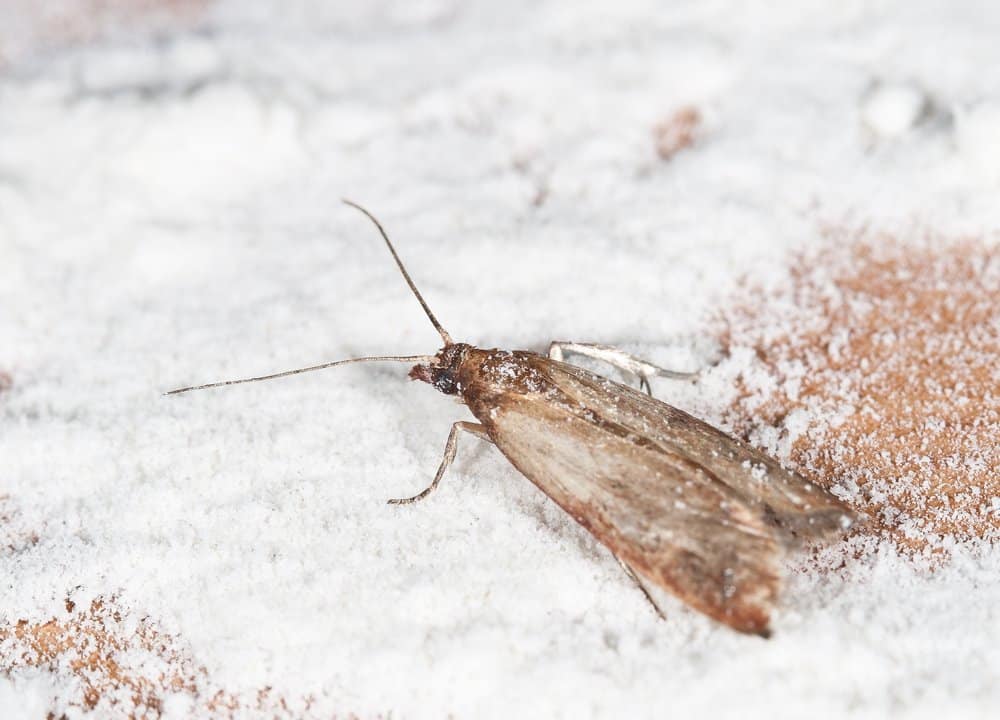 Pantry moths often tend to go behind their food source. They usually move to the kitchen in packaged foods which further lead to grocery stores or stores where foods are processed. The pantry moths often enter the house through doors, windows and any small space near the screen space.

The pantry moths usually feed upon grain products and other food sources such as dried foods, animal products, and other edible products. These pantry moths are usually found near the pantry closet and cabinets. This is because the pantry behind the kitchen is dark and the food isn’t disturbed. If proper precautions are not taken properly, the pantry moth may not leave the space easily.

These Indian meal moths or pantry moths are often difficult to get away with. Hence, many factory owners and people are tired of them. These pantry moths can appear into your house out of nowhere and can further be a problem. These usually breed in the garage areas. Usually, people have been using DIY traps and others pest control measures in order to drive away the pantry moths from their house. These traps are sticky in nature that lure the moths in them. Eventually, these get stuck on the surface and die. You need to place these moths in the area where there are too many of them within your house. One of the easiest methods to kill the Indian meal moths are the trap. However, you need to keep on changing these traps alternatively in every three months to ensure their proper functioning. You can also change these moth traps earlier if you think it is significant.

Where are pantry moths from? 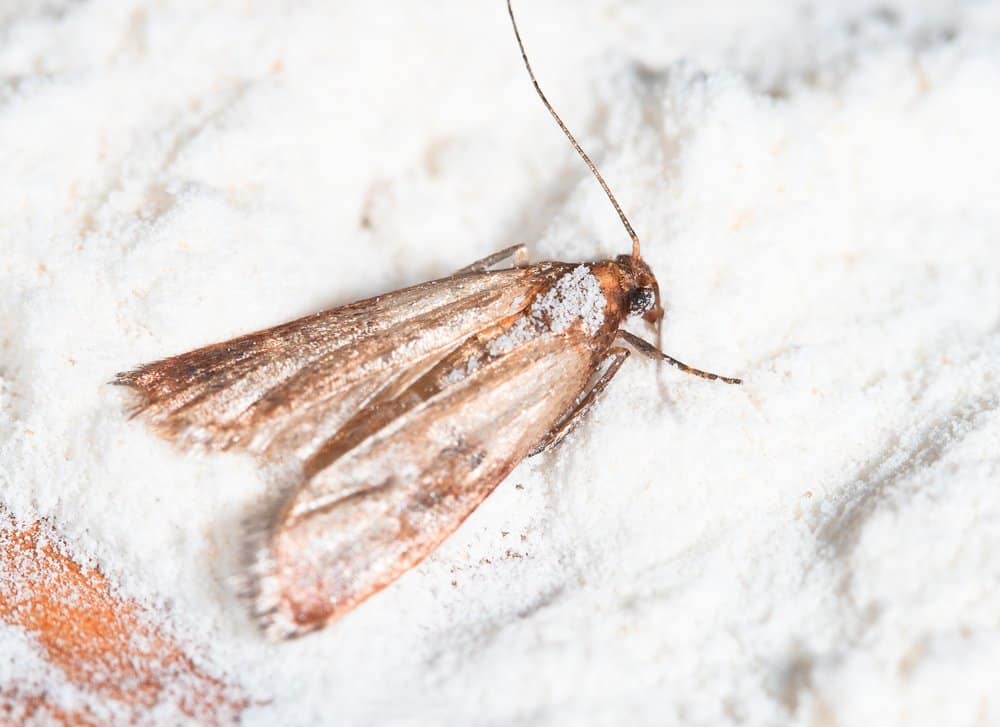 If initially observed, the motive of the pantry moths is to reproduce. The adult moths keep on mating which further leads to the increase in their number. These usually start mating upon the foods thereby contaminating them. The food products are referred to be the safest place for them to reproduce. They lay their eggs upon the food which further allows their kid to survive under sufficient surviving conditions. In order to find a mating partner, they usually use their smelling sense and further set out on their search. They also rely on the food products to look for a partner.

Thus, the initial source of these pantry moths are the food products. They usually enter the house through windows, creaks, holes on the walls and other such spaces. They may also enter the house through small openings visible neat dry vents, cables, plumbing lines. Allowing food to stay open in your house can allow a number of insects and moths to enter your house. This further leads to contaminated food. Detecting pantry moths is often difficult. You can notice the pantry moths once they have become adult. The eggs laid by pantry moths are tough to notice. So you will get to notice them once they become big and start roaming around your house.

Are these pantry moths harmful?

Although not much is known about pantry moths spreading diseases, they can contaminate the food. This is usually severe damage to foods in the kitchen and pantry. Therefore, expensive foods can be easily damaged due to pantry moths. The pantry moths can prove to be extremely damaged in the food processing units. They form webs in the stores which can eventually lead to damage.

It is better to take preventive measures rather than cleaning up the infestation. If you have noticed pantry moths roaming into your house, you should take proper measures. This will help to lower the risk of pantry moths.

Where do pantry moths lay their eggs?

The pantry moths usually lay their eggs directly on food sources such as bread, flour pasta, nuts, candy, cereals, powdered milk, crackers, dried fruit, dried herbs and more. Since the eggs are laid on these food products directly, not taking measures to avoid it can prove to be extremely dangerous.

Can eating pantry moth eggs and larvae make you sick?

Pantry moths are commonly known as Indian meal moths, and they are the most commonly known insects which can infect the households. The eggs usually take about 30-275 days to be completely hatched. The delay in the maturation of eggs can further prove to be damaging for the health conditions. The foods that are infected by the pantry moths have silk webs around them. These silk webs are often observed on the surface of the food.

Firstly, you should analyze how the insects infected the food before you determine what results the food may have. There are several reasons for which the food may be infected such as leaving them open in order to be exposed to the damage. Even if the food had been packed properly, the food might still be damaged owing to some carelessness. If your food has been infected, you should refrain from eating since it is not fresh. There are chances that your pantry moth had affected the food even before the packaging had been opened. Thus, you should take proper care in order to avoid the pantry moths damaging the food.

Steps to turn down the pantry moth infection

If you have been considering that your food is being infected by pantry moth, you should be taking proper care and measure. The simple steps that you can take to avoid the moth infestation include.

Before you tear the packages in your home, you should check whether the food packaging is internally damaged or not.

When you have purchased a flour box, and so, you can check if the food has been damaged or not. You should ensure to store it properly in a Ziploc bag or plastic container.

If you have any contaminated food in your house, it is better if you take proper measures in order to dispose of it. You can also keep the food in any freezer to kill the pantry moths. Make sure to store it for a time period of one week. You can also keep it any microwave for five minutes to kill it.

The pantry moths can prove to be extremely irritating. Although you won’t be affected, the gross feeling would be persistent. It is better to check for the overall measures in order to avoid it.