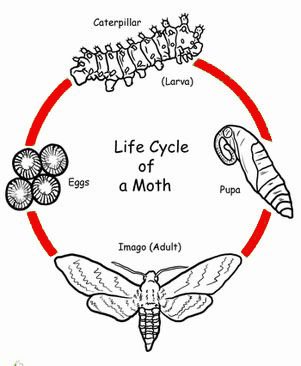 Whether you love them or hate them, moths are very interesting creatures. You might have a few moths in your closet eating away at your clothes, but those are pretty easy to take care of. The fact of the matter is that there are thousands of moth species and they are not going anywhere anytime soon. The study of moths is also quite interesting and there is a lot more to know than you might think. They might look like some fairly simple creatures, but the stunning transformations they go through are absolutely breathtaking.

As you probably know, moths do not actually start out as moths. They go through a life cycle of various stages that takes them from being an egg, to larva (better known as the caterpillar), then the pupa, and finally the adult moth. Each of the first stages is very important to the development and growth of what is to become an adult moth. There is quite a bit to know about each of these stages of the moth’s life cycle so, let’s get to it and talk about everything there is to know about moths. The very first stage of the life cycle of a moth is the embryonic stage. This is the stage where the embryo develops inside of the egg. This is not unlike birds or fish embryos developing in their respective eggs. This all begins when a male and female moth mate. There is a fairly intense and complicated mating ritual that adult male and female moths go through, one that results in the fertilization of the eggs inside of the female moth.

The female moth then looks for a place to lay her eggs. She will usually choose somewhere with a lot of plant matter. The plant matter will serve as a good food source for the moth larvae or caterpillars once they hatch from their eggs. On a side note, this is why many people find moths in their closets with their clothes. Caterpillars like to eat certain types of clothing fibers, which is also true for adult moths. Once the eggs are laid, they need some time to gestate.

Moth eggs can take anywhere from 4 to 10 days to gestate, which means that they will usually always hatch within 10 days of being laid. It does take the right conditions to help the eggs gestate and for the embryos to mature. A fair bit of humidity and warm temperatures are essential to the gestation of caterpillar embryos. How long an egg takes to gestate does also depend on the exact species of moth in question, but generally speaking, 10 days is the longest that gestation will take.

On an interesting side note, over a period of about 2 weeks, a female moth can lay about 40 or 50 eggs. After the eggs have been laid, the female moth will die shortly afterwards. That said, there are some species which can lay around 200 to 300 eggs in a lifetime. The embryo takes about 10 days to grow, absorb nutrients from the eggs, and finally hatch into a larva, which we commonly refer to as a caterpillar. Just so there is no confusion, “larva” is singular and “larvae” is plural. For the purpose of today’s articles, we will be referring to moth larvae simply as caterpillars. As soon as the caterpillar hatches, in most cases, the first thing that it eats is the shell from which it just emerged. The shell contains a lot of proteins, vitamins, and other nutrients which the caterpillar needs to survive, develop, and grow. We are not going to talk about what caterpillars look like for the most part, which is because there are hundreds of moth species out there and the different species don't look the same.

When the larva hatches at first, it is said to be in its first instar. The instars are stages of development for moth caterpillars. Moths go through a process of molting and shedding, just like spiders, snakes, and other animals do. This means that the skin or shell around them does not grow with the inside of their bodies; thus, it needs to be shed and a new one developed to match the increasing size of the animal. In technical terms, this shell or skin is called a cuticle. When the caterpillar first hatches, before it molts and sheds, it is said to be in its first instar.

Caterpillars will most often eat the cuticles which they shed, as they are usually full of proteins, nutrients, and other substances that are beneficial for growth. After a caterpillar sheds its cuticle for the first time, it is then in its second instar. Some caterpillars will look significantly different after each instar, while some just look bigger, but essentially the same. How many instars a caterpillar goes through depends on the food, climate, and type of moth that it is to turn into.

Caterpillars will eat around 2,700 times their own body weight in order to get big and prepare for the next stage in its life, the pupal stage, where the miraculous transformation from caterpillar to moth occurs. The length of time a caterpillar stays in the larval stage varies from one species to another and it depends on the climate as well as the amount and quality of available food.

The caterpillar will continue the cycle of eating and molting until it reaches its final instar, which means that it is time for pupation. When a caterpillar is ready to become a cocoon and transform into a moth, it will most often wander away from the plant it lives on in order to find a safe space transform, usually one that is warm, humid, and is safe from predators. Once this suitable pupation site is found, the caterpillar will shed its final cuticle, which is hard, in order to begin transformation. This is the pupal stage and it is by far the most interesting part of the moth life cycle. This is where the caterpillar transforms itself into a fully grown adult moth, wings and all. Now, what is interesting to note is that a moth in its pupal stage is referred to as being in its cocoon. On the other hand, when a butterfly is in its pupal stage, the structure which it builds around itself is called a chrysalis. Either way, the cocoon is where the larva will transform itself into the fully grown moth.

A caterpillar has the ability to spin a type of silk made out of proteins which it produces. A caterpillar spins this silk into a protective shell called the cocoon, inside of which the transformation process will occur. The purpose of the cocoon is to offer protection for the vulnerable larva while it transforms, plus it keeps everything contained. Also, many people make the mistake of thinking that this is a resting stage for the larva. While the larva does not eat anything or actually move about during this stage, it is definitely not at rest. All of that food that the caterpillar ate during the larval stage is now being put to use. The food energy is being used for the most energy intensive process that the caterpillar or moth will ever go through. Yes, it takes a whole lot of energy for this transformation to occur. You might also be interested to know that this transformation is technically referred to as metamorphosis.

What is really interesting is that the caterpillar does not actually grow into a moth per say; it goes through a process called histolysis. There is a special group of transformative cells which remain, dormant, inactive, and unseen during the pupal stage of a caterpillar’s life. These cells break the caterpillar down until it is nothing more than a pile of cells, more or less an accumulation of goop. Now it is ready to reform itself into a moth.

This reforming process is called histogenesis. If you are into etymology, the word histogenesis comes from two Latin words, with “histo” meaning “tissue” and “genesis” meaning “the beginning.” As you can see, the term histogenesis perfectly fits what goes on during this pupal stage. We are not going to get too much into the scientific stuff here, but these special cells now begin to rearrange the DNA and cells inside of the cocoon, thus forming the adult moth.

How long this process takes depends on the environment, the species and size of the moth. Most moths will take between 5 and 21 days to cocoon from a caterpillar into an adult moth. There are various signals which the pupa, or full grown moth, will receive which means that it is time to emerge from the cocoon. These can be environmental factors or it can also be a chemical signals from within itself, signaling that the transformation process is complete. This is the final stage of the moth life cycle, the stage where it actually has wings and can fly around. An adult moth is technically called an “imago,” therefore making this stage of its life the imaginal stage. It takes quite a while for the adult moth to emerge from the cocoon, as at this time it is soft, weak, and quite fragile. Getting out of that cocoon is a difficult process. When the moth first emerges from the cocoon, it will have a severely bloated abdomen and shriveled wings, rendering it unable to fly for the first few hours of its adult life.

During the pupal stage where metamorphosis happens, there is a lot waste produced by the transformation process. This is called meconium, a reddish slimy liquid which the moth will defecate out of its anus once it is ready to do so. At the same time, moths are full of hemolymph, which is actually the equivalent to blood in invertebrates. In other words, invertebrates like moths have hemolymph, which is the equivalent to blood in mammals and other animals.

The moth must take a few hours to pump this blood equivalent into its wings, thus getting them to full size, and enabling it to fly. On a side note, moths emerge from their cocoon quite wet, and while a moth’s wings are wet, it cannot fly, so it must also wait until it is dry before it can fly. An adult moth does not live for long, but once again, this does depend on the species. Some moths live for a few weeks, some live for a couple of months, and in some rare cases, some adults moths can live for 8, 9, or even 10 months. Moths usually are not that big, being somewhere between 1 and 3 cm in size, but there are indeed some larger ones out there.

In all reality, the majority of moths out there will not reach old age. Most will be killed by weather or predators before they reach the end of their life cycle. When it comes to female moths, they usually die after laying eggs, thus completing the moth life cycle and starting a whole new cycle at the same time.

As you can see, the transformation from egg to larva to pupa to an adult moth is a very interesting one. There is a lot more involved here than people might think. So, next time you see a cocoon, let it be and wait until that beautiful moth emerges from it!