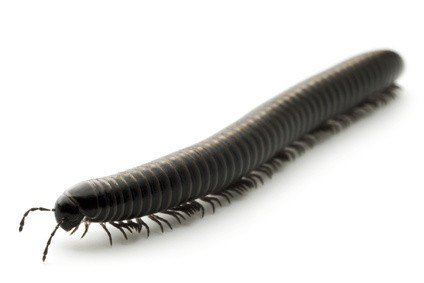 Millipedes also know as rain worms or 1000-legged worm which is just a myth. The largest legged millipede discovered to have 750 legs. However, they have been given this name because of their unique appearance. They are the part of the phylum arthropods. They have rounded body segments which get straight when they walk. The legs are in pairs which give the balance to the body. The head consists of antennae. Their size can vary from 1 to 2 inches from species to species. They are found in light, dark brown and mainly black. You can find them outside the home after rains. They can easily climb walls and can enter cracked walls and find their way inside homes.

Their habitat is mostly damp places; they like to live near water. Some of the species can live under water for months, but some are unable to swim, so they live, where the soil is damp. They mostly target areas for living where there are gardens, yards, and crops. You can easily find them after rain outside your houses. They easily come out after raining. You can also find them in the soil, under leaves, and in the plant sap. They thrive in damp areas and can live on decaying plants, woods, and tiny insects. Scientists say that they migrate from their original places because of the heavy rain when the species that are unable to swim comes under the attack of water, they migrate and this is mostly the time when you see them outside of your houses, yards or gardens. They also enter homes and dog sheds. They prepare themselves for the winter. They look for food for storage and shelter to prevent cold. Even they move in a great number entering homes, especially in basements looking for shelter under the furniture’s and finding food. They can even live in the wood of the furniture. They are very active when feeding. They hide below anything when they sense a disturbance.

They produce by sexual reproduction. They start mating reaching at the age of two. They can live for years. Their mate during the whole year. They deposit their eggs in the soil which is soft, and that is why you can see these insects crawling from below the soil when you do gardening. They are highly active when mating. They are large in population. They increase their population when they find a friendly suitable environment for their eggs and nymphs.

Millipedes are not exactly like the same other insects. They possess toxic compounds that they use as their defense mechanism. They consist of different compounds, and these compounds can cause chemical burns. They are highly active at the time of the attack and can easily win from other insects who do not pay attention or know their unique possesses of toxic compounds. These toxic compounds can be very harmful if they get in touch with humans. They can cause burns and serious allergic reactions. Even scientists have done experiments on millipedes by crushing them and examining them. They say that millipedes smell like hydrogen cyanide that repels the predators. They through these toxic compounds from mouth to the predator as a precautionary measure. Sometimes when they encounter with the human body, or they pass from any human part, it can cause severe allergy, and your skin can start to get red and bumpy. The solution to these severe reactions is taking a bath with cold water and using antiseptic soaps that can prevent the further reaction of the body.

Millipedes are also known as 1000 leggers, but it is a myth. The world’s largest legged millipede is consisting of 750 legs only. They have been given this name because they were the first ones to come on the ground. Even the scientists are unable to predict that how many legs they had thousands of years ago. It Is one of the World’s longest living species that you can even find today.

2. They only have three pairs of legs when they are born

Their growth rate is so high that you can imagine it from this, that they only have three pairs of legs when they hatch from the eggs and reaches the adult, maturity stage at two and starts mating.

3. They can transform their shapes

They can easily transform their shapes. They use the spiral shapes when they are under attack. Otherwise, they walk with a straight body. Their shapes changes because of their nature. They are usually in straight shape at the time of mating and walking. At the time of an attack, they change their shape into a spiral like to prevent danger.

They possess toxic compounds that they use as their defense mechanism. They consist of different compounds, and these compounds can cause chemical burns. These chemical burns can leave marks. They also leave marks on the ground when you kill them because of the toxic nature of their body. The hydrogen cyanide can cause severe burns and irritation. Sometimes It leads to severe allergic reactions in the body when they encounter with the skin. They are highly sensitive and they can through toxic compounds at the time of danger. So, it is necessary to be in conscious at the time of killing them.

5. Male rubs the back of females for mating

The male millipedes sometimes to grab the interest of females for mating rub their bags so that they can come in the straight position because their reproductive organs are behind the last pair of legs. Sometimes they make voices as a song for attracting and relaxing the female millipedes. The female ones do not open themselves for every male. They mostly stay alone. They mate when the male ones rub their backs for relaxation.

6. They bury their eggs in the soil

The female millipede burrows the eggs into the soil and digs a nest where she will lay her eggs. It takes months, and then the eggs get hatched. The female knows where she laid her eggs before and used the previous place again for other offspring. The new eggs can get their nourishment from the soil. The soil in which they lay eggs and can live for the month is mostly damp. The newly born eats the worms, ants, and spiders from the soil to gain strength. The mother lays eggs with feces as a nourishing material for the newly born. This process can take months for the new ones to reach the ground level and starts looking food and shelter.

7. They have long lives

These insects can live up to 7 to 9 years and can live easily in a non-friendly environment. They are not like other small insects. They are unique as their characters, and their long-lasting lives give them strength.

8. They were the first to live on land

Millipedes are the kind of unique insects from the phylum arthropods that shows many distinction qualities than the other insects. The millipedes are now used as human food because of their nutritional value. This has led to a new advancement in the field of science. The consists of fatty acids, calcium, iron, blood cells and their defensive secretions that are being used as a food source now. People are also obtaining chemical substances from them and using these substances to kill other insects by making insecticides. The hydrogen cyanide obtained from them are used as a defensive source for malaria, or to cure patients of malaria and other similar diseases.

Do millipede cause problem

Millipedes are the kind of insects that do not cause other diseases, but they are harmful to the plants because they damage the roots, stem, leaves, fruits, seeds and the food sap. They destroy the epidermis of plants which can slow down the growth of plants and even kill them. They enter the homes in large population during their migration period. However, they are not the cause of damages inside the house. The millipedes can be harmful if they encounter with the skin of humans. Their toxic and poisonous glands can be a great threat because it can cause severe burns and high-intensity irritation. If the person is weak, he can also get faint in some cases. They cause serious allergic reactions that can make the person miserable for several days. If you get ever encounter with millipedes and they touch your hands or any other body part, take a bath with antiseptic soap or body wash.

It is also another simple way to make sure there are no millipedes at your home. This way is the most used way in the houses where basements filled with these insects. The vacuum will suck them up, and you can easily dispose of them by emptying the vacuum bag outside of the house.

This millipede killer works as treatment or a barrier by which the millipedes are unable to enter the houses or yards. It is a liquid matter that is used after every three months. This method is effective because it also helps to make sure that they do not enter the homes in the rainy season.

It is a powder-like substance that is used to kill or suffocate the millipedes. They are especially used in those areas where the granules are unable to reach. For example, small cracks inside the walls. The powder should be used after 2 to 3 months for preventing millipedes.

Note: Wash your hands with antiseptic soap after using these chemical compounds.

The millipedes are unique insects that contain toxic compounds, and they can be highly dangerous when encounters skin. They are also dangerous for crops and plants. They eat wood when they enter the houses. They can survive in woods for years. They live in large populations, so it is necessary to prevent them entering the houses and yards. They can be prevented by using granule or powder millipede killer. However, these chemical compounds are harmful to nature.  Can also use other home based like using traps and vacuum. It is necessary to wash your hands after using these millipedes chemical control substances.