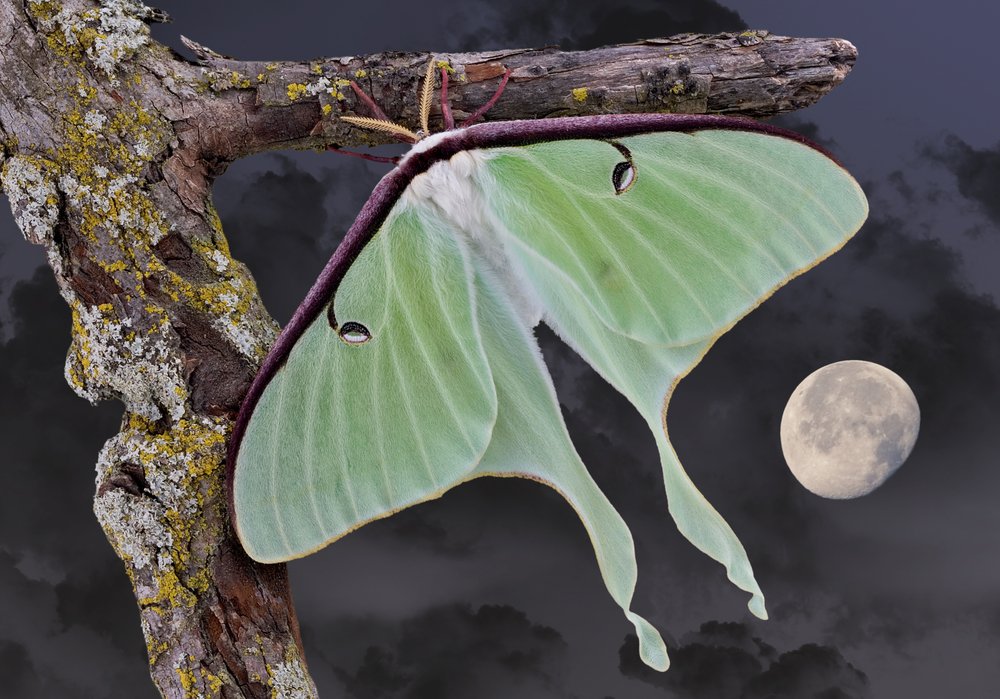 The luna moth, also known as actias luna, is a lime-green moth, and one of the largest in North America. With a wing span ranging from 3-4.5 inches across, these large, beautiful moths are extremely popular.

Luna moths live in deciduous forests, and range the eastern half of North America, from as far north as Saskatchewan in Canada, to as far south as Florida. There has even been a luna moth sighting in Mexico City. They have bright green wings with distinctive eyespots, and long curved tails. Their large wings make them excellent fliers, and, like many moths, they are attracted to lights.

While these moths are considered a common species, their spectacular beauty, nocturnal habits, and short life spans never fail to make a luna moth sighting special. Many people have made a hobby of raising luna moths just so they can enjoy them up close.

Life Stage About the Luna Moth

Luna moth caterpillars hatch from tiny eggs, no more than 2 millimeters long and slightly oval shaped. The eggs are white, but patched with brown adhesive that sticks them to the leaves they were laid upon. Luna moth caterpillars are bright green with pale green or golden spots, and have tiny spiny hairs on them. Like many caterpillars, their main occupation is eating. While they are young, they may stay with their siblings, before moving off and settling in to a solitary life of eating the plant they have settled on. The species of tree that the caterpillars favor vary depending on their region, but they live and feed on the leaves of birch, alder, persimmon, hickory, walnut, willow, ash, and other trees. The larvae go through five instars over the course of two months of feeding, eventually reaching an enormous 65 millimeters in length.

When attacked or threatened, luna moth caterpillars can rear up on their hind legs, make a clicking sound, and even vomit unpleasant fluids onto their attacker. These actions have been shown to deter many attackers, even though a caterpillar of such enormous size is appealing to many predators.

Just before they are ready to make a cocoon, they turn a deep brownish orange color.

The caterpillar will eventually build a single-layer cocoon wrapped in leaves and begin to pupate. They stay in their cocoons for about two weeks in regions where there are two or three generations in a year. In the northern parts of their range, they will stay in the cocoon through fall and winter, to only emerge in the springtime. If they sense unfavorable conditions outside the cocoon, they can enter a phase known as diapause, similar to hibernation, until light or temperature conditions trigger the emergence of the moth. Luna Moths are unusually active inside their cocoons, able to wiggle and make noise when they are disturbed or threatened. It is also in the pupal stage that differences between male and female luna moths first become visible. While differences between male and female luna moths are difficult to detect earlier in life, it is in their adult phase that the differences become clear. Both moths emerge from their cocoons with weak, damp, folded wings that are not yet ready to fly.

Males emerge in the morning, and spend 2-3 hours drying their wings and preparing for flight. Females emerge later in the day, and also dry their wings, because the ability to fly at night is key for protection from predators.

However, instead of flying right away, the female stays where she is, and instead begins to emit powerful pheromones designed to attract males. Her pheromone production peaks at about midnight, enticing the nocturnal males to come find her.

The male luna moth has much larger, bushier, and more sensitive antennae than the female, designed to detect these pheromones and be guided toward a female. When he senses a female nearby, he flies toward her and they mate. Then he flies away searching for another female. He has only a few short days to mate with as many females as he can.

Once she has mated, the female luna moth begins laying her eggs. She goes from tree to tree, laying small clutches of 4-6 eggs at a time. She will eventually lay nearly 600 eggs before she, too, dies.

Adult luna moths live for only about 7 days, long enough to breed and lay eggs. This is one of the reasons these moths, although large in number, are scarce to see.

Where Can You Find a Luna Moth?

Luna moths live in the eastern United States and southeastern Canada. They are most common in Tennessee, Alabama, Georgia, the Carolinas, and Kentucky, but are easily found east of the Great Plains. In the northern part of the LUNA MOTH range, in the northern United States and Southern Canada, they have one brood a year, reaching adulthood in early June through early July. In the middle part of their range, around the northeastern United States, they produce two broods a year. The first adults emerge in April or May, and a second group of adults emerges nine to eleven weeks later. In the southern part of their range, they can produce as many as three generations in a year, beginning in February and emerging eight to ten weeks apart. The final brood of a year will overwinter in the pupal stage, snug in their cocoons, to emerge as adults in the spring.

Once you know what time of year to anticipate luna moths, depending on your area, and what type of local trees they prefer, the next thing you have to do to find a luna moth is wait until nightfall. They only fly at night, and they are most active at midnight, when the female's pheromones are strongest.

Both male and female luna moths are strongly attracted to light, so it's easy to throw a late-night moth viewing party. The same way you may have flowers to attract beautiful butterflies to your garden in the daytime, you can use light to attract luna moths at night.

To attract adult luna moths to your lawn or garden for a night-time viewing party:

While it's possible to use food sources to attract some species of moths, adult luna moths do not eat and won't respond to bait. But they will respond to light, and come visit your garden and land on the illuminated sheet, where they can be clearly seen and photographed.

It's worth noting that this shouldn't be done for long periods or too frequently during the Luna Moth season, because it distracts them from the important business of breeding. They have a limited time in which to breed and lay eggs successfully, so don't distract them too often or for too long. But it is a great way to see these spectacular beauties up close and make the most of the brief luna moth season. While luna moths are not yet threatened as a species, their numbers are in decline. The reduction in population is due to several factors:

People are increasingly using a wide variety of pesticides, primarily in agricultural environments that encroach on the luna moth's forested habitat. Luna moths can spend several months of their lives in a pupal stage, where they are unable to escape from a toxic environment. As caterpillars, they have some freedom of movement, but their need to consume large volumes of food can limit their ability to cover large distances. It renders them more vulnerable to consuming pesticides that may have been sprayed onto the trees they are eating. As adults, they are also vulnerable to many pesticides.

The deciduous forests that luna moths live in and feed on are dwindling in size due to urban expansion. As people convert previously forested areas into housing, commercial, and recreational spaces, not only do they clear the land and remove the existing forest, but they also frequently plant non-native trees that are not suitable for luna moth caterpillars to use as a food source.

All moths are attracted to light, but luna moths are particularly influenced by it. As our nights become increasingly bright with artificial light sources, these lights attract luna moths, who spend their precious short time and energy reserves flying at lights instead of reproducing.

These lights can also make them more vulnerable to predators, because they are more easily seen than other moths due to their large size. Because their adult life span is so short, these distractions and delays have great potential to harm the overall population of the species, and scientists have expressed concern about the effects of urban light pollution on the luna moth population.

Fortunately, the luna moth is not yet threatened, and it's not too late to rethink some of our environmental and living practices to protect their numbers. If you own a home in the luna moth range, consider planting native deciduous trees on your lawn or on your parking strip as a way to provide more habitat for these wonderful moths.

Reconsider exterior lighting on your home, reducing it where it is unnecessary, and keeping lights dim and aimed downward, rather than upward, if they are necessary. Support efforts to protect the luna moth habitat so that future generations can be visited by these rare and wonderful creatures, and a species unique to North America can live on for the world to enjoy.