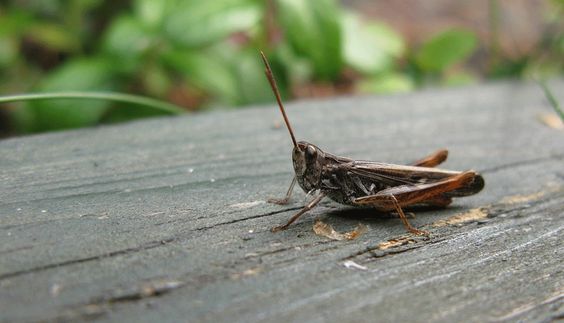 Locusts are invertebrate insects belonging to the family Acrididae. Also known as short-horned Grasshoppers, they are shy, recluse insects, which prefer to live alone rather than living in groups. They are closely related to grasshoppers. Grasshoppers and locusts look very similar to each other and often it becomes very difficult to recognize one from another. There is only one way to distinguish locusts from grasshoppers, that is, there are two behavioral phases of locusts whereas no other behavioral phase is seen in the case of Grasshoppers.

There are various species of locusts. Some of them are listed as below: These locusts are usually found in Australia and can cause great harm to the agricultural sector. They have an approximate size of about 25 to 45mm and are typically green and brown in color. They damage crops and plants to a considerable level and effects the young crops ruining them badly. These locusts are found in the south western part of India and are considered as a solitary insect. They shed their skin after growing up and usually they are green in color having black spots on their bodies. They also exist in pale brown and yellowish color and can exhibit a swarming behavior causing losses to the growth of crops and plants. They can also infect your crops and ruin them badly. These desert locusts are usually found in deserts and can travel long distances and infect your crops. Not only do they form swarms and affect crops of a particular area but when they feel content, they can move onto other areas and spoil the crops in those areas as well. Migratory locusts are just another breed of locusts that are mostly found in the southern Asia which can feed on crops such as groundnut, maize, coconut, sugarcane, barley, etc. and incur huge losses for the farmers. These locusts have faced extinction and no longer exist in our world. But they had the capability of forming the largest swarms of locusts and attacking the crops in such a way that in no condition the crops can be saved from the harm caused by them.

Red locusts look like a grasshopper and usually make their move in dry seasons. They have a color tone of beige and red color and cause great destructions by infesting the crops. Locusts have a lifecycle of about a year; they die around winter except for the pygmy locusts. These pygmy locusts can even survive the whole winters and turn out to be an adult in the spring season. Other locusts usually just come out of their eggs in the spring season and are not remarked by the ability to fly whereas by spring season, pygmy locusts are almost turned into an adult and can fly infesting and hampering the crops. These locusts have a huge appetite for food and are known for their eating habits which can cause huge losses to the farmers and mankind. If these locusts infest farms in swarms, then it becomes highly difficult to control such a situation.

In this process, male locust inserts its abdominal tip in the abdominal opening of the female locust and releases its sperm. Sperm enters into the oviduct and then into sperm sac, waiting for the eggs. When the time comes for laying of the eggs then sperm is released from the sperm sac and fuses with the egg.

According to Australian Ministry of Agriculture, the female ovulates in moist sand soon after mating.  Female uses its abdominal tip to create a hole of 2-10 cm in depth in the moist soil and releases the egg in a pod-like structure. These pod-like structures are secured by foam which protects the egg from getting contaminated and eaten by a predator.

Depending on temperature, the eggs hatch within 10-20 days. Upon hatching, they climb their way up to the ground and as they are wingless, start hopping.

Nymphs undertake five hopper stages. Their hopper stages are known as instars. While going through each instar, they shed their skins and grow wing buds. Their wings don’t fully grow until they have reached their adult stage. These instars last for about eight to ten weeks and it is during these stages that they tend to group into bands and start showing gregarious behaviors.

Nymphs are not able to fly until they are near-adults; their wings are still too soft for them to fly. Their wings take around a week to harden completely and these nymphs which are almost adults are called fledglings. Also, it is during this stage that they consume lots of green plants. This consumption helps in their development process and egg production.

This is the final stage of locust life-cycle and in this stage, they are completely developed. Their wings are now completely developed and they can fly long distances without any problems. They tend to stay in swarms during this stage and create a major havoc in the fields. They migrate to new fields once they have exhausted the supplies of the current fields. They reproduce and die after 8 weeks. First behavioral phase of locusts: In this phase, their bodies are vibrant green in color and these insects repel the insects of their kind, hence living lonely and harmless lives. This phase is called Solitarious Phase.

Second behavioral phase of Locusts: These lonely living insects then undergo some chemical changes in their brain, as a result of which not only their body color changes from vibrant green to striking yellow and black markings, but they are no longer repelled from each other. Rather they come together to form a group, better known as swarms and attack the vegetation of the area living in. This phase is known as the gregarious phase.

These insects, which initially repelled each other now they look for each other, form a group and prepare for the attack. Although a solitary locust cannot cause any trouble, it’s the Locust Swarm that should be feared. Since the pre-historic times, these Locusts Swarms are known to cause pestilence; the swarm of locusts devours everything in their path. But they do cause harm to humans and this destruction is indirect but still gruesome.

They can starve you to death, by eating the very thing which is most important to you. Due to the rapid increase in the population of humans, the most important problem that we are facing is to fill the stomach of every human. And while we have been unsuccessful in doing so, our problems are further increased by these insects.

Locust Swarm directly affects our vegetation by feeding on them. Swarm of Locusts devours everything in their path, they feed on everything that is green. It would take for a swarm, which contains more than a million locusts, less than a day to destroy an entire field. This effect gets worse in the poor nations, where farmers live in the terror of Locust Swarm. They are worried that their entire crop would be destroyed and they would be left with destroyed crops.

The extent of damage depends whether they are moving quickly or staying at the same place for a few days.

Some of the species of locusts are mentioned below: Locusts are certainly not on the highest pedestal of the food chain, so it is very obvious that these creatures have predators too. Due to the speed advantage they have, there are not many predators of locusts. Some of the predators are mentioned below:

Larvae form of cutiefly eats the egg-pods of locusts.

A group of black kites attacks Australian plague locusts. They loop above these swarming locusts, pierce into their swarm; try to capture a locust using their talons. If these kites find themselves unsuccessful then they try another attempt until they are successful in capturing a locust. When they do become successful then they fly up to a height, twist their head, lengthen their legs and treat themselves with a locust. Locusts are the first-rate source of proteins and they are considerably tasty too. In many African and Asian countries, the Locust Swarm which were originally meant to destroy their crops, are eaten and considered as delicacies.

Locusts as a source of protein

Although the proteins of amino acids do not contain an essential amino acid Methionine, which human body can’t produce, it is still a good protein source. Still, it is lesser in quality than casein protein which is found in dairy products.

Locusts as a source of fats