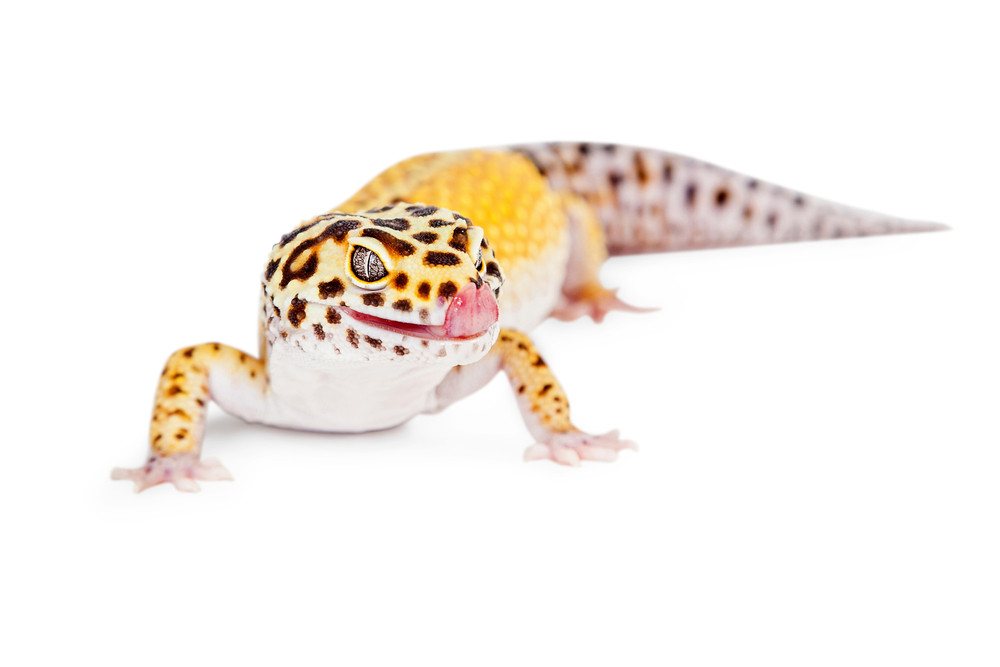 These nocturnal lizards are mostly found within desert environments throughout the dry regions of Iran, Afghanistan, and Pakistan and in some areas of India as well. Since the 80s, Leopard Geckos have been one of the favorite pets in the North America. Because they are more adapted to dry climates, they are more mobile in the sandy environment. These species also don’t have adhesive lamella which gives them quite an edge in such regions for ease of mobility. Instead of this adhesive, they have tiny claws which allow them to move on sandy land. However, Leopard Geckos are not good climbers, and they primarily spend time on the ground. Some of these creatures do have webs that surround their limbs, tails, and neck.

They are unique because they have movable eyelids and transparent membranes which they lick to clean. Despite being one of the popular pets in North America, science has very little information about these beautiful creatures. Their skin coloring gives them a perfect camouflage, and this is a very useful survival tool for them in the wild. To prevent their scent being discovered by the predators, they shed their skins as well. It’s easier to breed geckos locally. Now in North America, the Leopard Geckos are bred because the process is easy as well. Many breeders have their morphs with different sizes, coloring and various other traits and this keeps them popular among the enthusiasts.

Leopard Geckos are the largest of gecko species, and the adult Leopard Geckos grow up to 11 inches in length. The hatchlings can be up to 4 inches in length and can weigh approx. 5 grams. An adult female gecko can grow up to 8 inches in length and can weigh up to 70 grams. An adult male leopard gecko can reach a length of 11 inches and weighs approximately 80 grams. These creatures are polyphyodonts and have the ability to replace all their 100 teeth every 12 to 16 weeks. This is because of the odontogenic stem cells found in their dental lamina. Their tails are also very special. If their tail suffers a heavy injury, it will reduce its size until that part is shed off. For the captive Leopard Geckos if an injury required amputation then their tail will again reduce its size. Due to the newly lost tail, they don’t have any fracture point because there are no bones in it and it is just a fat reserve for the lizard. That’s why they have very distinct bony vertebrate. Captive Leopard Geckos or house geckos tend to have light colors as compared to those geckos which are found in the wild. However, the house geckos do have a wide variety of colors and patterns on their skins. They have a durable skin as they are adaptive to the harsh conditions of the deserts and very high temperatures. 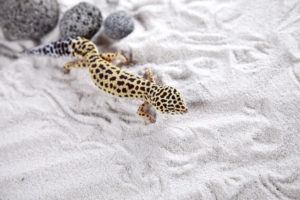 Determining the exact age of a Leopard Gecko can be tough as there is no method of it. The age factor depends a lot on their genetic traits, intake of food, husbandry, and health. Leopard Gecko can change its color with the age. Their babies have a band on their body instead of the spots, and as they age, these bands retreat into spots. After a year of its birth, these bands transform into spots. Leopard Geckos can age up to 20 years and captive Leopard Geckos can age even more if the owners buy healthy lizards as they need minimal care requirements. There have been some cases where these creatures have lived up to 30 years in captivity. However, it’s not very common.

Due to their temperature-dependent sex determination trait, geckos produce females at relatively cooler temperatures which may vary between 26°C to 29°C or at a very warm temperature that ranges from 34°C to 35°C. At intermediate temperatures that tend to range between 32°C to 33°C, these creatures tend to produce predominantly male offspring. This can be done during the first couple of weeks of their incubation. The females that are born at warmer temperatures tend to show aggressive behavior as compared to the females that are born at colder temperatures, and they are also infertile. The females have the tendency to store sperm from first mating and due to this reason; males are not needed after first or second mating. The females lay 6 to 8 clutches, and in each clutch, there are a couple of eggs. The eggs are laid after 3 to 4 weeks from mating. The newly laid eggs are kept together at one place by the female. After about two months or so droplets of moisture began to show and then the eggs began to shrink. Each baby has an egg tooth that allows the babies to break the egg and in a couple of day’s time, they will lose this tooth. After hatching the babies will shed their skin within 24 hours and if they are not able to shed, then they won’t be able to eat anything. Leopard Geckos tend to have a relatively longer lifespan as compared to other reptiles. On average the geckos tend to live up to 10 years, but the males tend to live up to 20 years and even more. In captivity, or poor handling can limit their lifespan considerably.

Geckos cannot intercourse until they are ten months old or mature enough. Sometimes, the breeders know the sex of their geckos even before the time of maturity. This happens because of the temperature before they hatch from their eggs. Generally speaking, the males have broader heads and relatively bulkier body. Leopard Geckos don’t show similar characteristics with regards to sex, and some will have highlighted traits. The most useful technique to identify the sex of a gecko is to have a look at their underside where the tail meets the midsection of the body. In males, at the back of thighs, there will be larger femoral pores as compared to the females. Moreover, preanal pores are more noticeable in the males and will be present in V-shape. In males, there will be a couple of Hemi penal bulges at the base of their tales which are not present in females. This is the easiest way to determine the sex of an adult gecko. 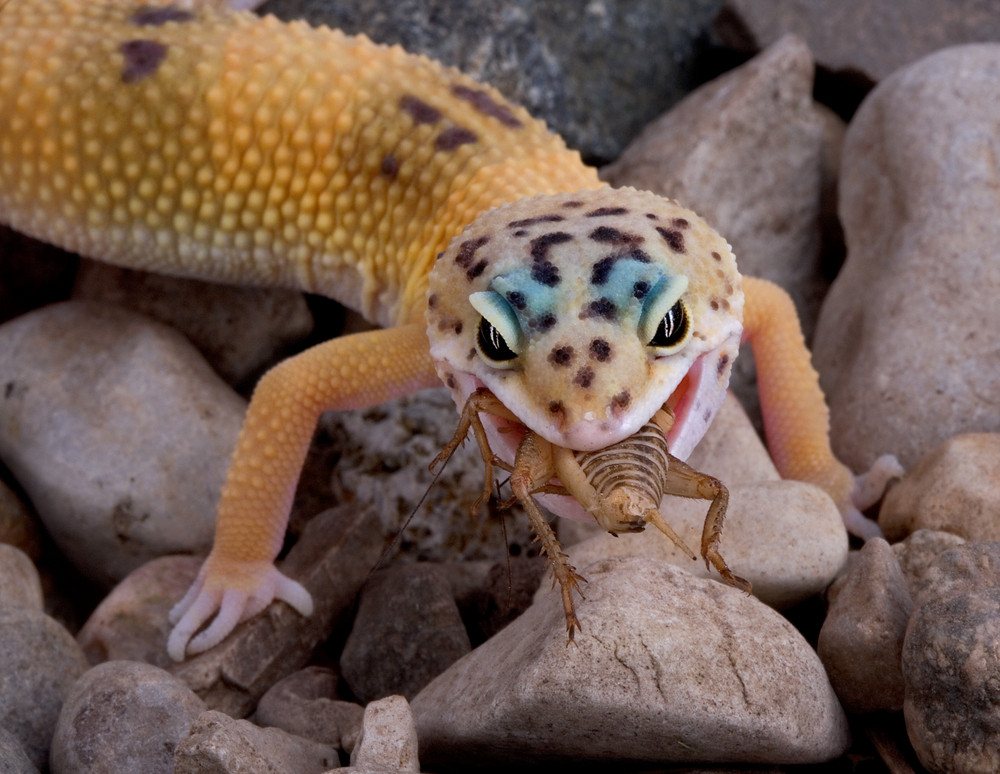 Normally, Leopard Geckos prefer to eat, roaches, crickets, mealworms, waxworms, hornworms, super worms and different types of other insects in the wild. Captive Leopard Geckos prefer to hunt and eat instead of eating dead. In captivity, crickets are the most common food source for them. Apart from crickets, mealworms and dubia roaches are among their favorite food sources. They have a wider tail base because Geckos store fat and water in their tails. When the food is scarce, they will take fat and water from their tails. To gather calcium and vitamin D, they hunt for spiders, ants, and moths. These lizards like to eat until they are full. In captivity, their food can be powdered with calcium and vitamin D so that they get a similar nutrition as they would get in the wild. They also have the tendency to develop metabolic water which is used during the times of scarce water conditions. These creatures do need all their nutrition when they are in captivity to cope with the common health problems. Sometimes the debilitated Leopard Geckos consume fine sand particles that can also cause health issues for them.

The ideally suited habitat for a Leopard Gecko is rocky deserts and very dry and sparse grasslands. This is precisely why they are found in dry regions of South Asia, including, Iran, Pakistan, Afghanistan as well as northwest India. Usually, winters are very cold in these regions and temperatures can drop down to 10°C or even lower. This forces the Leopard Gecko to go into semi-hibernation which is also known as brumation. During this period, it lives off on the fat and water stored in its tail. Leopard Geckos live a solitary life and spend most of the time in their burrows during daytime and come out at dawn or dusk. They prefer bright lights as part of their habitat. Recently a new gecko species has been found in Baja California, Mexico. These are eublepharine geckos which are wall climbing geckos and relates with the local herpetological group. 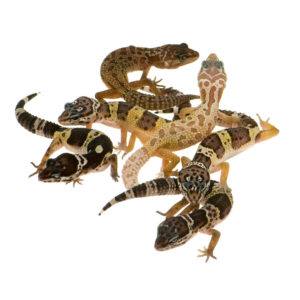 These are called giants because some of them reach the length of up to 13 inches and even more. These lizards way up to 170 grams as well. These geckos have very bright yellow colors, and they look fantastic. These are among the most common species for captivity purely because of their color and size. These are fat-tailed geckos.

These geckos come in a variety of colors which are mutation and are known as morphs. Due to these colors, these small lizards are very popular just like pet iguanas. As per some morph enthusiasts, the typical yellow with black spots is very boring. Leopard Geckos have over 100 different morphs, and breeders are introducing even more including high yellow, aberrant, hypomelanistic, super hypomelanistic, carrot tail, tangerine, Red-Eyed Patternless Tremper orange, lavender, Halloween mask, reverse stripe, super giant, baldy and much more. The price range of these geckos varies due to their colors and patterns. Some colors and shades are pretty hard to find, and they are sold at very high prices. However, you can expect a comparatively high price if you are looking at a gecko that not only has a beautiful color scheme but also has breathtaking patterns. Some geckos do have wide blackish bands as well with the dark tan background. The breeders feed them with specialized diets.

These Leopard Geckos are relatively small lizards having stripes that start from their heads to their tails and are usually very dark in color. Some of these lizards have red color stripes as well. Some of the kinds do have spots in patterns of lines running down their bodies. These are usually found in red, orange and yellow colors. These geckos are popular due to their bright color but are not expensive.

Albino Leopard Geckos don’t have any patterns, or their patterns are very dull, and usually, they are colorless or patternless. Some of them are Mack Snows, which are very solid eye color. Normally these geckos have very dull patterns, or their skin color is very light. Some of them also have dark spots which resemble to eclipse. Hence, they are known as eclipse albino. These geckos are very expensive especially those with different or rare patterns. 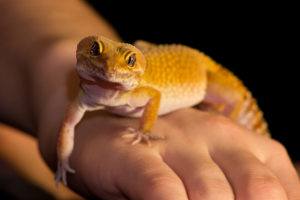 These creatures are one of the most popular lizard pets. These creatures are easy to maintain due to their small size, and for this, they require very minimal space. As they can live up to 20 or more years, they become the ideal choice for pet lovers. They serve very well as first pets for the people who don’t know much about reptiles. However, poor handling can shorten their lifespan. Leopard Geckos can breed for offspring of different coloring and patterns which are more suitable for the experience gecko owners. Like most other reptiles, a Leopard Gecko’s diet is not very complicated, and it only feeds on insects. These lizard pets are very mild mannered and can be handled without any issue if aggressive nature. Many people believe that Leopard Geckos have adapted to live in very harsh desert conditions with fierce daytime heat and this makes them tough. Due to this trait, they are equipped with the ability to live for weeks without water and food; and become very easy to maintain as pets.