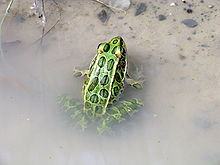 Now, there are quite a few different types of leopard frogs but the one which is definitely the most common is the northern leopard frog. With this in mind, we are going to take a look at the type and provide you with the most important information about it. What is more, we’ve also taken the liberty of providing you with quite some fun facts, which are certainly going to shock you. Now, without any further ado, let’s go right ahead and take a quick look.

Now, the first thing that needs to be said about the northern leopard frog is that it is a fairly large type of frogs. It could reach up to 11 cm which is absolutely considerable in comparison to other species. This is their snout to vent length. The colors of the frog are various but it can be dorsal, brown, green. The characteristic thing is that they have large dark and rather circular spots located on their backs, sides and on their legs. Every single spot is usually bordered by a ring which is known to be a bit lighter in color.

The truth is that northern leopard frogs are known for having a rather wide range of different habitats. As such, they can be found in permanent ponds, marshes, swamps as well as in slow-moving streams. Furthermore, they could also be seen in forests as well as in open and urban areas. If they would go to inhabit waters, they would prefer ones which have excessive and abundant aquatic vegetation. When the summer comes, they would move to grassy areas as well as lawns and abandon the water. They are also quite well adapted to colder temperatures and they could even be found at heights of up to 3,000 meters above the sea level.

Their diet doesn’t differ much from the diet of other types of frogs. As they grow up and become well-developed adults, the leopard frog is going to be on a diet of crickets, waxworms, silkworms and mealworms. On the other hand, they are herbivorous when still in the tadpole stage of their development.

Their range spreads quite a lot. In the USA, they spread from the Great Slave Lake as well as the Hudson Bay through Canada and south of Kentucky and New Mexico. What is more, the frogs are also found in Panama. It is endemic mainly to the actual central parts of the cordillera as well as the western lowlands of the Pacific areas. Even though it may be considered as an undescribed species there, it’s definitely inhabiting the area. They are known to occupy marshes, lakeshores as well as grasslands alike.

Now, when it comes to the northern leopard frog, it’s going to live up to four years if it’s in the wild. However, there is a tremendous amount of different factors which are going to impact this significantly. Right off the bat, the quality of the water that they live in is going to be substantially decisive when it comes to it. This is something that you might want to take into account. In any case, their average lifespan is said to be between 2 and 4 years. This is something which should be accounted for.

Their behavior is also not something which differs a lot in comparison to other types of common frogs. Of course, it’s rather impossible to compare it to, let’s say the poison dart frog as they are particularly different. However, in terms of behavior, in the summer hot periods, adults as well as juveniles are going to feed commonly in semi-open and open wet meadows as well as in areas with rather short vegetation or grass. This particular environment is usually located near water as this is where they usually seek cover. This is the main reason for which another very common name for the leopard frog is the “meadow frog”.

The northern leopard frog is also particularly renowned for being a very good pet. A 10-gallon tank of water is all that you need for one of these little buddies to live calmly. You can place a dense piece of wood in it. Make sure that some part of it is outside in order to provide the frog with an easy transition from the water to the land – this is something rather important. The depth of the water shouldn’t be less than 3 inches in order to provide the frog with a chance to burrow conveniently. You can use gravel on the aquatic side. However, make sure that you are using a smooth one in order to prevent any skin injuries and abrasions.

In any case, there are quite a lot of interesting things which could be taken into account when it comes to the leopard frog. There is even a genetic mutation amongst this particular species. The Burnsi leopard frog doesn’t have any spots thanks to it. The size of the animal is also going to vary based on the overall habitat that it is known to live in.

The important thing that you need to take into account is that all types of frogs are particularly important, regardless of whether you believe it or not and whether you think they are gross. They are the ones keeping the overly natural insect balance as they keep the population of harmful insects at bay. This is something which should be taken into account by homeowners.